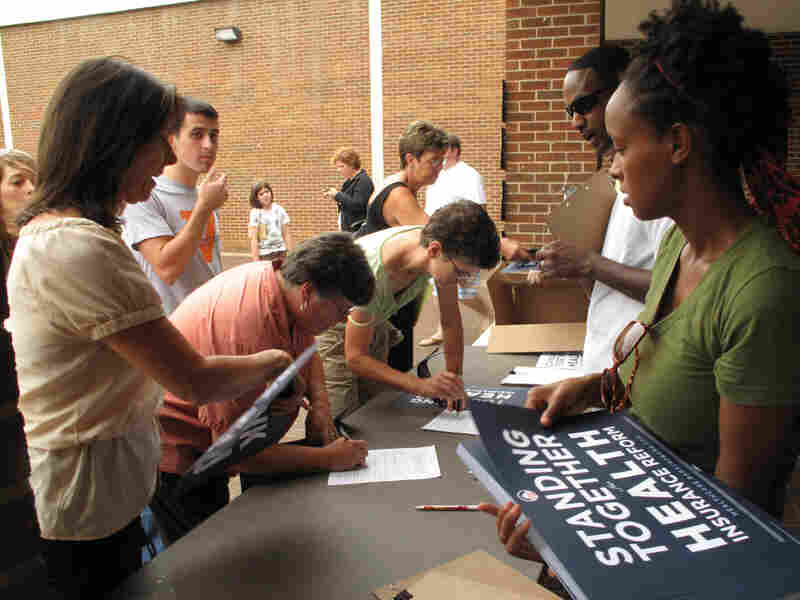 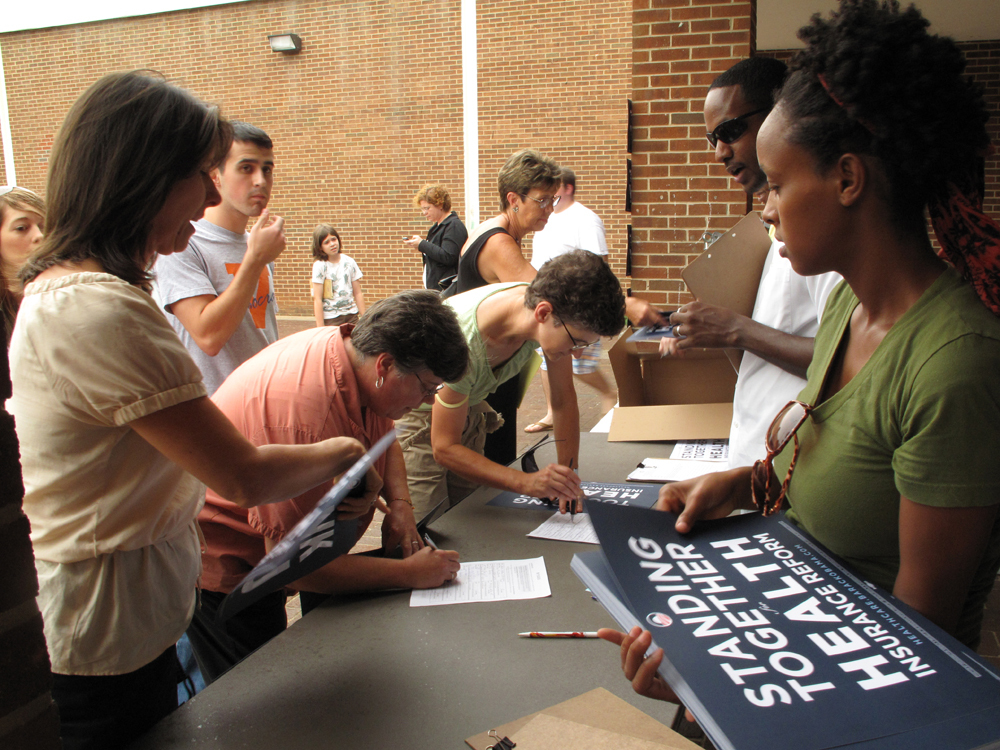 Volunteers from Organizing for America hand out signs and gather contact information from supporters outside a town hall meeting on health care hosted by Rep. Tom Perriello in Charlottesville, Va.

President Obama is getting his first taste of the fiery town halls that Capitol Hill lawmakers have been facing for the past two weeks. One such lawmaker is Tom Perriello, a freshman Democrat from the swing state of Virginia who is running a gantlet of 22 town hall forums this month.

Perriello on Tuesday attended his eighth town hall in a row, where NPR caught up with him. The event was remarkable for all the things it was not: It was not loud. It was not seething. No one was burned in effigy or arrested.

In fact, many people in the city of Charlottesville, Va., turned out in reaction to the images they have seen on TV or the partisan bickering that has erupted as a result of the debate on the trillion-dollar health care reform proposals.

Leslie Blackhall is a doctor and Kate Bailey is a nurse. They are on opposite sides of the health care debate.

"When I see Sarah Palin talking about people who are going to euthanize her baby!" said Blackhall. "I was shaking when I came in today, because I just feel so distressed at the level of debate here."

Bailey, meanwhile, had a different motivation for coming to the town hall.

"I was infuriated to hear people in our federal government say that, 'Oh, pooh pooh! This is all Astroturf [staged grass-roots activism]. People don't have enough sense to come out to these out of their own interest.' That just made me so angry that I had to come," said Bailey.

More than 1,000 people packed every seat in the Martin Luther King Jr. Performing Arts Center at Charlottesville High School, and many ended up in the aisles. The scene is similar to those in other parts of the country where town halls are being held — except some of those have involved arrests and at least one incident of a politician being burned in effigy.

House Speaker Nancy Pelosi (D-CA) has called the disruptive behavior of some of the protesters "un-American" and accused lobbyists of manufacturing protests.

But in Charlottesville, anti-health-bill protesters like Bill Hay are carrying their signs proudly.

"At first, it's like no one is paying attention to us," said Hay. "But when you have the speaker of the House saying stuff about us — they may not be saying good things about us, but at least they are noticing us. And if you are getting noticed, that's half the battle."

Hay is a member of the local anti-tax Tea Party group, which has been giving Perriello a tough time at his events all month. Since winning with the smallest margin of victory of any House member in 2008, Perriello has been taking heat from his conservative-leaning district for his support of the cap-and-trade environmental legislation and other bills. 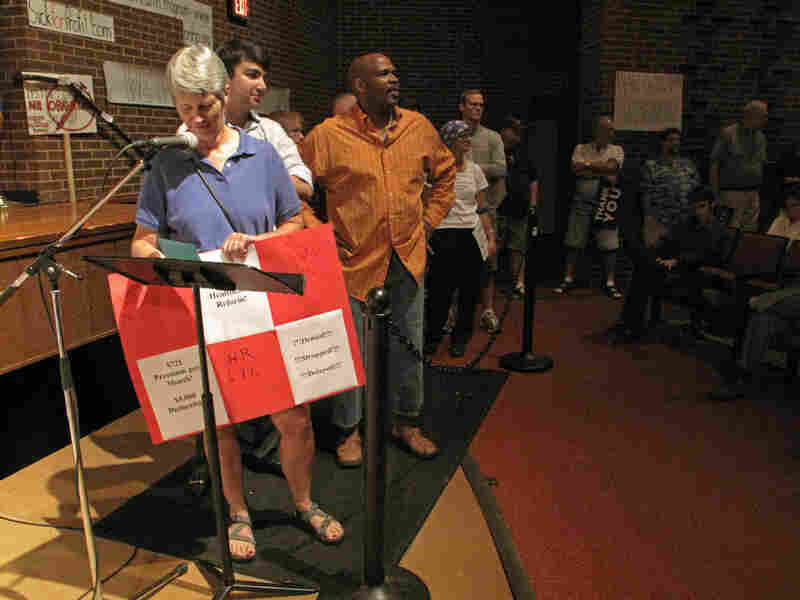 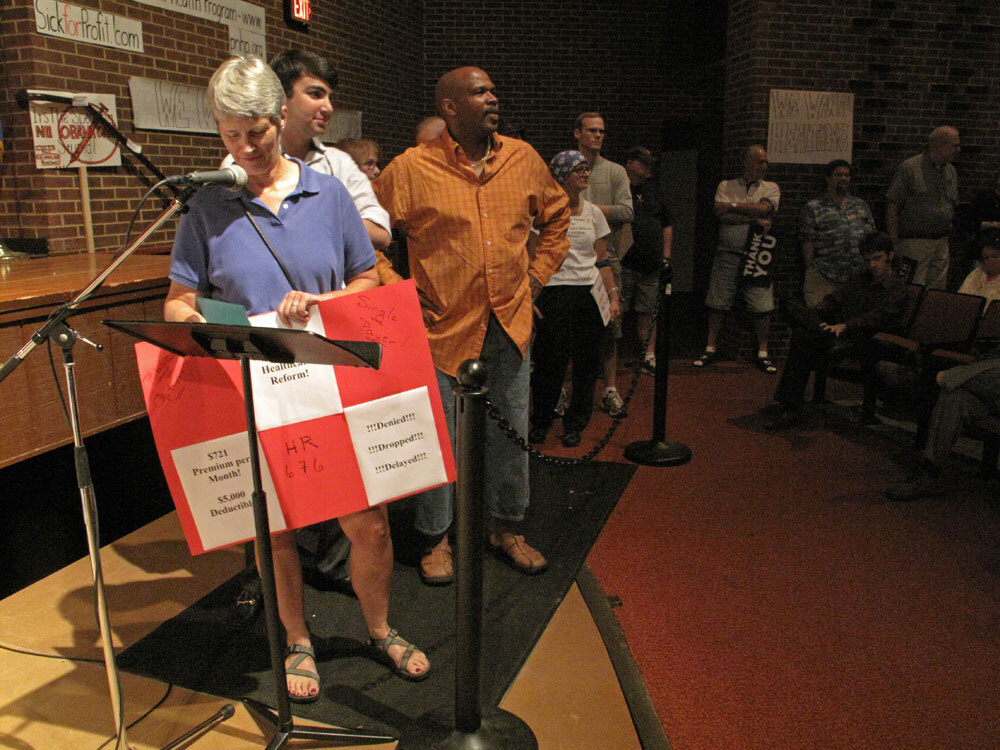 He has pledged to do town halls in every county of his district — more than 20. He has also met separately with Tea Party groups in his district, as well as with liberal advocacy groups.

Perriello says he doesn't mind if people blow off steam or raise their voices at him. He recommends that those who seek middle ground check out his smaller forums during the day.

He observes that the forums are a kind of political theater. "It's not a criticism of the town hall," says Perriello. "It's just noting that I don't think there are a whole lot of people who are coming here who have not already made up their minds."

This is a closely divided district, and the split of cheers and jeers over the course of the night suggested the forum was, too. Most of the questions from those who lined up for the microphone in this college town were mostly supporters of a new health care system — with interruptions from those who felt differently.

When one woman got up to defend the current health insurance system, loud boos erupted in the hall.

"Everyone, please give everyone a chance to speak," Perriello told the crowd.

He stayed sharp on his feet while answering dozens of questions for more than two hours. Then he sat down to meet individually with those who stayed for a chance to meet him one on one.

Perriello said he has yet to decide whether he will support any of the health care bills now moving through Congress.