Accessibility links
Time For Tiger Woods To Mind His Manners? As the superstar golfer heads into the last major tournament of the year, his attitude is getting some attention. His early exit from this year's British Open was less than gracious. Woods is known for being intensely focused and competitive, but some worry that his attitude is bad for the game. 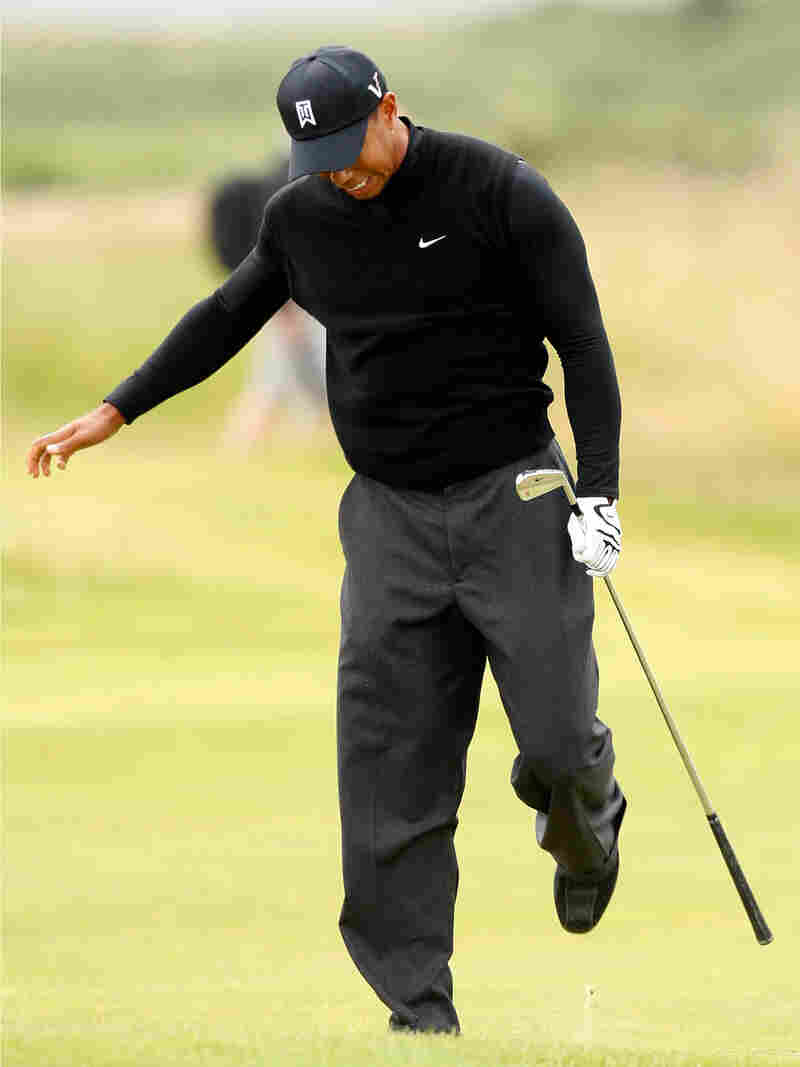 Tiger Woods reacts to his shot on the second hole during the second round of July's British Open golf championship held at the Turnberry links in Scotland. Peter Morrison/AP hide caption 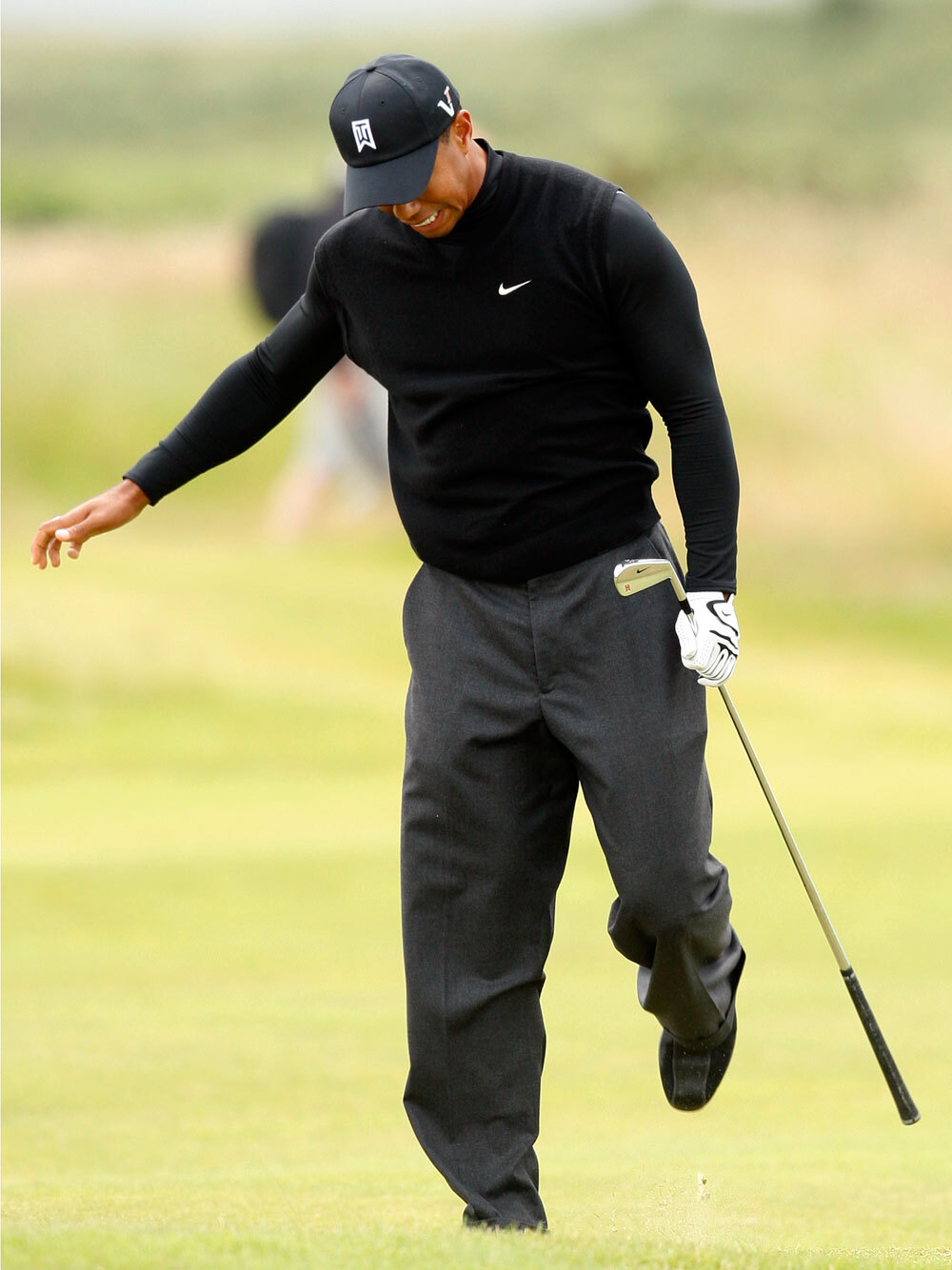 Tiger Woods reacts to his shot on the second hole during the second round of July's British Open golf championship held at the Turnberry links in Scotland.

The golf world is focused this week on Hazeltine National Golf Club in Minnesota, the site of the PGA Championship — the final major tournament of the year in men's golf and an event some are calling "Tiger's last chance."

Tiger Woods, the world's No. 1-ranked golfer, has won five tour events this year, but no majors, which have become Woods' measure of success. At last month's British Open, he didn't even qualify for the final two rounds. Woods' poor play in Scotland was punctuated by angry outbursts, which have become a Tiger trademark. For some, they've also become a tired act.

Woods turned pro as a 20-year-old, and over the past 13 years, we have watched him grow into a man who is master of his craft. But part of him has always been stuck in the "terrible twos." Golf announcers and fans have learned to cringe through Woods' profanity and thrown clubs when he makes mistakes, just as they've learned to marvel at his miracles.

So why wonder now whether it's time for Tiger to tame the tantrums?

Last month's memorable British Open ended after the 59-year-old Watson missed a short putt that would have clinched the title. He lost in an ensuing playoff. After all the disappointment that day, Watson still managed to smile.

The last image of Woods in Scotland was a bad tee shot in the second round, followed by a slammed club and profanity. The contrast with Watson's grace in defeat was too great for some journalists to ignore. ESPN's Rick Reilly wrote: "In every other case, I think Tiger Woods has been an A-plus role model. But this punk act on the golf course has got to stop."

In his story on the British Open, Sports Illustrated golf writer Michael Bamberger described the Woods outburst, but without judgment.

"As a reporter, I'm just trying to identify what he's like on the golf course," Bamberger says, "and it is very different from [Jack] Nicklaus and Tom Watson."

But not very different, Bamberger continues, from the legendary Bobby Jones when he was a young man.

"He was a club thrower of the highest order!" says Bamberger.

Jones eventually stopped throwing tantrums. Maybe Woods will, too, with age. But should he? Bamberger doesn't think it'll hurt Woods' legacy if he doesn't. Because, Bamberger says, the hissy fits are a byproduct of being one of the greatest athletes of any sport in the history of sport.

Woods, he says, is "an unbelievably driven person. I can't think of another golfer in which you see it to that degree."

But what about all those little Tiger wannabes out there? Doesn't a hands-off attitude toward Woods' behavior guarantee a generation of kids hurling F-bombs on the links?

Joe Lenac, a sports psychologist in St. Louis, doesn't exactly endorse Woods' bad language and thrown clubs, but he thinks Woods' sporadic meltdowns actually can be a teaching tool for controlled behavior. Part of his job is working with athletes on issues of sportsmanship and how to manage outbursts during competition.

"Most athletes would just melt down for the rest of the round," says Lenac, adding, "Tiger is so good. He blows up. He might slam the club, but then, on he goes, and he's back in the round. It's incredible."

Lenac also believes the angry explosions help humanize Woods, making him more like the average golfer who certainly feels rage at times playing such a vexing game. So as we watch Woods try to win his 15th major title this week at the PGA, maybe it's the critics who need to change — and accept Woods in those flashes when he morphs from the wildly wealthy and iconic "Tiger Inc." into Joe Six-Iron.