Accessibility links
Flavored Snacks From Pedrick's Keep A Family Happy Fresh fruits and vegetables may lure us to roadside stands, but it's hard to leave without stocking up on the weird regional snacks you can also find there. And if you're headed up to California's Sierra mountains, the best place to get your fix is at Pedrick Produce.

Fresh fruits and vegetables may lure us to roadside stands, but it's hard to leave without stocking up on the weird regional snacks you can also find there. And if you're headed up to California's Sierra mountains, the best place to get your fix is at Pedrick Produce. 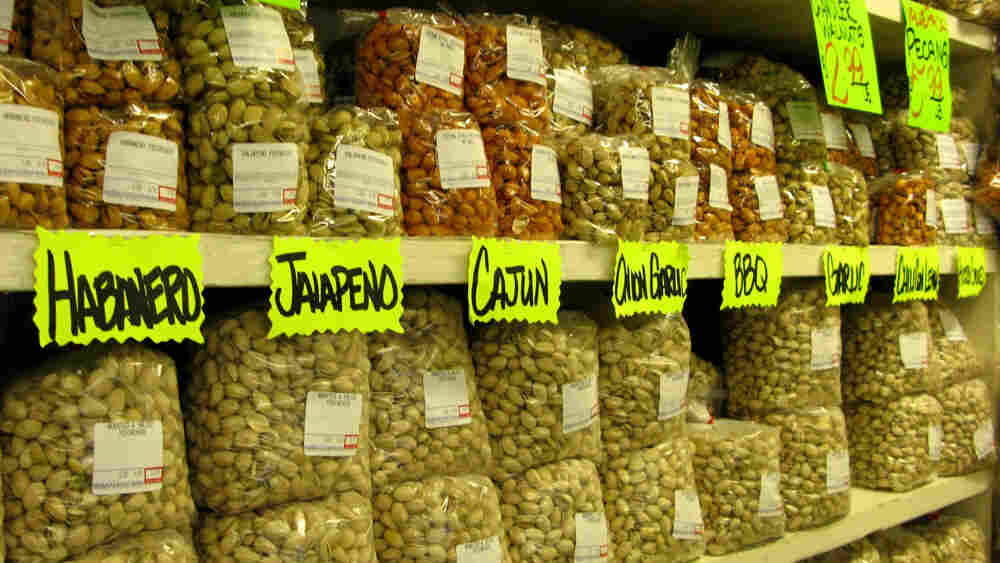 Some of the many varieties of pistachios available at Pedrick Produce in Dixon, Calif. Larry Abramson/NPR hide caption

All summer we've been chronicling the delights offered by local produce stands from fiddleheads to peaches to pluots - that's a combo of plum and apricot. It's fresh fruits and vegetables that lure us to roadside markets, but let's be honest: it's hard to leave without stocking up on a few weird snacks as well.

NPR's Larry Abramson gets his fix at Pedrick's Produce in Dixon, California.

LARRY ABRAMSON: Pedrick's location is not scenic. This barn of a produce stand lies hard by Interstate 80. It is surrounded by the mega-farms of the Sacramento Valley. But it's an easy stop on the way to the cabin my in-laws share in the California Sierra. We stock up at Pedrick's - fruit, vegetables and flavored pistachios.

ABRAMSON: Henry Barraza, Pedrick's owner, has a big smiling face with a head of thick, gray hair. This is the man who has fed my family's snack habit for decades. Out biggest sin: pineapple-honey or coffee-flavored almonds. Every year as vacation ended, the supply would dwindle and my wife would try to ration these delicacies but they often disappeared during midnight raids.

I can't imagine the temptation that Pedrick's workers, like Angelica Grigsby, face every day.

ABRAMSON: Are they your downfall?

ABRAMSON: Grigsby is only 20 but she's already been at Pedrick's for five years, thanks to good connections to management.

Ms. GRIGSBY: Henry's my godfather, and…

ABRAMSON: Those connections contribute to the family feeling here. But at bottom, Pedrick's is still a business.

Mr. BARRAZA: (Unintelligible) stacked in the corner to make it look pretty.

Jose Jimenez has spent half of his 34 years at Pedrick. He's stacking a mountain of corn with a casual precision that leaves it looking like an intricate jigsaw puzzle. The price: four for a dollar. Henry Barraza says he has to keep the price low to compete with other stands.

Mr. BARRAZA: We're not making anything on those ears of corn, but you can go out and for a dollar, you can feed a family of four. You know, that'll be one of the items you could put on your plate and where else could you do that?

ABRAMSON: Those corn customers might grab a bag of something that's more profitable, like those flavored nuts. And you never know when that purchase will turn an accidental visitor into a lifetime customer.

WERTHEIMER: You can explore our other farm-fresh foods at the new NPR.org. You'll also find recipes in our Kitchen Window series.