Accessibility links
The Learning Curve of Gratitude After suffering a life-threatening illness, singer-songwriter Mary Chapin Carpenter had time to reassess her priorities. She came to believe in more fully appreciating the blessings each day brings.

Listen
The Learning Curve of Gratitude 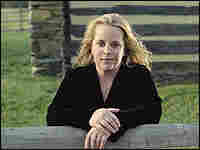 Mary Chapin Carpenter is a five-time Grammy Award winning singer-songwriter. She has produced 11 albums in her 20-year career, including "The Calling," released in 2007. Carpenter and her husband live near Charlottesville, Va. Traci Goudie hide caption

I believe in what I learned at the grocery store.

Eight weeks ago, I was released from the hospital after suffering a pulmonary embolism. I had just finished a tour and a week after returning home, severe chest pain and terrible breathlessness landed me in the ER. A scan revealed blood clots in my lungs.

Everyone told me how lucky I was. A pulmonary embolism can take your life in an instant. I was familiar enough with the medical term, but not familiar with the pain, the fear and the depression that followed.

Everything I had been looking forward to came to a screeching halt. I had to cancel my upcoming tour. I had to let my musicians and crew members go. The record company, the booking agency: I felt that I had let everyone down.

But there was nothing to do but get out of the hospital, go home and get well.

I tried hard to see my unexpected time off as a gift, but I would open a novel and couldn't concentrate. I would turn on the radio, then shut if off. Familiar clouds gathered above my head, and I couldn't make them go away with a pill or a movie or a walk. This unexpected time was becoming a curse, filling me with anxiety, fear and self-loathing — all of the ingredients of the darkness that is depression.

Sometimes, it's the smile of a stranger that helps. Sometimes it's a phone call from a long absent friend, checking on you. I found my lifeline at the grocery store.

One morning, the young man who rang up my groceries and asked me if I wanted paper or plastic also told me to enjoy the rest of my day. I looked at him and I knew he meant it. It stopped me in my tracks. I went out and I sat in my car and cried.

What I want more than ever is to appreciate that I have this day, and tomorrow and hopefully days beyond that. I am experiencing the learning curve of gratitude.

I don't know if my doctors will ever be able to give me the precise reason why I had a life-threatening illness. I do know that the young man in the grocery store reminded me that every day is all there is, and that is my belief.

Tonight I will cook dinner, tell my husband how much I love him, curl up with the dogs, watch the sun go down over the mountains and climb into bed. I will think about how uncomplicated it all is. I will wonder at how it took me my entire life to appreciate just one day.