Accessibility links
Economists Say Recession May Be Over The Federal Reserve on Wednesday held interest rates steady, kept other stimulus measures in place and, in a sign of hope, said the economy was stabilizing. These steps and other signs are leading a growing number of economists to say they think the recession is finally over. 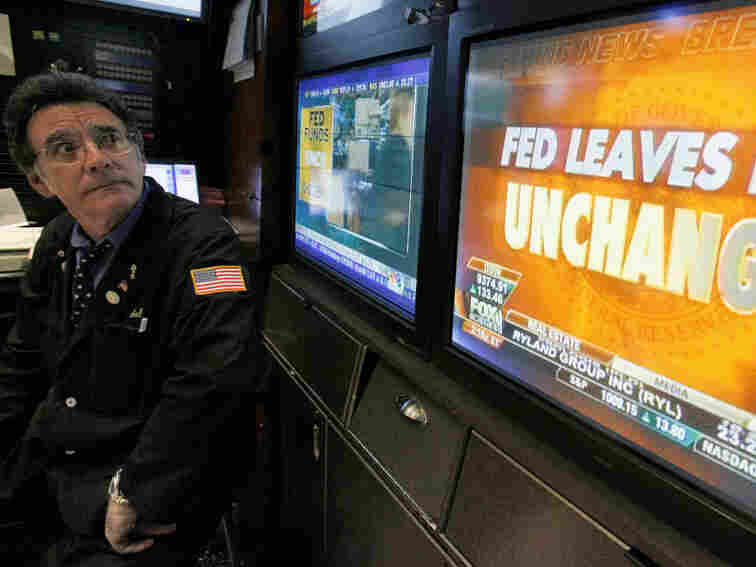 Many economists say the Fed's recent moves to defibrillate the seized-up financial system have paid off. Richard Drew/AP hide caption 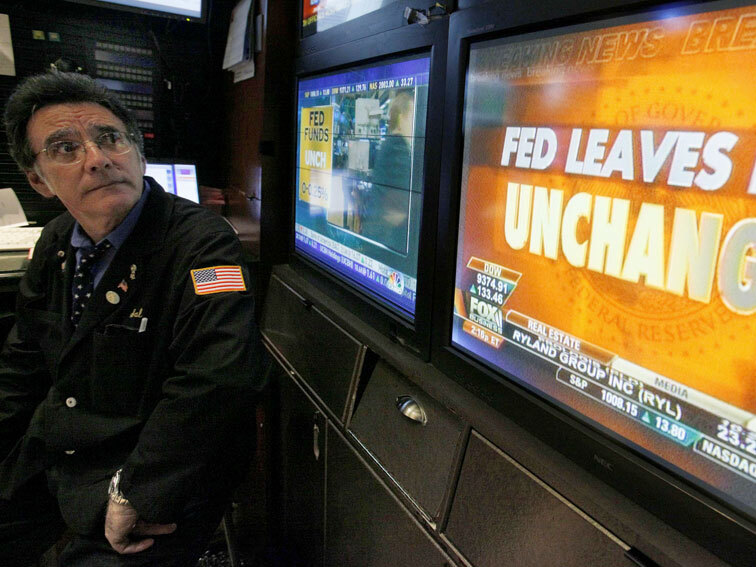 Many economists say the Fed's recent moves to defibrillate the seized-up financial system have paid off.

The Federal Reserve on Wednesday held interest rates steady, kept other stimulus measures in place and, in a sign of hope, said the economy was stabilizing.

A growing number of economists now say they think the recession is finally over — by that they mean the economy is starting to grow again.

Stuart Hoffman, chief economist of the major regional bank PNC Financial Services Group in Pittsburgh, says just this past winter he was more worried than he ever had been in his career. "Markets weren't functioning, banks couldn't get credit, the stock market was falling every day," he says.

The U.S. was also losing 700,000 jobs a month and there were fears the economy was getting caught in a downward spiral with no clear way out in sight.

This spring and summer, Hoffman says, government efforts to avert the crisis began to get more traction. A series of reports have been showing an economy that is pulling out of that downward spiral: Home sales are rising again. Job losses aren't nearly as bad. People are buying more cars.

Hoffman says the fiscal stimulus is starting to take hold, and the U.S. has successfully avoided what could have been a full-blown depression. "I would make the bold statement that I agree with the majority of my colleagues, my fellow economists, that the recession is ending this summer," he says.

Hoffman was part of a group of 47 economists who were just surveyed by The Wall Street Journal; most said the recession is now over.

The Federal Reserve on Wednesday, in a closely watched statement, said economic activity is "leveling out."

Not Out Of The Woods

Nariman Behravesh, chief economist at IHS Global Insight, says while the Fed is seeing evidence that the economy has stabilized, it also said household spending is being constrained by job losses, tight credit, lower housing wealth and sluggish income growth. A separate report out Thursday shows foreclosures continuing to rise despite government efforts to prevent them. That puts more downward pressure on home prices.

"We're not completely out of the woods yet, so the Fed is keeping all its options open," Behravesh says. He says the Fed is signaling that it is going to stay the course until it is quite confident that the recovery "has legs; that it's self-sustained."

Over the past year, the Fed has pulled out all the stops to defibrillate the seized-up financial system. It has pumped huge amounts of money into financial firms, bought mortgage-backed securities and is doing other things to push down interest rates for both average people and big companies. Behravesh says all that has paid off.

"It has averted Armageddon," he says.

Behravesh says the U.S. didn't see "Depression 2.0," so the Fed really did avert a very bad scenario by doing what it did.

Also Thursday, a report on the U.S. trade deficit showed that countries around the world are buying more American products again, a sign that economies elsewhere are recovering. Hoffman says there is another factor: psychology. He says that seems to be stabilizing, too.

"I often refer to that as the yeast," he says, meaning these stimulus efforts by the Fed are the ingredients that help the economy rise. "I'm not a baker, but I'm told you need a little bit of yeast."

Hoffman says a change in consumer and business psychology is crucial because "at the end of the day, while the economy is about economic policies, it's also about people," and people's emotions still drive the investments that they make.

Almost nobody is predicting a quick recovery. Home prices are likely to keep sliding this year. Unemployment is expected to remain quite high through 2010. Hoffman says job growth is always the caboose on the end of a recovery. But, at least, the economic train appears to be back on its tracks and moving forward again.