Accessibility links
Bold, Experimental 'Asterios' Expands Graphic Genre David Mazzucchelli's audaciously innovative Asterios Polyp is already on its way to becoming one of the most critically acclaimed graphic novels of this or any year.

Note: There is material in this excerpt some readers may find offensive. hide caption 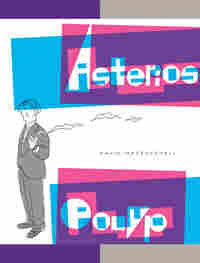 Show someone a copy of Asterios Polyp and their reaction, upon skimming a page or two of David Mazzucchelli's deceptively simple, yet supremely innovative graphic novel, might be, "So why all the fuss?"

It's true, there's a throwback element to the way Mazzucchelli embraces the open, highly stylized character design of '50s-era cartoons — you can almost imagine his titular hero tossing off bon mots in an old Bennett Cerf joke book or popping up in the background at one of those cocktail parties Dennis the Menace's parents used to throw.

And yes, the book has garnered a remarkable amount of attention — Asterios Polyp was released just over a month ago, but is already on its way to becoming one of the most critically acclaimed graphic novels of this or any year.

One reason for that: We've been waiting a while. Mazzucchelli made his bones in the '80s as the artist on Daredevil and Frank Miller's seminal Batman: Year One, where he brought a textured humanity to the superhero milieu. His heavy linework and use of shadow accentuated every unsavory detail of Gotham's grimy urban hellscape, every crease and bloodstain of the Bat-costume.

A graphic novel adaptation of Paul Auster's City of Glass followed, along with shorter pieces in various alt-comics anthologies, but he turned to teaching as he strove to finish what would become Asterios Polyp, his first full-length work. Now, after nine years of relative silence, it has finally arrived, and nothing we've seen from him before could have prepared us for it.

It's the book's sheer audacity of form that has critics and fellow creators hailing its arrival. Mazzucchelli knows exactly what he's doing with that clean, cartoony style and his generous use of white space — he's inviting the eye, drawing the reader in. And once that happens, it doesn't take long for Asterios Polyp to reveal itself as a daring experiment that succeeds without seeming experimental, a multi-layered read that uses every tool available to the comics artist to engage us on a deep, intuitive level.

"What if reality (as perceived) were simply an extension of the self?" asks the narrator early on, and it's that heady question that Mazzucchelli proceeds to answer over the next 300 pages. Or rather, he shapes the visual world around his characters so that the answer to that question resolves steadily, unmistakably into focus.

Asterios Polyp is an architect who has built a successful academic career on the power of his theories alone. Casually arrogant and infatuated with the notion of duality — he is never happier than when imposing his simplistic, black-or-white worldview on others — Asterios finds his New York City apartment destroyed by a lightning strike. What happens next, as he leaves his old life behind and builds a new one in a small Midwestern town, is the familiar stuff of contemporary literary fiction — how it happens, however, is what makes Asterios Polyp such a singular creation and a quintessential example of what the graphic novel — and only the graphic novel — can do.

In flashbacks, we see Asterios blithely asserting his dualistic understanding of the world to anyone who'll listen. All the while, with every page, Mazzucchelli uses form, color, line and even the differing fonts of characters' word balloons to tweak his protagonist's beliefs, to both confound and enrich the man at every turn.

Asterios, for example, is drawn with a crisp, exacting blue line; his wife Hana emerges out of rough, red, solid shapes. During their courtship, Mazzucchelli allows man and woman to take on shades of each other's color and aspects of each other's form. As their relationship deteriorates, both revert to their original designs and reshape the very page around them, reflecting their anger and hurt.

It should feel schematic, even airless, but because Mazzucchelli's approach is so bracingly playful throughout, Asterios Polyp is a fast, fun read. It's also a work that has been carefully wrought to take optimum advantage of comics' singularly hybrid nature. Asterios Polyp is all the more remarkable because the achievement it represents is so delicate and ephemeral — it's a tale that could only be told on the knife-edge where text and art come seamlessly together. 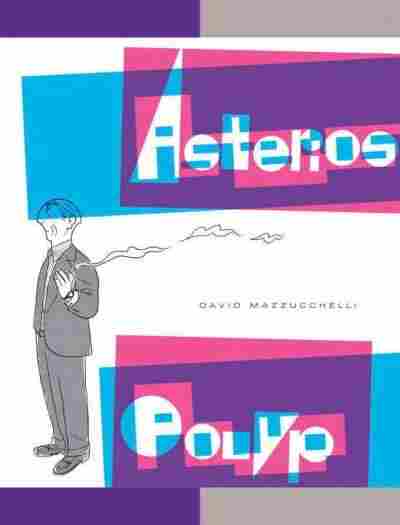