From the Grand Theatre of Geneva

When Jacques Offenbach began writing The Tales of Hoffmann, in 1877, he hoped the opera would boost his reputation to a whole new level. It did exactly that — but unfortunately, the composer never lived to see it.

In the first of Hoffman's three tales, he falls for Olympia, a mechanical doll that must — literally — be wound up to deliver a treacherous, coloratura aria known as the "Doll's Song." Soprano Patricia Petibon sings it in the Geneva production.

The last of Offenbach's three tales begins with the opera's most famous melody, a gentle barcarolle, sung by Stella Doufexis as Nicklausse and Maria Riccarda Wesseling as Giulietta. 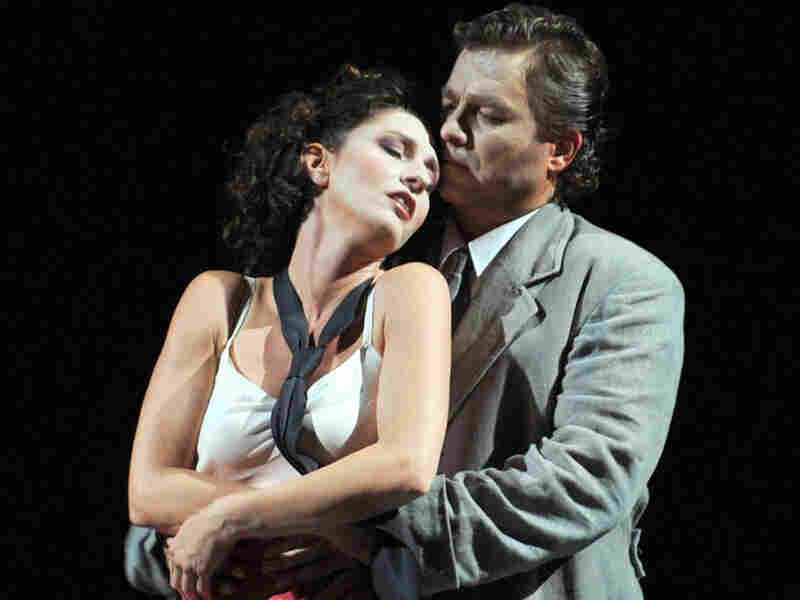 Tenor Marc Laho stars in the title role, with mezzo-soprano Stella Doufexis as his Muse, in The Tales of Hoffmann from Geneva. GTG/Isabelle Meister hide caption 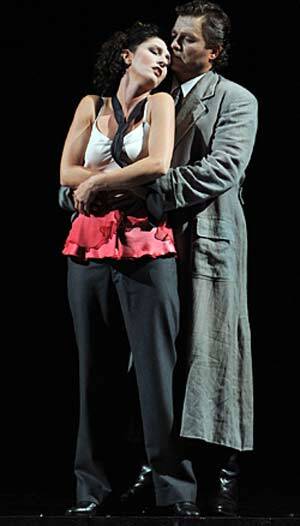 Tenor Marc Laho stars in the title role, with mezzo-soprano Stella Doufexis as his Muse, in The Tales of Hoffmann from Geneva.

During his lifetime, Offenbach became world famous as the composer of operettas — often lightweight comedies, boasting scores of catchy tunes that have often outlived the works they were written for. The prime example is the ubiquitous "Can-Can" from his operetta Orpheus in the Underworld — a number that tosses out three or four instantly recognizable melodies, all within the space of about ninety seconds.

Still, despite his fame, Offenbach wanted to be known for more than just his frothy operettas, and hoped the Tales of Hoffmann would establish him as a recognized master of serious opera.

The opera is based on a play by the writers Jules Barbier, who wrote the opera's libretto, and Michel Carre. The play takes the real life German poet, E.T.A. Hoffmann, and makes him a character in some of his own, fanciful stories. Offenbach's drama follows the same scheme, placing the title character into three, fanciful stories of failed love. The result is one of the grandest and most expressive of all 19th-century French operas — achieving a combination of emotional depth and musical brilliance that only the finest opera composers ever equaled.

The Tales of Hoffmann was scheduled for a premiere at a Paris theater called the Gaite-Lyrique — during its 1877-78 season. When that theatre suffered budget cutbacks, Offenbach continued work on the opera — now intended for another theater, the Opera-Comique. But Offenbach died in 1880, while the production was still in rehearsal, leaving the score incomplete.

Over the years, all the way to the 1980s, scholars continued to find manuscripts for the opera that were left behind, and many different versions of the score have been assembled. But despite those difficulties, The Tales of Hoffmann has long been one of the most popular operas in the standard repertory.

On World of Opera, host Lisa Simeone presents Offenbach's magnum opus in a production from the Grand Theatre of Geneva. The title character is played by Tenor Marc Laho. Hoffmann's three loves are sung by three different sopranos — Patricia Petibon, Rachel Harnisch and Maria Riccarda Wesseling — while the triple villain roles are all sung by bass-baritone Nicolas Cavallier.

The Story Of 'The Tales Of Hoffmann' 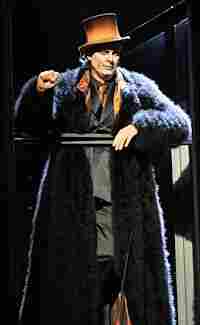 Offenbach's opera is in five acts, with first and last acts serving as a prologue and epilogue. 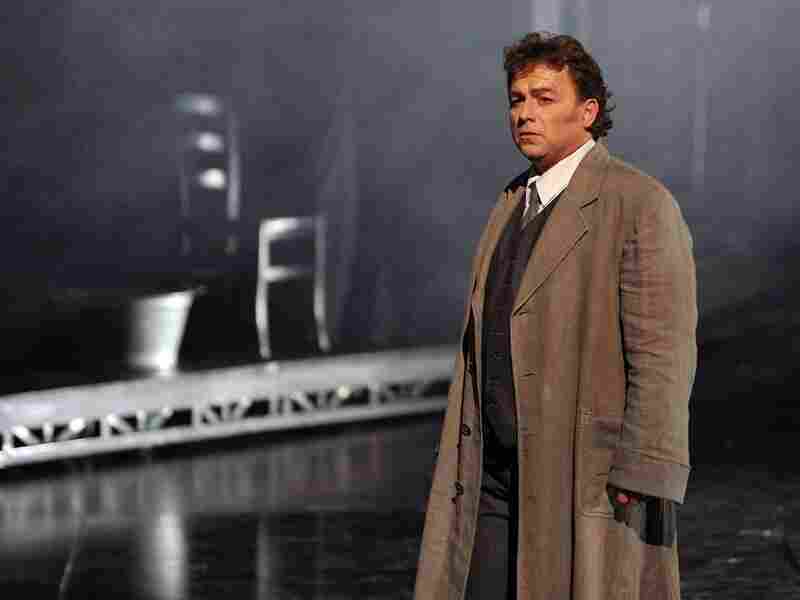 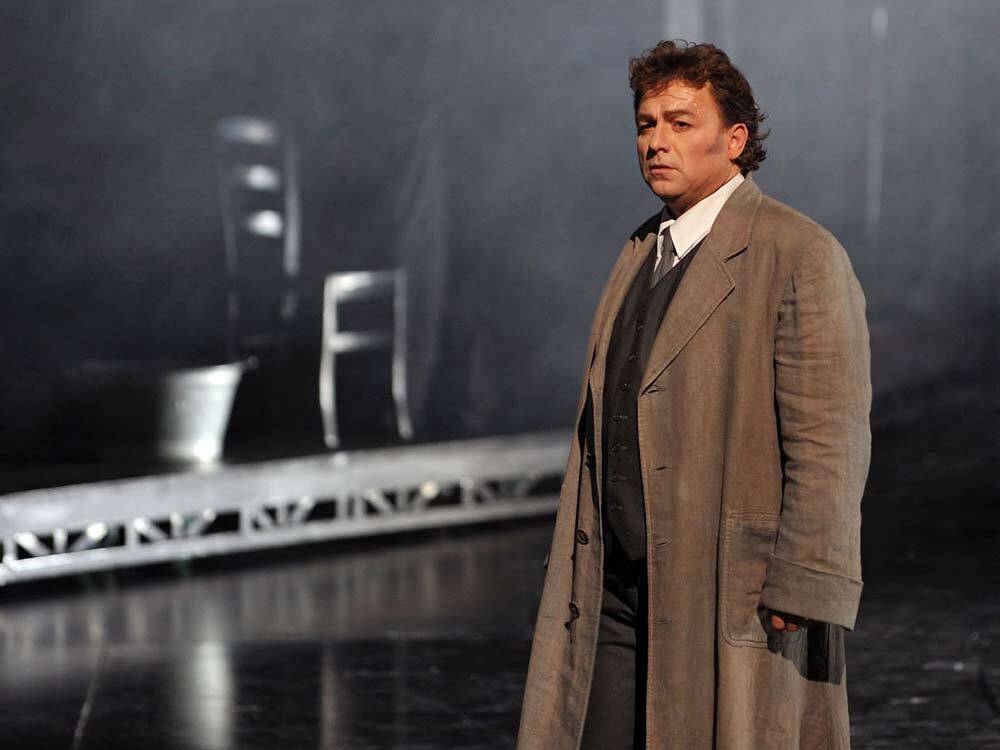 In ACT ONE, Hoffmann is drinking in Luther's tavern, near the opera house in Nuremberg. As always, he's accompanied by his muse, who wants to cure the poet of his unhappy love for Stella, a beautiful singer. The muse then takes the identity of the poet's student friend Nicklausse. We also meet a counselor called Lindorf — Hoffmann's rival for Stella's love.

The crowd at the tavern knows Hoffmann's skill at storytelling, and he entertains them with the tale of Kleinzach, a legendary dwarf. But Hoffmann is preoccupied by romance, and his mind keeps wandering into thoughts of beautiful women he has loved. The crowd decides to humor him, and wants to hear all of his love stories. Hoffmann agrees, and everyone settles down to listen.

The first story is told in ACT TWO. Hoffmann has fallen for Olympia, the daughter of an inventor named Spalanzani. But this "daughter" is actually one of Spalanzani's inventions: a mechanical doll. Spalanzani is expecting a house full of guests, and plans to introduce his new invention to the public. But he's worried about one guest in particular, a gadget-maker named Coppelius who provided Olympia's eyes. Spalanzani is afraid Coppelius will want a percentage of the action. He decides to buy him out, and writes Coppelius a check.

When all the guests have assembled, Spalanzani trots out Olympia, winds her up, and puts her through her paces. The doll can even sing, and comes up with a coloratura aria — but she slows down every now and then, and has to be rewound. Hoffmann is so in love with her that he doesn't notice.

But the jig is up when Coppelius returns. Spalanzani's check has bounced, and Coppelius gets even by destroying Olympia. At first, Hoffmann is horrified, watching as the woman he loves is torn limb from limb. Then he realizes what's really happening, and the guests all mock him as the act ends.

In ACT THREE, Hoffmann is love with Antonia, a beautiful young woman suffering from a serious illness. She lives with her father, Crespel, and their house is filled with musical instruments, which Crespel makes himself. There's a place of honor reserved for a picture of Crespel's dead wife, Antonia's mother.

Antonia is at the piano and begins to sing a sad song, but Crespel rushes in to stop her. Though Antonia loves singing, the exertion is dangerous for her, and threatens her life.

Crespel leaves again, and against his wishes, Hoffmann and Nicklausse come to pay Antonia a visit. She and Hoffmann sing together, declaring their love. When Crespel returns, Antonia runs to her room. Hoffmann hides, and overhears a heated conversation between Crespel and Dr. Miracle, who has come to treat Antonia. The doctor also treated Antonia's mother, and Crespel thinks Miracle was responsible for her death.

When the two men leave, Hoffman goes to Antonia and persuades her to stop singing. But when Hoffmann has gone, Miracle returns. He calls for Antonia, and somehow conjures the voice of her mother, which seems to emanate from the dead woman's portrait. Taking up one of Crespel's violins, Miracle urges Antonia to sing along. She does, but the stress is too much for her, and she collapses. Hoffmann and Nicklausse rush back into the house just as Dr. Miracle pronounces Antonia dead.

ACT FOUR takes place in Venice, and begins with Hoffmann on the balcony of a palace, overlooking the Grand Canal. Below, Nicklausse and the glamorous courtesan Giulietta are floating in a gondola. Hoffmann listens as the two sing a gentle barcarolle, the opera's most famous melody.

Inside, there's a lively party going on, and Hoffmann encounters Giulietta. He's been falling in love with her, despite warnings from Nicklausse. Giulietta already has a lover, a man called Schlemil, but that seems to make her even more attractive to Hoffmann.

Before long, we meet this story's villain, a magician named Dapertutto. He makes Giulietta a tempting offer. Dapertutto promises her a diamond ring if she'll bring him Hoffmann's "other self" — that is, if she can steal his reflection. Giulietta agrees, and goes into action.

She takes Hoffmann into another room. He finds her irresistible, and the two sing a rapturous duet. Giuletta asks Hoffmann for his reflection, as a keepsake. He agrees, and immediately discovers that he can no longer see himself in the mirror. Schlemil then bursts in, surprising the lovers. Giuletta runs off to hide in her private room. Schlemil challenges Hoffmann to a duel and is killed.

Hoffmann finds the key to Giulietta's room on a chain around Schlemil's neck. But when he opens her door, he finds her in a passionate embrace with a servant, Pitichinaccio. Dapertutto breaks into a sinister laugh, as Nicklausse drags Hoffmann away.

ACT FIVE is a brief epilogue. We're back in Nuremberg, at Luther's tavern, and Hoffmann has finished his sad stories. He orders more wine, to dampen his memories. Then Stella appears, fresh from a triumphant night at the opera, and approaches Hoffmann. But when he looks at her, he's reminded of the three lovers he lost in his stories, and he turns her away. Unperturbed, Stella leaves with Hoffmann's rival, Lindorf.

Nicklausse stays with Hoffmann, and again becomes the poet's muse-- urging Hoffmann to go back to his writing, and saying that sorrow will make his poetry all the wiser.