Accessibility links
Listening To Woodstock, 40 Years Removed Is it true that there was no good music at Woodstock? Critic Ed Ward considers the evidence. 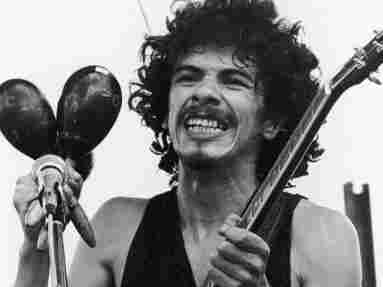 A friend of mine who was there, hearing that I was writing about the Woodstock anniversary, said, in no uncertain terms, "There was no good music at Woodstock." After listening to most of Rhino Records' six discs of the Woodstock box, plus Sony Legacy's CD sets of what were then the current albums by the Jefferson Airplane and Sly and the Family Stone, I can't quite agree, but I do see what he meant. And I don't think we can blame the famous brown acid, the flat blue acid, the green acid or any of the other drugs for it — not directly.

Some of the problem was technical: The sound system was cobbled together from movie-theater systems, which was the best they could do at the time. The bands couldn't hear themselves too well in the monitors, and there were lots of outages.

Another part of the problem wasn't as simple, but is glaring today: A lot of the talent was substandard. In short, Woodstock substituted quantity for quality, on the basis of what we can hear today.

The entire first day was almost a total disaster. Richie Havens, called into service to open when the band scheduled to open, Sweetwater, had yet to show up, did a yeoman job, but then Sweetwater showed up and played an incoherent mish-mash of flute and chick-vocal-led junk. They were followed by the now-forgotten Tim Sommer, whose lightweight songs and voice are entirely unmemorable. Tim Hardin followed him, sounding asleep — or, more likely, stoned — and then Ravi Shankar came on and did a couple of showy numbers of the sort he knew hippies liked. He was followed by the worst act of the day, Melanie, whose grating, whining voice delivered, among others, a song called "Beautiful People" with lyrics like "You take care of me, maybe I'll take care of you." Thanks, Mel. The day ended, finally, with professional sets from Arlo Guthrie and Joan Baez.

The next day really typified the festival, starting off with another forgotten band, Quill, going to a folkie set by Country Joe McDonald, and then a band on its way up, Santana, whose Latin-rock fusion led the way for the second generation of San Francisco bands. I've never liked them, but their passion is obvious. Next, John Sebastian provided more folkie sweetness, and then came Keef Hartley, a British drummer with a blues band who has never allowed his set to be used on film or record. He was followed by the Incredible String Band, British psychedelic folkies whose best work was far behind them, after which came another harbinger of the 1970s, Canned Heat, who not only provided 28 minutes of something called "Woodstock Boogie," which I declined to experience, but who also, according to sound man Chip Monck, "fried the amps."

Mountain was next, with a proto-metal act complete with portentous lyrics, and then the Grateful Dead, one of the few bands at the height of their powers at the time they performed, with a set Deadheads don't really consider very good. The best was yet to come, although it was getting late: Creedence Clearwater Revival apparently didn't know there were a half-million people there and did their usual tight set to the darkness and flew back out. After that came Janis Joplin, who was apparently channeling a chicken. Following her came one of the few really historic sets at Woodstock, as Sly and the Family Stone came on and delivered a dose of show-biz at 3 a.m. And after them, the Who managed to play "Tommy" — yet another foretaste of the worst impulses of the 1970s.

Had I been there, I would have stuck around until the next morning to see one of my then-favorite bands, the Jefferson Airplane, and I would have been disappointed. The band, apparently heavily dosed on orange acid, battled the sound system and each other to a truce over nearly two hours, a set that left me tense, listening to it 40 years later. Then, I probably would have left, missing a surprisingly good set by Joe Cocker, Ten Years After's legendary guitar excess — which has been withdrawn from the reissues — Crosby, Stills, Nash and Young, a terrible version of the Paul Butterfield band, the execrable Sha Na Na's camped-up doo-wop and, finally, Jimi Hendrix battling a new band he'd thrown together for the occasion and dumped almost immediately afterwards.

Excess, histrionics, and pretension: Those were the coming trends at Woodstock. Peace, love, and music, the supposed drawing cards, would soon seem quaint relics of a bygone era.

Ed Ward lives in the south of France.