Accessibility links
'Mad Men' Returns, With A British Invasion When last we saw the ad men and women of AMC's Mad Men, the firm had just been bought by a British company and the Cuban missile crisis was underway. Critic David Bianculli offers a sneak peak at what additional drama the new season might hold. 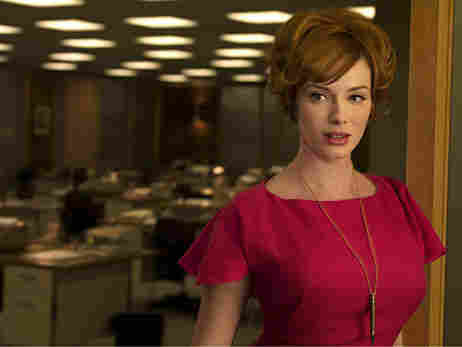 There was plenty of suspense in the cliffhanger that ended AMC's Mad Men's Season 2. Sterling Cooper had been bought by a British firm, and Don Draper had walked away, unhappy with the company's newly appointed president and unsure whether he would return after the weekend. When he got home, his wife dropped the bomb that she was pregnant. And speaking of bombs, all of this took place during the Cuban missile crisis of 1962, when the world was on the brink of nuclear annihilation.

But if that's not enough suspense for you, series creator Matthew Weiner always manages to generate more. He doesn't begin a new season precisely where the old one left off, so as a new year of Mad Men begins, there's always the question: Is it a new year? If we left off in 1962 during the missile crisis, where will we pick up? He wouldn't leapfrog over the 1963 John F. Kennedy assassination, would he?

The answer comes very early in Sunday's premiere episode, so it's not exactly a state secret. Mad Men never says what year or month it is in the first episode, but since Don's wife is still pregnant, we know it's less than nine months later. So, by inference, we're still in that small '60s window known as the Age of Camelot — after James Bond, before the JFK assassination.

And predictably, the new British owners have their own agendas. One is to call a meeting to fire Bert, the head of accounts. Another is to dispatch Don to Baltimore, to charm an old client who has a British connection of his own.

A lot of this episode has to do with the seismic shift of a corporate takeover. Of course, this mirrors, perfectly, how unsettled we're all feeling in the new millennium — and by now, we know all the employees at Sterling Cooper well enough to be fascinated by how they react. Roger, Pete, Peggy — they all angle for ways to protect or expand their turf. And even Joan, the va-va-voom secretary played by Christina Hendricks, holds her own in this pre-Beatles British invasion. While Bert, who has just been fired, throws a temper tantrum behind closed doors, Joan stands outside and gets into a verbal duel with the British boss' new secretary — a man, whom the other secretaries, citing a James Bond character, disparagingly refer to as "Moneypenny."

I love how politely defiant Joan is in that scene — and, let's admit it, how attractive. Lots of people, starting with Jon Hamm's Draper, are ridiculously handsome or beautiful in this 1960s drama, but Hendricks and her well-rounded curves may make Joan the most retrosexual Mad Men character of all, as well as one of the most complex.

The characters, even more than the setting, are what make this show so captivating. No matter which character is onscreen, you could follow that character for the rest of the hour without complaint. Not many drama series are written that well, and cast that deeply, to make you emotionally invested in almost everyone. The Wire, Homicide: Life on the Street, The Sopranos, The Shield, Damages — it's not a very long list, but it is an impressive one.

And Mad Men belongs right up there with them. It's one of the finest TV dramas ever made — and the new season begins just as strongly as last season ended.