Accessibility links
Revenue-Hungry States Take New Look At Gaming Although casino revenues nationwide fell last year, states facing big budget shortfalls are taking a new look at gambling — and former foes are reluctantly lining up in support. Governors of some states want their share of the revenue their neighbors get from residents who cross state lines to gamble. 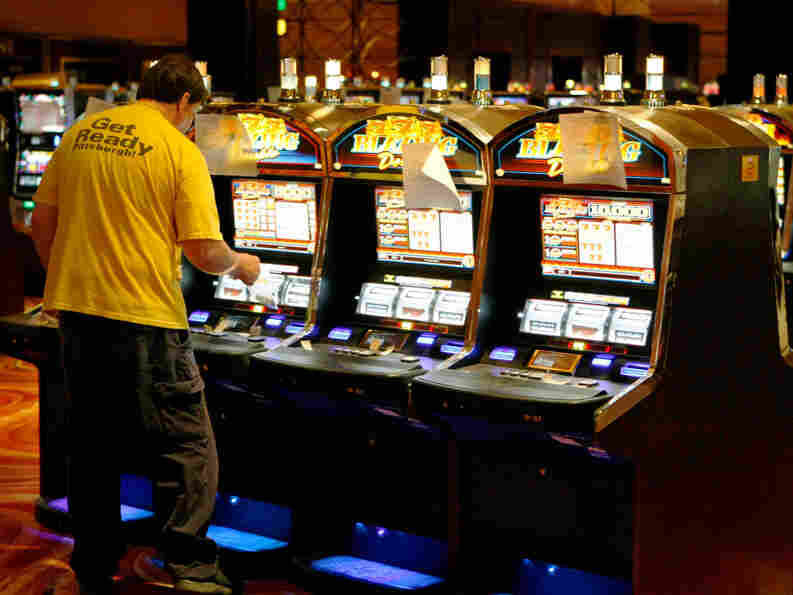 A technician looks over a slot machine at the new Rivers Casino in Pittsburgh in late July. The casino opened in early August, part of an increasing expansion of casino gambling in states. Keith Srakocic/AP hide caption 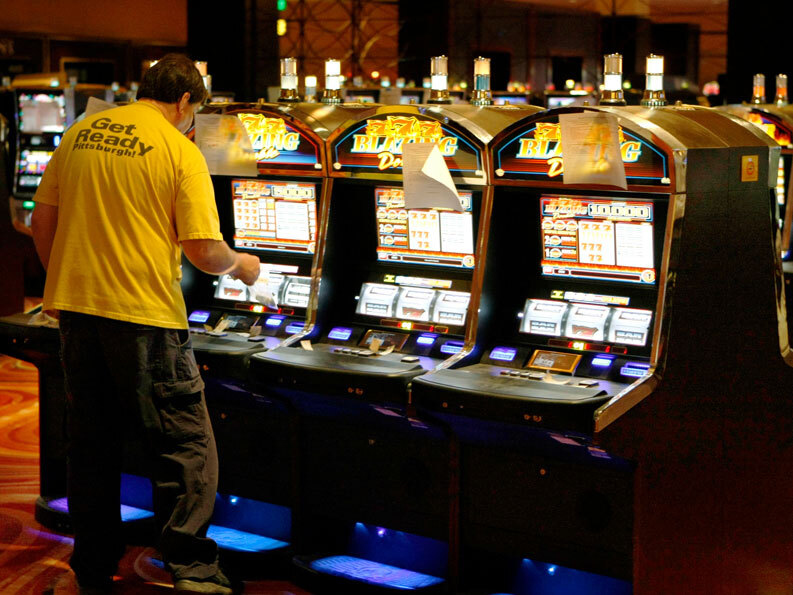 A technician looks over a slot machine at the new Rivers Casino in Pittsburgh in late July. The casino opened in early August, part of an increasing expansion of casino gambling in states.

With nearly every U.S. state forced to contemplate some combination of spending cuts and unpopular tax increases to cover huge budget shortfalls, politicians who had opposed casino gambling — a revenue source that faced long odds only a few years ago — are rethinking their stance.

In Ohio, Gov. Ted Strickland, a Democrat facing re-election next year, had long rejected the idea of expanded gambling — a view shared with a majority of Ohio's voters. They have said "no" to casino gambling in four referendums since 1990, the latest just last year.

But with a projected $3.2 billion deficit, Strickland fell in line with his fellow Democratic lawmakers and agreed to allow as many as 2,500 slot machines at each of Ohio's seven race tracks. The state believes will bring in $933 million in new licensing fees and taxes.

The bottom line, said Chris Redfern, the chairman of the state Democratic Party, is that Ohio needs the cash.

"All of the options were difficult," he said. "Laying off prison workers or teachers were also possibilities. We didn't want to do that."

Ohio is far from alone when it comes to budget problems. According to the Center on Budget and Policy Priorities, a Washington-based think tank, every state but Montana and North Dakota is up against shortfalls in the 2009 and 2010 fiscal years.

Politicians are turning to gambling to help close that gap, sometimes with the backing of voters. For example, in the 2008 election cycle, Colorado voters backed the expansion of table gaming and betting limits at casinos; Missouri voters approved the end of "loss limits" during casino sessions.

Meanwhile, Delaware's legislature has legalized sports betting in casinos, although that is being fought in the courts by the major professional sports leagues. Pennsylvania and Illinois are moving to place video poker machines in bars.

Whether that expansion will get the desired results is an open question. According to the American Gaming Association, nationwide gross gaming revenues came in at $32.54 billion in 2008 — but that was 4.7 percent below 2007's record revenues. In its annual report on casino entertainment, the AGA quotes a national survey in which 60 percent of respondents said they have cut back on casino gaming.

In Ohio, Redfern steadfastly defends the decision to add slots to close the funding gap. He argues that the machines will be deployed only at existing horse tracks, where gambling already is legal. Several neighboring states and nearby Canada offer gambling, and Redfern said adding slots will give the Buckeye State a share of the hundreds of millions of dollars those casinos make. Indiana's casinos, for example, raked in $2.67 billion last year, and Pennsylvania's took in $1.6 billion.

"Look, we are one of the few large states in the country that fixed our budget problems without raising taxes," Redfern said.

But already another referendum is on the ballot in Ohio for November that would put the question of casino gambling back before the voters.

"They get the camel's nose under the tent, and the next thing you know, the whole camel is in," said John Kindt, a professor of business and legal policy at the University of Illinois who studies the impact of state-sponsored gambling.

That's what happened, he said, in Illinois. In 1990, it approved riverboat gambling, a compromise that keeps the controversial practice of casino gambling "offshore."

In less than a decade, however, so-called dockside gambling — in which the riverboats never leave the pier and open their doors to 24/7 gaming — was approved. Earlier this month, the state approved a bill to allow tens of thousands of video poker machines to be placed in bars and restaurants. The state has had a lottery since the mid-1970s.

Forty-two states and the District of Columbia have a lottery, and many also have casinos run by companies or Native American communities. But more than anything else, the push to introduce video slot machines at bars and restaurants has raised the ire of gambling opponents.

Kindt called them the "crack cocaine" of the business — highly addictive and highly lucrative. He said their average annual take is about $100,000 per machine.

According to the gaming association, slot machines are by far the most popular casino game, outpacing blackjack, the next most popular, by a nearly 3-to-1 margin.

In addition, slots "are very attractive to the current generation that is very accustomed to the high-speed gaming experience," said Keith Whyte of the National Council on Problem Gambling.

"We know from studies over 30 years that the earlier one starts to gamble, the more likely they are to be gamblers later in life," Whyte said.

The council is officially neutral on the issue of legalized gambling, but it does lobby for spending a portion of revenues on treatment for the estimated 4 percent of people who qualify as pathological or problem gamblers. These people account for a disproportionate percentage of the take and a large chunk of the social costs, such as personal bankruptcies and increased crime, that Whyte said amount to about $7 billion a year nationwide.

The AGA's president and CEO, Frank Fahrenkopf Jr., argues that "the economic benefits of gaming coming to a community far outpace any social detriment."

"Historically, in down economic times — that's when legislators, governors and voters look more closely at new gambling options," he said.

The feared social cost to gambling is exaggerated, he said, and states that were early adopters of commercial gaming have expanded, not retreated from, those enterprises.

"We know the moral arguments aren't going away," he said, attributing most of the criticism to a small but vocal minority of evangelical Christians. "God love them, they are entitled to their opinion, and I respect that. I just don't agree."