Accessibility links
Foreclosures Loom Large For Middle Class New data out this week show that foreclosures keep rising despite government efforts to prevent them. Foreclosure filings in July were up 32 percent from a year ago. As the crisis expands, it's dragging down more middle-class Americans, like a family in Springfield, Mass. 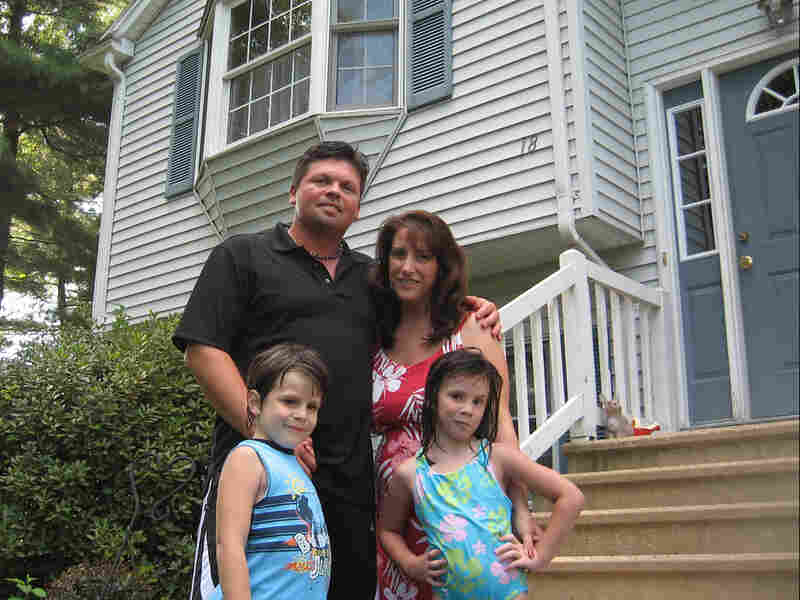 The Crochetiere family in front of their home in Springfield, Mass. Ron and Sandi are pictured with their children, Christina, 6, and Mason, 5. They are struggling to hold on to their home even though they owe $50,000 more than it is worth. Chris Arnold/NPR hide caption 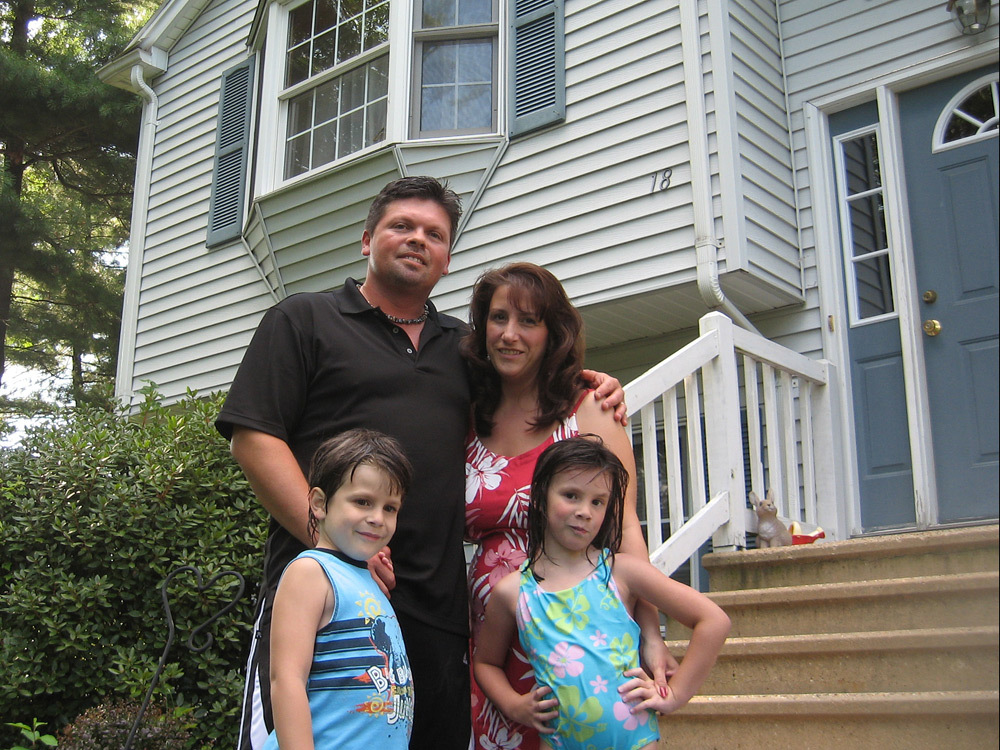 The Crochetiere family in front of their home in Springfield, Mass. Ron and Sandi are pictured with their children, Christina, 6, and Mason, 5. They are struggling to hold on to their home even though they owe $50,000 more than it is worth.

Foreclosures keep rising despite government efforts to prevent them. RealtyTrac reports that filings in July were up 32 percent from a year ago.

And as the crisis expands, it's dragging down more middle-class Americans who are making less money because of the battered economy. Many are responsible homeowners who've been paying their mortgages for years.

At his corner diner and sandwich shop in Springfield, Mass., Ronald Crochetiere is leaning over the grill and scraping it down to clean it at the end of the day. "I'm one of these little guys on the corner. I've been here for 17 years," he says.

But with the recession, business has been much slower.

All fall and winter business was "going down, down, down when it should have been busy, busy, busy," Crochetiere says. It's not that he can't turn a profit, he says, "but the problem is kind of a small profit compared to what I made in the past." 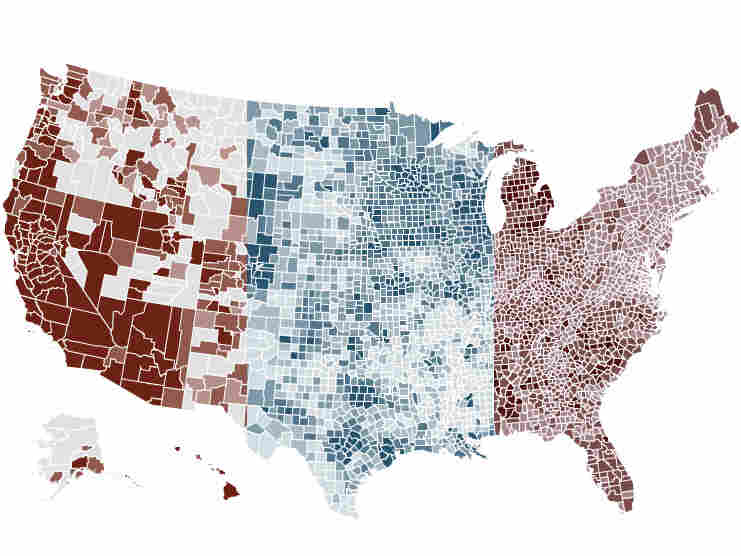 Crochetiere says he's taking home about $1,000 a month less. On top of that his wife, a nurse, hurt her back and has had to cut back her hours. And for the first time in 21 years of marriage the couple is having trouble paying their bills and suddenly can't afford their mortgage. A lot of other long-time responsible homeowners are in the same boat.

Michelle Jones, a vice president at Consumer Credit Counseling Service, a big agency that works with homeowners around the country, says she has noticed a change. "We are talking with more clients who have never had serious financial difficulty before in their life," she says. More people who've always had jobs and always paid their bills are winding up in trouble, Jones says. 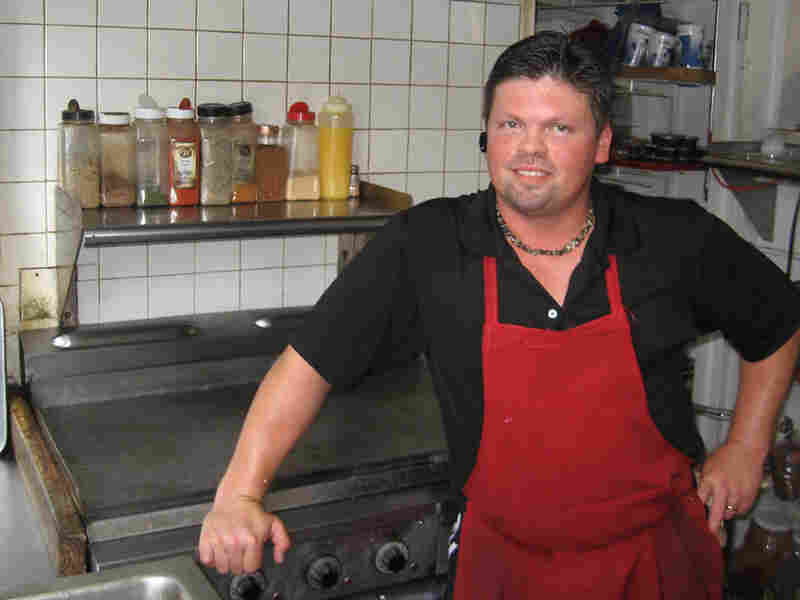 Ron Crochetiere at his restaurant, City Jake's Cafe, in Springfield. He has seen his income drop by about $1,000 a month during the recession. Chris Arnold/NPR hide caption 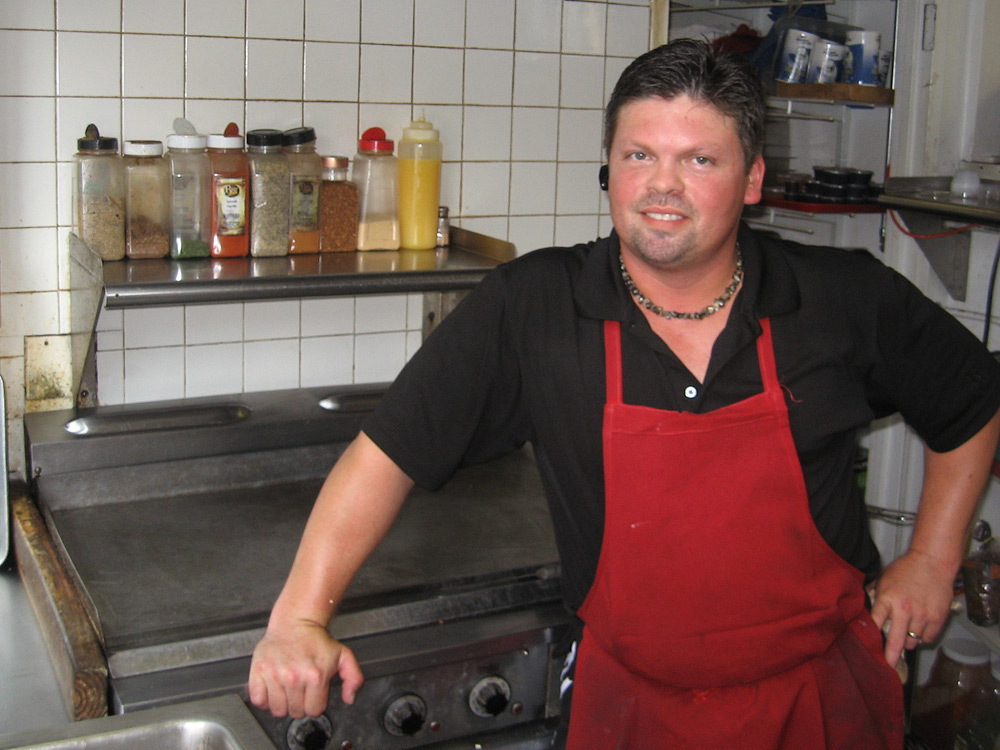 Ron Crochetiere at his restaurant, City Jake's Cafe, in Springfield. He has seen his income drop by about $1,000 a month during the recession.

In the past, people faced foreclosure for many reasons, such as divorce or costly medical expenses, she says. Of course, many had gotten into high-interest subprime loans that they could never afford in the first place. And, Jones says, overspending and a lack of education about budgeting were just as often the culprit. But now the biggest problem is loss of income, she adds.

In June, 72 percent of the people calling the agency for help because they faced foreclosure cited a reduction in income or a loss of employment. "That's huge, and it's a big change for us," Jones says.

Pride In A Home

Back in Springfield, as the Crochetieres' two young children showed off their jumping skills in a backyard kiddie pool, Sandi Crochetiere, Ron's wife, said she loves the house. It's not a mansion. It's a raised-ranch-style home worth about $200,000.

Since they're upside down — owing more than it's worth — some people say they should just walk away from the house. But the Crochetieres have been here 12 years, and the couple say they want to pay what they owe.

And they don't want to leave. Sandi says she grew up on welfare and was the youngest of 10 children. She wants to give her kids more than she had.

Looking across the big backyard toward the kids, Sandi says the couple has worked hard for everything they have: "We built this house; this is what we've always planned on."

The family's biggest problem is a large home-equity loan. They used to be able to afford it. But the interest rate is at 11 percent. Ron's been trying to get it lowered.

A lot of economists say that from a lender's perspective, doing that to avoid a costly foreclosure is a good business decision. The Obama administration is pushing a program to encourage lenders to do more of this. The Treasury Department says the plan has so far resulted in 400,000 loan modifications offered to borrowers.

Mark Zandi, the chief economist for Moody's Economy.com, says Ron Crochetiere seems to be a good candidate. "For that person the president's loan mod plan is perfect because he wants to stay in that home."

Zandi says preventing foreclosures is crucial. And he worries the president's plan doesn't go far enough. Zandi would like people to get more incentive to stay in their homes by getting the size of their loan reduced. The president's plan lowers borrowers' payments, but it often still leaves them owing a lot more than their house is worth. "There are a lot more folks who don't think that makes any sense and they're just not going to do it," Zandi says.

He is in the camp of economists who think that a lot more foreclosures could be prevented if the industry would offer more aggressive loan modifications. The idea is not to offer these as some kind of charity, but because it's good for the economy and the lenders, too.

The Crochetieres are a case in point. They're already $50,000 upside down in the mortgage. Foreclosure sales often happen at fire-sale prices. So if the lender takes their house, they'll lose about $70,000 just in the sale. Then there are attorney's fees, months of lost income, and other expenses.

The lender might easily lose $100,000 in a foreclosure. Zandi says that gives lenders a lot of wiggle room to cut people deals that make good sense for everybody. Some other economists are skeptical and think that most people facing foreclosure are just not good "credit risks." Those economists expect most of the people who get loan modifications to end up defaulting again.

The Crochetieres' lender, a company called Green Tree Servicing LLC, says it is considering a loan modification for the couple. But a recent report from the Treasury Department shows that as of the end of July, Green Tree has modified only 4 percent of its problem loans through the president's plan.