Accessibility links
A Whole Lot Of Flutes Going On When Lara Pellegrinelli was a kid, she wanted to play the flute just like James Galway. On Friday, she got to play with Sir James (and 1,999 other flutists) as they broke the Guinness Book's world record for "World's Largest Flute Ensemble." 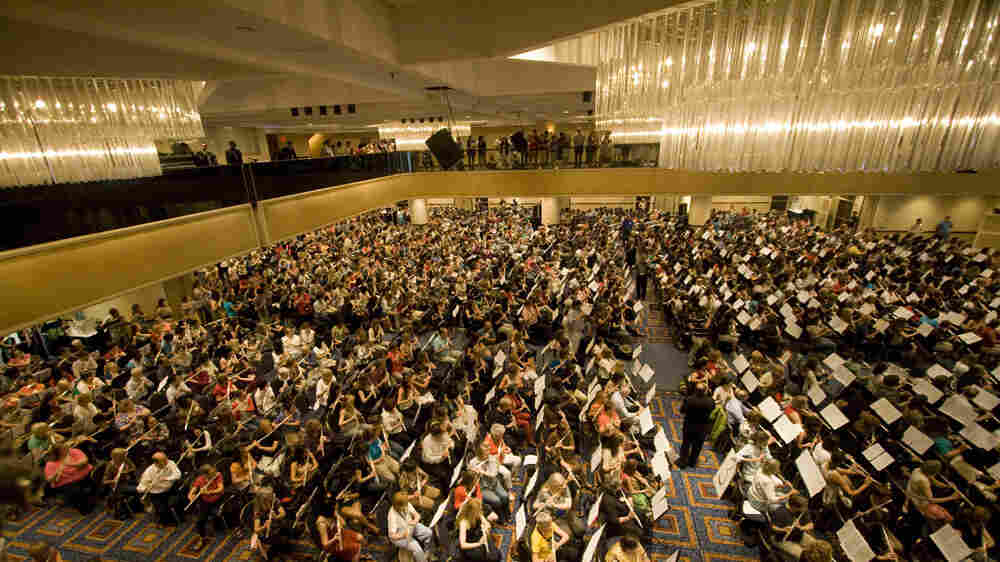 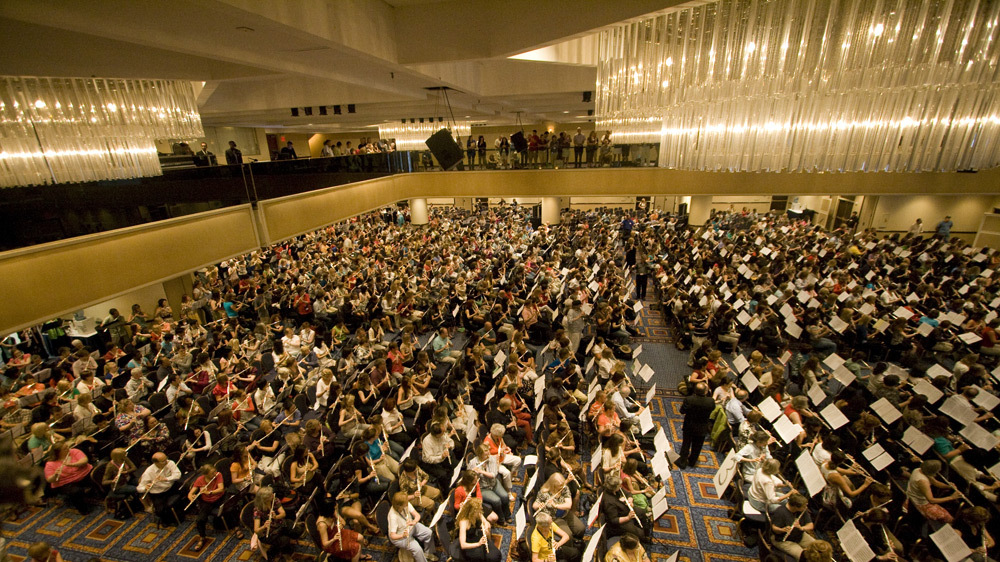 Friday morning at the National Flute Association Convention in New York City, world-renowned flutist James Galway led a successful challenge to the Guinness Book's world record for the "Largest Flute Ensemble." Preparations were under way in New York when a group of 1,975 Chinese students broke the existing record late last month. Reporter Lara Pellegrinelli was one of the flutists who triumphed on Friday.

When I was a kid, I wanted to play the flute just like James Galway. His album The Man with the Golden Flute came into my life as I struggled with my nickel-plated Bundy. Grown-up fans seemed wowed by Galway's "Flight of the Bumblebee," but it was a waltz that held me spellbound.

It was such a pure expression of joy that I could feel it down to the tips of my braids. If only I could have a golden flute — a treasure resembling my grandparents' electroplated flatware, used only for the most special occasions.

I never got a golden flute, but when I was invited to perform with James Galway, in honor of his 70th birthday at the National Flute Association Convention, it was a dream come true.

Okay, so I wasn't the only one who'd been invited to play with Sir James. There were nearly 2,000 other flutists there to help break the Guinness world record. I rounded up four to help me rehearse the medley of Galway favorites on the program: Denis Bouriakov, the new principal flutist of the Metropolitan Opera Orchestra, jazz flutist Anne Drummond and 9-year-old Emma Resmini.

Honestly, I hadn't played in a decade — years in which I'd become asthmatic and the muscles in my face had apparently atrophied — but I figured if Leslie Stahl had the guts to play the piano on 60 Minutes, I'd survive. I practiced the lowly fourth flute part every day.

Making 2,000 flutes look good was the job of the conductor.

"Can you play it a bit nicer?" Galway asked. "It doesn't sound nice. I want to make it sound like we're in control of the situation."

I didn't know if I could play it any nicer. I threw myself at the feet of the master and asked if he had any words of wisdom.

"There is no advice," Galway continued. "There's nothing I can tell you that's going to make it any better. You just do what you can do. That's it. You can't in one day suddenly become better."

"I played for the last 61 years. Religiously," Galway laughed. "No, it's not going to make any difference. You just enjoy yourself. That's my advice."

Those words lifted a burden from my shoulders, and I let the mighty winds of the fourth flute section buoy me. This morning my playing attained new heights, even if I couldn't quite produce the most glorious, golden tones. Luckily, for me — and for everyone else — I'd inherited my grandparents electroplate.