Accessibility links
Developers Threaten To Boot Artist Squatters In Berlin Increasing gentrification in Berlin is putting the city's famous and raucous alternative art scene at risk. Artists who have squatted in a ramshackle building for nearly 20 years now face eviction by corporate owners who want to turn the site into high-end apartments. 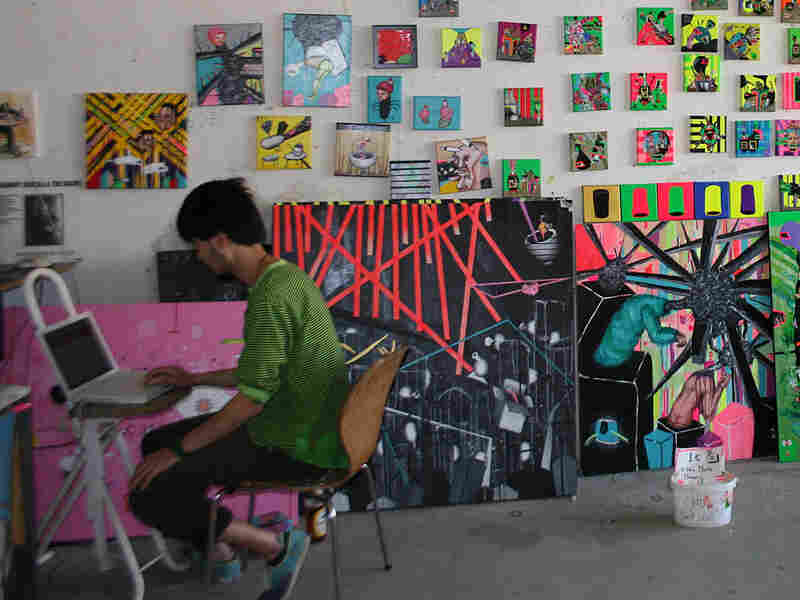 Kuri Haran works in his studio at Tacheles art collective in Berlin. Artists in the community are facing eviction by corporate owners who want to turn the ramshackle building into high-end apartments. Eric Westervelt/NPR hide caption 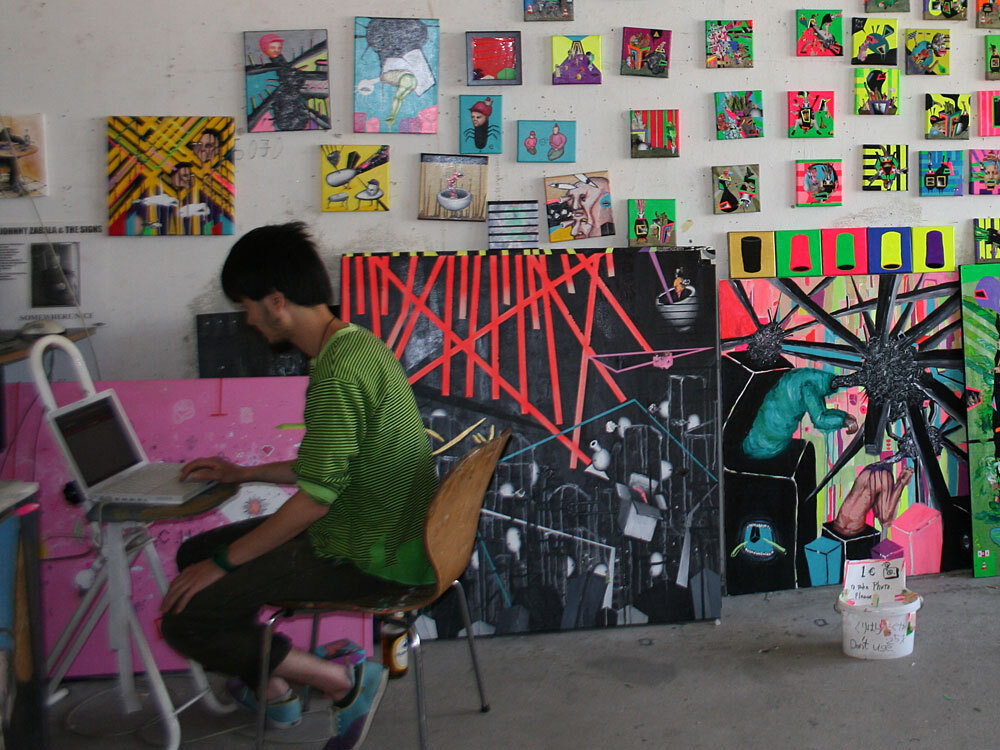 Kuri Haran works in his studio at Tacheles art collective in Berlin. Artists in the community are facing eviction by corporate owners who want to turn the ramshackle building into high-end apartments.

Twenty years after the fall of the Berlin Wall, the city's famous and raucous alternative art scene is at risk of becoming just another tourist attraction in an increasingly gentrified urban area.

A fight over a ramshackle building in the east, near the former site of the wall, is emblematic of that tension: Artists who squatted the building nearly two decades ago face the possibility of eviction by corporate owners who want to turn the site into high-end apartments.

The battle is in court. But the global economic crisis might end up offering a reprieve.

There is a pop-art-meets-the-apocalypse feel to the Tacheles art collective in central Berlin. The back section of what was once a giant department store built in the early 1900s was blown out by Allied air raids in World War II.

Today, every inch of the walls and halls of the bomb-damaged building is covered floor to ceiling with a colorful kaleidoscope of graffiti art and abstract paintings. The halls smell of urine and cigarettes.

Artists work in low-rent studios on several floors, painting, sculpting and designing away while peddling some of their work to a steady stream of tourists and some locals.

At night, drug dealers peddle a variety of illegal goods out front. Live bands jam out back.

'We Are Quite Underground'

"This is kind of a special place," says painter Kuri Haran in his Tacheles studio. "We are quite underground."

Haran came here from Tokyo two years ago and stayed. He says the late-night junkies, crackheads and drunken tourists wandering about the massive building sometimes annoy and scare him. 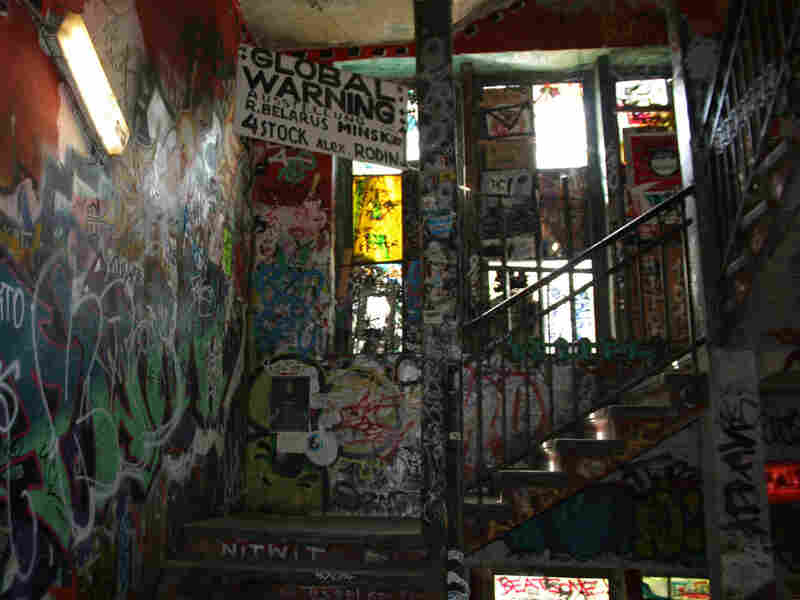 A colorful kaleidoscope of graffiti and abstract paintings covers the walls and ceilings of what remains of the building. Eric Westervelt/NPR hide caption 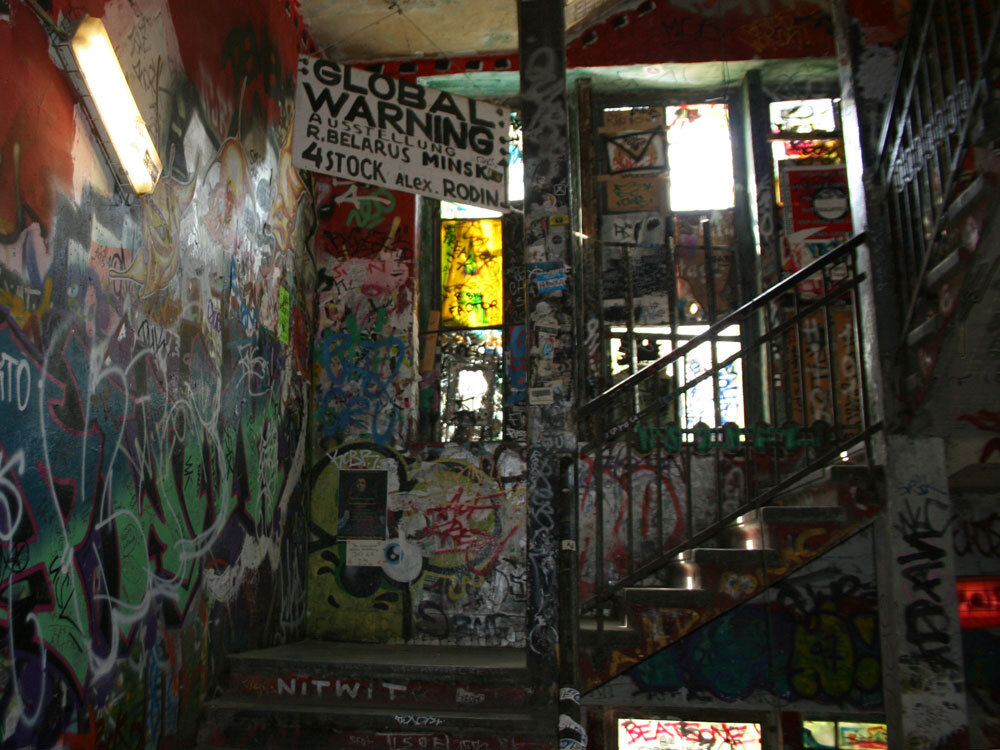 A colorful kaleidoscope of graffiti and abstract paintings covers the walls and ceilings of what remains of the building.

But Haran says there is no other place like Tacheles, where artists can work, sell, and meet. "It's cheap rent and if you get annoyed with people, you can just shut the door and paint," he says.

There is an improvised art exhibition and flea market, too, selling paintings, sculptures and jewelry. There are multiple bars, a techno dance club and two stages throughout the complex.

"People coming to Berlin come to Tacheles because this is unique," says Martin Reiter, an installation artist and director of the nonprofit cooperative that manages the building. Tall and thin with shocks of gray in his long, unruly brown hair, Reiter says tourists and others see Tacheles as an unusual oasis amid the blandness of commercial mass culture.

"We are now in times that the people got the feeling nothing is real anymore because of, let's say, these TV shows, electronic gadgets and consumer society," he says, "At Tacheles they have the feeling, 'Oh, this is the real thing.' "

Not Just Another Commercial Space

Whether Tacheles has stayed true to its rebellious, counterculture roots or become a tourist shadow of its once-cutting-edge self is open to debate.

Linda Cerna, a spokeswoman for the collective, insists Tacheles is still a first step for many artists. It remains, she says, an alternative to a Berlin art scene increasingly dominated by high-end commercial galleries and their top-dollar commissions.

"We have more than 300,000 visitors a years, so you have the chance to show your work and maybe make first contacts" with art dealers, Cerna says. But the goal of the collective at Tacheles is "not to become just another commercial place." 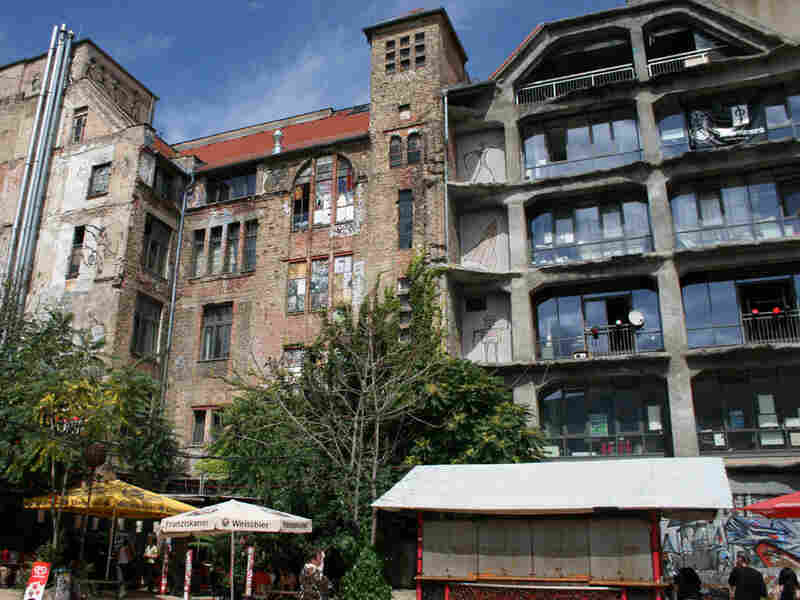 The building that house the Tacheles art collective was once a giant department store, built in the early 1900s; Allied air raids during World War II blew out the back walls. Eric Westervelt/NPR hide caption 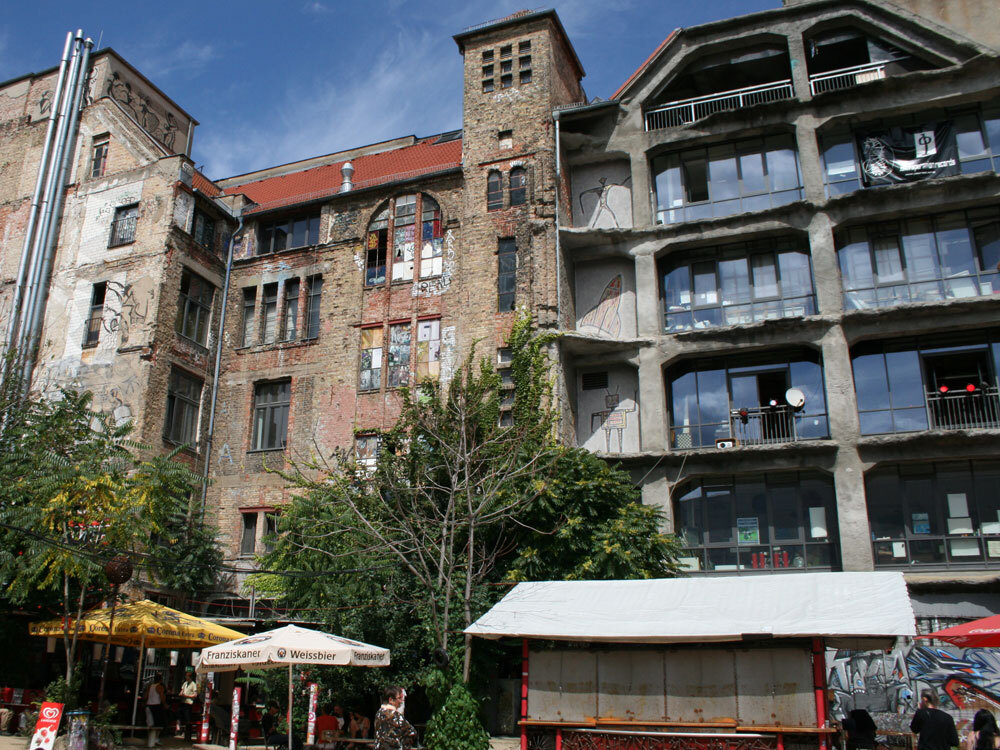 The building that house the Tacheles art collective was once a giant department store, built in the early 1900s; Allied air raids during World War II blew out the back walls.

For nearly 30 years under communism, the Tacheles building area was a dangerous, no man's land. The building sat just a few hundred yards from the heavily guarded Berlin Wall.

After the wall and the East German communist regime fell in November 1989, the artists moved in. In 1998, the German government sold the place to owners who, for a decade, made no significant effort to manage the building. The artists paid a symbolic annual rent of half a euro, or about 70 cents.

But late last year the owners, real estate and investment firm The Fundus Group, told the artists to leave. The artists refused and countersued. A court hearing is scheduled for the end of August.

"One thing is clear: after developing the project for 19 years — a very successful 19 years — the artists and organizers will not simply leave the building," Cerna says. "And it would bring a negative image to whoever would try to force us out of here."

Recession To The Rescue?

Cerna says the collective is looking for a political solution and has appealed to Berlin's mayor.

But help may have come from the global recession: The owners' main creditor, state-run HSH Nordbank, has moved to foreclose on the building and is trying to force an auction.

The German bank has faced serious economic troubles this year. It had to get more than $13 billion in German government bailout money. Tacheles organizers hope the economic downturn will help keep the encroaching gentrification at bay.

"Now the whole area is starting to go down again," Reiter, the manager, notes gleefully. "This means the rents are going down again. Artists come back. Free-minded people come back to the area because they are able to pay their rent. So the crisis, the so-called crisis, is super for us, you know what I mean!"

Spokesmen for HSH Nordbank and The Fundus Group both declined to comment, citing the court case.

The artists are hoping to convince the court later this month that they have the right to stay, after nearly two decades of occupying the building and spending thousands of dollars propping up the decaying infrastructure.

"But I've been working on my presentation to the judge for weeks," he says. "I can't wait to get before the judge and then we will talk Tacheles."