Accessibility links
Cherries on Top The cherry season is all too short, so make the most of it while you still can. While it's tempting to use cherries for desserts such as a trifle or clafoutis, they are equally suited to breakfast, appetizers and as accents in dinner dishes. 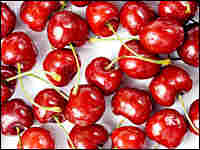 The array of cherries at your local farmer's market may be dizzying, but the best way to buy is to taste first. iStock hide caption 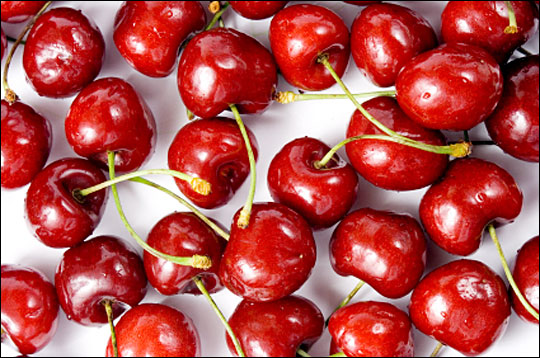 The array of cherries at your local farmer's market may be dizzying, but the best way to buy is to taste first. 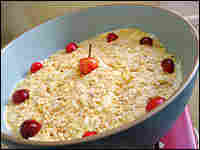 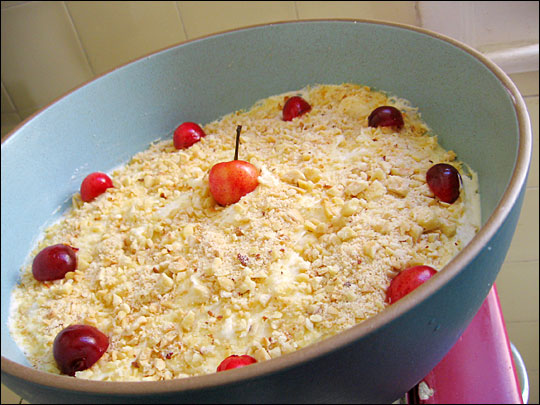 Brandied cherry trifle looks nice and neat until you dig in for a gratifyingly sloppy slice.

Choosing at the Market

Cherries do not ripen once picked; the closer to home you can buy them, the better. They also lose flavor relatively quickly, so try to use them as soon after purchase as possible. Look for firm, unblemished fruit with a deep color, and preferably stems intact. If you need to store them, chef Eric Gower recommends putting a damp paper towel in the plastic bag to preserve moisture, then stowing them in your refrigerator's crisper.

You could buy a nifty cherry-pitting gadget, but alternatives exist. Any narrow implement — a sturdy straw, a pastry bag tip, a chopstick, a nail, or in my case, a slender spoon handle — can be used. Remove the cherry's stem first, then position your tool at the fruit's base. Holding the cherry in your fist, push through the bottom and pop the pit out through the stem end. If you can, pit them over a bowl and strain the juice to keep with the cherries. To be honest, for some recipes I ended up just running a knife around the cherry, breaking it in half and digging out the pit with my finger: not very elegant or recommended when you're cooking for company, but effective enough for making cherry pancakes.

Christina Nunez is a writer in San Francisco, where she works for NPR.org from the offices of member station KQED. In her spare time, she assists with cooking demonstrations at the Ferry Building Farmer's Market, where chef Eric Gower recently shared his recipes and was very tolerant of her less-than-

It seems that each year, I'm so wrapped up in the too-brief strawberry season that I fail to pay my respects to the too-brief cherry season. Both fruits reach and surpass their peak disconcertingly quickly, between late spring and mid-summer. This year, my increased attendance at the farmer's market led me to be more inclusive.

My mom has rhapsodized about cherries for years. She always viewed them as a decadent treat, whether eaten from a bowl or folded into the chocolate-cherry bread that she loved to buy at the bakery. Her affection was entwined with nostalgia for the cake her adored grandmother would make for her childhood birthdays: cherry angel food, with white fluffy frosting.

But her praise fell on deaf ears in our house. I ignored the occasional bowl of cherries that my mom would allow herself, content to let my own perception of cherry flavor be informed by childhood experience: Lifesavers, Jell-O and, of course, maraschinos.

Eyeing the cheerful bins of cherries at the market, I decided it was time to bring them into the kitchen and really learn about their flavors. My first purchase of the cherry season — a bag of Bings — went straight into a clafoutis (well, maybe after several went straight into my mouth). Cherries are made for that wonderfully simple French dessert, a batter poured over fruit and baked to custardy perfection. That initial experiment, which soon vanished as it was eaten for both breakfast and dessert, made me want to make up for all those lost cherry seasons.

The next time, I brought home Brooks and Rainier cherries, decided to get them drunk and take them to a party with some ladyfingers and mascarpone cheese. The resulting trifle was a wonderfully messy treat, not even mildly reminiscent of Luden's cherry lozenges.

The only relationship I now see between real, fresh cherries and cherry cough drops is a health claim. I don't know if the lozenges work, but the fruit is packed with healthful compounds that even have been shown to ease arthritis.

The word cherry has roots in the Greek word kerasos, and is also associated with the Turkish city of Cerasus (now Giresun), where the first exports of cherries to Europe originated. Turkey and the United States are now the world's top exporters of cherries.

The types of cherries you'll find at U.S. markets vary depending on where you live. For tart cherries (Morello, Amarelle), which are excellent in pies and usually sold canned or otherwise preserved, Michigan rules. The majority of our sweet cherries (Bing, Rainier) come from Washington, California and Oregon.

Farmers in the San Francisco Bay Area where I live grow a confusingly wide variety of sweet cherries: Brooks, Lambert, Tulare and more. Because the flavor and quality of different types varies depending on the time of year, quality of season and grower, it helps if you can taste before you buy.

Though the obvious temptation is to take advantage of cherries' sweetness for desserts, they make an excellent accent in savory dishes. In her Zuni Café Cookbook, chef Judy Rodgers roasts Bing cherries in olive oil and uses them in a salad. You might even forgo the salad: eating cherries after they have been roasted for five minutes or so in a 400-degree oven might be the best way to enjoy them. Roasting makes them taste like mini cherry pies, the interior of the fruit transformed to a pudding-like consistency that breaks through the "crust" of the skin when you bite it.

I asked Eric Gower, a private chef and author The Breakaway Cook, for more ideas. He suggested combining them with meats such as pork or chicken, and then said something about a recipe he was working on involving edamame and smoked salmon. Edamame and smoked salmon... with cherries? It seemed for a moment that I had hit my personal ceiling of cherry adventuring until I actually tried Gower's recipe, which may be the best thing for smoked salmon since cream cheese.

No sooner have I acquainted myself with the great cherry than the season is nearly over. Seize them while you can. 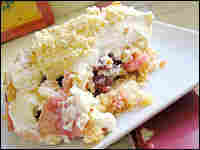 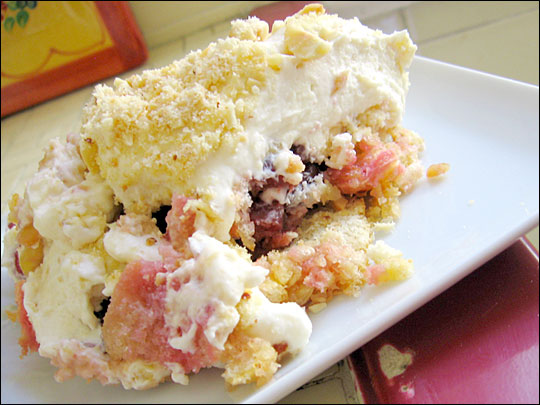 Bing cherries work quite well for this recipe, but if you can, try a split of Bing and Rainiers (or similar variety). The latter are more tart, tempering this very sweet dessert. The trifle needs several hours of refrigeration before serving. This recipe is inspired by one in Forever Summer by Nigella Lawson (Hyperion 2003).

4 cups of halved, pitted cherries, plus 8-10 whole cherries for garnish

Spread the hazelnuts on a baking sheet and toast them in the oven for 10 minutes, until the nuts begin to brown and the skins split open. Wrap the nuts in a kitchen towel and rub together to remove skins.

Place the cherry halves, brandy, 1 cup of the sugar and ½ cup of water into a large pot and bring to a boil. When the mixture begins to foam, reduce to medium-low heat and simmer for about 10 more minutes.

Take 8 ladyfingers and slice them in half lengthwise and crosswise, then use them to line the bottom of a large bowl. Don't worry if the pieces are broken or uneven – the point is to create a sturdy base for the trifle.

In a food processor, blend the remaining ladyfingers with the hazelnuts to a coarse breadcrumb consistency. Dust the ladyfingers in the bowl with a third of this mixture.

Using a slotted spoon, transfer cherries to the bowl, covering the ladyfingers. Spoon over 2-4 tablespoons of the liquid as well, reserving the remainder.

Lightly dust the cherries with more of the crumb mixture, being sure to leave enough for topping at the end. Drizzle on a few more tablespoonfuls of liquid.

In a mixer, whisk together the egg yolks and remaining 1/3 cup sugar until they become paste-like. Add the mascarpone cheese, then slowly drizzle in 1/3 cup of the cherry liquid. Set aside.

Using a different bowl, beat the egg whites until stiff and fold into the mascarpone mixture. Spread the cheese mixture over the top of the trifle, cover with plastic and refrigerate for at least four hours or overnight.

When ready to serve, dust the trifle with the last of your crumb mixture and top it with halved or whole cherries. 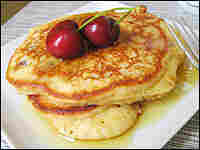 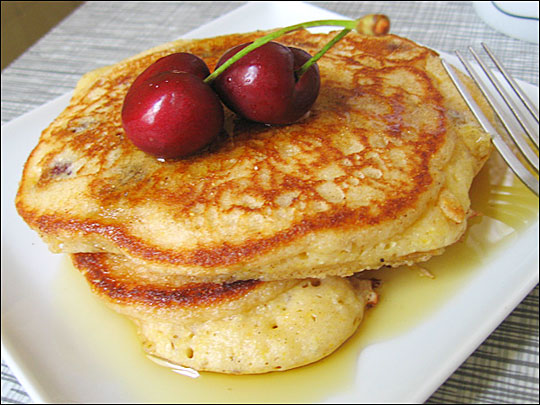 You can keep leftover batter from this recipe in the refrigerator for a few days, but using it right away guarantees the best texture for these slightly crispy, hearty pancakes.

Butter or oil for frying

Combine the dry ingredients thoroughly in a medium bowl. Add egg yolk and buttermilk, then stir until combined, using a touch more buttermilk for thinner pancakes. Stir cherries into batter.

Heat a pat of butter or 1 tablespoon of vegetable oil over medium-low heat in a medium frying pan until a drop of water sizzles in the pan. Drop a large spoonful of the batter into the center of the pan and cook pancake until bubbles form on the top and the bottom is firm and lightly browned, about 3 minutes. Flip pancake, pressing lightly on the top, and cook another 2 or 3 minutes or until other side is also browned and firm.

Transfer to a plate (or to a baking sheet in a 200-degree oven, to keep warm) and repeat process with the rest of the batter, adding butter or oil to the pan as needed. Serve immediately with maple syrup. 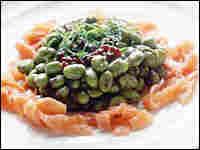 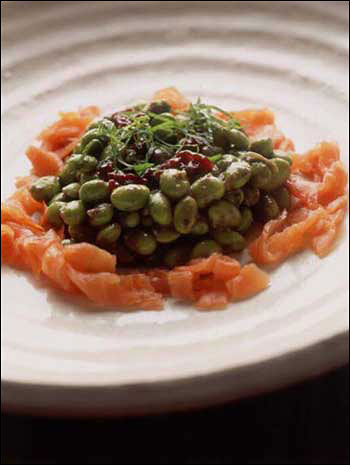 This filling yet light dish is a visual feast. It's a lovely first course for just about any dinner menu. Fresh edamame in the pod can be hard to find (and are a bit of a hassle to work with), so I use frozen, already shelled edamame, which are boiled for about 5 minutes, straight from the freezer. Shiso, a mint-like plant also known as perilla, may be challenging to find; mint is a good substitution, but check at Asian markets. Great with a glass of champagne. — Eric Gower, author of The Breakaway Cook (Morrow Cookbooks 2007)

1 tablespoon chopped shiso leaves (about 5), plus a little more for garnish

8–10 large Bing (or other) cherries, pitted and chopped, plus a few extra for garnish

In a blender, combine the shiso, olive oil, cherries, vinegar, salt, pepper and 2 tablespoons of the edamame. When blended, add mixture to the rest of the edamame and mix. On a large plate, layer the salmon in a circle, and spoon edamame mixture over it, garnishing it with the extra cherries. Adjust the salt. 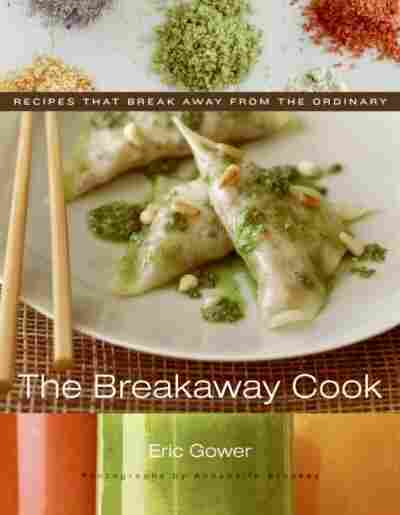 Recipes That Break Away from the Ordinary