Accessibility links
For Chinese Seniors, Love Blooms In Beijing Park Most of the time, Changpuhe Park is just another urban oasis. But on Tuesday and Saturday mornings, the beautiful park transforms into the center of the Chinese capital's dating scene for seniors. Amid ballroom dancing and Peking Opera, middle-aged and senior citizens seek romance. 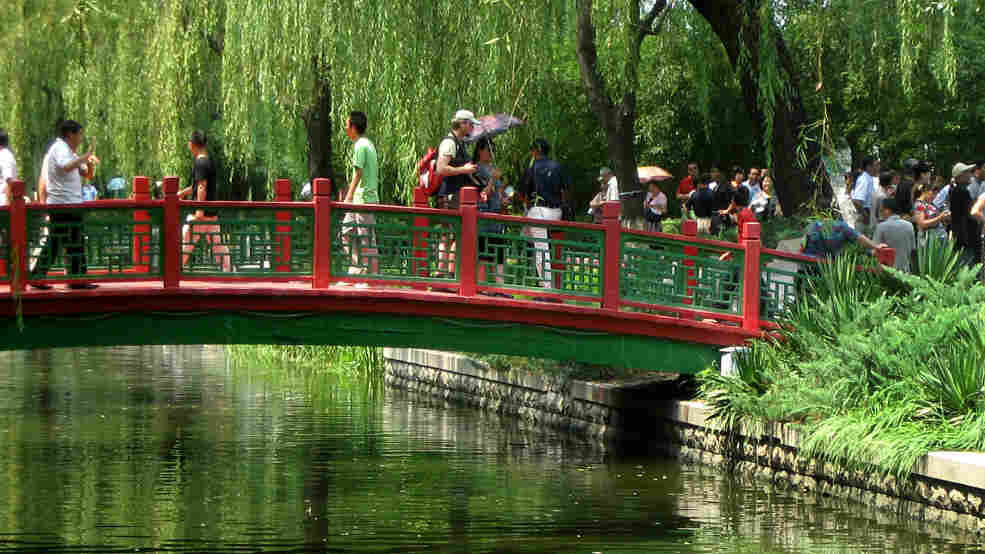 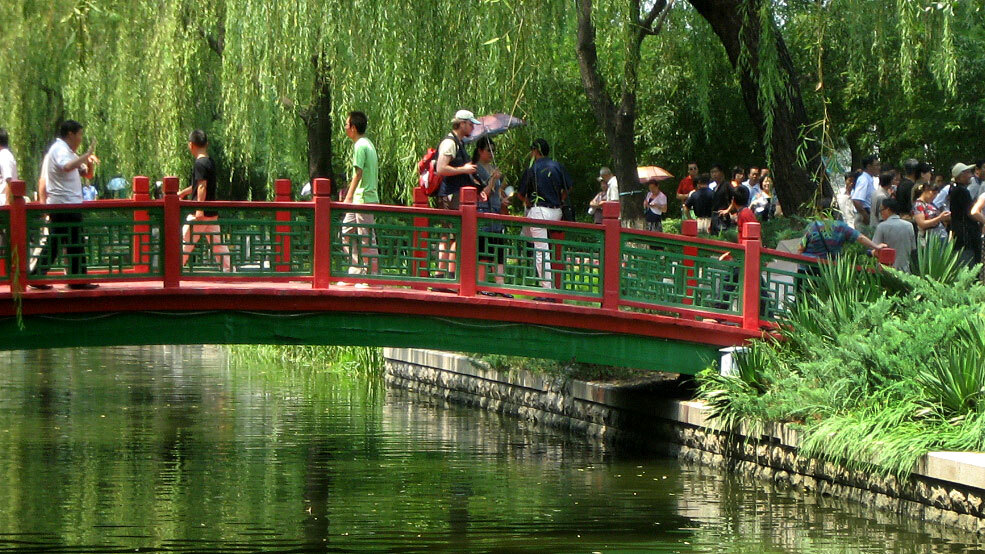 Visitors to Beijing's Changpuhe Park walk over Magpie Bridge, which locals say symbolizes good luck and romance. The park has become an informal gathering point for middle-aged and elderly residents in search of romance.

Most of the time, Changpuhe Park is just another urban oasis. But on certain days, the beautiful park transforms into the center of the Chinese capital's dating scene for seniors.

Changpuhe lies just to the east of the Forbidden City and Tiananmen Square, beneath the high crimson walls of the old imperial city. Tall willow trees drape elegantly over a man-made stream full of goldfish. Spanning the stream is Magpie Bridge, which locals say symbolizes good fortune and romance.

The scene gets swinging on Tuesday and Saturday mornings. Amid ballroom dancing and Peking Opera singing, seniors — and some middle-aged folks, too — sit under a long colonnade, fanning themselves, drinking tea and swapping stories. Some of the tales are bittersweet.

Li Yan, 42, is a regular on the scene. Her husband was out fishing one day when floodwaters swept him away. Since then, she has come to the park a few times each month, sometimes looking for a date for herself, sometimes just to meet friends.

Li says she has an eagle eye for spotting likely couples.

"Out of 107 couples I've introduced, 13 have gotten married. They're all doing extremely well," she says proudly. Then, looking a bit wistful, she adds: "I've done very well for others, but not so well for myself. Although I haven't had any luck, I've met many great sisters here."

Li says many women at the park come from the provinces, hoping to find a Beijing husband so that they can move to the capital.

Standing nearby is a retired merchant named Chen Zhenyu. He found a partner here, but he confides that it didn't last long. He says most seniors' views of marriage and dating are not as traditional as you might think.

"Seniors here are not concerned about finding mates of the same social status as themselves," he says. "We're no different from younger folks. We, too, believe in love at first sight. We believe in yuanfen."

Yuanfen is a phrase often heard at the park; it's a bit like the Buddhist idea of karma. Every meeting, every marriage, every break-up is predestined by one's yuanfen with that person.

Romantic as they may be, these folks are, after all, cruising a city park. So they have to be a bit cautious and protect themselves from suitors who are just after their money.

Lu Dong's wife went off to do business in Europe and never came back. The 63-year-old has met most of the female regulars here, but no instant karma for him yet. He says that many seniors want their children to inherit their homes, and are cautious about finding a new partner who could get a part of their property if they marry.

At this point, a slightly nervous-looking middle-aged woman, who only gives her family name, Wu, approaches Lu Dong, and they stand talking at one end of Magpie Bridge.

"This year, you're?" Lu asks hesitantly.

"What kind of man are you looking for?"

"Someone who likes to exercise. Healthy," she says.

"You're looking for a man with his own home?" Lu queries.

"Of course that's what I want," Wu says assertively.

Lu responds with the certainty of a seasoned park cruiser: "I ask, because women here are usually looking for men who have their own homes, a decent income and good health. Those are the big three."

Lu and Wu seem to have broken the ice a bit, and they no longer look quite so nervous as they stand chatting and leaning against the bridge.

Wu continues: "People need to get to know each other gradually. It's not good to come right out and start asking all these questions so boldly."

Lu nods his head. "You've got the right idea. Some women start with the heavy questions and drive the men off."

"Yeah, it makes you wonder what their motives are," Wu agrees.

The pair decides to go for a walk next to the stream to get to know each other better. Whether they go beyond that is anyone's guess. Or perhaps it depends on their yuanfen.