Accessibility links
Madoff Scheme 'Too Good To Be True' Erin Arvedlund was among the first to report on the many suspicions about financier Bernie Madoff, in 2001. In her book, Too Good To Be True, she reports on how Madoff managed to fool investors, and the SEC, for so long. 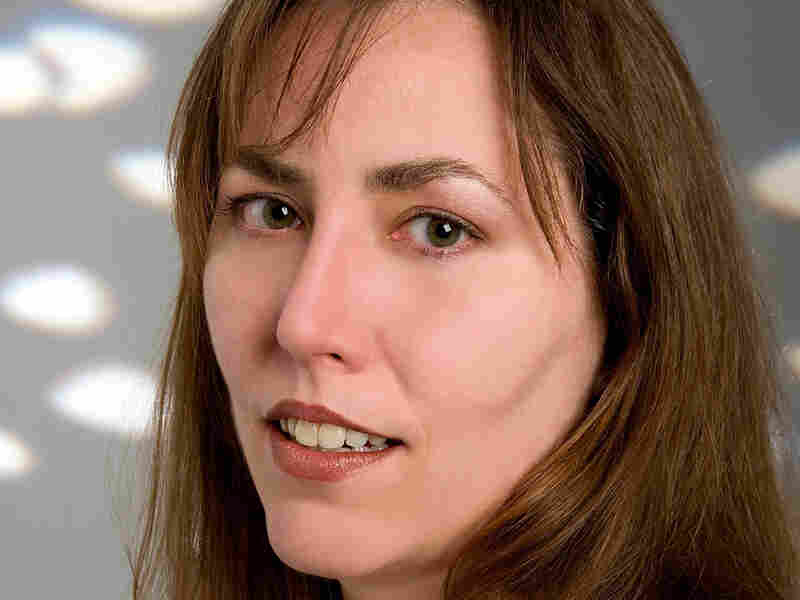 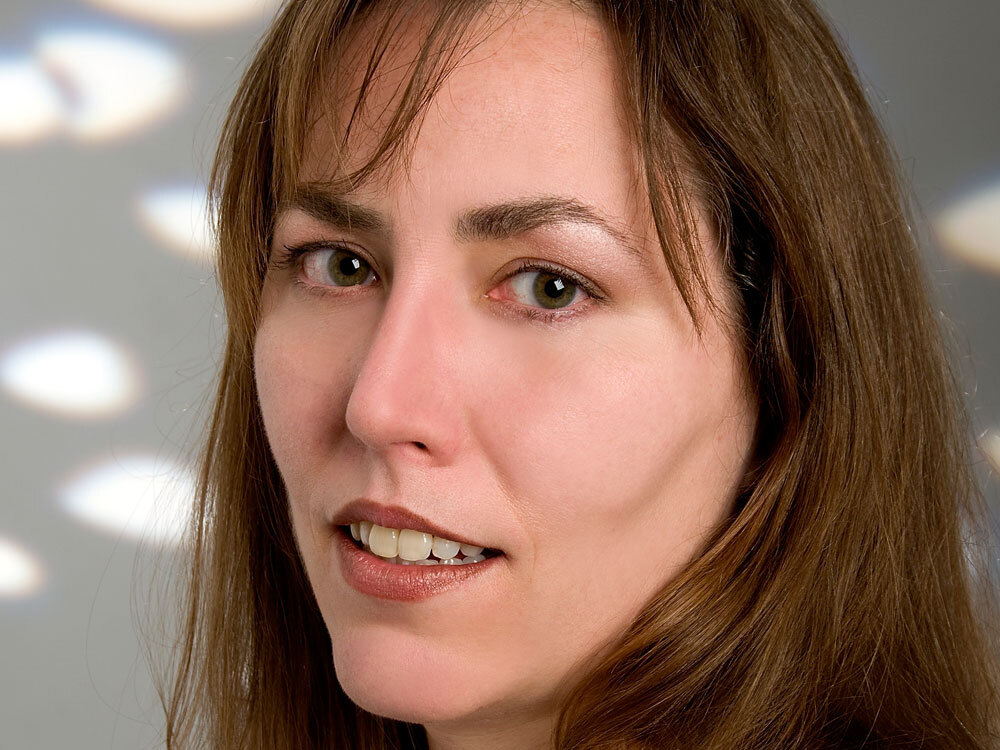 Erin Arvedlund was among the first to report on the many suspicions about financier Bernie Madoff, in 2001. Her article for Barron's investigated Madoff's fund's "stunning double-digit returns." But her article, and a few other investigations, failed to sound an alarm.

Once Madoff's fraud came to light in 2008, Arvedlund writes, "his name was now equated with a crime bigger than Enron, bigger than WorldCom, bigger even than those of Charles Ponzi himself, the man whose name would grace the type of scheme that Madoff had taken to a whole new level." In her book, Too Good To Be True, Arvedlund reports on how Madoff managed to fool investors, and the SEC, for so long.

Excerpt: 'Too Good To Be True' 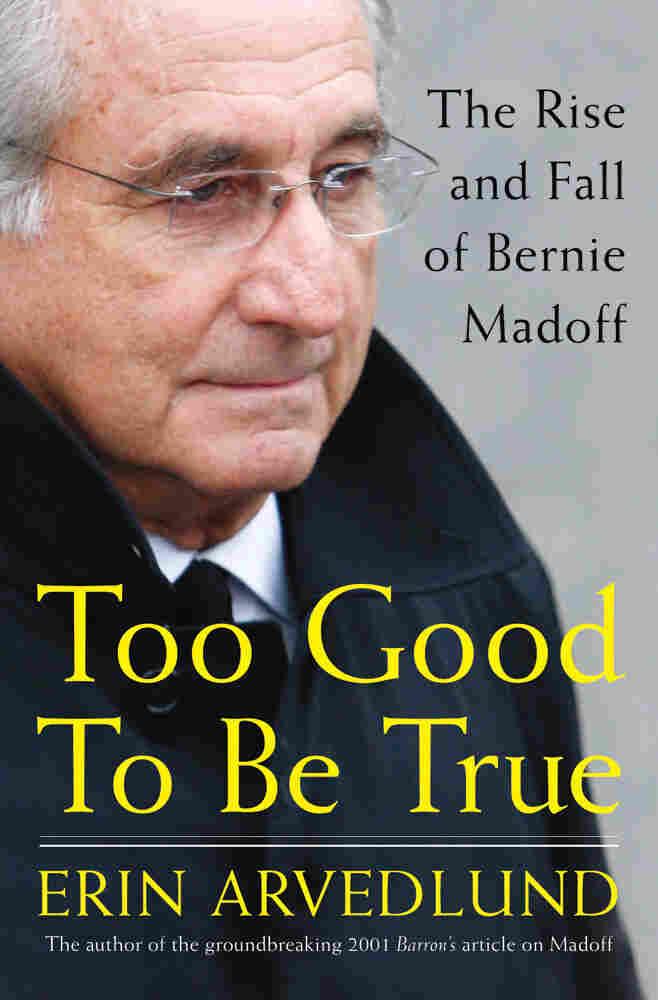 Overnight, America came to know Bernard Madoff as a man living a life of luxury and deception — not just for months or years, but possibly for his entire adult life — paid for with other people's money. It quickly became apparent that much of the vanished money had never existed except on paper. The numbers represented profits that Madoff told investors he had made for them, when in fact he had spent the money they had given him and not invested it at all. The exact amount of actual money lost may never be known. What we do know is that, for decades, Madoff looked his investors in the eye with a smile, shook their hands, and never showed any indication — let alone remorse — that he was robbing them blind. He fooled his closest friends and family, as well as hundreds of university endowments, charities, and pension funds; he stole people's hard-earned savings, their futures, and their dreams by faking investment returns under the cover of a legitimate Wall Street firm. And when he was caught, there was little recourse for his victims because, by then, the money had disappeared. Such is the nature of the pyramid scheme.

Madoff's crime, painstakingly carried out over many years, was audacious but based on a simple premise: he paid earlier investors with later investors' money. This type of scam was made famous in America at the turn of the twentieth century by Charles Ponzi. Although he was not the first to engage in the practice, Madoff expanded the scam across decades and on a multibillion-dollar scale. The effects of Madoff's lies rippled across the globe, and when he was exposed, investors around the world wondered how he could have managed such a vast fraud for so long without regulators catching on, despite numerous red flags and warnings.

This is one of the many revelations that infuriated Madoff's victims. How did regulatory agencies such as the SEC or FINRA (the Financial Industry Regulatory Authority), which are charged with monitoring financial institutions, fail to notice that one man was operating the largest Ponzi scheme in history? The SEC has said it found no evidence of foul play at Madoff's firm, but there were plenty of warning signs that something was amiss.

In the spring of 2001, I first heard about Bernard Madoff while working for Barron's magazine. Several of my contacts mentioned his name to me and told me he was a hotshot in the hedge fund world, churning out consistent 15 percent annual returns on investments despite fluctuations of the market. Like legendary hedge fund managers George Soros and Julian Robertson, Madoff supposedly ran a $6 billion hedge fund, but unlike Soros or Robertson, Madoff's performance numbers never seemed to show up in any of the usual databases or magazines.

Strangely, Madoff asked his investors not to tell anyone he was managing their money; investors were intensely loyal to Bernie and were willing to keep their money with him for years. But others I spoke to were wary of Madoff and said his investment strategy did not make sense; even experts in his so-called strategy couldn't duplicate his returns. After no luck getting an interview, I phoned his office one more time to say the story was running anyway. Suddenly, he was made available. Over a scratchy international phone line, Madoff told me he was in Switzerland; I asked Madoff how he was able to accomplish his amazing returns. "I can't go into it in great detail. It's a proprietary strategy." Madoff further dismissed skeptics who tried to reverse-engineer his secret formula, saying they "didn't do a good job. If he did, those numbers would not be unusual." He sounded untroubled, affable, and didn't tell me much of anything.

In May of that year, my article on Madoff ran in Barron's. It quickly became watercooler fodder in Wall Street circles as it questioned how Madoff could be making such great returns using a strategy that other investment professionals could not replicate. Unfortunately, despite the buzz generated by my article, the SEC, Madoff's investors, and others connected to the scam turned a blind eye. Madoff continued to recruit unsuspecting clients around the world.

I was not alone in my suspicion of Madoff. A week before my article ran, Michael Ocrant, a reporter at the industry publication MAR Hedge, published a similar story asking the same questions. His article received the same response: immediate buzz but otherwise a surprisingly lackluster reaction by those who could have intervened. Harry Markopolos, a financial analyst who had been introduced to Madoff's firm in 1999 and was familiar with the strategy Madoff said he used — known as the "split-strike conversion" — realized that Madoff was running a fraud and made it his mission to expose him for the thief he was. Unfortunately, despite Markopolos's years of attempts to out Madoff — including warning the SEC on multiple occasions — Madoff continued to fly under the radar.

Madoff's story is not just that of a financial mastermind and criminal. It is a complex, ever-changing, and expanding tale of a fraud of unprecedented proportions. How did Madoff defraud so many of his clients? How did human nature and his investors' willingness to delude themselves play a role? In a sense, the fraud was a vast, unwitting conspiracy among Madoff, his colleagues, family, friends, and investors. The conspiracy perpetuated a fantasy. Madoff promised returns that were too good to be true, and everyone else conspired to believe his unbelievable promises. Madoff was a master illusionist.

Excerpted from Too Good To Be True: The Rise And Fall Of Bernie Madoff by Erin Arvedlund, by arrangement with Portfolio, a member of Penguin Group (USA), Inc. Copyright Erin Arvedlund, 2009.

In our interview, Erin Arvedlund said that many so-called feeder funds that invested with Bernie Madoff did not reveal that Madoff was the manager, so many retirees never knew they were exposed. This was not true of one company she mentioned. Fairfield Greenwich Group, believing Madoff to be a selling point, did list him as the portfolio manager in many of their funds. 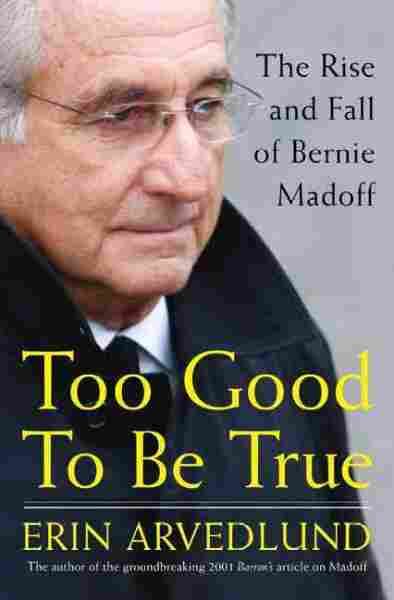 Too Good to Be True

The Rise and Fall of Bernie Madoff