Accessibility links
Ponyo: A Role Model For Kids With Autism? Andy Carvin took his daughter to watch Ponyo. Turns out, his daughter and the animated character had a lot in common. 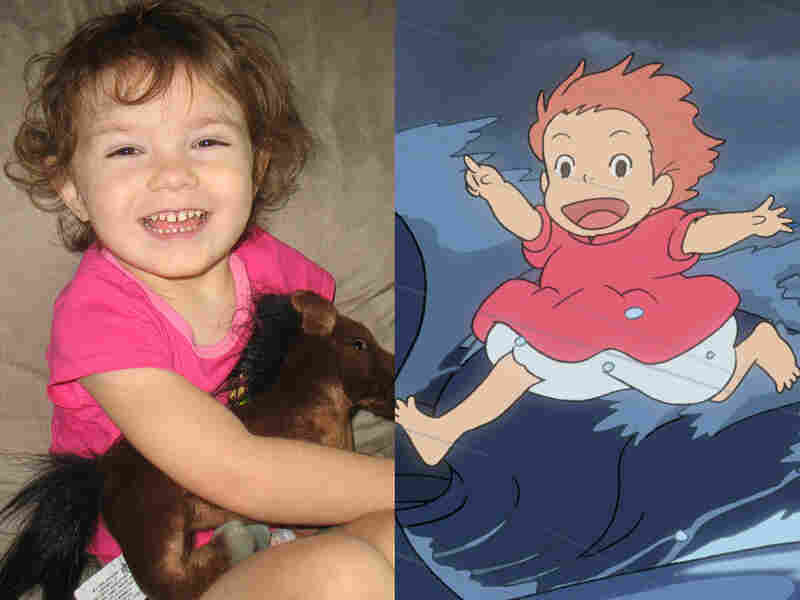 Andy Carvin found more than a physical resemblance between his daughter, Kayleigh, and the animated character Ponyo. hide caption

Andy Carvin found more than a physical resemblance between his daughter, Kayleigh, and the animated character Ponyo.

Yesterday, I took my 3-year-old daughter, Kayleigh, to see her first movie, Hayao Miyazaki's Ponyo. I was probably as nervous as I was excited; my wife and I had contemplated bringing Kayleigh to a movie theater for months but could never commit to it. For us, it wasn't just the potential embarrassment of a toddler crying or having a tantrum. Instead, it was fear of not knowing how a child with an autism spectrum disorder would react to a movie, and how the audience in turn would react to her.

Four months ago, Kayleigh was diagnosed with a condition known as pervasive development disorder not otherwise specified, or PDD-NOS. One of the vaguest and most maddening titles ever conceived for a medical condition, PDD-NOS is shorthand for saying someone is on the autism spectrum, but with varying developmental delays. For Kayleigh it means repeating verbatim what people say to her, using words out of context, having problems following basic instructions and difficulties socializing with peers. The symptoms can be so subtle that many parents (including us for a time) don't realize there's a problem.

So there we were, watching Ponyo, I in my seat sipping my soda, and Kayleigh in her stroller with her sippy cup. For more than 90 minutes, she stared wide-eyed at the screen, grinning and twirling her hair with a finger, occasionally shouting out "octopus!" or "squid!" as she recognized different sea creatures. When an infant appeared onscreen, she called out "Baby Sean!" (the name of her little brother) with mischievous delight.

Ponyo was literally a fish out of water, trying to learn the norms of human interaction, but not always hitting the mark. It's something I've observed time and time again with Kayleigh.

While I marveled at the animation and tried to wrap my head around the more confusing elements of the plot, I was struck by Ponyo herself, the magic goldfish who transforms herself into a girl because she's smitten with a little boy. There was something familiar about her, something I couldn't pin down during the early scenes of the film. And then Ponyo blurted out the word "ham!" to demand that the boy feed her a bit of his sandwich.

At that moment it all made sense. Ponyo was Kayleigh.

For one thing, there was a minor physical resemblance, particularly the reddish-brown hair. But it was Ponyo's mannerisms as she interacted with humans that really struck me. She yelled out one-word answers when she wanted something she liked. She'd sometimes repeat what other characters said to her. She thrived on intense, sustained hugs. She wouldn't always listen before diving into something, as it were. Ponyo was literally a fish out of water, trying to learn the norms of human interaction, but not always hitting the mark. It's something I've observed time and time again with Kayleigh.

At the same time, the character Ponyo is brave, even empowered. She knows she is different from all of her siblings but knows she can make a difference in a little boy's life simply by loving him and helping those around him. And she, in turn, instills love and hope in the boy, despite her various quirks. 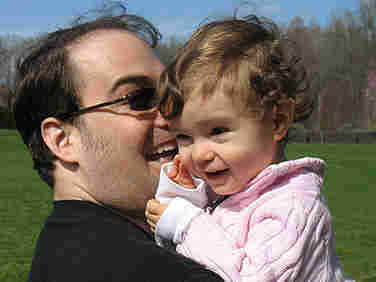 A realistic portrayal of autism spectrum disorders, in all their variety, is almost nonexistent in motion pictures. Ever since Rain Man showcased one particular extreme of the spectrum, there have been few attempts to capture its many facets, including PDD-NOS.

In Ponyo, I found a character who probably was never intended to display signs of PDD-NOS. But there she was on the big screen, reflecting so much of what I see every day in Kayleigh. And Ponyo inspired hundreds of children and parents in the audience, myself included, by wholeheartedly embracing her potential, no matter how others chose to define her.

As we left the theater, I squatted next to Kayleigh and asked if she liked the movie. "Ponyo," she replied, a puckish grin appearing on her face. "Goldfish!" It wasn't much of an answer, but it was enough.