Accessibility links
Medical Fraud Carries A Staggering Price Tag Low estimates say around $60 billion per year is lost to health care fraud. Others say the real figure may be ten times that much. Scams range from submitting claims from fictitious doctors to rent-a-patient schemes. 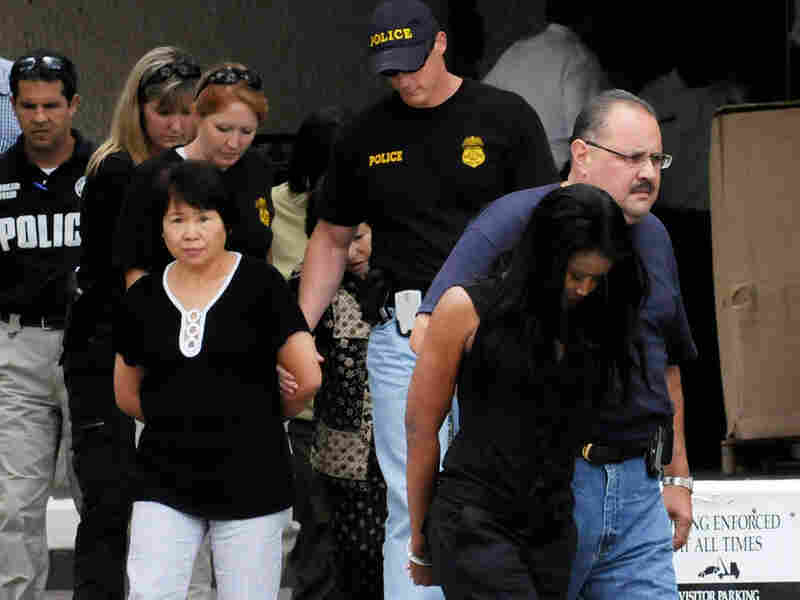 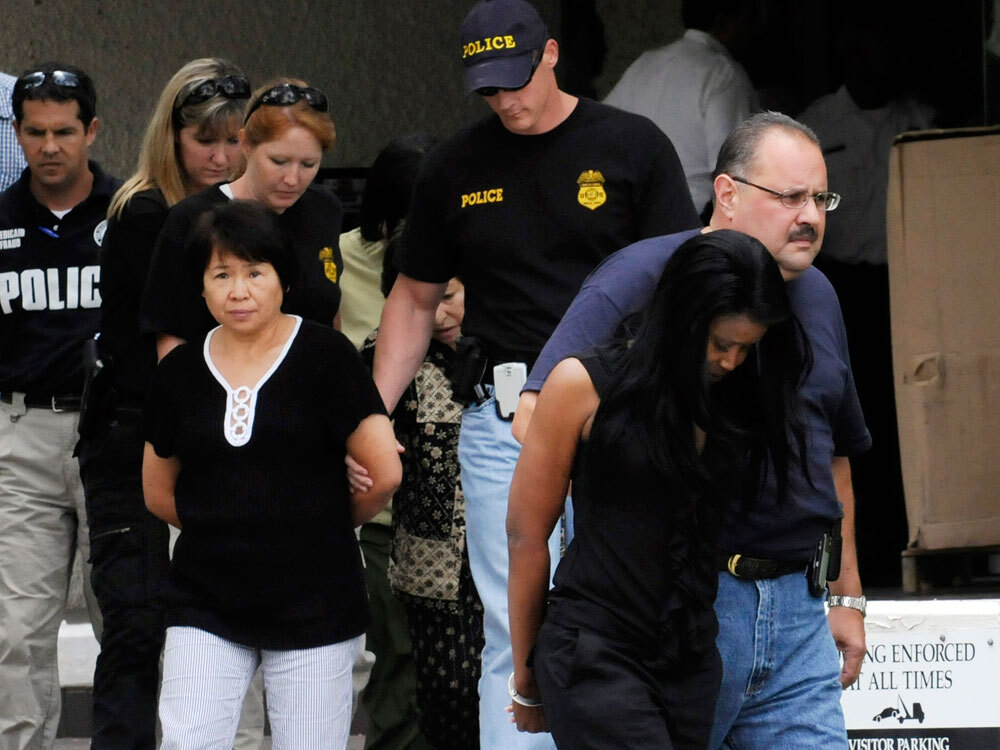 Federal agents escort suspects out of the FBI offices July 29, 2009 in Houston. Federal authorities arrested more than 30 suspects, including doctors in a major Medicare fraud bust.

In the midst of the health care debate, there's a point of certainty. Everyone — Democrats and Republicans, liberals and conservatives — would like to see health care fraud wiped out.

But no one knows just how much fraud there is, and estimates range from from $60 to $600 billion a year lost to medical fraud.

Medical fraud takes several forms. Most commonly, criminals get a list of patients' names, then create fictitious doctors. They send bills to Medicare or Medicaid or health insurers for services supposedly rendered to these patients. By the time the payers figure out that the doctors they're paying are fictitious and no service was ever rendered, the criminals have closed up shop and moved on.

Another popular form of health care fraud is the "rent-a-patient" scheme. Recruiters find people with health insurance willing to get care they don't need, in exchange for cash or cosmetic surgery. Several years ago, insurers and the FBI said they had cracked a big case. People from 47 states were paid to come to California to receive unneeded care, including colonoscopies and surgery for sweaty palms. The doctors who performed the work reportedly charged insurers a total of $1 billion.

In May 2009, the Obama administration announced a new task force made up of officials from the Department of Justice and the Department of Health and Human Services to work on health care fraud. And the current House health care overhaul bill has a number of anti-fraud provisions. It would provide $100 million a year to fight fraud, increases penalties for perpetrators and would require that hospitals and similar health care providers that don't already have programs to reduce the chances of fraud develop one.

But the big question is, how much money could be saved by eliminating fraud?

Whatever the first digit is, it has 11 zeroes after it, he says. "It's just an extraordinary sum."

Louis Saccoccio, executive director of the National Health Care Anti-Fraud Association, has a lower estimate. "We here at the association conservatively estimate that fraud is at 3 percent" of the nation's health care spending, he says. His estimate comes from members of the association, which include health insurers and the federal, state and local agencies involved in investigating fraud.

It's a low estimate, Saccoccio admits. But given that health care spending is over $2 trillion a year, that's still $60 to $70 billion a year lost to fraud. "So it's a significant number no matter how you look at it," he says.

Saccoccio points out there's no way to know for sure. "You can't just go out with a survey to folks who are committing fraud," he says.

The human cost is high. People who get care when they don't need it face the risks and discomfort associated with medical procedures. And whatever the financial cost, it's translated into higher insurance premiums, as insurers raise premiums to make back the lost dollars. And it's translated into higher tax rates to refill the coffers of the government's Medicare and Medicaid programs that have been drained by fraudulent claims.