Accessibility links
Security Is Chief Concern Ahead Of Afghan Elections Campaigning for Afghanistan's presidential election officially has ended. The head of the United Nations mission in Afghanistan, Kai Eide, says there are still weak links in security ahead of Thursday's voting, and he expects more violence. The Taliban have threatened to target polling stations and voters trying to cast ballots.

Listen
Security Is Chief Concern Ahead Of Afghan Elections 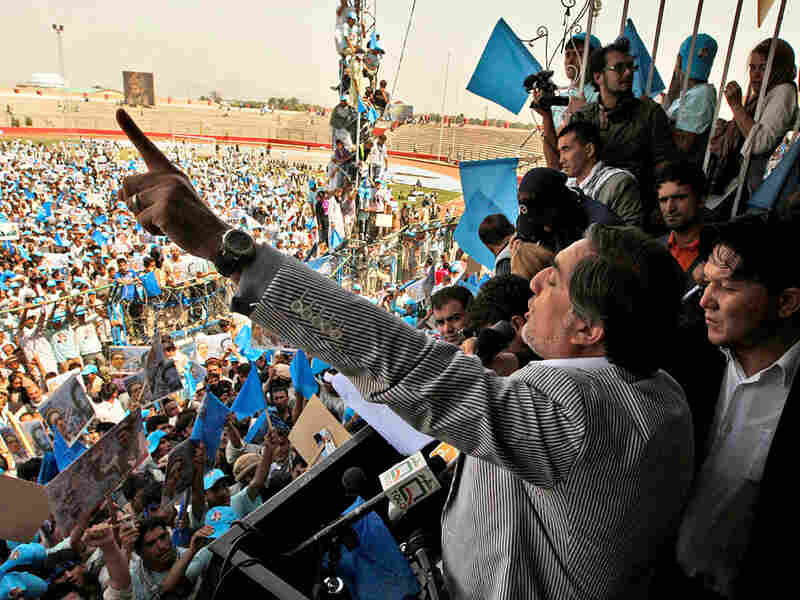 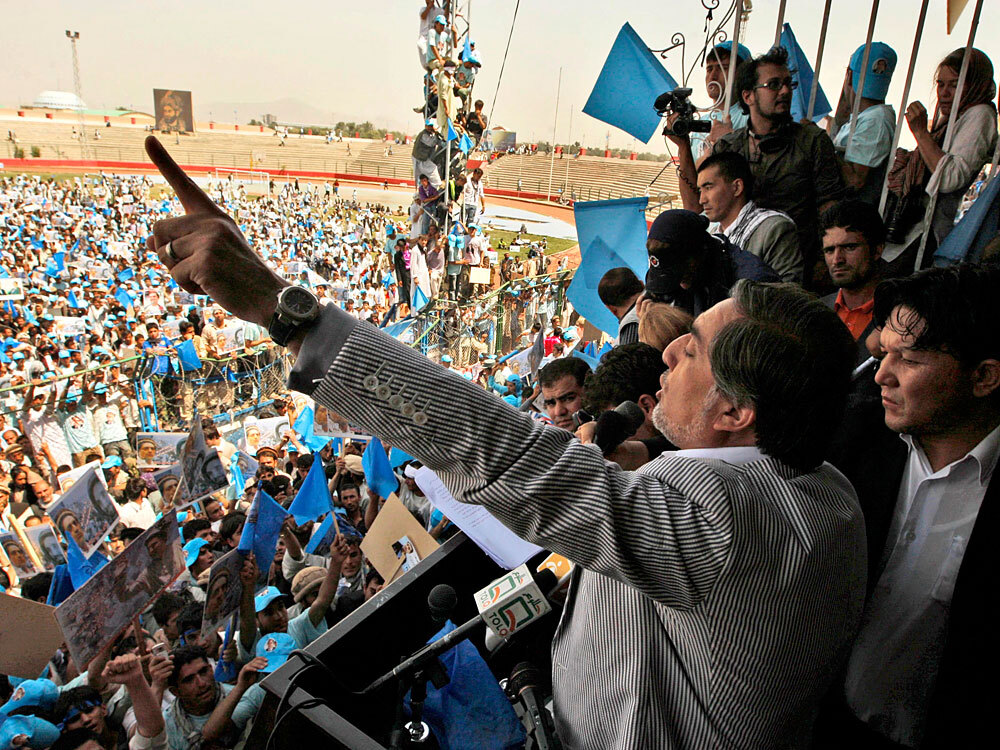 Presidential candidate Abdullah Abdullah addresses a rally Monday in Kabul, Afghanistan. Afghans will head to the polls Thursday to elect a new president.

A suicide car bomb struck a NATO convoy Tuesday on the outskirts of the Afghan capital Kabul, killing at least seven civilians and wounding more than 50 people. Mortar rounds also struck near the presidential palace and police headquarters in Kabul.

The attacks, one day after campaigning ended for the presidential and provincial council elections, have further increased fears about security ahead of Thursday's voting. The Taliban have threatened to target polling stations and voters trying to cast ballots in the first presidential election in five years.

At one of the final campaign rallies Monday, neither the ferocious heat nor the threat of violence seemed to have much effect on the boisterous crowd that came out to show support for Abdullah Abdullah, one of the key contenders in the presidential race.

The crowd of several thousand at Kabul's Olympic stadium grew rowdier as the minutes ticked by. After nearly three hours, when Abdullah finally showed up, the crowd pushed forward to hear him give a passionate speech.

Although the incumbent, President Hamid Karzai, is still ahead in the polls by a roughly 20-point margin, Abdullah is quickly gaining ground.

Like many others, a 50-year-old woman at the rally who goes by the single name Duljohn, says she is tired of the lack of progress under Karzai's watch.

"Karzai's leadership was not so good," Duljohn says. "Now I'm supporting Abdullah to bring change; I hope there will be change."

But it's hard to escape Karzai even at his opponent's rally: An enormous billboard with Karzai's picture hovers above the bleachers. The picture shows his hand outstretched, finger pointing at the podium from where Adbullah is addressing the crowd.

Less than a decade ago, crowds were regularly brought to the stadium to watch the Taliban carry out public executions. Despite being driven from power in late 2001, the Islamist group still has a grip on many parts of the country and threatens to disrupt the upcoming elections.

The head of the United Nations mission in Afghanistan, Kai Eide, says security is the paramount concern in the final few days before the election.

"The danger is there, and the danger is real," Eide says. "We have to expect over the next few days that there will be more attacks and incidents of different natures. That is the major threat against the election, of course. We all know it."

In an effort to temper the violence, tens of thousands of Afghan police and soldiers will fan out across the country into the remotest and most dangerous districts to try to secure the polling booths and protect the voters.

American troops are stationed in one of the most volatile parts of the country as part of the security effort.

Some 10,000 tribal militias also will be dispatched to provide protection for voters. NATO says it will suspend military operating on voting day, but both U.S. and NATO forces will launch quick reaction teams if they're needed.

The U.N.'s Eide says there are still weak links in security. "We need more female searchers that are able to search women to make sure there is no danger of insecurity, stemming from the fact that there could be somebody else hiding behind the burqa with explosives."

Election officials say they're confident that at least 85 percent of the polling stations will be operating. The question is whether fear and intimidation will keep the voters from showing up.