Accessibility links
Falling In Love With Lavender If you're infatuated with lavender's slightly spicy, earthy aroma, you'll love the flavor of this flowering relative of mint. Try it in nearly anything: from cocktails, to roasted vegetables and meats, to creamy desserts.

Falling In Love With Lavender

Falling In Love With Lavender 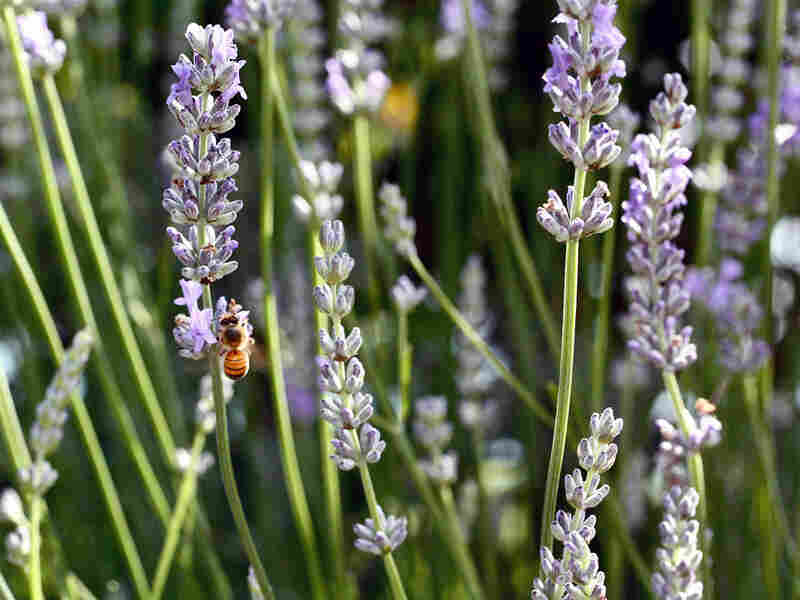 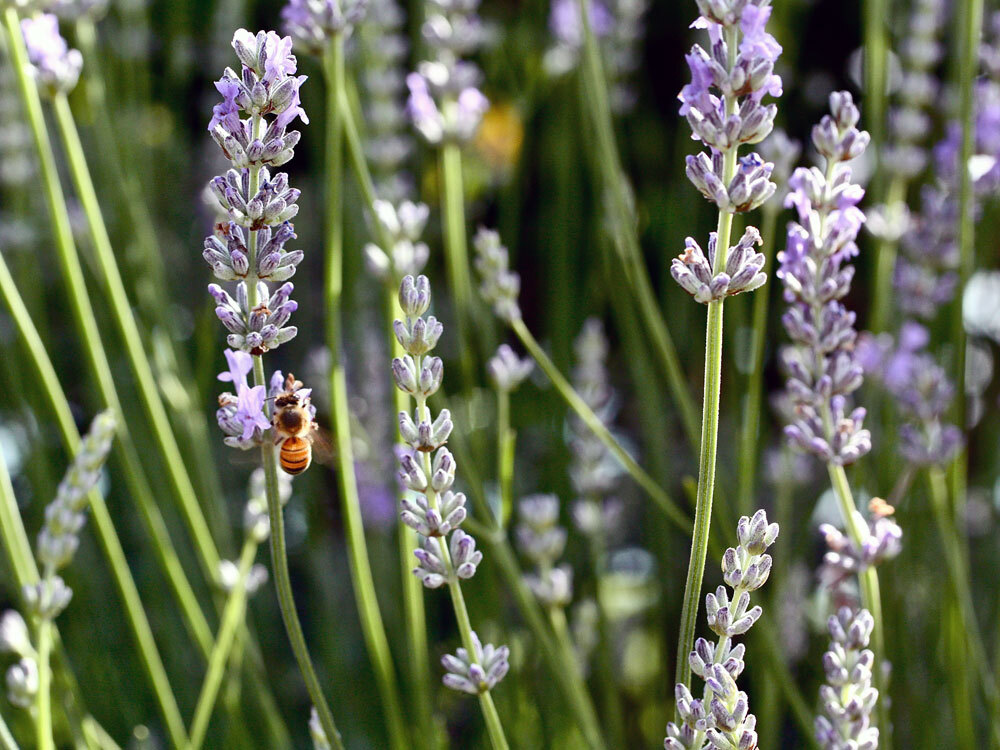 I've long loved lavender for its intense aroma, which draws bees and wanderers alike. I snatch up bars of lightly infused soaps, give sweetly scented candles as gifts, wash my dishes with lavender dish soap, even scrub out my kitchen sink with a lavender-infused cleaning product.

But I had never cooked with it — until now.

Cooking with lavender might be a new love of mine, but it's by no means an unexpected one. I don't go overboard — that is, if you don't count garnishing nearly everything from platters of roasted salmon and grilled asparagus to caramel pots de creme with the pretty purple stuff as overboard. Lately I've found myself coming up with excuses to tuck it into drinks, weeknight dinners and desserts.

I have a penchant for things that are multiuse — baking soda, for example, is a fine environmentally gentle house and teeth cleaner, as well as an essential leavening agent. Or, say, salt — an everyday seasoning that also can ease tired muscles when added to bath water. Lavender is a worthy addition to this list: Rub some lavender essential oil on your temples to soothe a headache, and then cut a fat slice of Lavender-Lemon Tea Cake to sweeten the recovery process.

Wandering one of the vineyards and eyeing the rain clouds lingering over the green hills, I could smell lavender everywhere. Surely something so lovely to the olfactory system could be used to gently perfume and flavor food as well?

In fact, I'd argue that lavender is one of the most multipurpose plants around. For me, however, it's even more than that. To eat dishes that make use of this delicate herb is to bring a bit of the outdoors in.

Lavender's slightly spicy, earthy aroma makes me think dreamily of the purple fields in Provence that I long to photograph someday. And so I hang dried bunches picked from my mother's garden in my apartment to remind me that sometime I'll have a plot of my own in which to plant a glorious herb garden.

Despite my longtime lavender amour, I hadn't cooked with it until a trip to the Sonoma Valley this April. Wandering one of the vineyards and eyeing the rain clouds lingering over the green hills, I could smell lavender everywhere. Surely something so lovely to the olfactory system could be used to gently perfume and flavor food as well?

Nicole Spiridakis lives in San Francisco and writes about food, travel and her native state on her blog, cucinanicolina.com. Her work has appeared in the New York Times, the San Francisco Chronicle, chow.com and other publications.

And it can. I've been making even more excuses to visit Sebastopol, in Sonoma County, Calif., where I grew up, to pilfer bunches to bring back with me to San Francisco. I'll snip a few tablespoons every so often from the flowers I've dried to add to nearly everything from simple syrup for a gin and tonic, to a plate of roasted tomatoes.

Lavender (Lavandula) is part of the mint family and is composed of 39 species of flowering plants. Native to the Mediterranean and the southeast regions of India, lavender's range stretches across the Canary Islands, North and East Africa, and southern Europe. It also can be used medicinally as an external antiseptic, brewed into a tea or compress to ease a headache, as an insect repellent or as a soothingly scented stress reliever via lotion, soap or aromatherapy products.

To pick lavender for culinary use, look for blooms that are almost fully open from plants that have not been sprayed with pesticides. It's best to cut the flowers when the blossoms are dry, around midday, then rub off the buds into a bowl and store away from light until dried.

The plant wants only a lot of sunshine and dry, well-drained soil (one of the reasons it grows so well in Northern California is because our summers are pretty much bone dry from June through September). It's a favorite of bees, and the honey from bees that sip from lavender flowers tastes faintly of the herb.

Culinary lavender is available in some natural food stores, farmers markets and online. Or, if you have a yard or even a large pot, try growing it yourself. It's a perennial, and hardy; the growing season runs from spring until fall (the main thing to remember is to keep the soil well drained).

Though I'm a vegetarian and happily add dried lavender to cakes and savory tarts, a lavender honey-infused glaze would be delicious on roasted meats such as pork or chicken. Or try making lavender sugar: take a tablespoon of lavender buds and mix with 1/4 cup sugar. Process in a food processor until buds have disintegrated, then add another cup of sugar and store in an airtight container. Lavender sugar can be used to sprinkle over cookies, muffins or cakes, or even added to a cup of tea.

When I go home to Sonoma County, I like to run along the back roads near where I grew up. It's a winding route through what remains of the apple orchards once so abundant in the area. If I'm lucky, I'll see hawks perched still and silent on the power lines, Mount St. Helena visible in the distance on clear days.

There's one particular house whose front yard is planted with lavender, and it's the perfect pick-me-up perfume when I pass by, invigorating and soothing at once. I'll take a deep breath, then whisk through the last few miles to come home for a glass of lavender lemonade.

The longer the lavender steeps in the syrup, the deeper the flavor. Use in lemonade garnished with a few sprigs of lavender, or stir into a gin or vodka and tonic.

In a saucepan, simmer the water, sugar and lavender until sugar is dissolved. Remove from heat and let cool. Use or store in the refrigerator for up to a month.

I like to serve this with unsweetened whipped cream and, of course, a strong pot of tea. 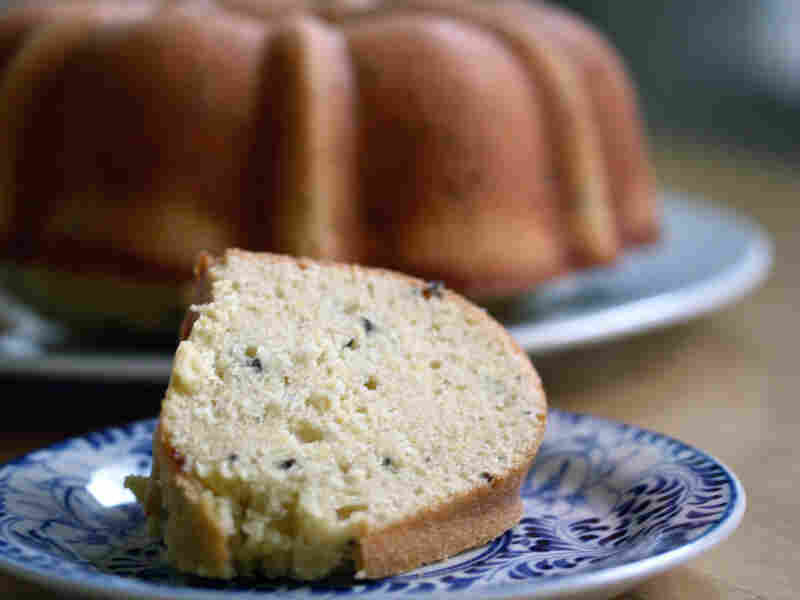 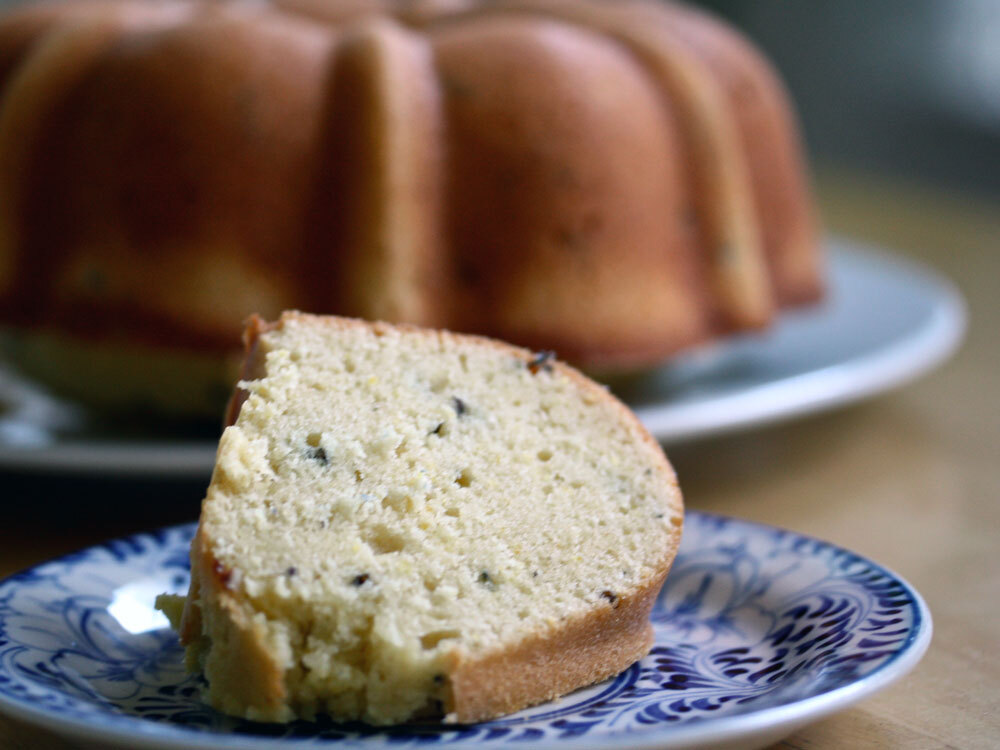 Juice from one lemon

Sift together the flour, baking powder and salt.

In an electric mixer, cream the butter and add the sugar and lemon zest, beating until fluffy, about 2 minutes. Add the eggs one at a time, beating for about 30 seconds after each addition and scraping down the sides of the bowl as necessary. Beat in the lemon juice.

Add half of the flour and beat in on low speed. Add all of the buttermilk, and then the remaining flour, beating on low speed after each addition just until the ingredients are blended. Add the cornmeal and lavender flowers, mixing just until combined. Spoon the batter into the prepared pans and smooth the tops with the back of a spoon.

Bake for 55 to 60 minutes, until the top is golden brown and a toothpick inserted into the center of a loaf comes out clean. Remove from the oven, let cool in the pans on a rack for 10 minutes, then turn the cakes out onto the rack to cool.

Similar to a creme brulee, pots de creme are best when infused with a bit of flavor, such as lemon or chocolate. Using lavender here gives a delicate spiciness that is balanced by the caramel. 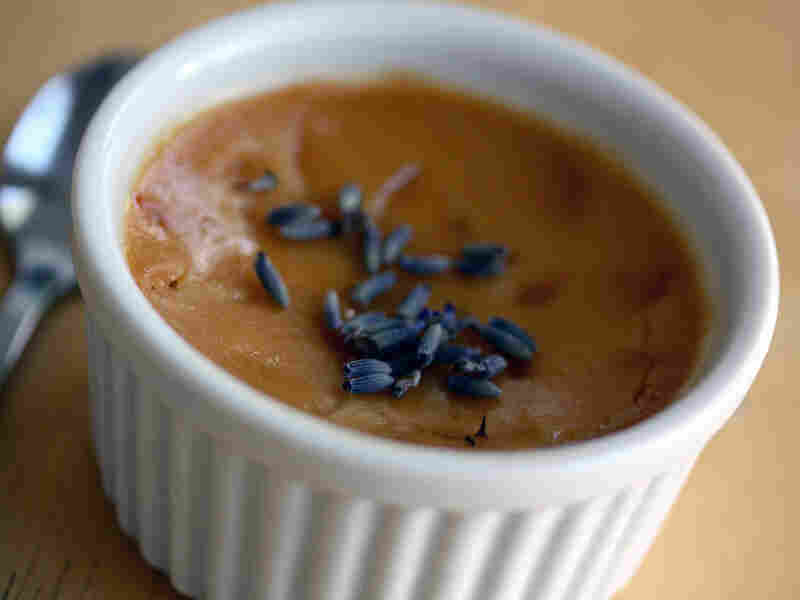 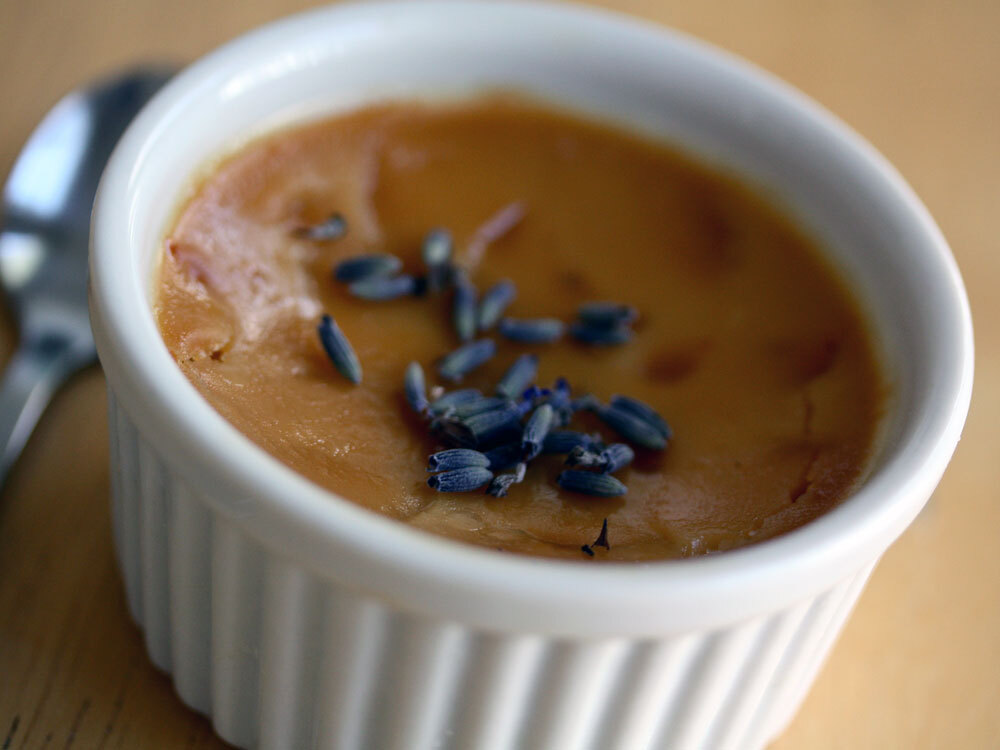 Pour the cream and milk into a small saucepan, add the lavender flowers and heat gently for 2 to 3 minutes, but do not boil. Remove from the heat and allow to infuse for 30 minutes.

Place the sugar and 1/3 cup water in a heavy saucepan over medium-high heat. Cover and bring to a boil. Uncover and cook until the sugar turns golden amber in color and thick, 8 to 12 minutes, without stirring (it will be very hot).

Take the lavender out of the cream with a slotted spoon and then reheat the cream, bringing it almost to a boil.

Preheat an oven to 325 degrees. Have two quarts of boiling water ready.

When the caramel is ready, add the remaining 1/4 cup water and whisk vigorously until the bubbles subside. Pour the caramel into the hot cream mixture and whisk together until mixed. Let cool for about 10 minutes.

In a bowl, whisk together the egg yolks. Slowly add the caramel mixture to the egg yolks, stirring constantly with a wooden spoon until mixed. Strain through a fine-mesh sieve into a pitcher.

Pour the custard into six 2/3-cup ramekins. Place the ramekins in a baking pan. Pour boiling water into the pan to reach about 1 inch up the sides of the ramekins. Bake until the edges of the custards are set, 40 to 50 minutes. Remove the baking pan from the oven and transfer to a rack to cool for 10 minutes.

Remove the custards from the water bath and let cool. Refrigerate for several hours or overnight until well chilled. Serve chilled or at room temperature.

The sweetness of the slow-cooked onions contrasts beautifully with lavender's spicy earthiness. Substitute your favorite pie crust if you like, though I think a subtle undercurrent of olive oil brings all the flavors together. 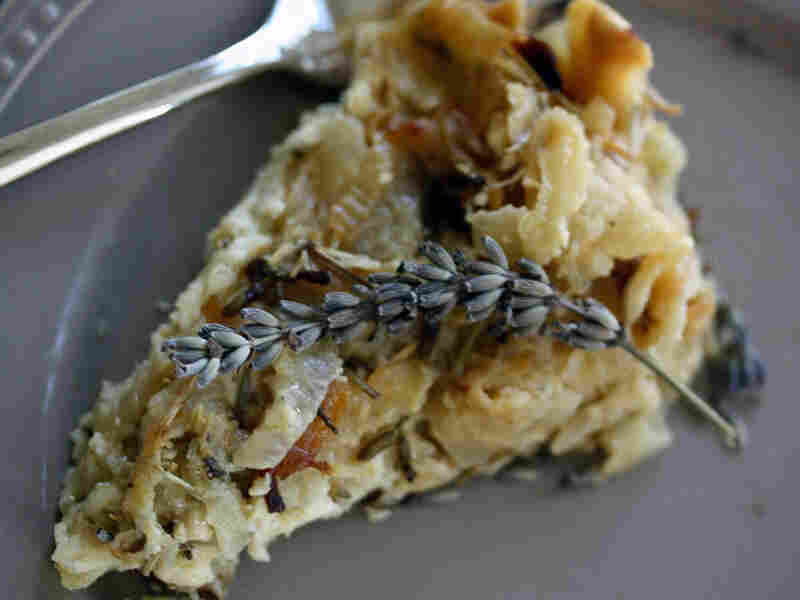 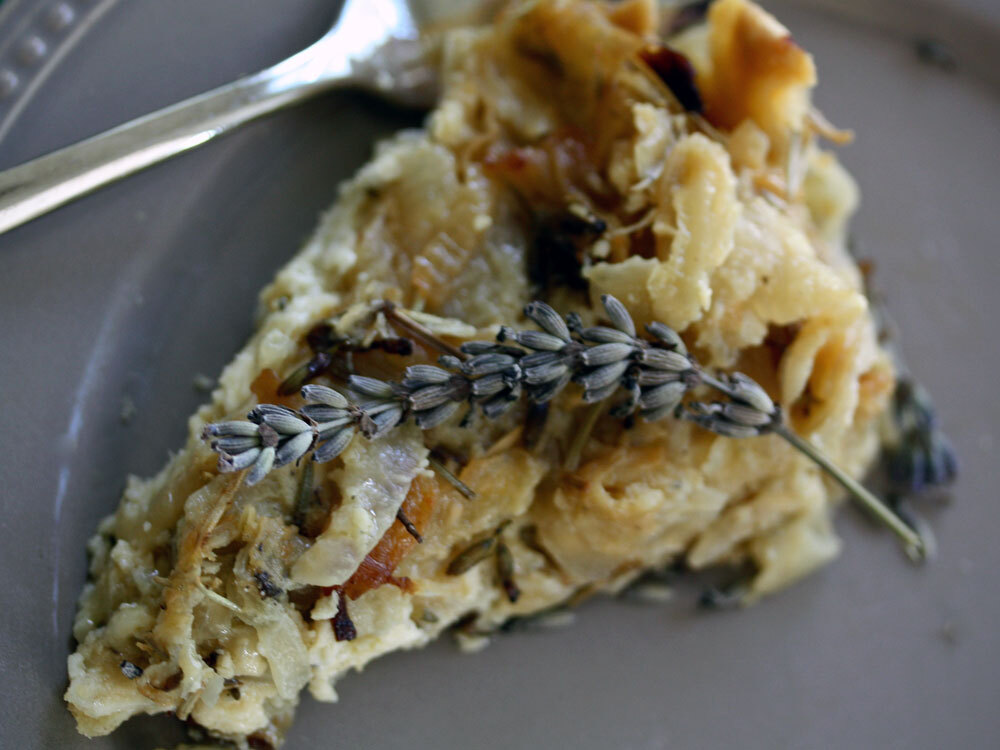 Mix the olive oil into the flour with a fork until it resembles coarse meal. Add the ice water one tablespoon at a time until the dough holds together in a ball.

Wrap in plastic wrap and refrigerate for 10 minutes. Remove, and on a well-floured board, roll out the dough about 1/2 inch thick and place in a tart pan. Prick the bottom of the pan with a fork and bake for 5 minutes. Remove from oven.

Heat oil in a 12-inch heavy skillet over medium-high heat. Saute onions, salt and pepper. Reduce heat to medium-low, cover onions and cook for about 30 minutes.

In a bowl, mix the onions with the egg, feta cheese and lavender. Spread mixture in the tart crust and smooth top. Bake for about 45 minutes, or until onions on top are turning slightly brown and crisp.

Serve warm or at room temperature.

It's tomato season, so use any tomatoes you like. Heirlooms are particularly delicious when roasted, but plum tomatoes are ideal for piling on pieces of toasted bread, or just eaten as they are. 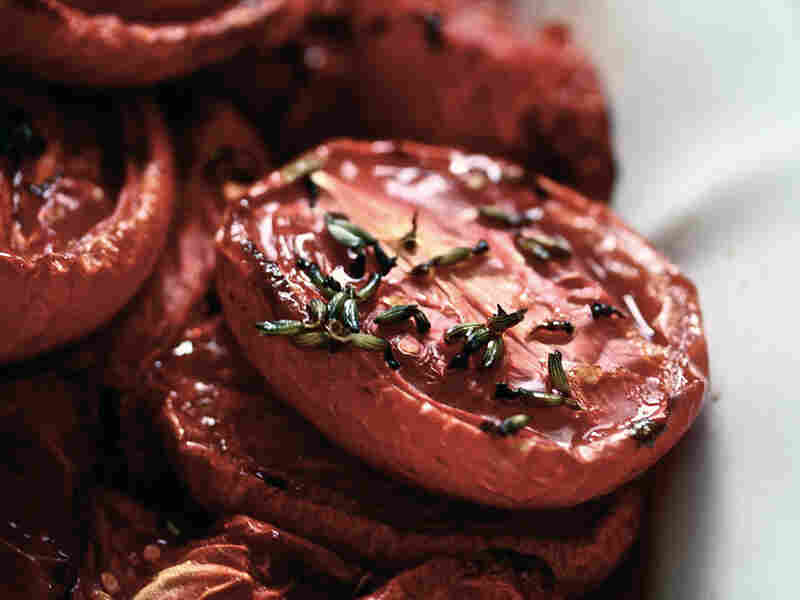 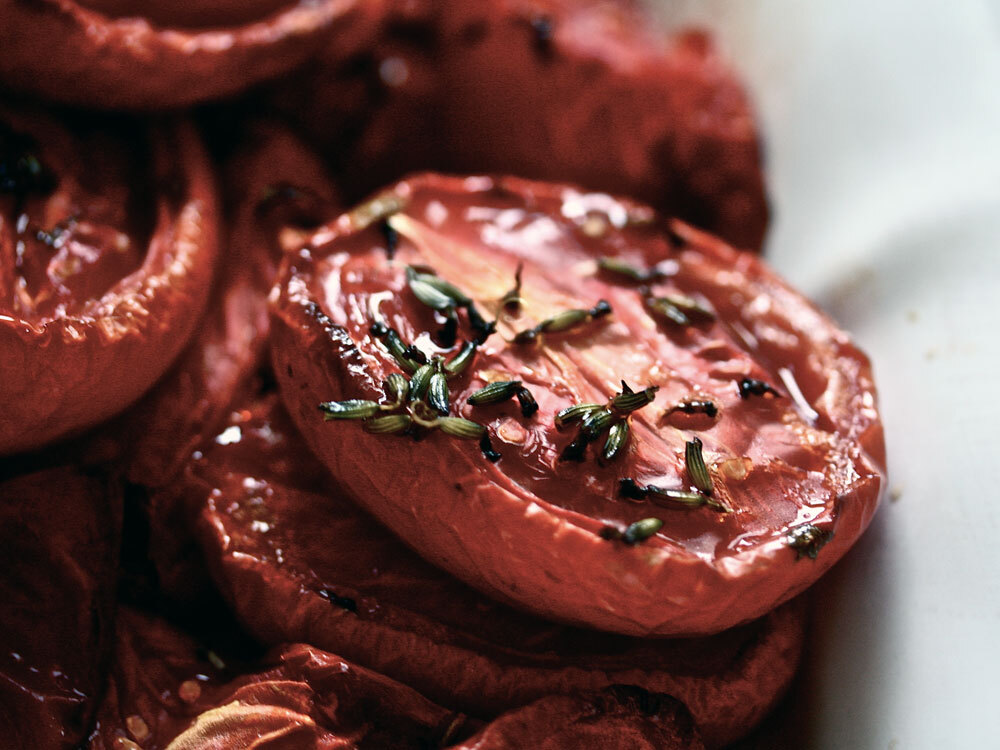 Arrange tomatoes cut side up in a 13-by-9-by-2-inch glass or ceramic baking dish. Drizzle them with olive oil and white wine, and add salt and pepper to taste. Sprinkle the lavender leaves across the tomatoes.

Roast for about 2 hours, shaking the pan to swirl the liquid around after the first hour. Tomatoes should be soft, juicy and a bit wizened along their edges.

Serve hot or at room temperature.