A Booze-Sodden World Without Consequences

A Booze-Sodden World Without Consequences 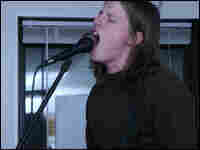 Musically, Alaska conjures images of sweeping orchestral majesty — or, given its history, the acoustic folk-pop of the state's leading musical export, Jewel. But Parker Longbough specializes in the sort of sparkling, decidedly urban-sounding guitar-pop commonly found in college towns. Throughout its songs, keyboards bubble under layered guitar lines and light, occasionally programmed beats.

That isn't to say that Commander Comatose is devoid of acoustic numbers. The disc closes with "3 Drunken Days," a tranquil folk-pop song complete with a shuffling rhythm and well-placed harmonica. It also possesses the album's most colorful imagery, as singer Matt Witthoeft recounts a three-day bender in the carnival atmosphere of New Orleans. As he downs "beer, wine, rum, gin and Jim Beam," the narrator enters the sort of fantasy world many people imagine before going to college, when the idea of drinking heavily contains nothing but allure. It's a world with no hangovers, no consequences and no last calls.