Accessibility links
Pumping Iron Builds Bone Strength For Kids, Too Even kids as young as 5 or 6 years old can strengthen their muscles and bones with resistance training, say physical education researchers. And, the strength training can help kids avoid injury on the sports field or in gym class. 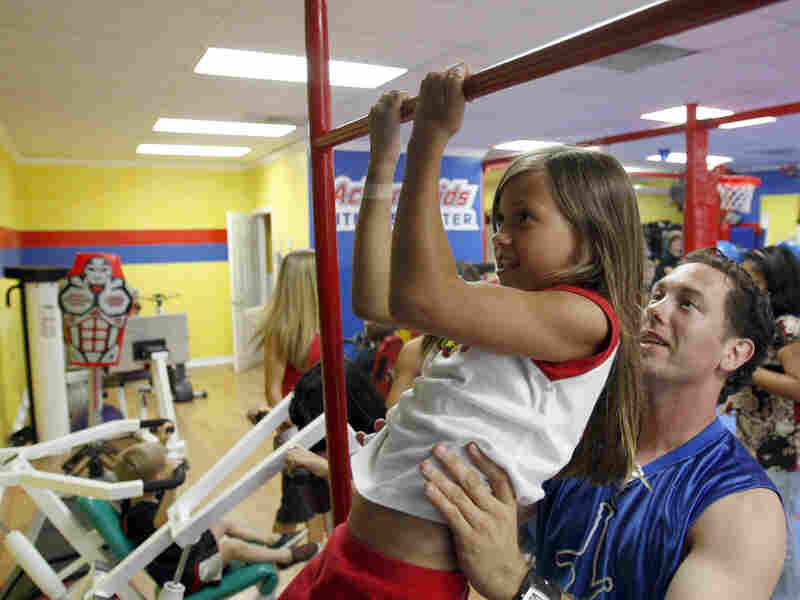 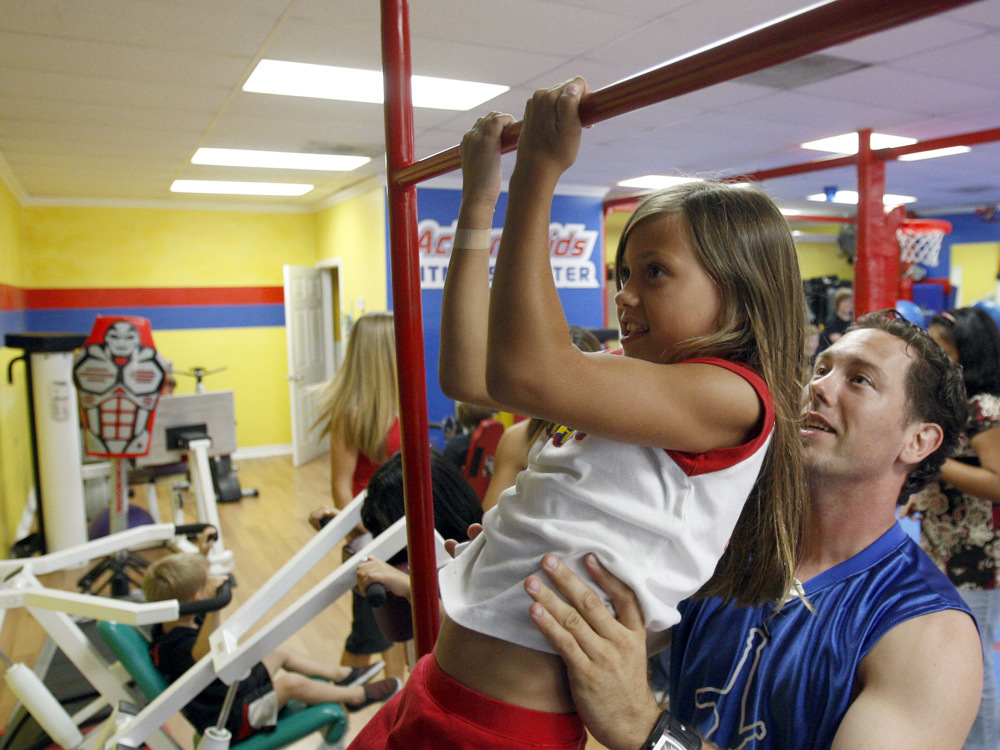 Research shows that resistance training can help build strong bones even in young children. Above, Kaela Ewing, 8, works out with gym owner Steve Ewing at Action Fitness in California.

This fall, many kids on playgrounds and on sports teams will injure themselves, partly because they're not in good enough shape to run and compete safely. Health and fitness experts say that one way to increase fitness before the season starts is weight training. That's right, weight training can help kids, even elementary schoolers.

Forget the image of the muscle-bound man or woman straining and sweating under a metal barbell with 40, 50 or even hundreds of pounds of weight. Physical education researchers say children as young as 5 or 6 years old can strengthen their muscles and bones by strength and resistance training.

When properly performed, strength training can increase bone density and muscle mass as well as tendon and ligament strength. It can also improve joint function. This "preconditioning" can help kids avoid injury in the gym or on the sports field.

Take Jared Guerrero, a Los Angeles native who is just 7 years old. Guerrero has been attending Velocity Sports Performance in West Los Angeles. His mother, Elyse, says she wants to do everything she can to help Jared get a little more fit. He's a bit overweight, so she hopes to help him slim down as well. Every day, the Guerreros try to make sure Jared spends about one hour engaged in physical activity.

And twice a week, he comes to the workout facility at Velocity Sports Performance. Athletes and older kids work out here, but it's also a haven for young kids, who can take classes or work with individual sports trainers like Brock Christopher. Jared's mother hopes the training will give her son a "competitive edge" in sports, but, really, she says, she just wants him to be strong and healthy.

During the one-hour session, Christopher puts Jared through his paces, starting with a warm-up and moving on to sprints and dashes, push-ups, sit-ups, squats and, finally, weights. Working with medicine balls, says Christopher, is a kid-friendly version of weightlifting.

"Its a fun little ball," says Christopher. "Kids have always liked balls — baseballs, soccer balls and now we have one we use here in the sports performance world."

The ball looks like a large soccer ball and has weights in it. Medicine balls can range from 1 to 12 pounds. The balls were used around the turn of last century for rehabilitation with the elderly. The balls saw a resurgence during the 1950s, but their popularity faded. It has only recently surfaced again.

Jared works with a 4-pound ball. Part of the joy of the medicine balls, says Christopher, is that they can be used in a variety of different ways to strengthen different muscles.

In the session, Christopher has Jared hold the ball directly in front of him and then lift it overhead 20 times. Then Jared holds the ball directly overhead for 20 seconds. Then, he does a series of "Russian twists": lying on the floor, holding the ball in his hands and twisting his body all the way to the right and then to the left. During the series of exercises, Jared has worked his arms, abdominals and even lower back.

Years ago, weightlifting got a bad rap, according to pediatric exercise researcher Avery Faigenbaum, who teaches exercise science at the College of New Jersey.

Kids were doing bodybuilding in home basements, lifting weights and hurting themselves because either the weights were too heavy or they dropped them. At the time, concerns were also raised about whether weight-bearing exercise was good for growing kids.

Faigenbaum says weightlifting with barbells can be safe for kids, but they have to be very closely supervised. Medicine balls are simpler, he says. They're less expensive and safer. Even if kids drop them, Faigenbaum says, they're unlikely to hurt themselves.

Research shows that lifting weight can actually help build strong bones, Faigenbaum says. "Some people say childhood and adolescence (under 14) are ideal times to build bone, and if you miss out on this window of opportunity, you may never get it back."

During exercise with a medicine ball, for example, the muscles pull on the bone during every push and pull. In response to that stimulus, bone-building cells migrate to the bone surface and actually start making new bone. Faigenbaum says Olympic weightlifters have levels of bone mineral density well above their non-weightlifting counterparts.

Even simple day-to-day exercises can help build bone, he says. For example, on the playground, when kids engage in hopscotch or jumping jacks they're building bone, Faigenbaum says. With every hop, skip, and jump "the bone bends a little bit and that bend stimulates growth, and over time that's exactly what we want."

And, for overweight kids, resistance training can reduce the amount of actual fat by increasing the amount of muscle. But most important, says Faigenbaum, routine physical activity early on can prepare kids for a lifetime of exercise, with all its cardiovascular and disease prevention benefits.

One footnote, however: Faigenbaum says exercise has to be made fun for kids. "If you lose the fun," he says, "you lose the kids."

It's a notion Velocity sports trainer Christopher couldn't agree with more. He jazzes up Jared's exercise by testing him on one of his favorite topics: state capitals. Jared surges with pride. "Unbelievable!" says Christopher. "Jared excels at everything!"