Accessibility links
Hey, Media: Where's The Afghanistan Coverage? The U.S. has been fighting a war in Afghanistan for nearly eight years; there are 62,000 U.S. troops there. Yet Afghanistan has received just 2 percent of all news coverage since Jan. 1. That's less than Michael Jackson's death got. 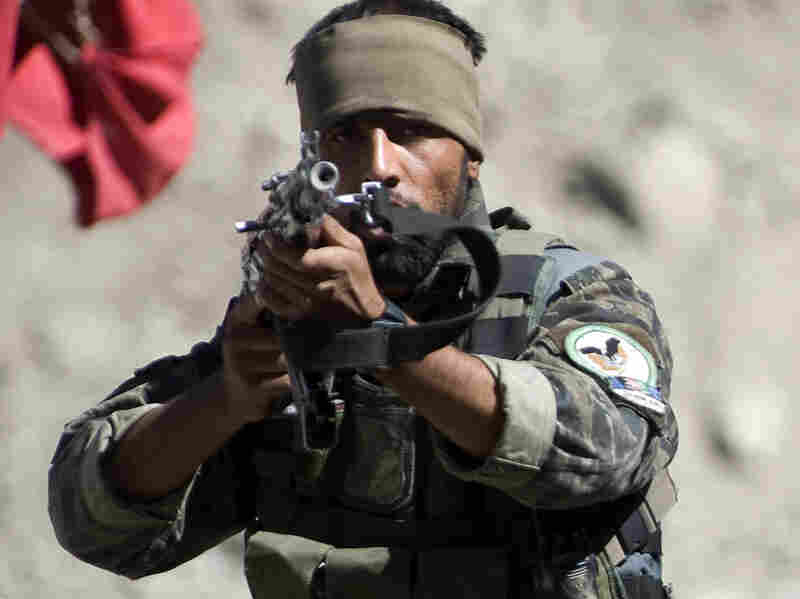 Media coverage of Afghanistan has been hampered by the dangerous nature of the assignment. Pictured above: An Afghan special commando aims his weapon at journalists Wednesday. Pedtro Ugarte/AFP/Getty Images hide caption 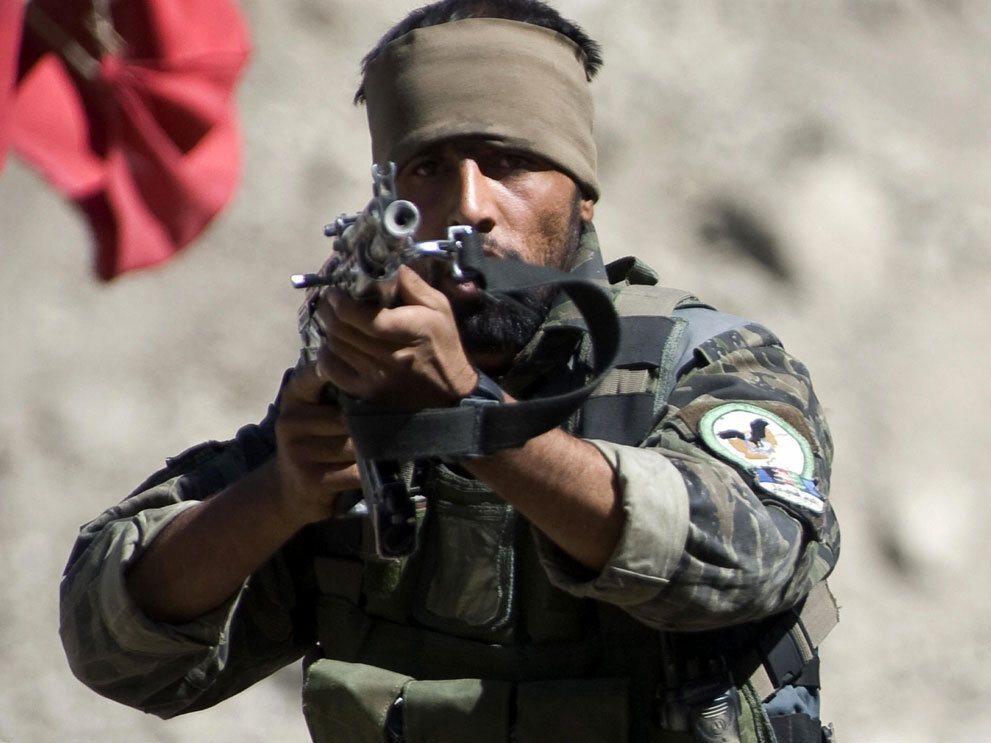 Media coverage of Afghanistan has been hampered by the dangerous nature of the assignment. Pictured above: An Afghan special commando aims his weapon at journalists Wednesday.

In the lead-up to last week's elections in Afghanistan, American media outlets have given the conflict there much more attention than it has received in years. So it may seem churlish to acknowledge the real question: Why haven't you seen a lot more coverage, given that we've been fighting there for nearly eight years?

According to a review conducted by the Project for Excellence in Journalism at NPR's request, Afghanistan has received just 2 percent of all news coverage since Jan. 1.

Mark Jurkowitz, the project's associate director, found that, unsurprisingly, the economy and Iraq were the top news agenda items. The historic elevation of Judge Sonia Sotomayor to the U.S. Supreme Court has received just as much coverage as Afghanistan, and so has the death of pop music star Michael Jackson. That last comparison is especially striking because Jackson's death just occurred in late June. There are now 62,000 U.S. troops in Afghanistan, and more may well be on the way.

"This is not just another war in some Godforsaken place on the other side of the world," says John Sifton, a former senior researcher for Human Rights Watch who has traveled to Afghanistan repeatedly. "This is a place that has a direct relationship to the events of the morning of Sept. 11 and our ongoing security down the line."

But when the Bush administration shifted its attention to Iraq, Sifton says, so did the media and the public.

Iraq steals a lot of the oxygen, and you really have to try to get people to care about [Afghanistan]. It's not easy.

"It's a tough sell for readers and viewers and listeners. They think about the economy, they think about Iraq," says Sifton, now executive director of One World Research, which investigates human rights allegations around the world. "Iraq steals a lot of the oxygen, and you really have to try to get people to care about this. It's not easy."

Meanwhile, the situation in Afghanistan has deteriorated, and since taking office, President Obama has increased the American involvement there. That caught the eye of The Washington Post, which has recently given the subject much more attention.

Spayd says the newspaper has significantly increased its resources in covering Afghanistan, mirroring the administration's investment.

"I'm sure it's going to be an issue that in part defines Obama's presidency as much as any foreign policy issue," Spayd says.

And, in fact, there has been a modest uptick in coverage in recent weeks.

There are three factors worth remembering about the challenges in reporting on Afghanistan. First, it's complicated.

"It's dozens, if not hundreds, of small countries, essentially, that you're trying to cover," says former CNN and NBC reporter Jane Arraf, who was last there in 2002. She is now the Iraq correspondent for The Christian Science Monitor and is planning to return to Afghanistan this fall. "In Afghanistan, there's so much below the surface that I think most of us, myself included, probably, aren't even aware of how little we know about it."

Second, it's dangerous. New York Times reporter David Rhode was kidnapped by the Taliban and held for more than seven months. A photographer for The Associated Press lost his foot this month after being badly wounded by a roadside bomb.

"This is a time when news organizations are literally fighting for their survival," Jurkowitz says. "They're in bankruptcy. They're being sold for pennies on the dollar.

"In that kind of environment, the idea of being able to spend money to send journalists — in a smaller newsroom — overseas becomes not just a luxury, but almost an impossibility," Jurkowitz says.

The Los Angeles Times (on behalf of Tribune Co. newspapers), CNN and Fox News also maintain bureaus there. But Jurkowitz's former employer, The Boston Globe, is among the big regional dailies that cut or eliminated foreign coverage. The Wall Street Journal doesn't have a permanent Afghanistan bureau. Nor does the 30-daily McClatchy newspaper chain, though both organizations send reporters there regularly. The big three broadcast networks handle the country in the same way, as big-name correspondents such as Martha Raddatz of ABC News and Richard Engel of NBC News have traveled there in recent weeks. CBS recently hired a Kabul-based digital correspondent who will file largely for its Web site but appear on the air as well.

A look at TyndallReport.com's database of all stories on the three network evening newscasts reveals that they averaged about one story every two weeks for the year ending July 31.

Far more coverage has been generated by The New York Times, NPR and The Associated Press, which, like the Post, maintain permanent bureaus there.

"I think we're trying to do everything we can to draw people into this story," Spayd says. "I think there's a lot of other factors there that are just competing for people's time."