Accessibility links
Small Farmers See Promise In Obama's Plans Less than 2 percent of America's farms account for half of the country's agricultural sales. The antitrust division of President Obama's Justice Department says that scrutinizing agriculture monopolies is a top priority — a shift that gives hope to independent farmers. 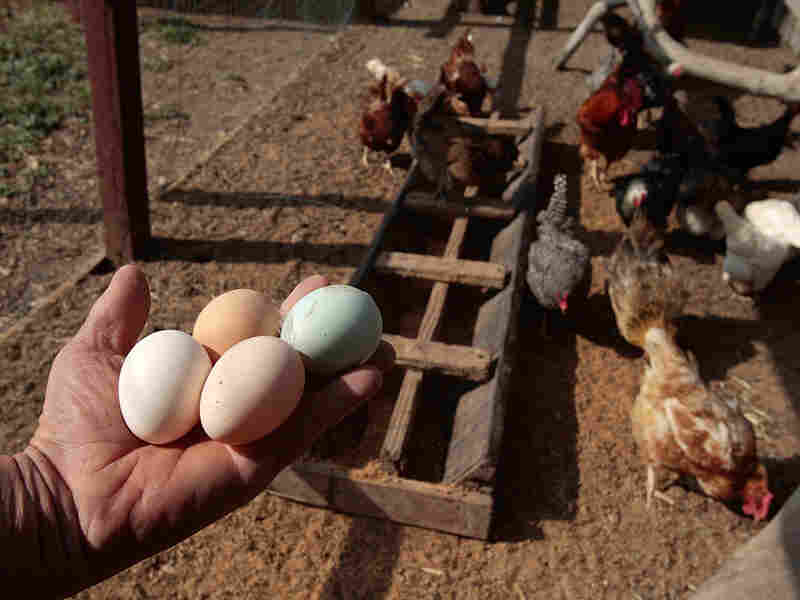 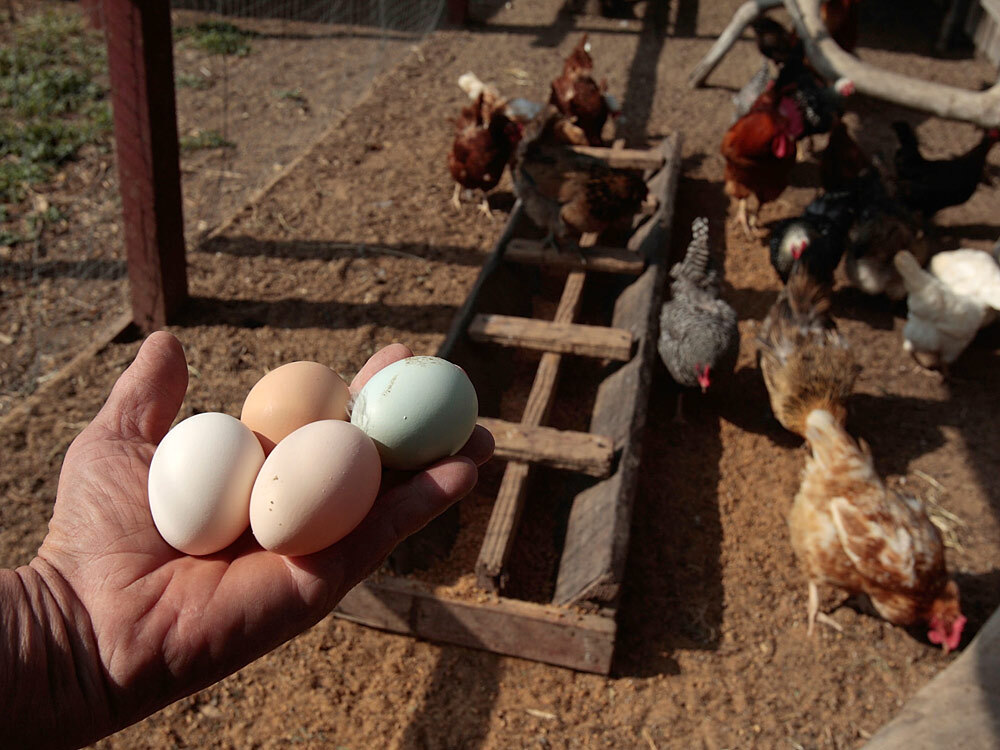 An independent farmer holds freshly harvested eggs on his property in Ontario, Calif.

On Thursday's All Things Considered, John Burnett reports on a dairy farming crisis. With the price of raw milk at historic lows, farms are going under across the country. Many blame two dairy giants they say are trying to monopolize the industry, to the detriment of independent farmers and consumers.

Since the 1980s, American agriculture has become increasingly concentrated. Today, less than 2 percent of farms account for half of all agricultural sales. The new antitrust division of President Obama's Justice Department has said that scrutinizing monopolies in agriculture is a top priority.

That shift is giving hope to independent farmers, who have complained for years that agriculture giants are shrinking the marketplace and paying farmers less for their products.

Earlier this month, the Justice Department sent out a news release that received virtually no attention outside the agriculture-centered press.

Starting next year, the Justice and Agriculture departments will hold public workshops in farm towns throughout the United States to learn about anti-competitive conduct in agricultural markets.

The announcement came one day before the annual convention of the Organization for Competitive Markets. The next day, many among the 150 people gathered at a St. Louis hotel for a session — titled "Confronting the Threats to Market Competition" — could not believe what they were hearing.

Small but influential, the nonprofit, nonpartisan group is made up of farmers, academics and others concerned about the gigantification of American agriculture. Its executive director is Fred Stokes, a Mississippi rancher and registered Republican who has been leading the charge for the government to intervene.

"We want to stop this rubber-stamping of every ag merger that comes down the pike," Stokes said. "We want to call in the predators that are putting our farmers and ranchers out of business. We want them to do their job."

At the conference, the speaker everyone was eager to hear was Phil Weiser, deputy assistant attorney general. He's the "top cop" overseeing Big Agriculture, after being selected by Christine Varney, new head of the antitrust division.

"We recognize this is a very important sector," Weiser said. "This is something that Christine Varney has placed a huge emphasis on. And we need to learn more about it."

It's not the sexiest quote. But just the fact that Weiser came to deliver his first speech since getting his new job to a group of farmers and activists was seen as a break from the Bush administration.

David Balto, a longtime public-interest antitrust lawyer, says it's hard for people to understand how unprecedented the upcoming joint Justice/Agriculture hearings are going to be.

"Typically, antitrust enforcers sit at their desk and wait till the phone rings, and then decide whether or not to open an investigation," Balto said.

"[Weiser's] saying, 'We're going out there into the areas and meet face to face with farmers,'" Balto said, "and I think they'll get a much more profound understanding of why farmers are being egregiously harmed by the lack of antitrust enforcement."

Seeing A Threat To A Lifestyle

The antitrust enforcers will likely hear from people like Don Quamby, a hog farmer from Wellsville, Mo.

"With the hogs, it's gotten to be where you can't make any money anymore raising them, because the packers own everything," Quamby said.

He said he came to the recent meeting because he's deeply concerned about the death of independent hog farms.

Asked why consumers should care about the change, Quamby said, "Well, because once the packer owns all the market, they can charge whatever price they want then at the consumer level, once the meat gets to the store."

In agriculture, economic orthodoxy holds that bigger is better. The bigger a food processor or seed company is, the more they can afford for research and development. An economy of scale creates efficiencies that generally mean lower consumer prices.

But that certainly wasn't the sentiment in the hallway outside the meeting room, where farmers wearing plaid shirts and seed caps drank coffee and talked about challenges to their way of life.

"I've got grandsons — 10, 8 and 6," said Jim Foster, who farms in Montgomery City, Mo., "and their ability to raise hogs like I did, as an independent, depends on whether these guys do their job or not."

The Justice Department lawyer told the group that the antitrust division plans to take a hard look at three areas of agriculture.

The first is seed companies. The American Antitrust Institute asserts that in some markets, Monsanto controls 90 percent of the technology behind genetically modified seeds for cotton, corn and soybeans; Monsanto disputes that figure.

The second segment is beef packing. And the third is dairy, where consolidation has been especially dramatic. In the last decade, more than 4,500 dairy farms disappeared every year.

The decline, critics claim, is at least partly the result of collusive and exclusionary tactics by Big Milk.