Accessibility links
After Summer Shutdown, Ohio GM Plant Reopens In Lordstown, Ohio, 2,200 people are back to work at an assembly plant where GM plans to build the Chevy Cruze, its new fuel-efficient subcompact. Due out next spring, the Cruze is seen by many as GM's best hope to turn the company around. 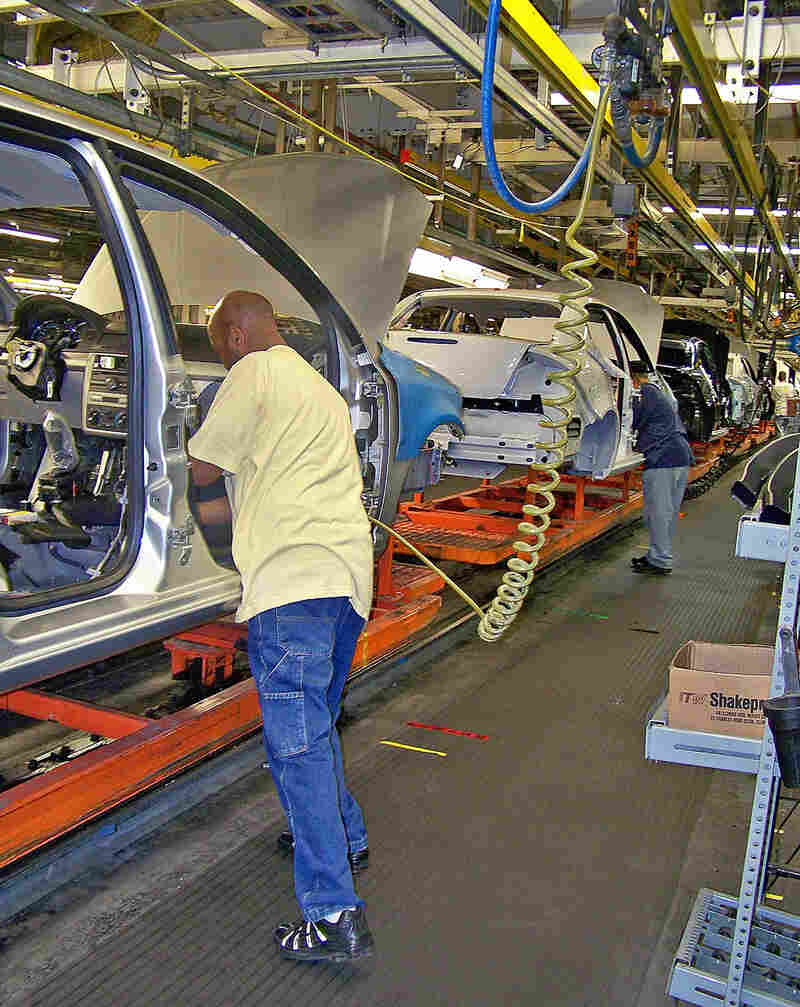 An autoworker assembles a Chevy Cobalt at General Motors' Lordstown Plant in northeastern Ohio. Because of increased demand for the Cobalt, Lordstown will add a second shift this fall. But the upcoming Chevy Cruze is the main focus of the plant now. M.L. Schultze for NPR hide caption 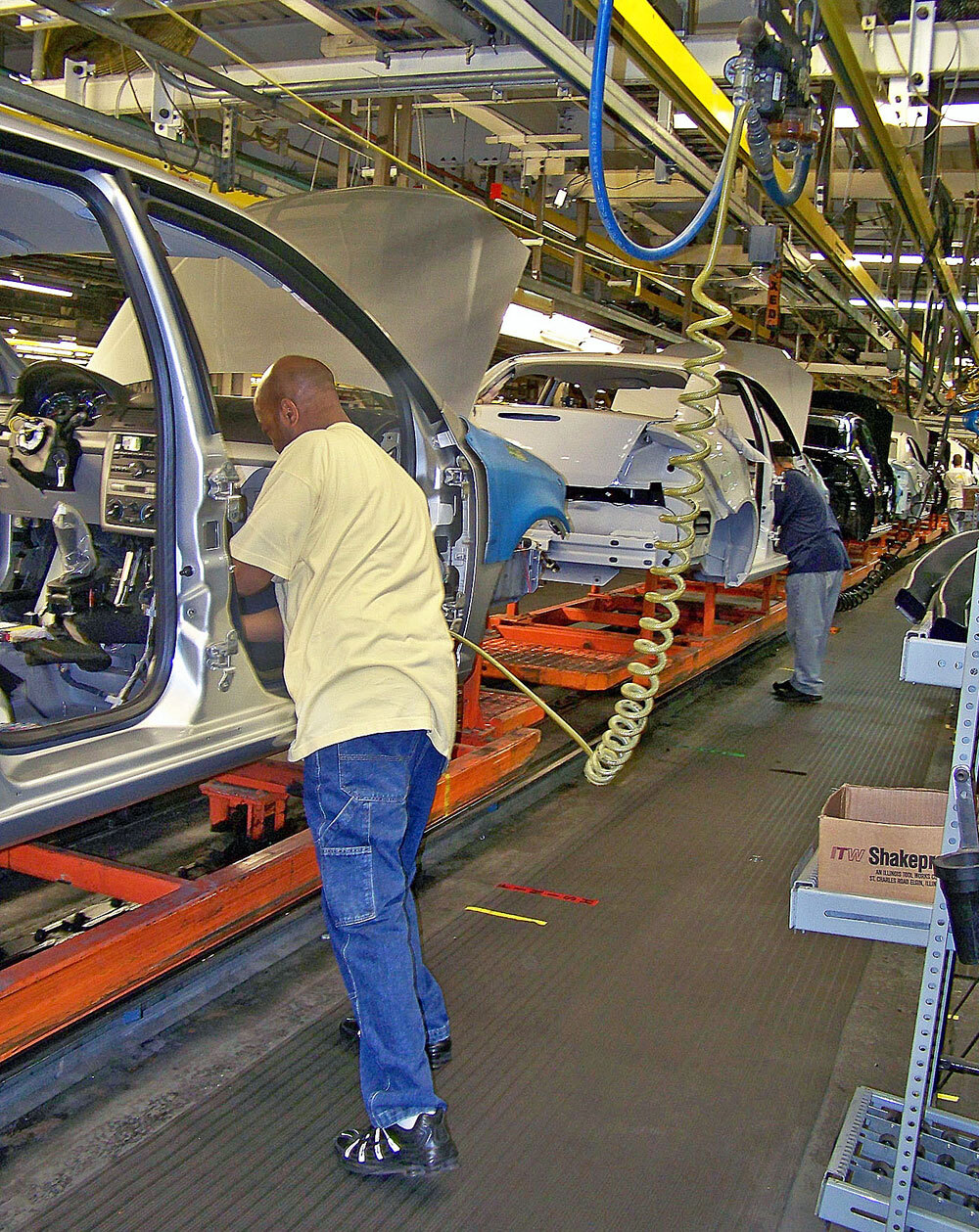 An autoworker assembles a Chevy Cobalt at General Motors' Lordstown Plant in northeastern Ohio. Because of increased demand for the Cobalt, Lordstown will add a second shift this fall. But the upcoming Chevy Cruze is the main focus of the plant now.

Thanks to hot sales of the subcompact Chevrolet Cobalt, 2,200 people are back to work at General Motors' Lordstown Assembly Plant in northeast Ohio. GM announced this week that they will be joined by nearly 1,100 more this fall.

But it's the Cobalt's upscale replacement — the Chevy Cruze, due out next spring — that is seen by many as the real hope for GM to claw its way back to profitability.

At its peak, the GM assembly plant could have employed every man, woman and child in Lordstown — a village of 3,600 — and still had openings. Lordstown's exit off of the Ohio Turnpike, about 20 miles west of Youngstown, wouldn't be there if not for GM.

So the Chevy Cruze is a big deal. GM has invested more than $350 million in retooling Lordstown with 800 new robots, re-engineered supply lines and a massive new body shop to consolidate Cruze production. Beginning in April, Lordstown will be turning out one of the few small cars GM has designed and developed in decades.

Hopes Pinned On The Cruze

Tiffany King, who has spent a dozen years on the Lordstown assembly lines, remains proud of the cars of the past. But this one, she says, is different.

"Everyone's anticipating it," King says. "There's people at my church that are willing to not buy a car right now because they're excited about the new Cruze."

Even during this summer's nine-week shutdown, some United Auto Workers union members were reconfiguring the plant floor for the Cruze, says David Green, who heads one of two local chapters.

"No offense to General Motors, but it's like we're finally putting effort into a car. We're finally building a small car that's going to have some serious impact on the marketplace. It's essential for our survival and for our future," Green says.

John Donahoe has more than 30 years with GM and took over as plant manager four years ago. So he gets the perk of showing off an early model of the Cruze.

"I took it down to the cruise-in in Hudson, Ohio — the Acme Plaza — and people were just like, 'When are you going to start making it?' " he says.

When asked why people liked it so much, Donahoe points to the styling of the exterior, the plush interior and the fact that it gets 40 miles per gallon.

'We Have To Make It Work'

Lordstown workers, like Jim Graham, don't only want the Cruze to succeed — they say they need it to.

"This car is going to be a major part of the General Motors' backbone, and we know that we have to make this thing work," Graham says. "We have to make it work."

Graham is president of the other United Auto Workers union's local chapter at Lordstown. Two years ago, both locals followed the national union into a strike against GM. Now they're working under a contract filled with wage and work-rule concessions.

But Graham says Lordstown has always had good labor-management relations.

"We are No. 1 — the highest volume plant in the world. At one time, we produced 112 Vegas an hour. And believe it or not, the Vega was a well-engineered car. But because of the demand, we started producing more and more and more per hour," Graham says. "People really couldn't keep up with the work, and that's why it turned into a piece of junk. But the core of our people are still there."

Green, the other UAW president, notes that the core will be doing business a different way because of the Cruze retooling.

"The whole system over here is special because it's flexible. It gives us the ability to build like we've never had before," Green says. "We're gonna be able to change the products in line with market demand, which is huge."

A Boost For Other Businesses

Since she bought A&J's family restaurant up the road from the Lordstown plant in 2006, Terry Golden has had to deal with change just about every day. Six weeks later, GM cut a shift, added it back, then cut two.

Golden says contractors setting up for the Cruze — and good lunch specials — kept her going through Lordstown's summer shutdown.

"I'm hoping that, with GM open, we'll get more business people traveling in and out of the area. Hopefully, we'll get some to-go orders from the GM people themselves, and, I don't know, things will get back to normal soon. They haven't been normal since I opened, actually. I don't know what normal is yet," she says, laughing.

About a year ago, the Lordstown plant had more than 4,000 workers on three shifts. About 2,200 returned this month after the nine-week shutdown. Green says many of them have a different attitude.

"I think we appreciate our jobs more today than we have, really, for some decades," Green says. "For some people, you know, you get a job at GM and it's almost like you have entitlements in life. And I think they recognized that there are no entitlements. That anything can happen at any given time. The world has just changed."

What Lordstown workers are hoping now is that the Cruze will give them a new place in that changed world.