Accessibility links
A Camp: Inspired By Wig Powder And Bowie The Cardigans' Nina Persson also plays and records with a two-thirds Swedish trio inspired by wig powder, imperialism and the Bowery. She and her band sat down with Rita Houston to discuss Persson's affinity for David Bowie and Nicolai Dunger.

A Camp: Inspired By Wig Powder And Bowie

Side projects often signify creative freedom and experimentation, and that's surely the case with A Camp, led by Cardigans lead singer Nina Persson. A Camp formed during breaks in the busy and successful career of the Swedish band back in 2001, and it was the release of the project's second album that brought A Camp to WFUV.

Love Has Left The Room

I Signed The Line 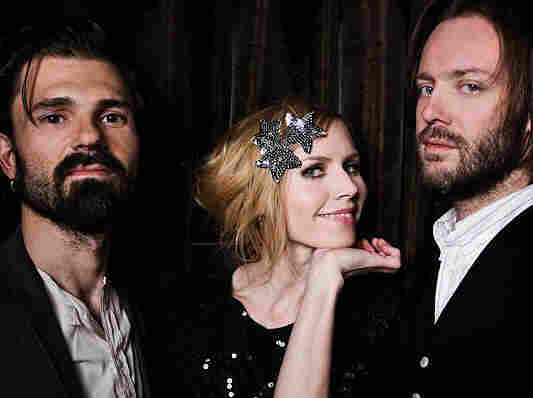 The trio also includes fellow Swede Niclas Frisk and Persson's husband, veteran musician Nathan Larson of the band Shudder to Think. The title of A Camp's latest album, Colonia, hints at the historical imagery that runs throughout the album. Images of wig powder, imperialism and the Bowery provided interesting talking points for this interview, and no doubt continue to inspire A Camp to make music that diverges wildly from that of The Cardigans. Persson's voice remains unmistakable, though, and in our session, her affinity for David Bowie is revealed, as we spoke about Swedish Harlem and our mutual love of Nicolai Dunger.