Accessibility links
Michael Moore's 'Sicko' Flogs U.S. Health Care Director Michael Moore, whose upcoming film, Sicko, attacks the American health care system, is scheduled to have a news conference on Capitol Hill on Wednesday. While Sicko does not open in most theaters until next week, it has already generated considerable attention. 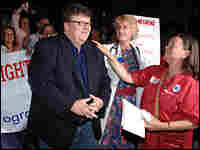 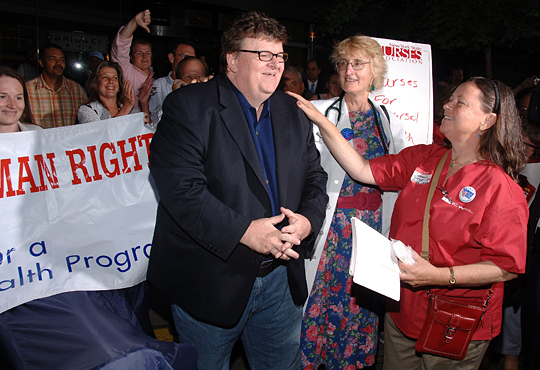 Director Michael Moore, whose upcoming film, Sicko attacks the American health care system, is scheduled to hold a news conference on Capitol Hill Wednesday. While Sicko does not open in most theaters until next week, it has already generated considerable attention.

A visit to Cuba to shoot part of the film might have violated a U.S. trade embargo; the Treasury Department is investigating. Moore has made a lot of noise in the media over the probe, saying he has stashed a copy of the film in Canada for fear it will be seized in the United States.

Some of that is due to Moore's knack for promotion. But he is also known for putting his finger on the public's pulse in such films as Roger & Me and Bowling for Columbine. To some, he is a kind of folk hero; others accuse him of manipulating the facts.

On a recent hot June afternoon, Moore preached to the choir in Sacramento, Calif.

First, he attended a legislative briefing in the Capitol building, cheered on by a crowd of health care workers. Then, he addressed a rally sponsored by the California Nurses Association.

Rose Ann DeMoro is executive director of the California Nurses Association. When her group had a rally in Sacramento a few weeks ago, the local media covered a frog-jumping contest instead. Moore, she said, "brings light" to the health care issue.

Sicko paints a sobering picture of health care in America. It shows sick patients being dumped on skid row in Los Angeles; an accident victim who has to choose which finger to have reattached because he can't afford to pay for both. Some of the worst stories involve those who have insurance but are denied coverage, or who are overwhelmed by high deductibles. In his film, Moore says the consequences are undeniable.

"And the United States slipped to 37 in health care around the world, just slightly ahead of Slovenia," Moore said.

In an interview the day before the Sacramento rally, Moore said he usually has been ahead of the times. But this is different.

"All the polls show that it's the No. 1 domestic issue — and it will be in the upcoming election," he said. "So, maybe this time I will have synced myself up on the same place where the American public is at."

Actually, independent polls, including one by Gallup, indicate that health care is not the No. 1 issue, but it does rank high on the list. Moore hopes Sicko will focus the looming election.

Certainly, some in the industry are concerned. The Pharmaceutical Research and Manufacturers of America issued a statement denouncing Moore's film, sight unseen. A spokesman declined to be interviewed by NPR.

Moore has been controversial from the time he made Roger & Me, his 1989 movie about the ravaging effects of General Motors layoffs on Moore's hometown of Flint, Mich. The film revolved around Moore's pursuit of GM's chief executive at the time.

"My mission was a simple one: to convince Roger Smith to spend a day with me in Flint and meet some of the people who were losing their jobs," Moore said in the film.

Instantly, critics attacked Moore for fudging facts to strengthen his case, or to make Roger & Me funnier. Film Comment magazine cited several examples, including a sequence in which displaced workers met in a pizza parlor with Ronald Reagan — then a presidential candidate — although that point wasn't made clear.

"None of Reagan's luncheon guests got back into the factory in the ensuing years," Moore narrated. "And the only bright spot to come out to the affair was the individual who 'borrowed' the restaurant's cash register on the way out of the door."

Actually, the cash register was stolen a day or so before Reagan's visit. Moore attributes the discrepancy to a misstatement by the restaurant's owner. But such glitches prompted Pauline Kael, the late New Yorker film critic, to label the film "a piece of Gonzo demagoguery."

Kael made Moore out to be a precursor to Sacha Baron Cohen's Borat: Cultural Learnings of America for Make Benefit Glorious Nation of Kazakhstan, exploiting dupes to make his point.

"She was just mad at me," Moore said.

He said that when the film came out, Kael wanted a copy to watch at her home. But he insisted that she attend a regular screening.

"Listen to me, you know, Mr. Guy from Flint making a hundred bucks a week. And I'm going, 'No, I don't care who she is, writing for the New Yorker, make her come down and watch the movie,' " Moore said.

Moore said he regretted that almost instantly. But he dismisses her challenges — and all others — to his films.

"I make sure that all of the facts in my movie are absolutely 100 percent true," Moore said. "And I'm very, very concerned about that, because I want people to listen to my opinion. And that opinion is based on these facts."

Jack Mathews, film critic for the New York Daily News, is not convinced. He said Moore is a brilliant filmmaker but has lowered the bar for documentaries.

Mathews was appalled by Moore's confrontation with gun-rights advocate Charlton Heston in the 2002 film, Bowling for Columbine. The movie implies that Heston attended a rally in Flint just after a 6-year-old girl had been shot and killed.

In the film, Moore appears at Heston's house, snags an interview and asks the seemingly frail actor whether he felt insensitive because the community had "just" suffered the loss of the child. Eventually, Heston walks out on the interview.

"This is her. Please don't leave, Mr. Heston, please. Take a look at her. This is the girl," Moore said.

In fact, Heston attended a rally in Flint eight months after the child was killed. Moore is unapologetic.

The real fault, Moore said, lies with the mainstream media, which, he said, never hold his villains to account.

"I mean, it really is disgusting when a guy in a ball cap with a high school education is the one asking the tough questions," Moore said. "Criticize me? No. Somebody really should show up and say, 'Thanks.'"

Certainly, many health care workers are saying exactly that. But in Sicko, Moore has once again opened the door to critics — partly because he paints the systems in other countries in such glowing colors.

"Everyone, anyone can go to the hospital, can go to a doctor and never have to worry about paying a bill," Moore said. "And those countries – Britain, France, Canada — the people in those countries all live longer than we do."

Even, he insists, in Cuba.

"On average they live, in Cuba, a month longer than we do," he said.

Actually, NPR research suggests that Americans edge out Cubans, but not by much. Moore acknowledged he has heard complaints about supply shortages in Cuba, and that he has heard about long waits for treatment in Great Britain and Canada. But, he said, those reports are "anecdotal." And he is quick to take on those who question him.

"This is the typical NPR: afraid of being accused of having liberal bias — so, let's make sure we attack him enough in this piece," Moore said.