Accessibility links
After 40 Years, John Lennon And Yoko Ono's Bed-In Reawakens In 1969, John Lennon and Yoko Ono spent their honeymoon in bed, in an effort to promote a message of world peace. Now, the World March for Peace and Nonviolence has brought back the bed-in — starting on a Sunday afternoon in New York's Central Park — to raise awareness of nuclear proliferation.

In 1969, John Lennon and Yoko Ono spent their honeymoon in bed. 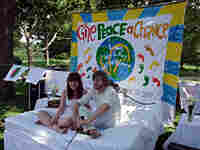 Cameron Miller and Julia West take a turn at the Bed-In in Central Park, sponsored by the World March for Peace and Nonviolence. Margot Adler/NPR hide caption 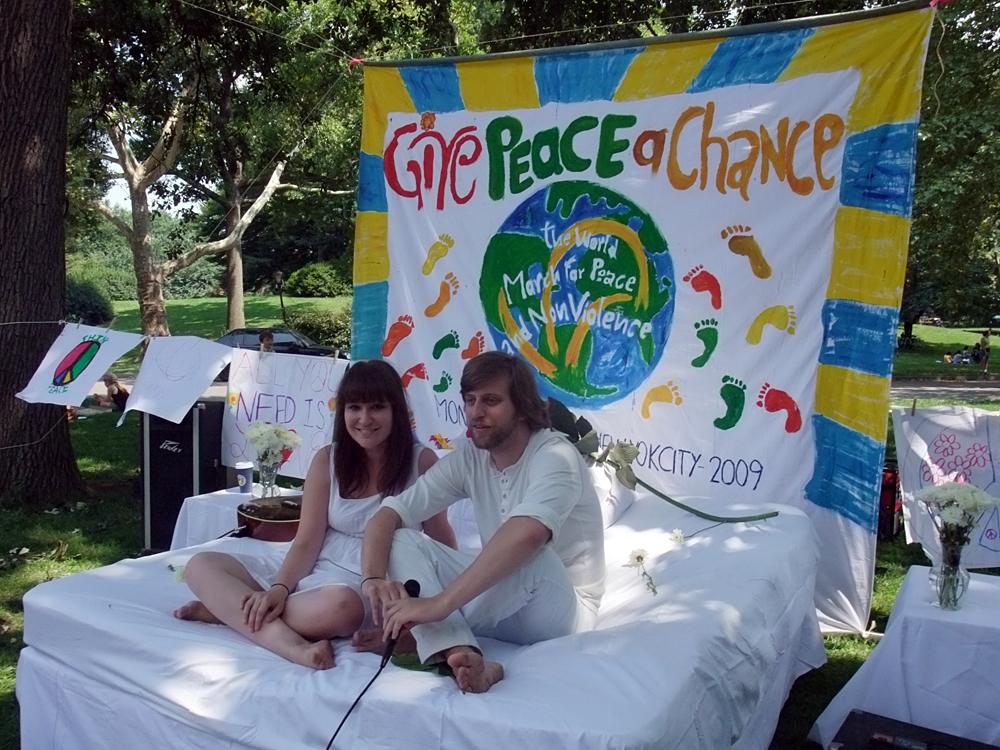 Cameron Miller and Julia West take a turn at the Bed-In in Central Park, sponsored by the World March for Peace and Nonviolence. 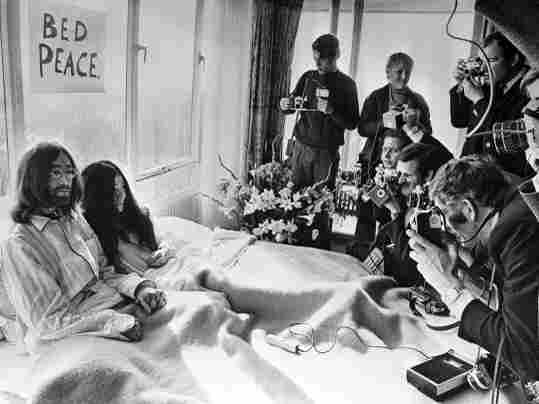 John Lennon and Yoko Ono greet the press from the Presidential Suite of the Hilton Hotel in Amsterdam on March 25, 1969. Central Press/Getty Images hide caption 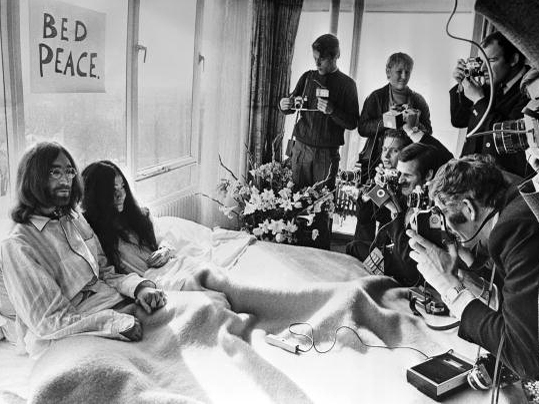 John Lennon and Yoko Ono greet the press from the Presidential Suite of the Hilton Hotel in Amsterdam on March 25, 1969.

The photos from the Bed-In — actually two Bed-Ins, with a week at a hotel in Amsterdam and a week at a hotel in Montreal — have become iconic. There they are, dressed in white, sitting upright and talking to reporters, framed by signs reading, "Bed Peace" and "Hair Peace."

The Bed-In was a publicity stunt: Lennon and Ono used their honeymoon to talk about peace during the height of the Vietnam War and the Cold War. Lennon sang about the event in "The Ballad of John and Yoko":

Drove from Paris to the Amsterdam Hilton
Talking in our beds for a week
The newspapers said, "What are you doing in bed?"
I said, "We're only trying to get us some peace."

Since then, other artists have used the bed to explore similar themes. And this year, an international peace group called The World March for Peace and Nonviolence decided to bring back the bed-in to promote hundreds of global peace events taking place in every continent over the next year. The issue at hand: the spread of nuclear weapons.

So on Aug. 16, the organizers brought a bed to Central Park and put it near Strawberry Fields — only a short walk from the Dakota apartment building where John Lennon lived and the street where he died. There was a big bed with white sheets, fluffy pillows and flowers. Anyone could take the microphone, sit on the bed and say his or her piece on peace.

"Sitting on the peace-bed, I think that my journey for my future, starting right now, is to listen more and learn how to work out differences and learn how to move away from trying to overpower those who disagree," said Gina Moss, a high-school teacher.

Most of the statements were personal. Perhaps 125 people at any one time gathered around the bed. Since the event took place only yards from Strawberry Fields, many tourists who came to pay homage to Lennon could easily find it.

"I asked my son what one thing did he want to do today, and when we got there, we heard about this," Laurie Miller said. "And here we are."

A Mexican runner who had just participated in a half-marathon stepped up to the bed, still wearing his number and his medal. Two Web designers from Brooklyn came dressed in white, just like Lennon and Ono. One of them, Luke Crawford, said it was "important for people to be peaceful in the simple moments, just like in a conversation. Not being aggressive, trying to push your opinion. I think those are the kinds of things that tone us all down and cool us out, and that can ripple out to the world and the way we interact with other nations."

Chris Wells is the North American spokesperson for the World March for Peace and Nonviolence.

"John and Yoko had the vision to turn their honeymoon into a call for peace," he says. "They asked us to imagine a world without violence. It is a call that remains unfulfilled."

After their Bed-In, Lennon and Ono sent acorns to heads of state and tried unsuccessfully to meet with them. Wells and the organizers of the World March for Peace and Nonviolence are planning hundreds of events this fall and winter, in the hope that they might have more of an effect.