Accessibility links
Mariachi an After-School Activity? A new proposal would recognize Mariachi, a form of Mexican music, as an official extracurricular activity in Texas Schools. Texas would be the first state to recognize the music in this way. The W.T. White Longhorn Mariachi Band gives listeners a special treat. 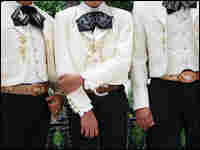 Schools in the Southwest have been teaching Mariachi in the classroom for years. But a group of Texas educators now wants to bring the classic music tradition of Mexico to a new level. The University Interscholastic League — the agency that regulates extracurricular activities, including sports, in Texas schools — is considering a plan to create a special category for Mariachi, which would make it an official extracurricular activity. Texas would be the first state to recognize the music in this way.

While theories loom about exactly how the music came to be called Mariachi — because of its common themes of love and betrayal, some say it stems from the French word for marriage — the sound tends to be unmistakable. As many as six to eight violins, two trumpets, a guitar and a harp create the rich sound and appeal that now reaches far beyond the Mexican border.

Macarena Hernandez, a reporter for the Dallas Morning News, has written about the Mariachi program at the local W.T. White High School. She's joined by Alfonso Gonzalez, who leads the program there. They discuss a growing passion for the music among youngsters.