Accessibility links
For Fido And Friends, Times Aren't So 'Ruff' It costs less to throw the dog a bone than to take the family on vacation. Americans, it turns out, are spending more, not less, on their furry loved ones during the recession. A booming pet culture and growing product marketing may be propelling the pet industry. 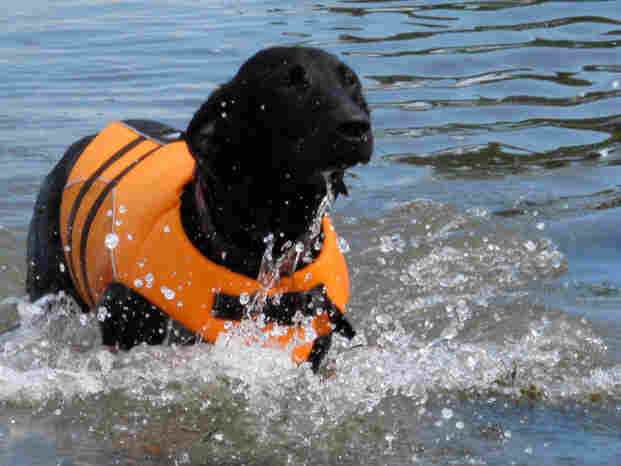 Lucy, the black Labrador, stays afloat in her life jacket — one of the many luxuries she enjoys, even during the recession. Courtesy of Christopher Libertelli hide caption 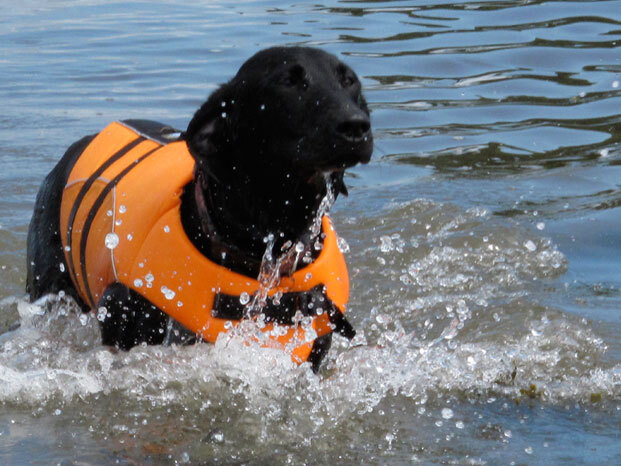 Lucy, the black Labrador, stays afloat in her life jacket — one of the many luxuries she enjoys, even during the recession.

When the going gets tough, the tough have shown they become serious softies about their furry and feathered friends.

Despite the recession, this year Americans are expected to increase their spending on pets to $45.4 billion, up $2.2 billion from last year, according to the American Pet Products Association. Meanwhile, over the same period of time, retail spending on human luxuries, like those bought at department stores, are down double-digit percentages.

Pet products and services are experiencing a financial boomlet in part because of changing attitudes toward pets — as well as a growing industry marketing a broader array of services designed to mimic the luxuries humans offer themselves.

Drug companies are chasing a lucrative market for veterinary drugs. Doggie spas and day cares are catering to baby boomers and childless couples with disposable income. Catalogs are offering more safety and specialized care products. And television shows like National Geographic's Dog Whisperer and movies like Bolt are telegraphing that pets should play a vaunted role in family life.

"During rough economic times, people really look inward, to what's important — that being their family and, in this case, pets as well," says Paul Mann, chief executive of Fetch Pet Care, a national pet-sitting and dog-walking company.

Fetch has seen its business increase nearly 200 percent during the recession — perhaps even because of it. More people are working longer hours to make up for co-workers who have been laid off, Mann says, and find themselves in need of pet-sitting and dog walking.

And with unemployment rising, the people spending more time at home — getting more face time with their pets — might be more inclined to make pet product purchases.

A Member Of The Family

Andrea Doughty is a Washington, D.C., resident and lifelong pet owner who harbors great love for her lanky gray deerhound, Hunter. She admits spending far more on his care than she had on pets past, in part because of a greater general awareness she has now for things like nutrition.

"I try to feed him food that's — if not organic — raised all natural," Doughty says. Hunter feasts daily on chicken carcasses, as well as premium kibble. Doughty says she thinks about it as an exchange of luxury — in down times, giving the dog an extra treat or two is far cheaper than, say, taking the family to the Caribbean.

And when Hunter recently had a seizure, which prompted a $500 vet visit and a subsequent MRI scan that cost several thousand more, Doughty says she didn't think twice about plunking down that kind of money.

"He's a member of our family, you know" she says.

Speaking personally, I do know. We are among the 62 percent of U.S. households that live with pets. Our cat, Phoebe, and black Labrador retriever, Lucy, have incurred their share of both discretionary and uninsured medical costs.

When Phoebe started losing weight last year, I began feeding her a premium line of canned food. She liked it, and somehow I never stopped. And after a dog trainer recommended all-natural food for Lucy, we abided.

French Food For The French Bulldog?

Our penchant for buying things for our pets has landed us on every pet catalog's mailing list, from Orvis to FetchDog, to a company called In The Company Of Dogs. These catalogs offer a panoply of products I recall not being on the market when I was a child — including things like pet car seats, programmable feeders and air freshener-like plug-ins that emit pheromones that calm anxious puppies.

Despite trying to adhere to a stricter household budget plan we dubbed "chill on the bill," we occasionally place orders for new dog collars and — I confess — the plug-in pheromone thing.

But Mike McDermott has clearly surpassed us. McDermott squires a French bulldog named Mac around our neighborhood. Mac and our dog Lucy are best friends.

McDermott — whom we like to call Mac Daddy — recently spent $2,400, plus the cost of a speeding ticket, for an emergency room visit after having given Mac a lamb bone that prompted the dog to vomit blood.

"We considered ourselves lucky," says McDermott, who also cooks chicken for Mac every night.

But that's not all.

"On our Sunday morning walks we go to the Praline French restaurant and I always get him a quiche, because he's a French bulldog so he can have his Quiche Lorraine on Sunday morning," McDermott tells me.