Accessibility links
Nortec Collective: Music For The New Tijuana The music scene of Tijuana once teemed with nightclubs and thousands of American revelers. But border crackdowns because of illegal immigration and drug gangs have changed the character of Tijuana's nightlife and the sound of some of its music. Reporter Corey Takahashi reports on the Nortec Collective longtime Tijuana musicians and how the tighter border has changed their decade-old collaboration.

The music scene of Tijuana once teemed with nightclubs and thousands of American revelers. But border crackdowns because of illegal immigration and drug gangs have changed the character of Tijuana's nightlife and the sound of some of its music. Reporter Corey Takahashi reports on the Nortec Collective longtime Tijuana musicians and how the tighter border has changed their decade-old collaboration. 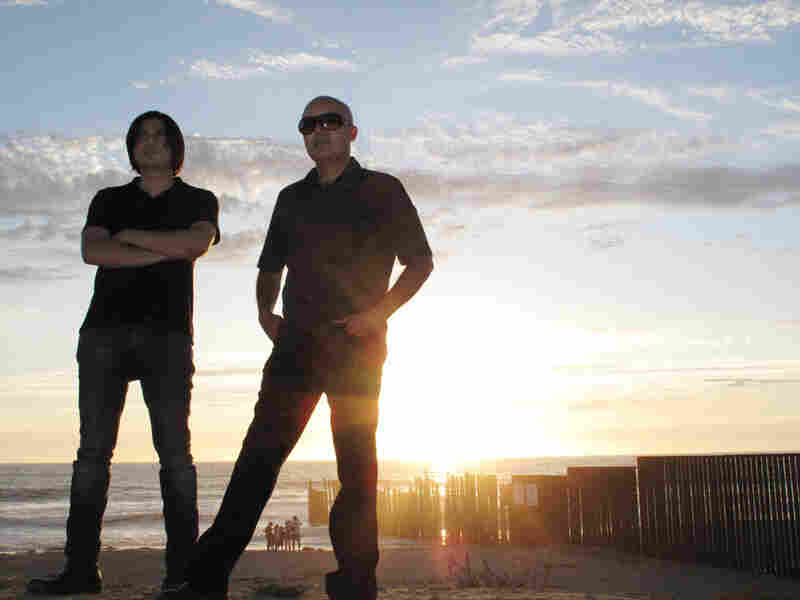 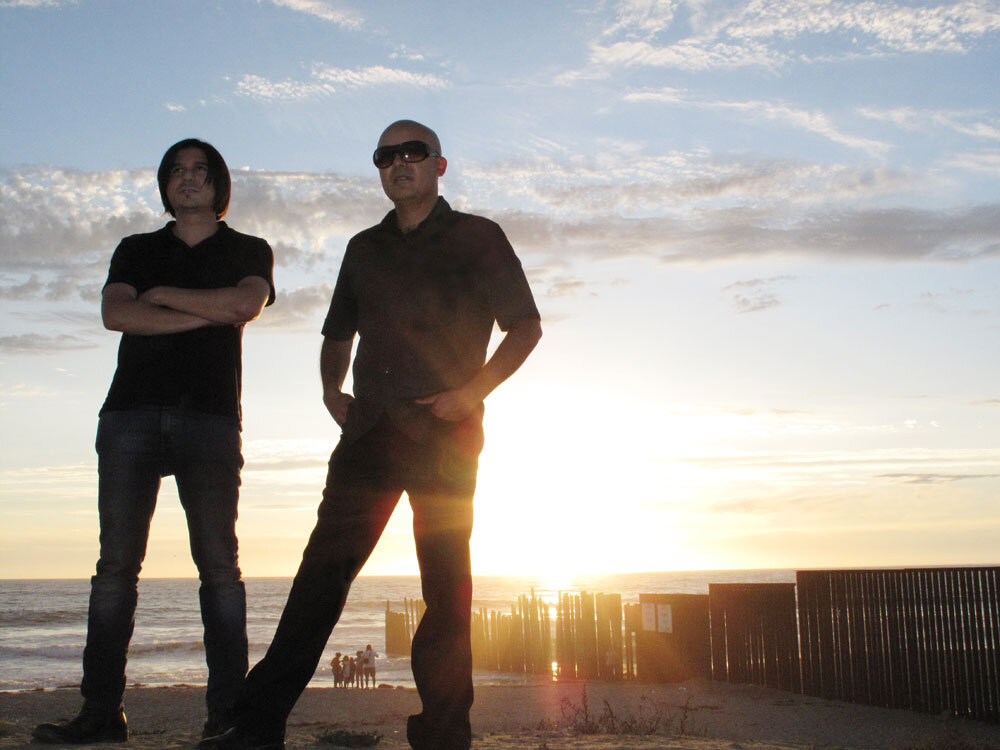 Fussible and Bostich stand at the Mexico-U.S. border.

When you drive through Tijuana, you feel like you're twirling the dial on a radio of live musicians.

"They usually play on the streets or play in the restaurants around here," says Nortec Collective musician Fussible, who shows off a Norteno hangout near his home. There's a bull-fighting ring and a beach, so there are restaurants and a captive audience for folk music from northern Mexico. In this slice of Tijuana, you can listen to plaintive songs about life on the border, and catch a breeze off the Pacific Ocean - while saltwater eats away at the ragged border fence on the shore.

There's music everywhere. "This is normal in Tijuana, to have music very loud," says Fussible. Some of the musicians take requests and play for tips. Fussible, whose real name is Pepe Mogt, gets approached by a few.

Norteno musicians are a traditional, cowboy-hat-wearing bunch. Nortec Collective takes traditional Norteno and reinterprets it through synthesizers, drum machines, and a grab-bag of other digital tools.

The musician Bostich, whose actual name is Ramon Amezcua, composed the song "Tijuana Sound Machine." "We were thinking about a machine, a car that can take you to the imaginary trip to Tijuana," he says. "To take you to different places from our city." The mythical Tijuana Sound Machine appeared on the cover of their last album - it's a rugged, cherry-red lowrider that has speakers for rims.

In real life Bostich drives a dowdy grey minivan - a symbol of his daily routine in Tijuana: He's a father of four and a part-time orthodontist. These have been trying years for his city. A wave of drug violence and kidnappings lead to border crackdowns on both sides. Bostich says that's kept Americans away from Tijuana, including musicians he used to collaborate with. Tijuana culture has turned inward. And Bostich says they began working with more traditional and local acts.

Having been born in Tijuana, Bostich says he's used to the divide between Mexico and the U.S. "We grew up with that border," he says. "And, for us, it's part of our lifestyle."

In his home studio, Fussible uses his computer to showcase some unfinished tracks from their next album. He says the songs are a mix of electronic instruments and acoustic: "It's like having the soundtrack of Tijuana." That soundtrack has always been a cross-border mix of old and new, Mexico and the U.S. But there's a different vibe in Tijuana today.

"Before it was a small fence," says Fussible. "Now it's like a huge wall, with roads and lamps, and helicopters, border patrols, motorcycles and stuff like that. It's like a huge paranoia for the border."

Fussible and Bostich are crossing that border this week, for shows in L.A. and San Diego.