Accessibility links
Uncertainty Surrounds Iran's Nuclear Capability Nothing is simple about Iran and its nuclear program. The subject is highly complex, involving questions of physics and chemistry, politics, diplomacy and the military. Even on the fundamental question of how close Iran might be to acquiring a nuclear weapon, there is much debate. 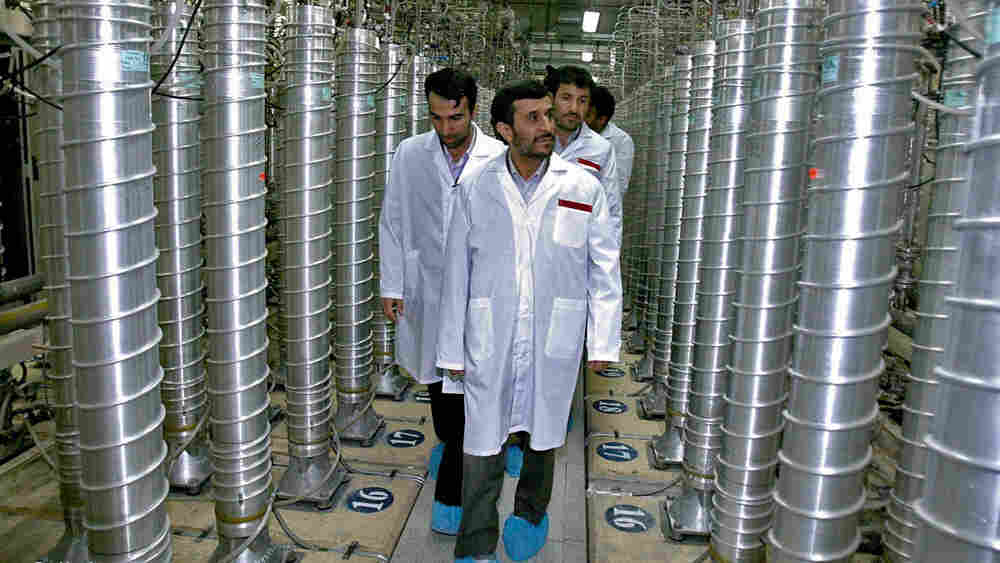 Iranian President Mahmoud Ahmadinejad visits the Natanz uranium-enrichment facilities, about 200 miles south of Tehran, in April 2008. Ahmadinejad announced on Iranian state television during the visit that Iran has begun the installation of some 6,000 new centrifuges, adding to the 3,000 centrifuges already at the facility. The Office of the Presidency of the Islamic Republic of Iran via Getty Images hide caption 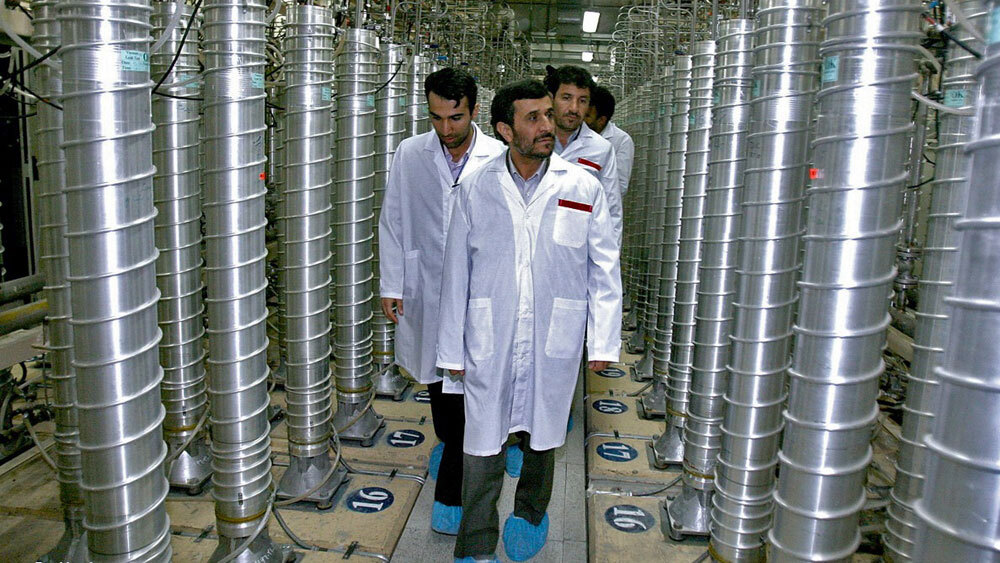 Iranian President Mahmoud Ahmadinejad visits the Natanz uranium-enrichment facilities, about 200 miles south of Tehran, in April 2008. Ahmadinejad announced on Iranian state television during the visit that Iran has begun the installation of some 6,000 new centrifuges, adding to the 3,000 centrifuges already at the facility.

Nothing is simple about Iran and its nuclear program. The subject is highly complex, involving questions of physics and chemistry, politics, diplomacy and the military.

Even on the fundamental question of how close Iran might be to acquiring a nuclear weapon, there is much debate.

Listening to recent comments from U.S. Secretary of State Hillary Clinton, you might assume there is no uncertainty: Iran wants a nuclear weapon.

"The world community is united in a rejection of Iran's pursuit of nuclear weapons. And we want to point out that it may not actually deliver the enhanced power that Iran believes it could," she said last month.

Iran's leaders deny they are seeking a nuclear weapon, but for years they pursued nuclear technology in secret, and even now they will not answer some key questions about their nuclear activities.

The U.N.'s International Atomic Energy Agency continues to issue reports tracking the growth of Iran's declared nuclear infrastructure. It is known that Iran has installed some 7,000 gas centrifuges at a facility at Natanz. These centrifuges are used to enrich uranium, and it is known that Iran has been able to enrich uranium to a low level that could be used to fuel nuclear power plants, but not be used in an explosive device.

It is not a huge technical leap from low-enriched uranium to bomb-grade material, says Muhammad Sahimi, a professor of chemical engineering and materials science at the University of Southern California and contributor to the news Web site Tehran Bureau.

Most experts agree that converting the material to weapons grade could be done in only a matter of months.

But the U.S. intelligence community says that is not the most likely path Iran would choose to make a bomb.

Earlier this year, Dennis Blair, the director of national intelligence, told the Senate Select Committee on Intelligence that it would take Iran until about 2013 to acquire enough highly enriched uranium for a bomb.

The intelligence community says Iran would not use its low-enriched uranium — which is under seal and constant monitoring — for the purpose of making a bomb.

If Iran diverted that uranium for military purposes, the world would know immediately, which would put Iran in jeopardy, says Thomas Fingar, former deputy director of national intelligence and chairman of the National Intelligence Council.

"They would be telegraphing their intentions and making themselves much more vulnerable during that period, and therefore, a separate, secret effort is more likely," Fingar says.

The U.S. intelligence community believes that if Iran's leaders decided they want a nuclear weapons capability, it would all be done in secret. They would build a secret centrifuge facility and use a separate supply of natural uranium to make low-enriched uranium and then further enrich it to bomb grade in secret. That could very well take four years or more.

Gary Milhollin disagrees. He is director of the Wisconsin Project on Nuclear Arms Control, which maintains the Web site Iran Watch.

"I think that's wrong, because it makes a lot of assumptions that I don't think can be defended. The first one is that they would not divert the low-enriched uranium that they already have. And second, that they would not be able to build a facility, even in secret, that could enrich enough uranium for a bomb in a year or two," he says.

"Iran could be as close as a few months or as long as a year or two away from making a bomb, depending on the assumptions you make," he says.

The U.S. intelligence community believes Iran's leaders have not made a final decision on whether to acquire a bomb.

Sahimi, of the University of Southern California, says he believes that is an accurate assumption.

"This is basically a political decision at the highest level of Iranian leadership. And I don't think they will make the decision so long as they think that every move that they make is being scrutinized," he says.

The scrutiny from the IAEA, the U.N. Security Council, the United States and Europe has been effective. Iranian leaders have been reluctant to attempt developing a bomb while they are under such scrutiny, says Fingar, the former intelligence official who is now a professor of international studies at Stanford University.

"Iran would be unlikely to reverse that judgment as long as scrutiny and pressure continue," he says.

As a result, pressure should continue, including engagement and diplomacy, but not the constant threat to use military force, Fingar says.

"I think the combination of carrots [and] sticks, a willingness to dialogue, to address in some way what Iran's security concerns are, undercuts a rationale for moving toward a weapon. Threats to use military action, I think, have a non-trivial possibility of reinforcing a judgment in Tehran that they need the ultimate deterrent," he says.

In other words, how the United States acts toward Iran can affect how long it may actually take Iran to acquire a nuclear weapon.