Accessibility links
Overview: Exploring Iran's Nuclear Ambitions Iran says its atoms are for peace, but much of the world worries that the Islamic republic is using its nuclear program to develop bombs. An NPR series this week explores the issue and its implications for the U.S. and the world. 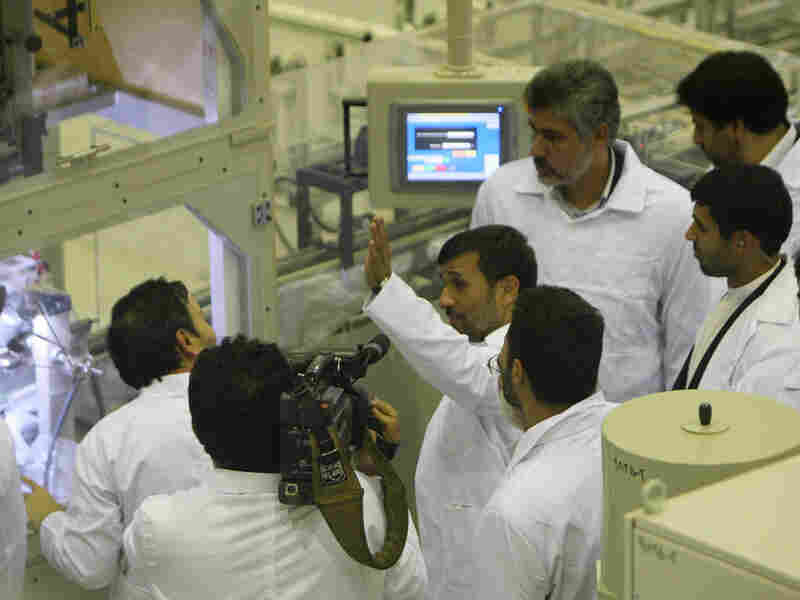 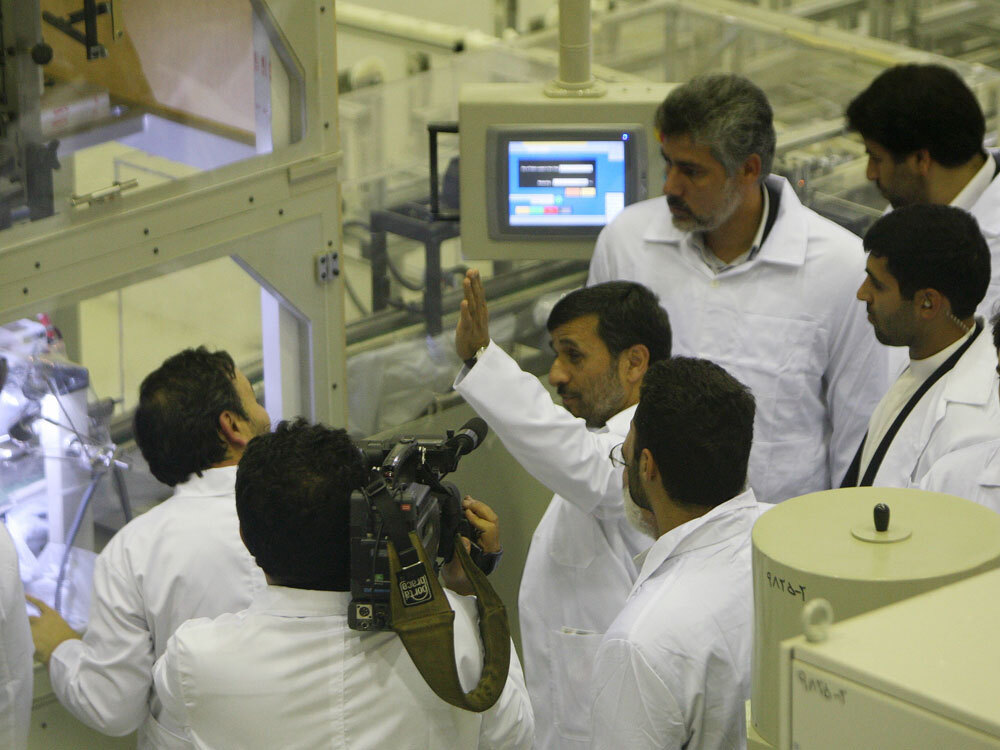 Iranian President Mahmoud Ahmadinejad waves to workers during a tour of a newly opened nuclear fuel enrichment plant in April. Iran says the plant is making fuel for nuclear reactors to produce electricity and other peaceful purposes.

The turmoil that erupted following Iran's disputed presidential election in June has put the Islamic republic squarely back into the headlines. But in some ways it has obscured a bigger, on-going concern for the U.S. and the international community: the question of whether Iran's theocratic regime is on its way to becoming a nuclear-armed state.

How will Iran's current political situation influence its nuclear ambitions? How close could Iran be to building a nuclear bomb? What steps — diplomatic, economic or military — are available to the U.S. and the U.N. to prevent Iran from going nuclear, or to deal with Iran if it does?

This week, an NPR series, "The Challenges Of A Nuclear Iran," looks at the suspected nuclear weapons program and what it means for the world.

When President Bush listed Iran, along with Iraq and North Korea, as part of an "axis of evil" in his 2002 State of the Union speech, he asserted that Tehran was aggressively pursuing weapons of mass destruction, including nuclear weapons.

At the time, Israeli officials insisted that Iran was less than three years away from developing a nuclear weapon.

Seven years later, Iran is moving forward in its efforts to enrich uranium, but it's not clear whether Tehran has made the decision to acquire a bomb. Here are some of the factors involved in that decision — and potential U.S. responses to them:

Is U.S. Military Action Against Iran's Nuclear Facilities An Option?

Although the Obama administration has said its priority is to engage Iran diplomatically, the president has not ruled out the possibility that the U.S. could use military strikes to destroy or disable Iran's nuclear facilities.

Some analysts have argued that the U.S. military is overstretched already with the wars in Iraq and Afghanistan, making it impossible to take military action against a new adversary.

In a recent commentary in The Wall Street Journal, though, retired Air Force General Chuck Wald argued that "an attack on Iranian nuclear facilities would mostly involve air assets, primarily Air Force and Navy, that are not strained by operations in Iraq and Afghanistan."

NPR's Mary Louise Kelly, who covers national security and defense, talks with Wald about how that might be done. She also speaks with experts who consider the broader consequences of going to war against a strong and well-armed state.

How Close Is Iran To Obtaining The Bomb?

The potential nuclear threat comes down to two elements: Can Iran obtain or process the highly enriched, weapons-grade uranium needed to build a bomb? And, if it succeeds, does it have the means to deliver that bomb to an enemy?

In April, the EastWest Institute issued a report by a group of American and Russian analysts who concluded that Iran already has the technical know-how to build a bomb. The experts said that if Iran's leaders decided to proceed, the country could have a crude weapon in a relatively short period of time.

Joseph Cirincione, president of the Ploughshares Fund, was part of the study. "This group of American and Russian scientists concluded that Iran could build a crude nuclear device in one to three years," he says. "But it would take them up to eight years to develop a warhead that could be put on top of a missile."

NPR's Mike Shuster, who covers Iran, talks with experts who think that timetable could be even shorter, and looks at what is known about Iran's nuclear capability.

If Iran Gets The Bomb, Would Deterrence Work?

During the Cold War, it was called MAD — mutually assured destruction — a doctrine that suggested that two opposing sides would never use their nuclear weapons because that would effectively result in the destruction of both the attacker and the counter-attacker. The equilibrium essentially worked for several decades with the U.S. and the Soviet Union.

Would a nuclear Iran bring a similar balance to the Middle East, where Israel is widely believed to possess nuclear weapons? Some argue that Iran's leaders espouse an apocalyptic religious vision that would make them immune to threats of retaliation. Others say the regime is far more pragmatic and self-protective.

Shuster explores why deterrence worked in the past, along with the potential risks and benefits of trying it with Islamic republic.

Allegations of fraud in Iran's presidential election galvanized opposition to the government, but what does that mean for U.S. policy toward the Islamic republic?

Mohsen Milani, professor of international affairs at the University of South Florida, says the turmoil in Iran complicates matters for the Obama administration. But it puts pressure on the government of Iran, too, he says.

President Mahmoud Ahmadinejad and his allies of hardliners are trying to use the current situation to buy time. "What they might try to do is prolong this process so they can consolidate power," Milani says.

NPR's Michele Kelemen, who covers the State Department, talks with some of the few Americans who have negotiated with Iran about whether the U.S. should look to Iran's opposition, whether more sanctions would work, and what needs to be discussed beyond the nuclear issue.

Should The U.S. Promise To Protect Iran's Neighbors?

Secretary of State Hillary Clinton suggested as much in comments last month, referring to the kind of guarantee that the U.S. has made to defend Japan, South Korea and its fellow NATO members in case of attack.

Clinton later clarified that statement, saying it was a warning to Iran that the U.S. would help build up the defenses of its partners in the region to match any advantage that Iran might gain by having a nuclear weapon.

"They won't be able to intimidate and dominate as they apparently believe they can once they have a nuclear weapon," Clinton said.

NPR's Shuster talks with experts about how far the U.S. should go to assure allies in the region, including Israel, that they would be protected from an Iranian nuclear threat.

Would Israel Launch A Preemptive Strike On Iran?

No country has been more adamant about preventing Iran from acquiring nuclear weapons than Israel. Ahmadinejad's anti-Israel rhetoric in recent years has been punctuated by threats to destroy the Jewish state.

Israelis took alarm when Secretary Clinton made her suggestion of extending a defense umbrella to Iran's neighbors, because that could be taken to indicate that the U.S. was already becoming reconciled to the idea of Iran acquiring the bomb.

"This is a mistake," said Dan Meridor, Israel's minister for intelligence and atomic energy. "We cannot act now by assuming that Iran will be able to arm itself with a nuclear weapon, but to prevent such a possibility."

NPR's Lourdes Garcia-Navarro reports from Jerusalem, where officials have been much more open about considering how military strikes might derail any Iranian nuclear weapons program.

Israel has done it before, sending warplanes against an Iraqi nuclear facility in 1981, and crippling the Osirak reactor, which Saddam Hussein had explicitly said was intended as a step toward obtaining a nuclear bomb.

The Arab Reaction To The U.S. And Iran?

Sunni Muslim governments, such as the one in Saudi Arabia, have long been wary of Iran's Shiite theocracy, but autocratic Arab regimes also have no interest in seeing Iran's government overturned by a successful popular revolt.

NPR's Peter Kenyon looks at some key questions as the Arab world faces the prospect of a nuclear-armed Iran, including how a bomb-equipped Iran would tip the balance of power in the region, and whether it would lead to further nuclear proliferation among other states in the region.