Accessibility links
Terminal Stories Of Life And Love From Heathrow The time we spend in airports is usually a moment of transfer between the more significant events of our lives. But from his desk in the middle of Heathrow's Terminal 5, writer Alain de Botton is taking note of the daily drama set among check-in desks and security scans. 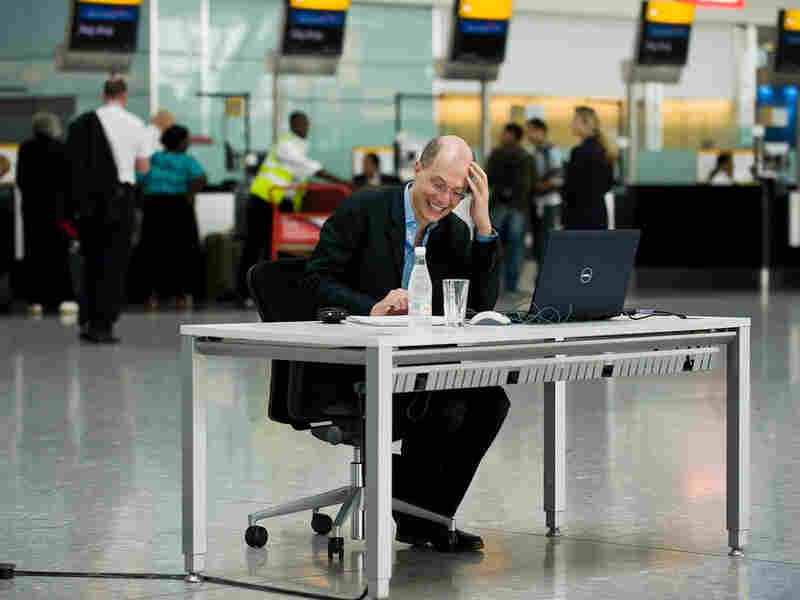 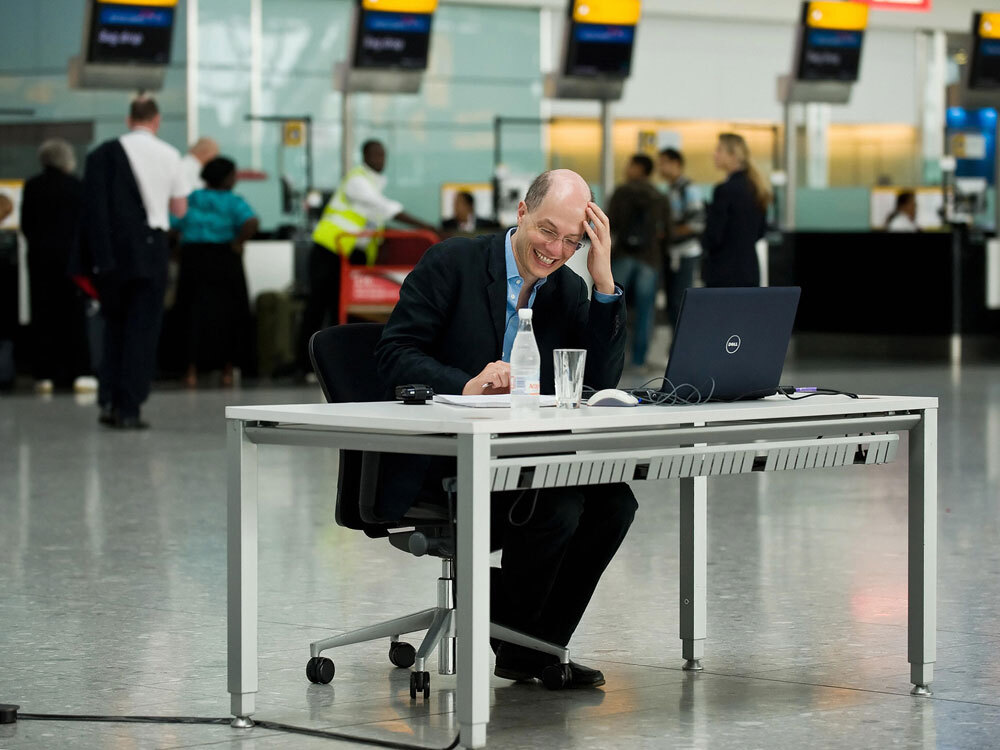 Writer Alain de Botton at his desk in Heathrow's Terminal 5.

The time we spend in airports is usually a moment of transfer between the more significant events of our lives. But from his desk in the middle of Heathrow's Terminal 5, writer Alain de Botton is taking note of the daily drama set among check-in desks and security scans.

De Botton tells All Things Considered host Guy Raz that airports are the cultural centers of the modern world. "They express all the things that make the modern world so strange and horrifying and beautiful and exciting. They're all about interconnection. They're about technology. They're about our loss of contact with nature; they're about consumerism and our dreams of travel. All of this comes to life at the airport."

Heathrow officials hired de Botton, an occasional NPR contributor, to spend a week at the airport and write about what he sees. The results will be published next month and handed out free to travelers.

His literary experiment is part of an effort by the airport to repair an image tarnished by Terminal 5's flubbed debut last year. The new terminal was supposed to be a technological marvel, but the state-of-the-art robotic baggage handlers broke down, snarling the system and stranding thousands of travelers.

De Botton says he's been given an all-access pass to the terminal and a guarantee of complete editorial control over the final product. "I think everybody's realized that this is absolutely not going to work if there's any form of censorship, because otherwise it just becomes a form of marketing," he says. "And I've told them that undoubtedly I'm going to say some things they don't like."

He's been making friends at the airport. His writing desk is just in front of the British Airways check-in counter, and he says he spends a lot of time chatting with one of the women working there. When passengers are rude to her, she likes to tease them with the promise of an upgrade — and then not deliver.

Then there's the Romanian cleaning woman who passes by every day. "She very much wants to be in my book," he says, "but she says that if I do put her in, she needs all her details changed, because otherwise it would disappoint many of her friends in Romania who think she's got a brilliant career in classical music."

One story de Botton sees played out quite frequently is that of parting lovers, like one pair who wandered around and around the terminal, unable to part. He writes:

There seemed no end to the ritual. The pair would come close to the security zone, then break down again and retreat for another walk around the terminal. At one point, they went down to arrivals and it seemed as if they might join the taxi rank, but they merely bought a packet of dried mango slices from M&S, which they fed to one other with pastoral innocence. Then, in the middle of an embrace by the Travelex desk, the beauty looked down at her watch and, with the self-control of Odysseus negotiating the sirens, ran away from her tormentor down the corridor behind a screen towards the security line and the gates.

Amid the parting lovers, wistful cleaning ladies and mischievous check-in clerks, de Botton says the most surprising thing that's happened to him so far was an encounter with the man in charge of Terminal 5's vast robotic baggage system. "He sat down at the desk next to me and said, 'I can't take it. I am fed up. I work in the bowels of this building, and I want to see a tree,' " de Botton says. "You know, he's at the center of the most technological system of probably the most modern airport in the world, and it's driving him nuts."