Accessibility links
National Review Online: Stop Illegals, Save CA California's financial unraveling has prompted much long-overdue debate, but the state's media and government continue to ignore one problem: the influx of poorly educated, unskilled, and illiterate Mexicans is damaging California, and such immigrants will likely soon dominate the state's overall population and politics. Unrestrained immigration and the welfare state do not mix. 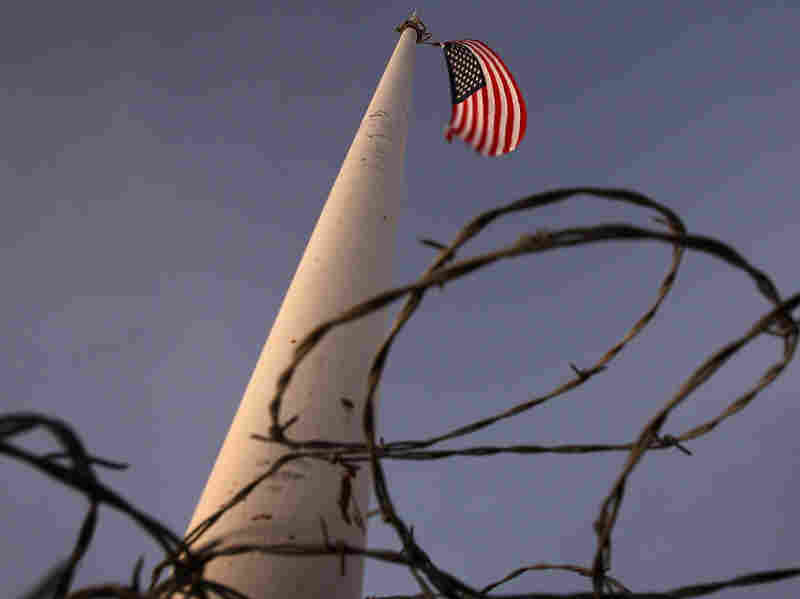 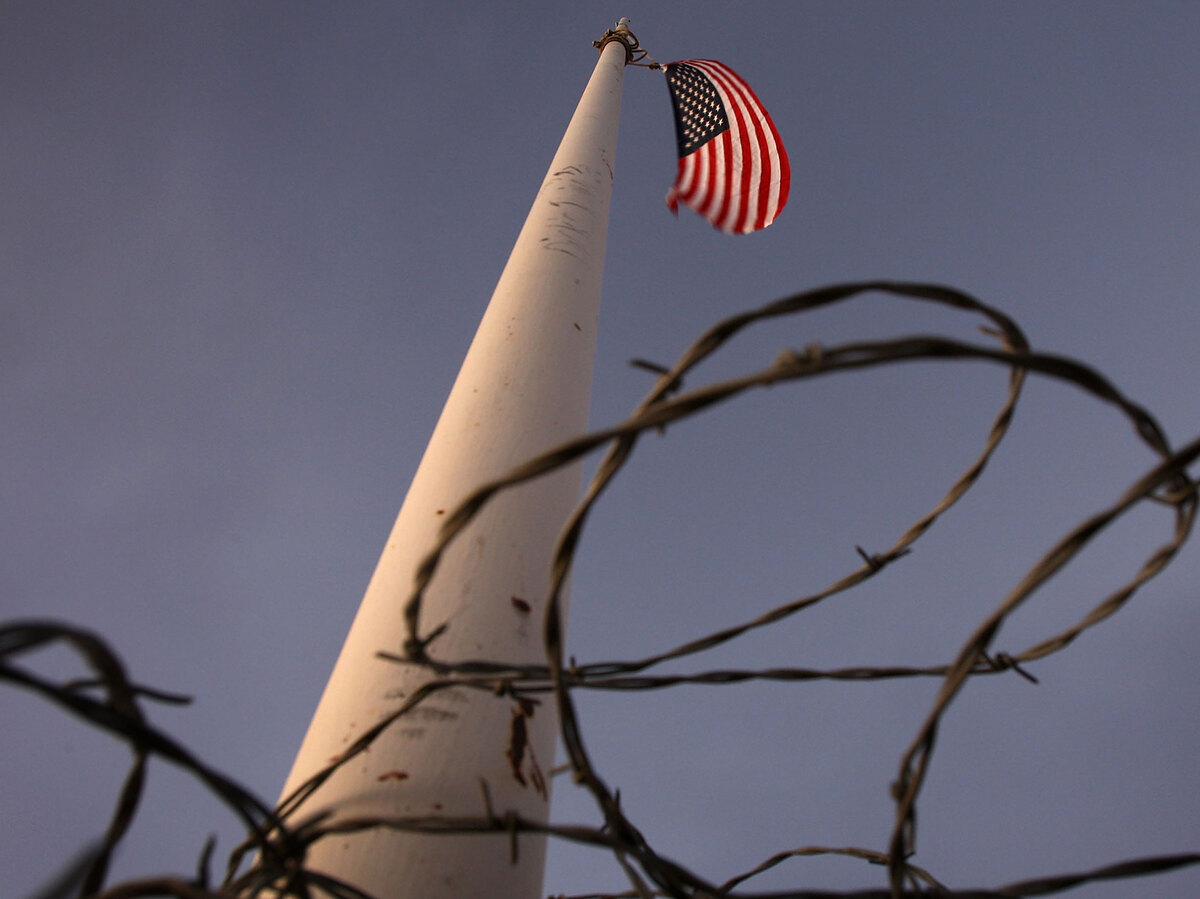 Flag pole near the US-Mexico border and the rural town of Campo, some 60 miles east of San Diego, California, July 30, 2009.

California's financial unraveling has prompted a long-overdue debate about taxes, regulation, and government spending, but the state's media and government continue to ignore what could be an even greater problem: the irreparable damage to California's human capital that nearly 30 years of unrestrained illegal immigration has achieved.

This is not an immigration problem, or even an illegal-immigration problem, per se. A strong case could be made that, in terms of educational achievement, industriousness, and entrepreneurial acumen, Asian immigrants to California have proven superior to white natives of the state. Therefore, if California were to experience a wave of mass immigration from Asia, its long-term economic prospects would be improved. Today's Hispanic immigrants would probably have the same effect if they came from the top 10 to 20 percent of their society according to those same measures of human capital rather than from its bottom rungs. But the influx has instead been composed mainly of the poorly educated, the unskilled, and the illiterate. Such immigrants will likely soon dominate the state's overall population and politics.

In 2005, the California K12 school system was 48.5 percent Hispanic, compared with 30.9 percent white. By now it is above 50 percent Hispanic. Two-thirds of kindergarten students were Hispanic, most of them unable to speak English.

For a closer glimpse of what's in store for California, look at the Los Angeles Unified School District, the largest in California and the second largest in the country. Of its roughly 700,000 students, almost three-quarters are Hispanic, 8.9 percent are white, and 11.2 percent are black. More than half of the Latino students (about 300,000) are "English learners" and, depending on whether you believe the district or independent scholars, anywhere between a third and a half drop out of high school, following significant attrition in middle school. A recent study by UC Santa Barbara's California Dropout Research Project estimates that high-school dropouts in 2007 alone will cost the state $24.2 billion in future economic losses.

Even those who graduate aren't necessarily headed to success. According to one study, 69 percent of Latino high-school graduates "do not meet college requirements or satisfy prerequisites for most jobs that pay a living wage." It is difficult to see how the majority-Hispanic labor force of the future can provide the skills that the sophisticated Los Angeles economy demands. Already studies show that as many as 700,000 Los Angeles Latinos and some 65 percent of the city's illegal immigrants work in L.A.'s huge underground economy.

The unhappy picture in Los Angeles is replicated to one degree or another across much of California and is taking a huge toll on the state's economic competitiveness and long-term prospects. California's educational system, once easily the best in the country, is today mired in mediocrity near the bottom among the 50 states as judged by National Assessment of Educational Progress (NAEP) tests in math, science, reading, and writing. And for the first time in its history, California is experiencing an increase in adult illiteracy. In 2003, it had the highest adult illiteracy in the United States, 23 percent nearly 50 percent higher than a decade earlier. In some counties (Imperial at 41 percent, Los Angeles at 33 percent) illiteracy approaches sub-Saharan levels.

Perhaps even more important than the collapse of educational achievement among the lower strata is a deterioration of the higher education that was for decades the basis of California's preeminence in science and technology. California currently ranks 40th among the 50 states in college-attendance rates, and it already faces a significant shortage of college graduates. Studies have shown that the economy will need 40 percent of its workers to be college-educated by 2020, compared with today's 32 percent. Given the aging white population (average age, 42), many of these new graduates will have to come from the burgeoning Latino immigrant population (average age, 26). By one estimate, this would require tripling of the number of college-educated immigrants, an impossibility if current trends hold. The state's inability to improve the educational attainment of its residents will result in a "substantial decline in per capita income" and "place California last among the 50 states" by 2020, according to a study by the National Center for Higher Education Management Systems.

The mediocre education system, along with the unfriendly business climate and confiscatory tax regime, is driving educated, middle-class Californians out of the state. Between 2000 and 2005, more people with college degrees left California than came in, according to research by the Hewlett Foundation. Since then this trend has accelerated, and the state lost 2.2 million members of its young, educated, tax-paying middle class between 2004 and 2007. IRS data show that of recent migrants from the Golden State to places like Texas and Oklahoma, who average 29 years of age, 58 percent have received at least some college education and 53 percent own their homes.

In short, we are witnessing a highly advanced and prosperous state, long endowed with superior human capital, turning into the exact opposite in just one generation. What can be done to stop this race to the bottom? The answer is simple: California and Washington need to enforce existing immigration law. Unfortunately, it is difficult to convince the public that this is necessary, so deeply entrenched are myths about illegal immigration.

One myth is that because America is a country of immigrants and has successfully absorbed waves of immigration in the past, it can absorb this wave. But the argument neglects two key differences between past waves and the current influx. First, the immigrant population is more than double today what it was following the most massive previous immigration wave (that of the late 19th century). Second, and much more important, as scholars from the Manhattan Institute have shown, earlier immigrants were much more likely to bring with them useful skills. Some Hispanic immigrants certainly do integrate, but most do not. Research has shown that even after 20 years in the country, most illegal aliens (the overwhelming majority of whom are Hispanic) and their children remain poor, unskilled, and culturally isolated they constitute a new permanent underclass.

Perhaps the most disingenuous myth about illegal immigrants is that they do not impose any cost on society. The reality is that even those who work and half do not, according to the Pew Hispanic Center cannot subsist on the wages they receive and depend on public assistance to a large degree. Research on Los Angeles immigrants by Harvard University scholar George J. Borjas shows that 40.1 percent of immigrant families with non-citizen heads of household receive welfare, compared with 12.7 percent of households with native-born heads. Illegal immigrants also increase public expenditures on health care, education, and prisons. In California today, illegal immigrants' cost to the taxpayer is estimated to be $13 billion half the state's budget deficit.

The state should stop providing welfare and other social services to illegal aliens as existing statutes demand and severely punish employers who break the law by hiring illegal immigrants. This would immediately remove powerful economic incentives for illegal immigration, and millions of illegal aliens would return to their countries. Instead, with President Obama in the White House and the Democrats controlling Congress, an amnesty for the country's 13 million illegal immigrants may be soon to come.

Milton Friedman once said that unrestrained immigration and the welfare state do not mix. Must we wait until California catches up with Mexico to realize how right he was?