Accessibility links
Parting With A Clunker: Such Sweet Sorrow As the Cash for Clunkers program screeches to a halt, an estimated 600,000 cars will have been traded in. Many of them — like the Ford commentator Julie Zickefoose once thought she would drive until it died — have rich, redolent family histories. 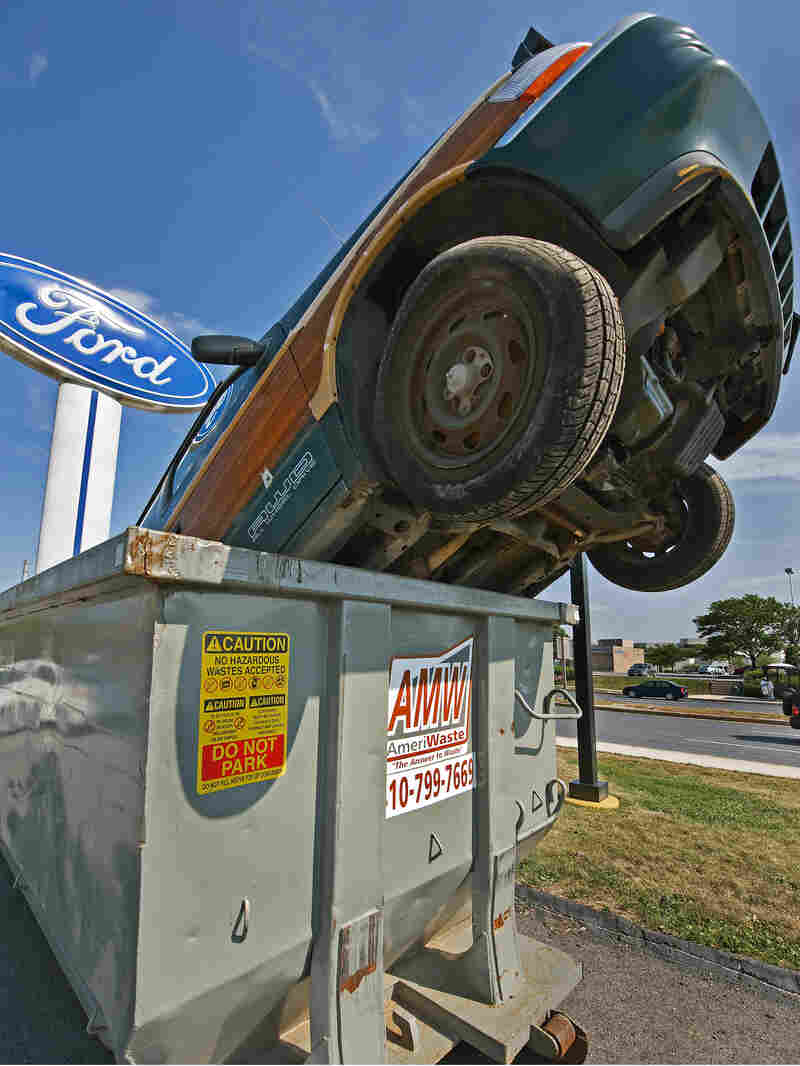 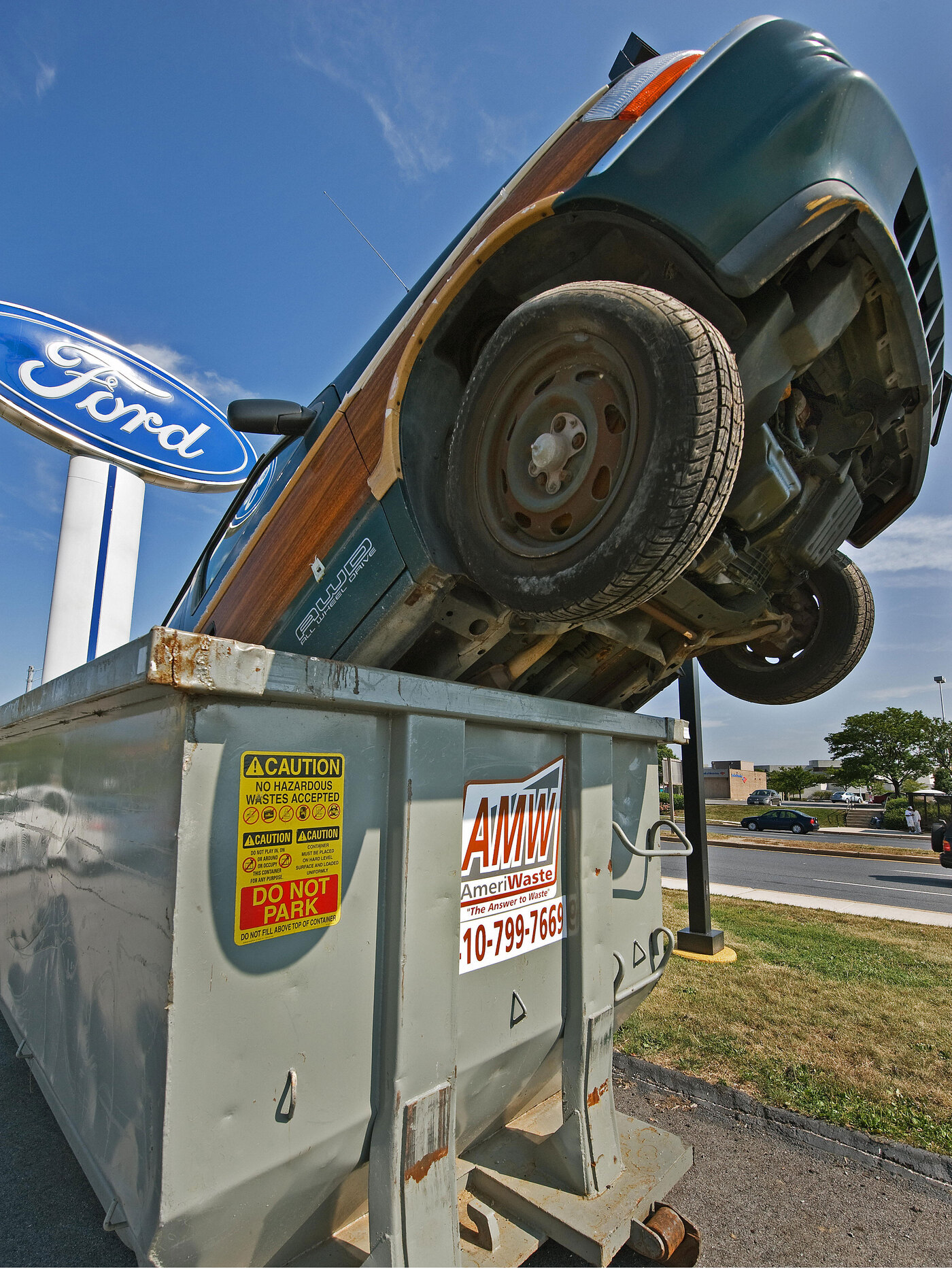 A 'Cash-for-Clunkers' vehicle sits in a dumpster outside Koons Ford in Baltimore, Maryland, August 10, 2009.

I was going to buy a used car. Just one not quite as used as mine, a 1995 Ford Explorer with 178,000 miles on it, dicey shocks and transmission and an insatiable appetite for fuel. Before the Cash for Clunkers program drove onto my radar screen, I had said it again and again: "I'm going to drive this thing until it falls apart under me." I was sure we'd pass the 200,000-mile mark together. After all, we'd been through a lot.

That Ford carried me to the hospital twice when I was in labor. We strapped our new babies into its back seat, fumbling with the buckles and straps. Both kids grew up in it, and the slow and steady rain of Cheerios gave over to Nerds, and bubble gum, and an orange DumDum embedded in the back carpet, stick pointing up. School papersand Matchbox racers and hair-bobs accumulated under the seats; stickers appeared on the windows where I wouldn't have put them myself.

There were bumper stickers from Maine to North Dakota. There was "Give Turtles a Brake!" There were dog stickers, and flower-power daisies, and "Life is Good" stickers, and during the 2008 election there were some pointed ones that got me more than a few hairy eyeballs from other drivers, maybe even a ticket or two.

Mice lived in it off and on, including one mama mouse who had the bad judgment to make a big, fluffy nest and have her babies in the false fabric ceiling, which was a tenable plan until I drove the car and parked it in the sun. It took a month for me to find the nest. You can imagine. The half-gallon of milk that tipped over and leaked one summer day didn't help. Neither did the chicken that rolled out of a grocery bag and festered quietly in the cargo area for a week until a small flock of vultures circling low told me there was something of interest in my garage. I didn't drive it very often, just when I needed to. 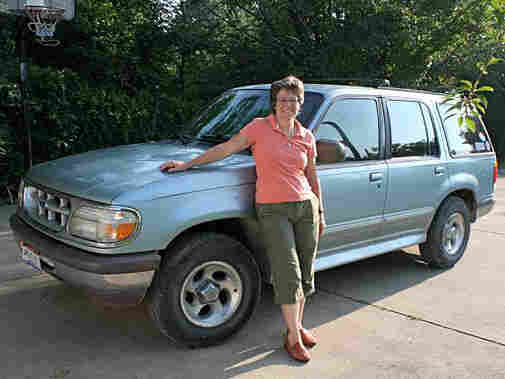 Julie Zickefoose with her Clunker, a 1995 Ford Explorer. Her most recent book, Letters from Eden, is a collection of essays and paintings. Courtesy of Julie Zickefoose hide caption

It broke down on me only once, and that was just a dead fuel pump, in a parking lot only three blocks from my husband's office. That car took care of me. And so, between the memories, and the stickers, and the mingled smells, and the familiar, dependable roar of its engine, it became part of our family. I would drive it until it fell apart.

Until Cash for Clunkers. Until it hit me that nobody was going to walk up and offer me $4,500 for the MouseMobile, ever. And I began to see the wisdom of starting over with a new car. No, the heady, intoxicating appeal of it. I struck the Cash for Clunkers lure like a hungry bass.

But the thought of having a dealer fill my car's good heart with goo and rev the engine to death; of crushing its still strong — if rusty — body. It broke my heart. It seemed so unnecessary. Couldn't they give it to someone who needed a car? Couldn't we not kill it, and say we did? I felt like a heel, a faithless, thankless creep and twice I had to pull over and bawl for awhile at the thought of condemning a perfectly good car to such a violent death.

When I finally closed the deal on my new car, I asked the dealer to leave the Ford on the lot for awhile, not to lead it into the back pasture until after I was out of sight. I sat quietly in it for one last time, breathing its many aromas. I looked at its stickered rump in my fancy, new, auto-dimming rear view mirror with compass, stepped on the gas and headed home.