Accessibility links
A Little Safety Goes a Long Way with DIY Every year, thousands of do-it-yourselfers land in the emergency room from power-tool injuries. A look at which tools cause the most accidents, and tips on how to finish construction projects without ever seeing a hospital.

Listen
A Little Safety Goes a Long Way with DIY 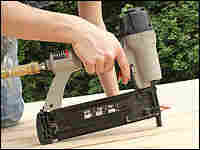 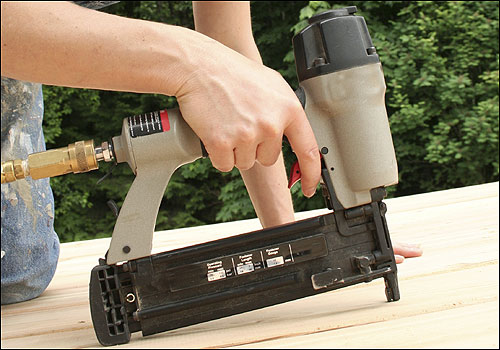 Consumer nail-gun injuries have increased 300 percent since 1991. Home-improvement professionals recommend getting familiar with tool safety before starting any project.

Emergency rooms reported more than 330,000 visits in one year due to injuries from working with home improvement tools, according to a 2002 Home Safety Council report. The following safety recommendations from the council and the U.S. Occupational and Safety Health Administration (OSHA) could help DIYers stay out of danger.

— When working with chemical products, check warnings and content labels to identify hazards..

—When climbing a ladder, always face it and wear slip-resistant shoes, such as those with rubber soles. Also, try to stand on the fourth rung from the top and/or bottom.

— Use gasoline as a motor fuel only. Gasoline should never be used indoors, because its flammable vapors can be ignited by even a tiny spark. Store gasoline in an outdoor shed or garage, out of children's reach, in a vented container approved for gasoline storage.

— Disconnect tools when not in use, before servicing and when changing accessories such as blades, bits, etc.

— Keep a stocked first aid kit and emergency numbers around your workspace, including the national Poison Control Hotline (1-800-222-1222).

There was a time when nail guns were used only by skilled tradesmen, mainly because of the danger involved with handling such tools.

Contractor Adam Dreyfuss of Frederick, Md., has seen his fair share of accidents, including one he witnessed last summer.

"The nail gun double-fired and he shot a nail through two fingers," Dreyfuss says. "No, it wasn't too pretty, especially pulling the nail out. I just couldn't believe he did it."

Consumer nail-gun injuries — at least those serious enough to require a hospital visit — have increased 300 percent since 1991.

That means that each year, some 14,000 do-it-yourselfers using nail guns to install siding or hardwood floors are getting hurt.

These days, people are also buying and renting circular saws to build anything from shelving and bookcases to treehouses.

"So once you get your tool loaded, you want to make sure you know what you're doing," says Jay Sommers, who oversees rentals at Frager's Hardware Store in Washington, D.C.

Sommers says some customers who come into the store have never touched a power tool. Before he demonstrates how to use equipment, he tries to ask a few questions about the customer's experience with tools.

"Have you used one before? Do you know anything about it? What are you trying to do?" Sommers explains. "Sometimes, these folks will have a conversation (with someone) in the office at lunch or down at Starbucks, saying 'This is the tool you need.' Well, they don't have any idea."

Meri-K Appy, head of the Home Safety Council, says that if the prevalence of nail gun accidents is surprising, the number of people who end up in the emergency room after falling off ladders is even more troubling.

Misha Goodhue has never been on a ladder. She and her mother-in-law, Eve Goodhue, just bought one to paint Goodhue's house in a Capitol Hill neighborhood in Washington, D.C.

Goodhue pauses when she learns that 136,000 people every year end up with fractures, sprains and breaks from ladder falls.

"That's not exactly the statistic I wanted before we get up on a ladder," Goodhue says.

Appy says that if people are aware of risk, they're more likely to take precautions.

"You want to stay at the safe standing level, which is the fourth rung from top or below, or for a step-ladder, the second rung from the top," Appy says.

Most people who have used ladders feel comfortable on them, but studies show that injuries from the lowest rungs can be just as bad as those from higher ones.

Eve Goodhue, 63, has been climbing ladders and painting for years.

"I've been very conscious; I don't want to fall," she says.

Goodhue says that this time she'll take it slow and try to recruit her son for help. He's just not as excited about painting every room in the house.

Ladder falls are also associated with men and boys. This pattern holds steady across most kinds of home injuries, including one of the most common: injuries from lawn mowers.

Dr. David Bishai, an associate professor at the Johns Hopkins University School of Public Health, became interested in lawn-mower accidents after treating a 7-year-old girl whose foot was sliced off by a mower.

But Bishai says the vast majority of the 80,000 lawn-mower accidents per year happen when the mower shoots sticks or rocks into the air.

"I need to be worried about pots in the ground, or branches that could come hit me in the face," Bishai says about mowing his one-acre yard.

And like all injuries, lawnmower accidents happen in a split second. Bishai suggests keeping children and other people out of the yard, wearing eye protection and clearing the yard of sticks before mowing.

I think the frustrating thing is that so many of these are preventable," Appy says. "There are injuries and deaths happening that could have easily been prevented."

Appy says one should take the time to get trained when using a tool or a piece of equipment. Many times, using something as simple as a nail gun can be difficult to properly manage.

Sommer says that just because a tool looks easy to use, doesn't mean it's easy to use safely.