Accessibility links
Khaled: Out Of Exile, Finding 'Liberte' Khaled is Algeria's best-known singer, as well as a pioneer of the music known as rai, which means "opinion." His opinions got him exiled from his native country for the past 20 years, but he recently returned as a hero. Khaled's new CD, Liberte, is a return to his roots.

Khaled is Algeria's best-known singer, as well as a pioneer of the music known as rai, which means "opinion." Khaled's upbeat opinions of partying, pleasure and romance rankled religious conservatives in 1980s Algeria. That's why he spent most of the past 20 years in exile in Europe. In his first new recording in five years, Khaled looks back on his history as a merry rabble-rouser on Liberte.

Raikoum [Your Law, Your Opinion] 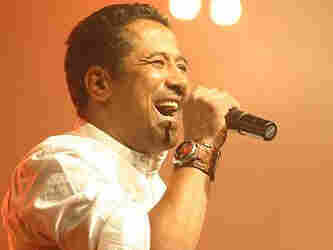 Khaled spent most of the past 20 years in exile in Europe, but he recently received a hero's welcome in his native Algeria. courtesy of the artist hide caption

Before everything, there is Khaled's voice: reedy, robust, elemental, at once agonized and ecstatic — in short, one of the iconic sounds of world music.

Since moving to France in the '80s, Khaled has traveled many roads. He's collaborated with reggae legends in Jamaica and with Grammy-winning producer Don Was in L.A. He's made songs with a Bollywood star, with rock legend Carlos Santana and — controversially for some — with Algerian Jewish artists. After all this adventuring, Khaled returns to form with a rocking rai session, essentially a live concert in the studio.

Liberte was produced by Martin Meissonnier, who first encountered Khaled as a popular wedding singer in Algeria, and who produced his international debut in 1987. Now, the two reunite on an album free of guest artists and crossover gimmicks, a session that showcases Khaled's versatile band and essential rhythms. Amid all the anxious rai beats, two songs ("Ya Mimoun," most notably) channel Gnawa trance music from Morocco, one of Khaled's earliest musical loves.

Most of these tracks were recorded in single takes — rare in this age of fussy production. But if the no-nonsense method is a throwback, the band's sound — rich with flavors of jazz, funk, reggae and Arabic classical — reflects Khaled's remarkable journey through life and music. The song "Liberte," or "Freedom," was written back when Khaled was a young man yearning to escape what he saw as an oppressive society. This remake is an exuberant celebration of the freedom he's enjoyed ever since.

These days, Khaled once again performs in Algeria, where he's received as a returning hero and an ambassador to the world. Liberte is the best work of his career, and the most accessible Arabic music CD to reach the U.S. market in years.