Accessibility links
NFL: Dodging The Concussion Discussion? Nobody's sure how dangerous the contact in football is to the brain. But high school players will experience more than 40,000 concussions this season and many former players suffer from dementia or depression. So why is pro football taking a Big Tobacco approach to research? 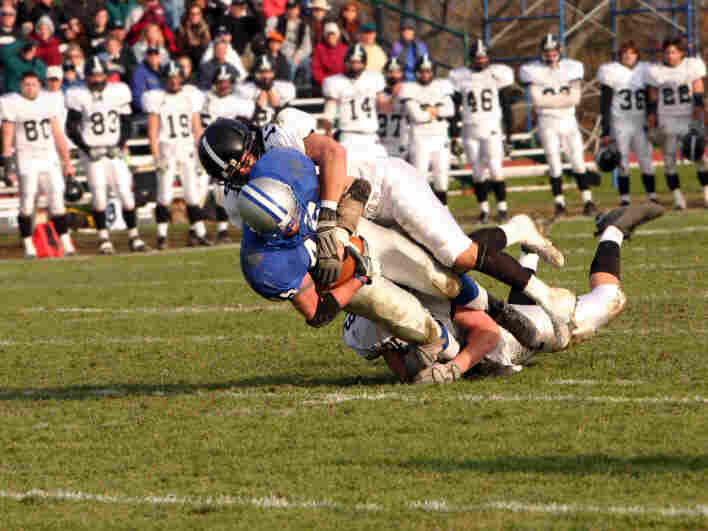 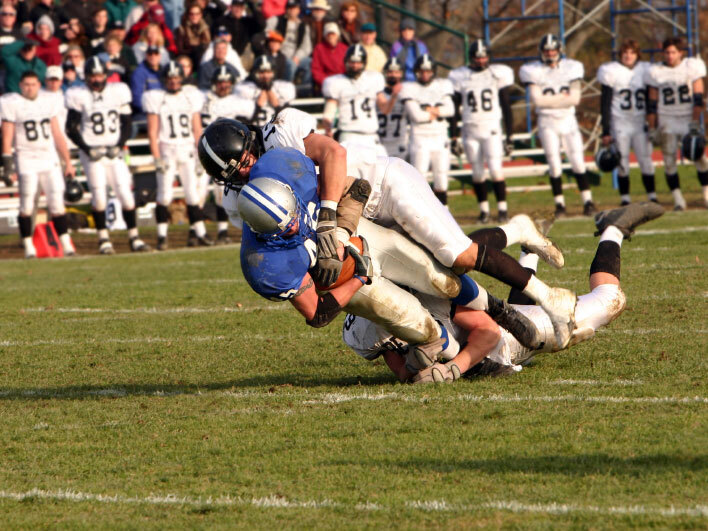 Unlike baseball, basketball and ice hockey, football is strictly an all-American game. Oh, there are a few Samoans in the NFL, the odd Canadian, but unlike most popular American cultural components, football has never succeeded as an export. Either it's just our thing, like bullfighting in Spain, or other people are too smart to risk playing it.

Luckily for the NFL, there's no dearth of homegrown candidates. As students head back to high school, some 1.2 million will suit up in helmets and shoulder pads.

But an old NFL star who suffered a few concussions asks me: "How many mothers would let their boys play football if we knew what concussions could mean when these boys get older?"

The fact is, we don't know for sure how dangerous our American game is to the brains of the people who play it. We do know that high school players will experience more than 40,000 concussions this season, and that boys experience greater acceleration to the head than do older players. We know that in a full season of games and practice, players endure more than 3,000 hits, and frequently these collisions are at 100 g of force, the equivalent of a car crash.

Because so many former players have been found to suffer from dementia or depression, the NFL can no longer ignore the issue, but still, the league sounds more like the tobacco companies of a few decades ago. It dismissed a study by the University of North Carolina that used essentially the same methodology as smoking-and-cancer studies. In the study, 20 percent of retired players who had had three or more concussions said they suffered from depression.

Basically, the NFL wants to be its own research institute, even though, bit by bit, the evidence grows that football simply is not good for the brain.

"Anyone who doesn't recognize the severity of the problem is in tremendous denial," says Dr. Ann McKee of Boston University's School of Medicine. McKee conducted a study on players suffering from repetitive head trauma.

The NYU Medical School has proposed a definitive study on early-onset dementia. It wants to sample the brainwaves of 100 NFL rookies and 100 retired players. It asked Robert Batterman, the league's labor counsel, for help obtaining the rookie subjects needed. Batterman replied with a curt e-mail, saying only that NYU was talking to the wrong former players.

The old player I talked to says his wife stiffens every time he forgets something or can't remember a word. And, he says: "Frank, I never stop thinking that my mind's the next one to go."

Frank Deford misspoke when he said New York University is "authorized to do a definitive study" on early-onset dementia. NYU proposed the study to the National Football League, but it has not been officially approved. The Web text has been corrected.