Accessibility links
What The 'Gang Of Six' Wants From Health Care Bill A small group of key senators was once looked at as the key to passing a bipartisan health care bill in the Senate. But so far, they have no compromise after months of negotiations — and plenty of Senate Democrats peeved at the influence ceded to the gang's GOP members.

Listen
What The 'Gang Of Six' Wants From Health Care Bill

What The 'Gang Of Six' Wants From Health Care Bill

A small group of key senators known as the Gang of Six was once looked at as the key to passing a bipartisan health care bill in the Senate.

But the group of Senate Finance Committee members has, instead, proved a time-sucking bust, with no compromise after months of negotiations and plenty of Senate Democrats peeved at the influence ceded to the gang's GOP members.

Committee Chairman Sen. Max Baucus, a Montana Democrat, who headed the group, said Wednesday that his committee will start voting on a bill in two weeks — whether or not the gang's three Republican members are with him or against him.

"The time has come for action, and we will act," Baucus says, regardless of whether Republican Sens. Chuck Grassley of Iowa, Mike Enzi of Wyoming or Olympia Snowe of Maine are on board with a compromise plan.

Baucus this week released what he called a "framework" for health reform that does not include a public insurance option, and he will propose legislation next week.

Though some in the group of senators have a history of collaborating with their colleagues across the aisle to craft legislation, only Snowe in recent weeks appeared to remain in serious compromise discussions with Democrats and the White House.-- Liz Halloran

Here's a look at the concerns that each member of the Gang of Six brought to the negotiating table. 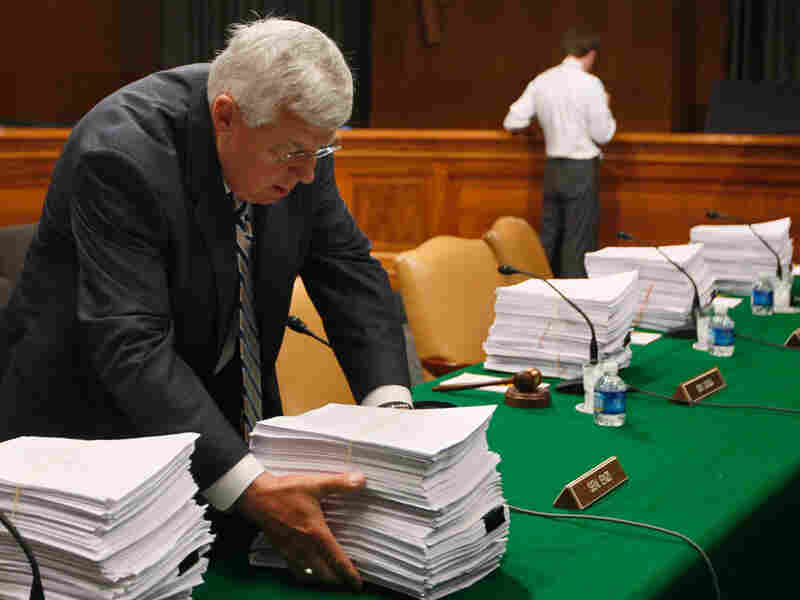 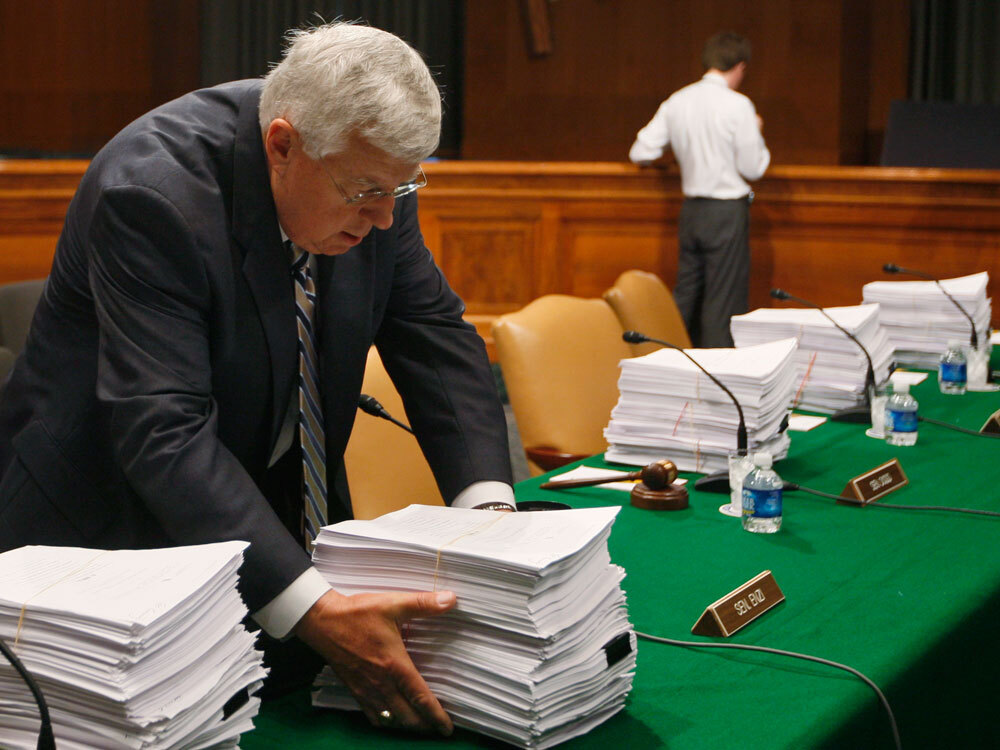 Sen. Mike Enzi (R-WY) moves towering copies of the Senate health care bill and its amendments before a markup hearing on Capitol Hill in June.

Enzi is one of the top-rated senators with the American Conservative Union. But as a member of the Senate Committee on Health, Education, Labor and Pensions, he is also known for working on bipartisan bills with its late chairman, Massachusetts Sen. Edward Kennedy. While Enzi has rejected the health care overhaul bill produced by that committee, he is using his position on the Senate Finance Committee and in the Gang of Six to have more influence on the legislation.

Enzi has said that he opposes paying for universal coverage through tax increases or by squeezing savings from Medicare. He wants a bill that will get the support of at least 75 senators. He has rejected the Sept. 15 deadline set by Senate Finance Committee Chairman Max Baucus to have a deal.

But Enzi has also long been known to care deeply about health care issues. In the past, he pitched his own reform bill, titled "10 Steps to Transform Health Care in America," which encouraged revamping the current system in small steps.

Liberals complain that Enzi's demands will only water down the health care overhaul bill, but his conservative bona fides increase the potential for Republican support. — Audie Cornish 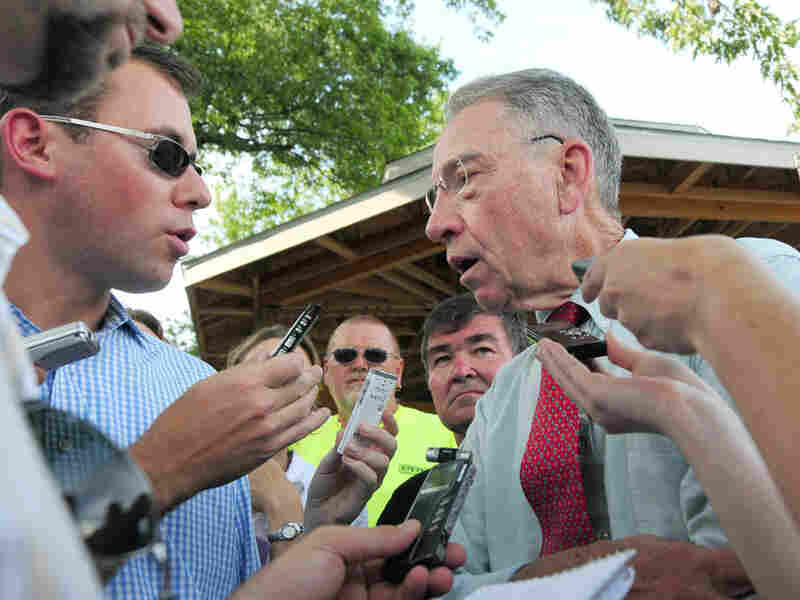 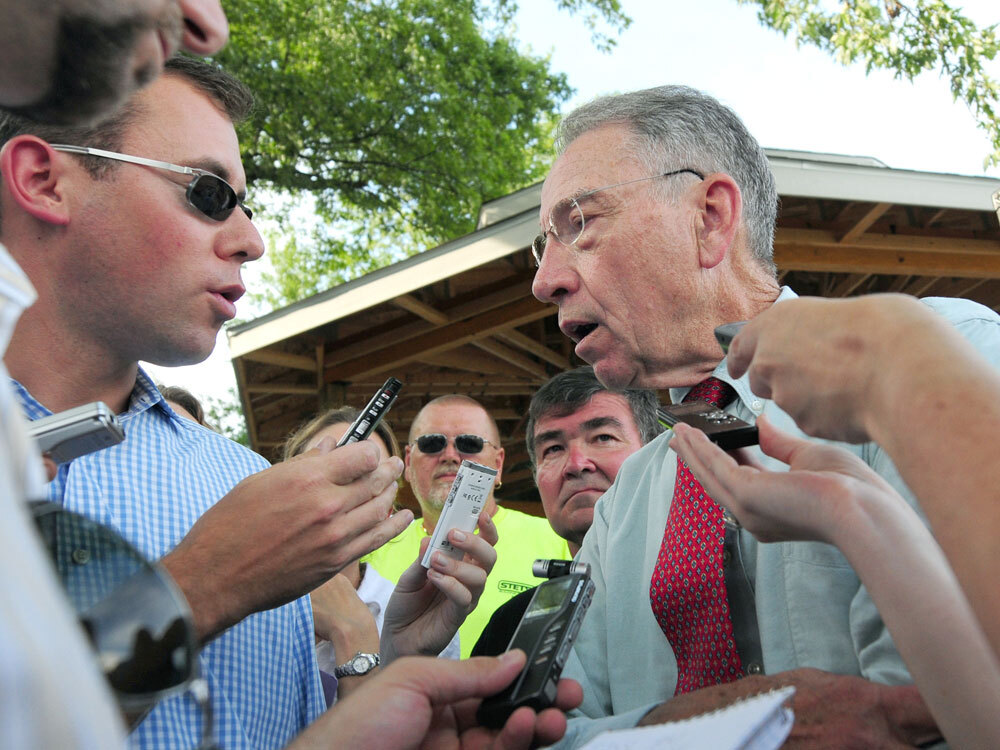 Grassley is the lead Republican negotiator on the Senate Finance Committee and in the Gang of Six, and is good friends with committee Chairman Baucus; Grassley has boasted in the past of their bipartisan work.

However, of the six senators on this list, Grassley has had the toughest time dealing with constituents and rowdy town halls during the congressional recess.

As a result, Grassley says he won't vote for the bill the group is working on if it can't get more than three or four Senate Republicans on board. He says he represents their concerns at the negotiating table.

"No public option. No play-or-pay. No things that are going to lead to any rationing of health care. No interference with the doctor-patient relationship," says Grassley. "About the only place we haven't made progress along the lines of what Republicans are wanting on the bill is in tort reform."

Grassley told his hometown newspaper that Baucus would have a difficult time winning GOP support for his plan. — Audie Cornish 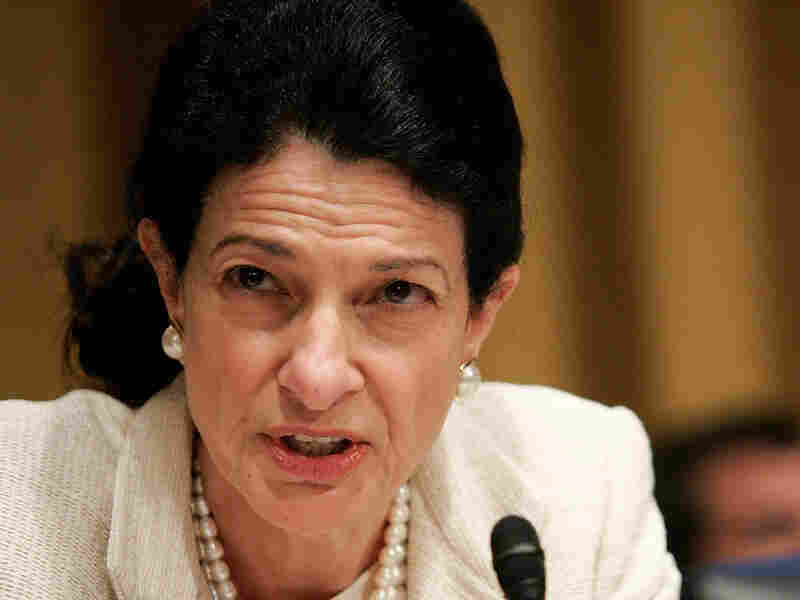 Sen. Olympia Snowe (R-ME) is the only senator in the Gang of Six from a state that has attempted universal health care. Alex Wong/Getty Images hide caption 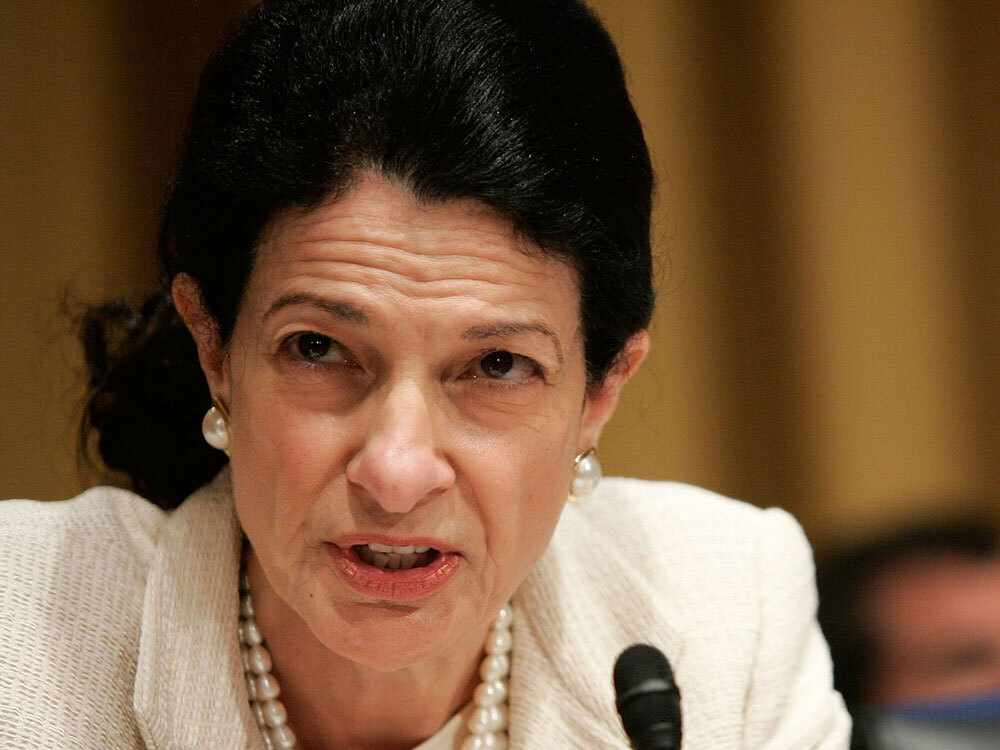 Sen. Olympia Snowe (R-ME) is the only senator in the Gang of Six from a state that has attempted universal health care.

Snowe is a moderate who has sided with Democrats on key votes, such as the economic stimulus package earlier this year. She has been courted assiduously on health care by Senate Democrats, and the White House.

This past spring, she compared the life of a moderate in the GOP to that of a cast member of the reality television show Survivor.

"You are presented with multiple challenges, and you often get the distinct feeling that you're no longer welcome in the tribe," she wrote in an April op-ed in The New York Times.

Snowe is the only senator in the Gang of Six from a state that has attempted universal health care. Maine's program was signed into law in 2003 and has had limited success, falling well short of its original goal of insuring nearly 130,000 residents by 2009. Snowe says the program has failed to grow large enough to wield the clout it needs to keep costs and premiums low.

Now, as she sits at the negotiating table for a national health care overhaul, Snowe tells NPR that controlling costs is her primary focus: "What we have to do is develop a plan that's going to be available to people on an affordable basis ... containing costs, both for the American consumer and the American taxpayer." She has said flatly that there is no GOP support for a public insurance option, and has urged the White House and Democrats to consider a public option that would be triggered only if insurance coverage failed to meet a basic threshold. 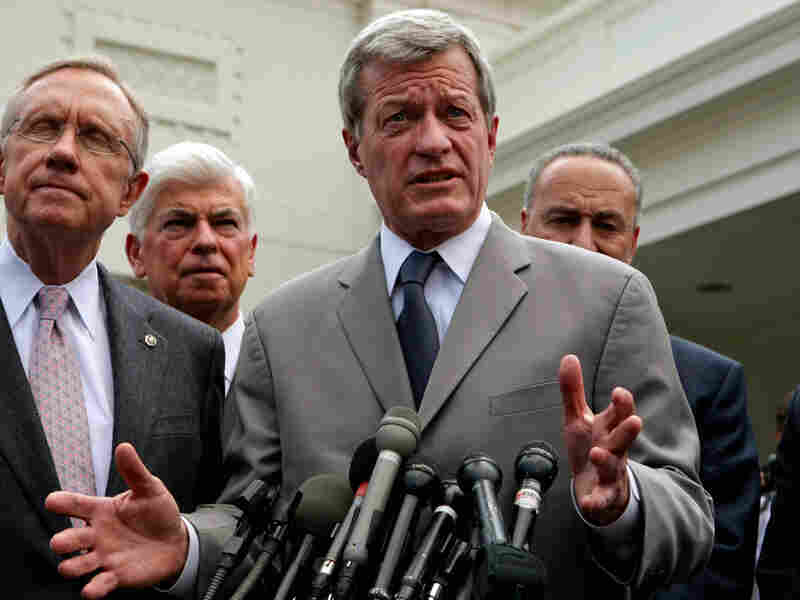 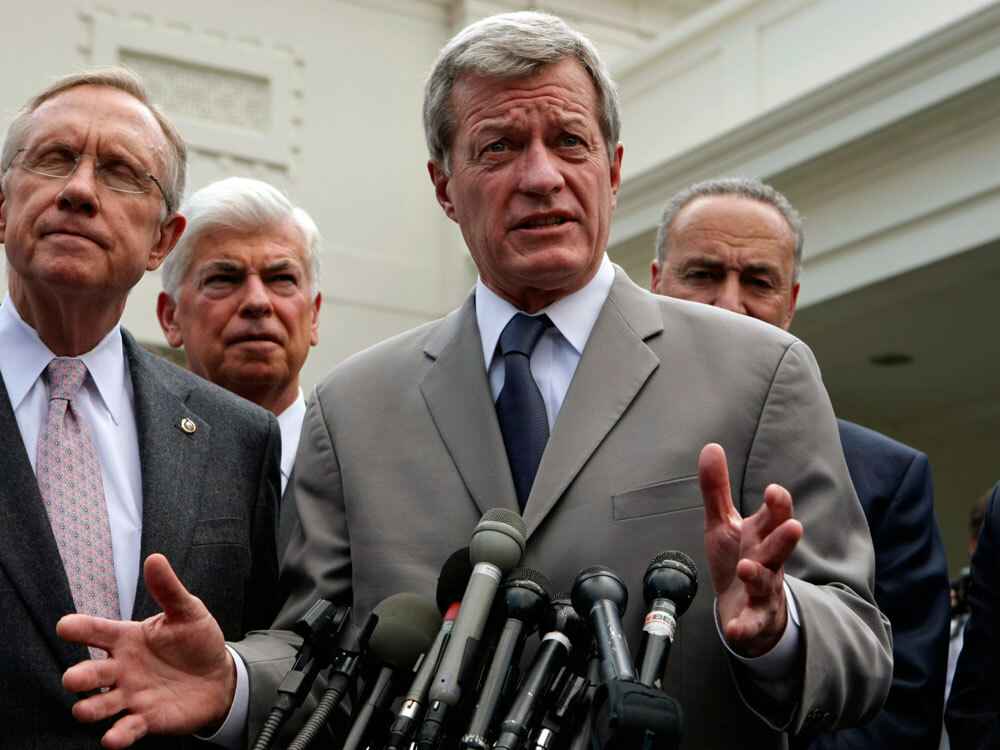 Nobody is more central to the success or failure of a health care overhaul than Baucus. Elected last fall to his sixth term, he chairs the Senate Finance Committee, where he leads the Gang of Six in crafting the definitive Senate health care bill.

He unsuccessfully pushed the gang this week to come up with a compromise plan in advance of President Obama's Wednesday's address to Congress, and has announced that his committee will move forward with a bill whether or not Republicans support terms on the table.

A moderate, Baucus carefully guards his bargaining power. He's vague about what he wants in a bill — he is inclined not to favor new taxes, and he would like to see a public option. But his ultimate goal, as he said on July 30, is "meaningful, bipartisan legislation that can pass the Senate and become law this year."

Such pragmatism can make more liberal Democrats nervous, and he has drawn the ire of fellow Democrats including fellow committee member Sen. Jay Rockefeller of West Virginia. Baucus has a history of cooperating with the Senate Finance Committee's ranking minority member, Grassley, who is seen as the tougher negotiator.

Baucus' Washington connections have also come under scrutiny. An NPR Dollar Politics story examined his ties to industry lobbyists and noted that in his last campaign, 47 percent of his funds came from political action committees, compared to 5 percent from Montanans. — Peter Overby 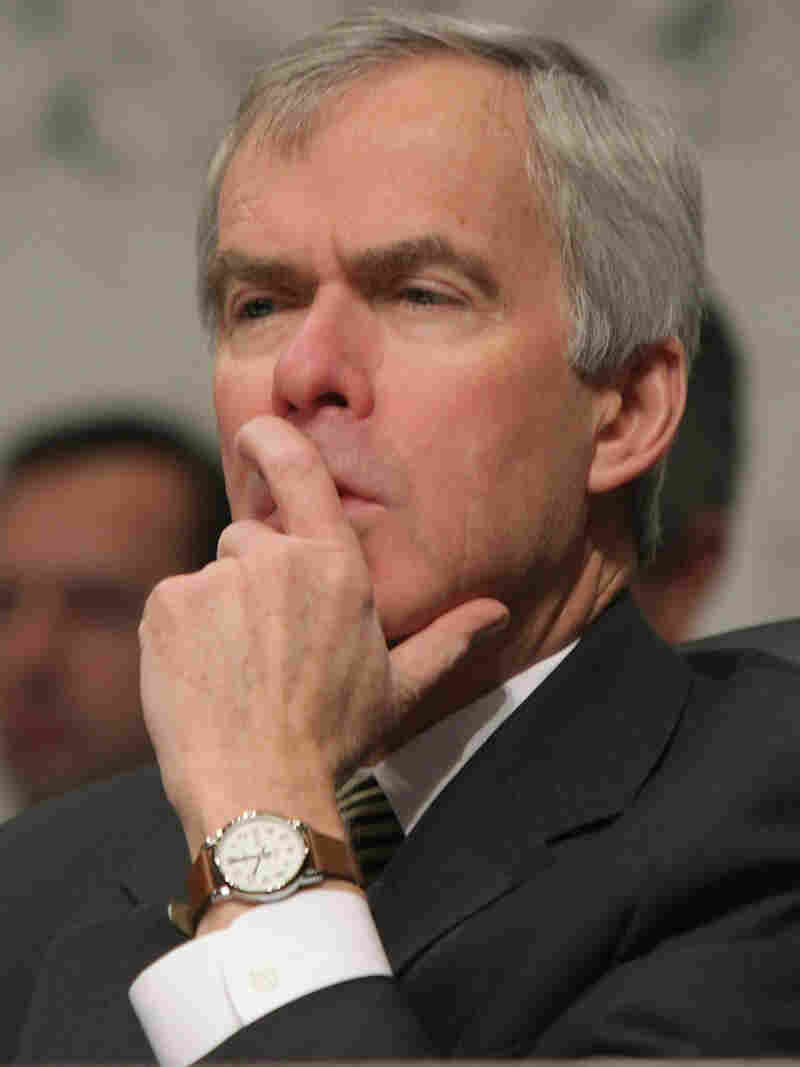 Sen. Jeff Bingaman (D-NM) is the most liberal of the Gang of Six and a firm supporter of the public option. Mark Wilson/Getty Images hide caption 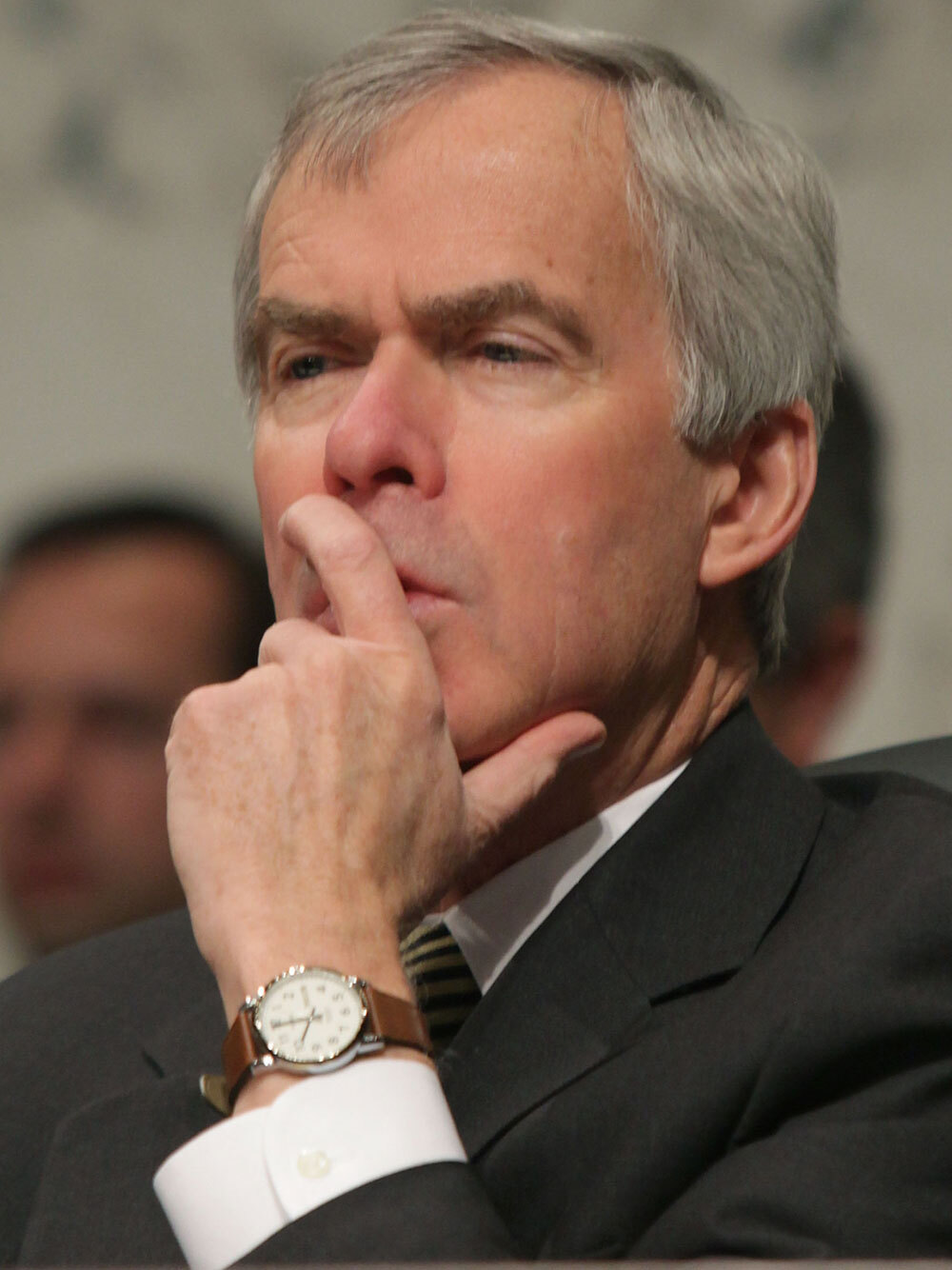 Sen. Jeff Bingaman (D-NM) is the most liberal of the Gang of Six and a firm supporter of the public option.

Bingaman is easily the most liberal of the Gang of Six. A soft-spoken Westerner, he has made his mark in health care in the areas of Medicaid and health care for Native Americans.

Now serving his fifth term in the Senate, Bingaman, like Enzi, sits on both the Finance and Health, Education, Labor and Pensions committees.

Bingaman supports the concept of a public option to compete with private health insurance plans. But, as one might expect from a longtime senator, he has also said that he is open to compromise.

"Obviously, we wouldn't be spending all these hours in all these meetings if we didn't think there was a good chance of getting an agreement," he told New Mexico Public Television earlier this month.

But he said he was prepared for the possibility of Democrats having to move a bill without Republican support if the negotiations ultimately fail to produce a deal. "It's possible we would be forced to do that," he said. — Julie Rovner 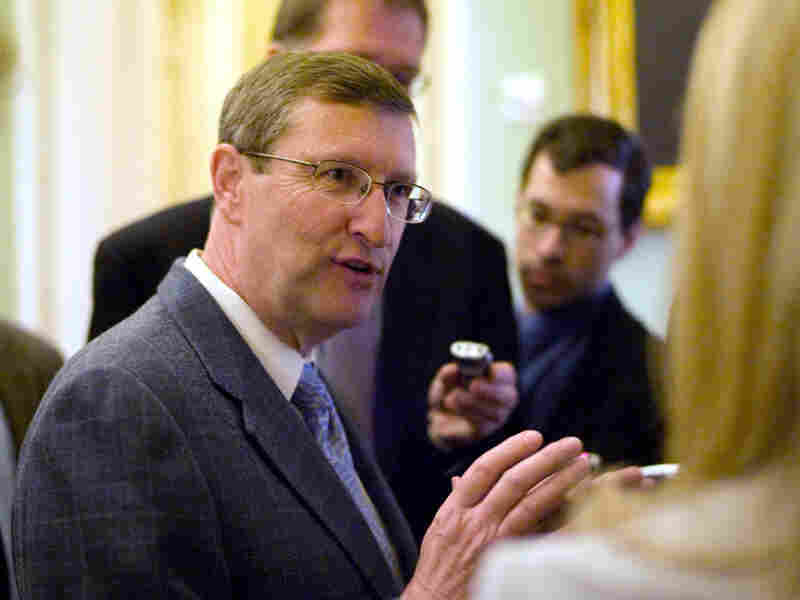 Sen. Kent Conrad (D-ND) has kept a close eye on the cost of the health care proposals and was one of the first Democrats to come out against the public option. Harry Hamburg/AP hide caption 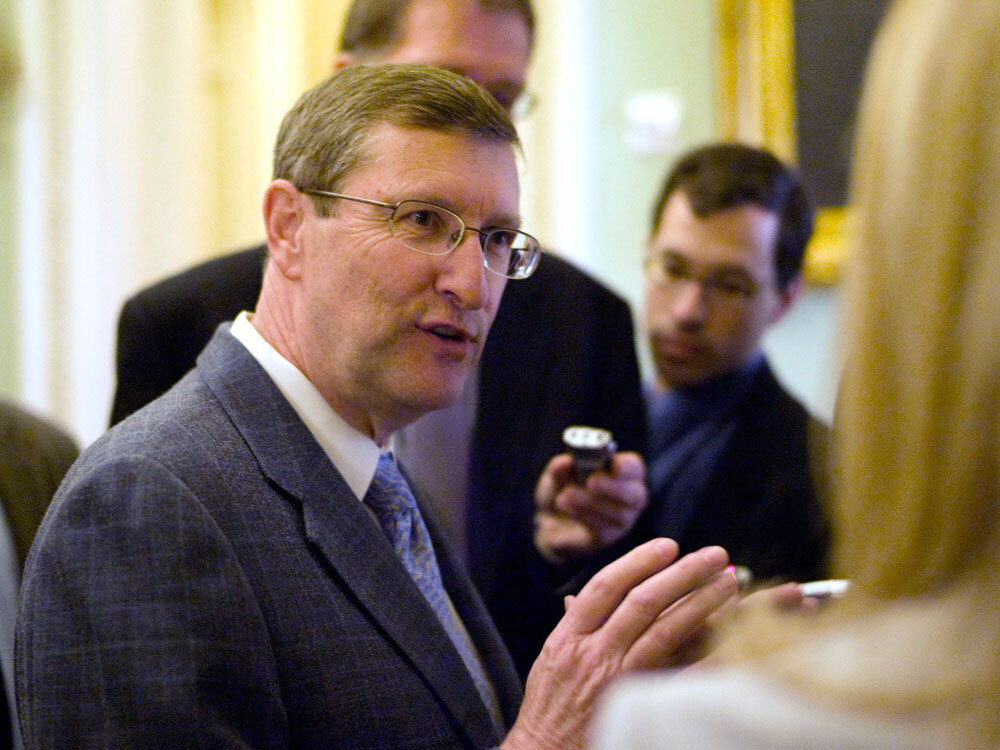 Sen. Kent Conrad (D-ND) has kept a close eye on the cost of the health care proposals and was one of the first Democrats to come out against the public option.

A moderate Democrat, Conrad is a deficit hawk and chairman of the Senate Budget Committee.

According to a preliminary CBO analysis, enacting the leading health care bill in the House would cost more than $1 trillion over the next decade. That estimate is not based on a complete picture of the bill, but Conrad says that the negotiating group in the Senate Finance Committee is focused on proposing something that costs far less.

Instead, the North Dakota senator has angered liberal supporters of a health care overhaul by pushing for health care cooperatives. Conrad says they would be nonprofit, member-owned groups that could theoretically negotiate better payment rates by pulling together a network of health care providers. — Audie Cornish