Accessibility links
Will Kennedy's Death Revitalize Health Care Push? Sen. Edward Kennedy called revamping health care "the cause of my life." Many on Capitol Hill now wonder whether his death will breathe new life into efforts to pass a health care overhaul or force a truce in the debate's heated rhetoric. Others doubt it. 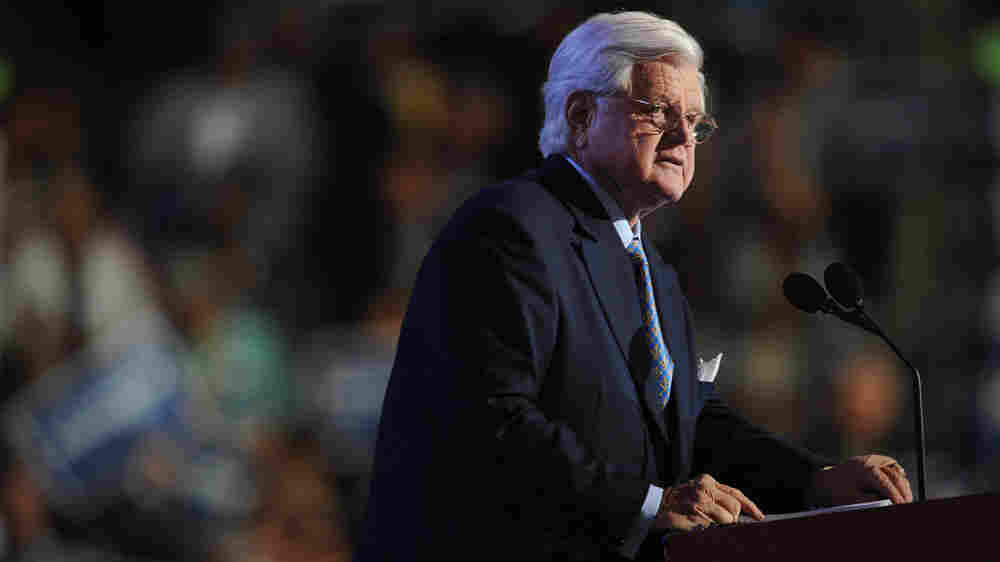 Exactly one year before his death, Sen. Edward Kennedy told the Democratic National Convention that guaranteed health care for every American is the "cause of my life." Robyn Beck/AFP/Getty Images hide caption

Exactly one year before Massachusetts Sen. Edward Kennedy's death from cancer Tuesday, the longtime senator and scion of one the nation's most famous families took a labored walk to the podium at the Democratic National Convention and declared guaranteed health care for every American the "cause of my life."

Indeed, Kennedy's influential work on expanding health care spanned his nearly half-century in Washington: from the 1960s and the establishment of Medicare during the Johnson administration, to the current effort by President Obama to advance a historic overhaul of the nation's health care system.

Many on Capitol Hill are now wondering how or whether the current acrimonious debate over Obama's health care initiative could be affected by Kennedy's passing at age 77.

Will his death mute the heated — and often distorted — rhetoric that has surrounded public discussions on health care and help proponents move a bill forward? Or has Kennedy's public absence from the Hill over the past few months as he battled brain cancer — and the contentious debate that overhaul proposals have inspired nationwide — mean that his influence will quickly pass?

Labor groups, including the Service Employees International Union, the nation's largest, were among organizations that were quick to seize upon the senator's death to urge Congress to pass overhaul legislation in his honor.

"Let us continue his cause," SEIU President Andy Stern said in a morning statement. "Let us take action this year to pass health care reform. And let us continue to build Kennedy's vision of America."

Even those on the other side of the debate predicted that there would be a desire to honor the senator, and an afterglow left by his legacy that could give momentum to overhaul advocates.

"It will provide a burst of adrenaline to proponents of what Kennedy stood for," says Michael Franc, vice president for government relations at the conservative Heritage Foundation. "There will be an emotional plea to make this about Sen. Kennedy — to name the bill after him, to inject the notion of sympathy that this could be done for him."

"They'll hope it can transcend the negative vibes of the past months," Franc said.

But both he and Randel Johnson, a senior vice president of labor, immigration and employee benefits at the U.S. Chamber of Commerce, predict that any benefit to advocates of a health care overhaul will be temporary.

"I don't think it's ultimately going to have any long-term effect," says Johnson, who said he has the "highest admiration for Sen. Kennedy, although we were on opposite sides of the labor issue."

"He's been out of the public debate, and the health care issue is so huge across the country that it has eclipsed one personality," he says. "That doesn't mean that they won't use Sen. Kennedy's passing to add fire to passing the bill."

Will there be a truce in the rhetoric over health care? "No," says Johnson.

His Voice Will Reverberate

But longtime Democratic strategist Kiki McLean, now a partner at the public relations firm of Porter Novelli, argues that, in death, Kennedy's legacy and his passionate voice on health care may get a wider hearing, as news outlets replay his speeches, focus on his biography and talk about his commitment to revamping health care.

"In some ways, we will hear more of his powerful voice this week than we've had the benefit of hearing through his illness," says McLean, who manages Porter Novelli's Washington office.

"The coverage of this week and modern technology will give his legacy even greater influence," she said. "He's going to remind us all — people at town hall meetings, on the Senate floor — where this debate began, and where the real need is."

A Legacy Of People

What will likely prove more influential, some predict, will be the enormous network of staffers, former staffers, supporters and policymakers that were part of Kennedy's close-knit circle.

"When you think of the influence of Sen. Kennedy on health care, some of that was about the senator himself: his personality, his ability to give a good speech," Franc says. "But a lot of the effectiveness he brought to the Senate floor was the function of the incredibly talented staff he brought to the scene.

"They will continue to be involved in shaping this, and his influence will continue in his network — and it's far and wide," he said.

Until recently, Kennedy himself had been very involved in conversations during the development and markup of the bill that came out of his Senate health committee. He was staying in contact "impressively often," according to a Senate aide familiar with deliberations.

One person who may keenly miss the advice of the late senator is Senate Majority Leader Harry Reid, who was close to Kennedy, said the aide, who declined to speak on the record because of the sensitivity of the situation. Reid, no doubt, will feel Kennedy's absence as a bill moves to the Senate floor.

Johnson, of the Chamber of Commerce, is among those who predict that rather than attach Kennedy's name to whatever health bill that may emerge from Congress, his colleagues may choose to name after Kennedy a smaller piece of legislation close to the late senator's heart.

"I think they'll look more closely at a smaller bill that will mark his passing, something like the Healthy Families Act," Johnson says.

First introduced in 2005 and sponsored by Kennedy, the bill would require that businesses employing 15 or more workers provide their employees the opportunity to earn up to seven paid sick days a year. The bill was reintroduced in May.

That, indeed, would become part of his legacy — and, says McLean, "legacy has influence. That's why it's a legacy."

Whether Kennedy's legacy will continue to influence the current national debate over health care will become clearer next month, when Congress returns from what has proven to be a tumultuous, and sad, summer recess.