Accessibility links
Lester Young: 'The Prez' Still Rules At 100 Young, aka "The President of Jazz," was born 100 years ago Thursday. He led a revolution on the tenor saxophone that influenced generations to follow, though he died in 1959. He was Billie Holiday's favorite accompanist, and his robust tenor had an impact on everybody from Charlie Parker to Sonny Rollins.

In the 1930s, Lester Young — known as the "President of Jazz" or simply "The Prez" — led a revolution on the tenor saxophone that influenced generations to follow. He was Billie Holiday's favorite accompanist, and his robust tenor playing influenced everybody from Charlie Parker to Sonny Rollins. Young was famous for his porkpie hat and his hipster language, but he'll always be remembered for his remarkable solos. Lester Young was born 100 years ago Thursday. 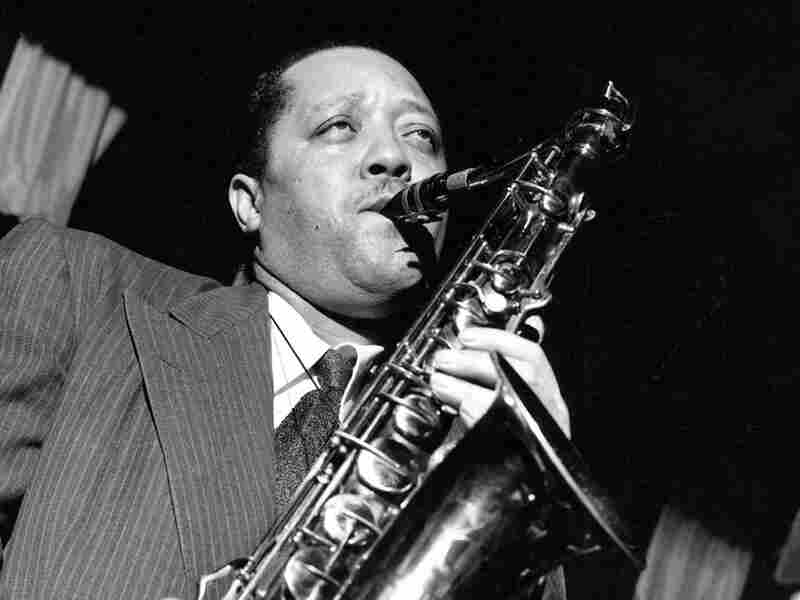 Rather than holding his saxophone vertically, Lester Young held it high and to the right at a 45-degree angle. Herman Leonard/Getty Images hide caption 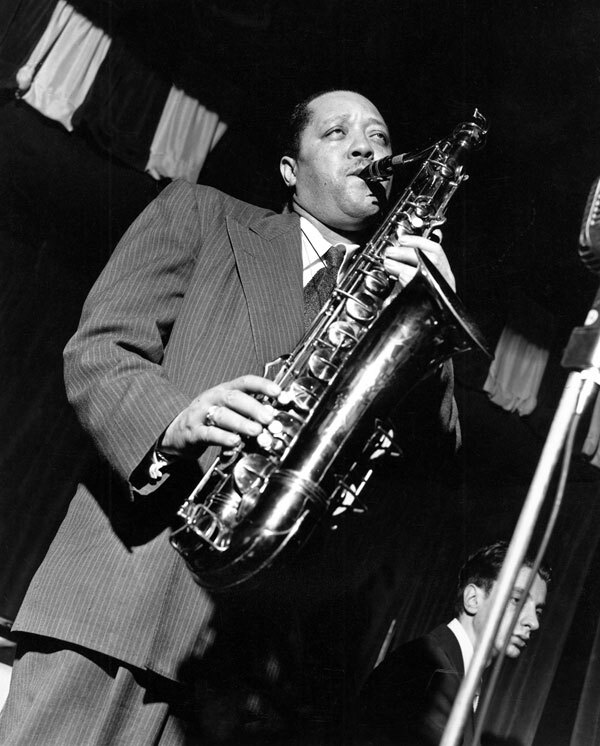 Rather than holding his saxophone vertically, Lester Young held it high and to the right at a 45-degree angle.

In the winter of 1959, French photographer Francois Postif interviewed Young in his Paris hotel room less than two months before the saxophonist died. The recording has been passed around from jazz fan to jazz fan.

In it, Young said that even though he became famous with the Count Basie Orchestra, he didn't like big bands.

"I don't like a whole lot of noise — trumpets and trombones," Young says in the recording. "I'm looking for something soft. It's got to be sweetness, man, you dig?"

Sweetness is what Young was all about. When he started to gain attention, the dominant style of the day was the aggressive, hard-driving saxophone of Coleman Hawkins. But Young played in the upper range of his tenor in a lyrical, relaxed style.

"He had marvelous sensitivity and taste," says Dan Morgenstern, who wrote the book Living in Jazz. "Never played a tasteless note in his life."

Morgenstern, who met Young in 1958, says the saxophonist always told a story in his solos, in an original way.

"He had this 'floating' style, where he would kind of float above the rhythm. He was like an acrobat," Morgenstern says. "And, you know, at the same time, his melodic imagination was so marvelous. The combination of rhythm and melody — nobody else quite ever had that."

Young was an original in other ways. Rather than holding his saxophone vertically, he held it high and to the right at a 45-degree angle. He famously wore a porkpie hat and moccasins. Young also had a flair for language: He said he had "big eyes" for the things he liked, he nicknamed Billie Holiday "Lady Day," and he called women's feet in open-toed shoes "nice biscuits." He also made up new words that found their way into songs.

Young's cachet among hipsters led to his popularizing now-common words. Everyone started using the word "cool" after they heard him say it, according to jazz historian Phil Schaap.

"But the one that really makes the most sense," Schaap says, "you call up Lester Young for a gig, he'd say, 'Okay, how does the bread smell?' So he used 'bread' for money for the first time."

Serving In The Army

Lester Willis Young was born in Woodville, Miss., on Aug. 27, 1909. His father Willis played several instruments and taught all of his children to play. When he was 18, Lester left the family vaudeville band and moved west, ending up in Kansas City with Count Basie.

By the time World War II started, Young was a jazz star. So he expected his military service to be spent entertaining the troops, like the white musicians in the bands of Glenn Miller and Artie Shaw. But the government drafted Young into the "regular Army."

"He was just another soldier, and he was going to do what they told him to do, and he refused," drummer Jerry Potter said.

Potter was stationed at Fort McClellan, Ala., in the fall of 1944 when Young arrived for basic training. Thirty-five years later, Potter recalled that Young didn't want to cut his hair, didn't want to sleep in a barracks and refused to wear Army boots.

"He didn't need basic training, because he was never going to fire a gun," Potter says. "You see, that's another thing. He never wanted to fire a rifle. 'I don't want to kill anyone. I want to play and make them happy.' "

Young was court-martialed for using marijuana. His Army experience was traumatic, and it inspired his composition "D.B. Blues," for "detention barracks."

Young drank heavily for the rest of his life. Nevertheless, he continued to tour and record a lot. Some critics say his playing was never as strong after the war, but others argue that his ballads possessed more emotional power.

Throughout his life, Young struggled with racism, from the Jim Crow laws his family faced in the 1920s to the way he felt the Army treated him.

"They want everyone who's a negro to be an Uncle Tom, Uncle Remus and Uncle Sam, and I can't make it," Young said. "But it's the same way all over. You just fight for your life, you dig? Until death do we part. You got it made."

Young is said to have drunk himself to death on his final tour of Paris in the winter of 1959. He died when he was just 49, yet his spare, lyrical sound inspired everyone from the more frenetic be-boppers to the cool jazz players. But his greatest legacy lives in the stories preserved in his solos.