Accessibility links
Ardent Polemic On Behalf Of Passion Cristina Nehring's A Vindication of Love makes an engaging case for raw attraction — where lust, emotion and intellect converge. Feminism, Nehring argues, has given us innumerable opportunities. Now how about the right to be romantic?

Ardent Polemic On Behalf Of Passion

Ardent Polemic On Behalf Of Passion 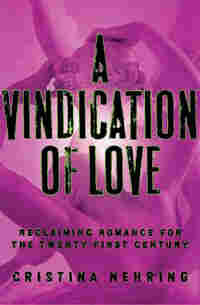 Nowadays a woman can claim just about anything as a badge of feminism. She can pursue a career, raise a child, or both; maintain a stable of lovers, marry, or both; serve in the military; sit on the Supreme Court; stay home and keep house; or take off her clothes for money. Short of infanticide, it's difficult to conceive of any act that doesn't fall within the big tent of women's liberation.

Yet as Cristina Nehring observes in her sharp new polemic, A Vindication of Love, there is still at least one way to be instantaneously and conclusively stripped of feminist credentials — and that is to act impulsively, irrationally or self-destructively out of passion for a man.

This bias, Nehring shows, flows one way. She recounts in fascinating detail the entanglements of literary men and women, making the case that Dante, Stendahl, Sartre and countless other male writers in thrall to voracious, obsessive desires tend to be considered deep, while female scribes seeking the same kind of pleasure become objects of contempt. Feminism has perpetuated, if not actually fed, the notion that "women who go after challenging men have bad self-esteem" when in fact the opposite is often true.

Consider, Nehring says, Mary Wollstonecraft. The author of the groundbreaking 1792 treatise Vindication of the Rights of Women was branded a tramp and a hypocrite because her love affairs led her to question marriage, wander the globe and even attempt suicide. For many years after her death, Wollstonecraft's personal life cast such a shadow over her reputation that women's rights advocates viewed her more as a liability than an asset, despite the rigor of her writing. 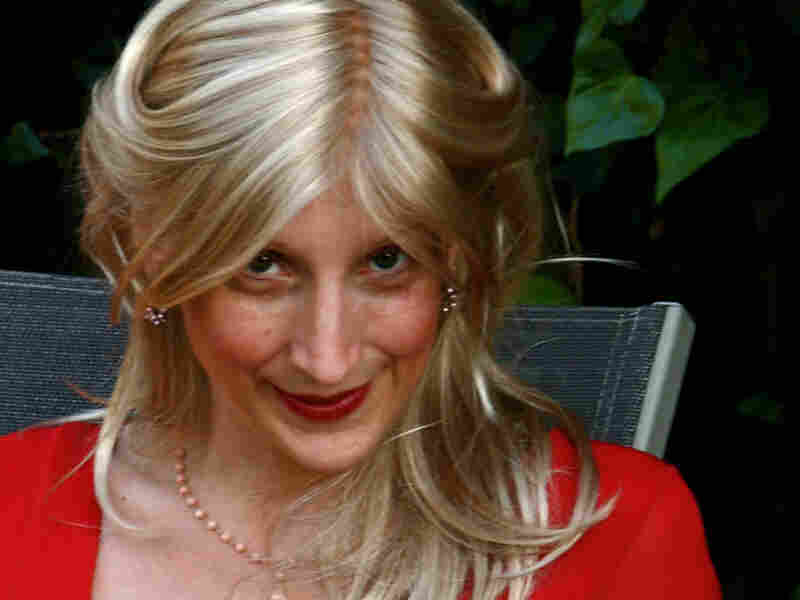 Cristina Nehring's essays have appeared in The Atlantic Monthly, Harper's and the London Review of Books. Russell Jacoby hide caption 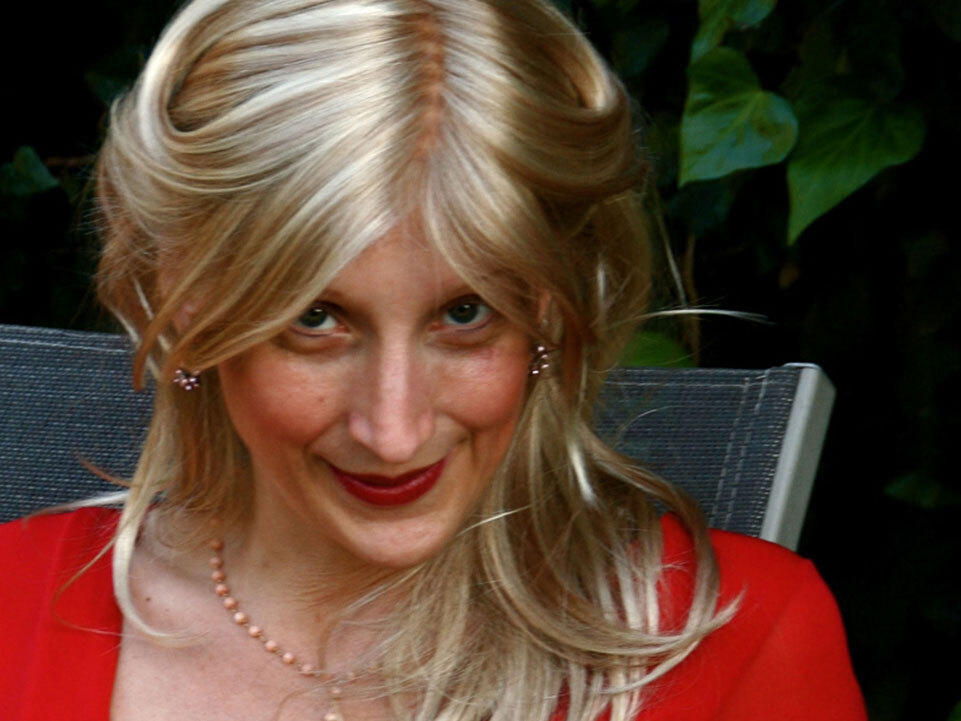 Cristina Nehring's essays have appeared in The Atlantic Monthly, Harper's and the London Review of Books.

Other female thinkers, too — Simone de Beauvoir, Emily Dickinson, Margaret Fuller, Edna St. Vincent Millay — have been called before the feminist tribunal and been found wanting, to the detriment, Nehring charges, not only of passion and romance, but rigorous thought itself. "Acute feelings attend acute intellects," she says, hotly. "Big emotions belong to big personalities." "It is not the worst or weakest people who provoke the biggest disasters. Oftentimes it is the strongest, the halest, the healthiest." So, yes, Wollstonecraft "was extraordinarily vulnerable — but also extraordinarily powerful."

Anyone who's run, crazed and breathless, into a love affair that threatened her sense of self and derailed her focus may question Nehring's contention that devoting one's life to passion bolsters creativity and sharpens the mind. What's more, the author's defense of passionate feeling as a valid feminist and intellectual choice is so wide-ranging and inclusive — Cleopatra garners praise for her manipulative withholding, Dickinson for the expression of her anxious, reclusive longings, St. Vincent Millay for juggling many men at once — that it's difficult to know exactly what, in the end, she advocates.

Still, A Vindication of Love makes an ardent and engaging case for attraction in its rawest form — where lust, emotion and the intellect converge. Feminism, Nehring acknowledges, has given us innumerable opportunities. Now how about the right to be romantic?

Excerpt: 'A Vindication Of Love'

One need only compare the discussion of famous women who have made unconventional amorous choices with that of famous men who have done the same thing. The first is embarrassed or contemptuous; the second reverential and poignant. What a man is that! we incline to think, when an artist of the male persuasion dotes upon an apparently undistinguished woman: How lustrous his soul must be to lend a sheen to this dull coin! Don't worry, Ralph Waldo Emerson enjoins us, if your bright spirit gives sparkle to an unworthy object: You are "enlarged by [your] own shining."

These are bold words. They are also easy words to say for Ralph Waldo Emerson. As a nineteenth-century gentleman, he could indeed have adored anyone he wished — from his maidservant to the queen of England — without being diminished in the eyes of his contemporaries. The woman who was perhaps his most important intellectual companion had no such luck. Margaret Fuller was the leading member of the Transcendentalist Movement, a fearless war reporter, history-making journal editor, and possibly the first woman in American history to make her living writing. Yet she died an ignominious death because of her choices in love. If her survivors forgave her the passionate flirtation she conducted for many years with Emerson, they did not forgive her the consummated love she had for a dodgy Italian aristocrat whose wealth had disappeared and whose years were substantially fewer than Fuller's own. Because of Giovanni Ossoli, Fuller's tragic death in a shipwreck on the way back from Italy to her home in Massachusetts in 1850 was welcomed by many who considered themselves her friends.

"If Margaret had lived, there would have been a thousand cares for her to encounter," said her brother. Grief for the young woman was "tinctured with selfishness," therefore. "Margaret's euthanasia," was what an old friend called the catastrophe at sea: "It was manifest that she was not to come back to chilled affections. There was no position for her" in the world any longer. Her reputation had been destroyed by her last year's association with a man some took for a gigolo. It did not help that she and Ossoli had an infant boy on board with them when the ship capsized, whose birth — in or out of wedlock — was disputed.

But it was not the child who caused Fuller's shame: It was the man himself. Eleven years her junior (unheard of in nineteenth-century Boston), he was not, as Fuller was, an intellectual; he had fallen, moreover, on hard times. He lacked cash. It was an embarrassing match by any New England standard and a staggering number of onlookers esteemed Fuller's drowning in the Atlantic Ocean at age forty as a tender mercy.

Compare this to the drowning, only twenty-eight years earlier, of another literary figure: Percy Shelley. The Romantic poet had lived a life of considerably greater debauchery than had Margaret Fuller — and had made visibly more disastrous romantic choices. Before he became the husband of Mary Shelley (whom he betrayed and who did not attend his funeral), Percy had already married a sixteen-year-old called Harriet Westbrook, a sweet and unsophisticated girl whom he abandoned (along with his infant child) by the time she turned nineteen and who committed suicide immediately afterward. Shelley and his friend Byron went through inappropriate young girls as though they were tarot cards on a deck. Constantly they found themselves holding the crossbones of death. Wives, girlfriends, and illegitimate children died in droves. The hangers-on of the Shelley and Byron show as they traveled through Italy together were almost always unequal to their male protectors — and unprotected by them.

Yet Percy's death when it occurred — like Fuller's on the water — was full throatedly lamented in his native England: The entire populace mourned the death of "the best and least selfish man."Shelley's fatal infatuation with the Harriets of his life was chalked up to his imaginative soul as it always is when great men make unexpected romantic choices. His irresponsibility was forgotten first and forgiven after. Meanwhile, Margaret Fuller was the object of calumny for many decades, deemed an idiot, a false feminist idol, a sorry pool of hormones. This, because of an amorous choice that her contemporaries did not understand — a single love that they considered blind.

Text excerpt from A Vindication of Love copyright 2009 by Cristina Nehring and HarperCollins, used with permission from Twelve. 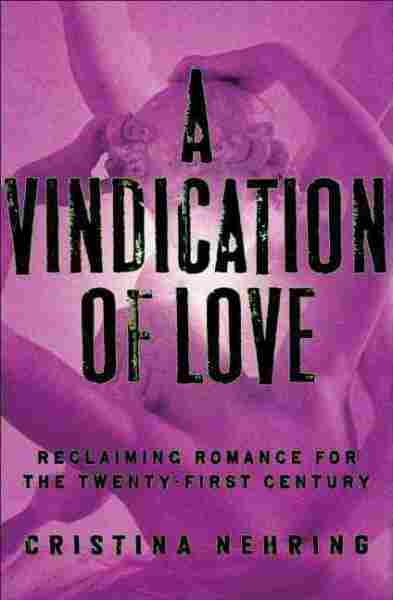 A Vindication of Love

Reclaiming Romance for the Twenty-first Century