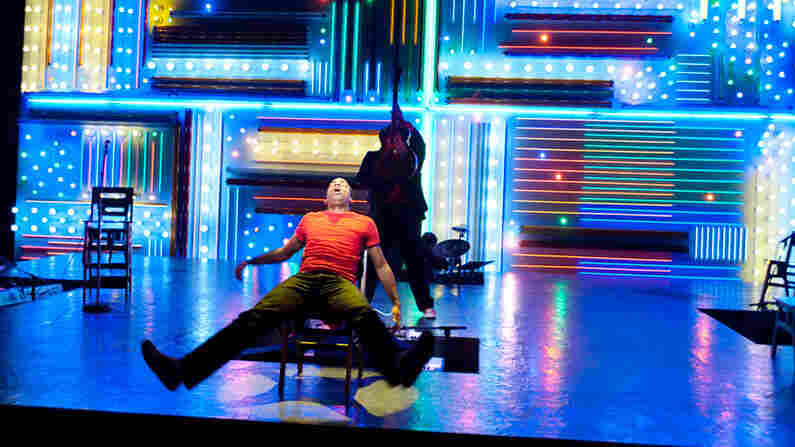 'Music Is The Freight Train In Which I Travel'

'Let's Get Some Culture'

Who cares about Broadway musicals these days? Well, Spike Lee, for one — or, anyway, he cared enough about Passing Strange, by the singer-songwriter who goes by Stew, to turn it into a strikingly original stage-to-film hybrid. Audiences are lucky he did.

Stew is a large African-American man — red shirt, black suit, appealing voice and ingratiating as all get-out. Which is a good thing, because he's the star, the creator, the narrator and the chief subject of this unorthodox musical, which got terrific reviews and seven Tony nominations on Broadway but couldn't quite manage a six-month run.

As someone who didn't go to see Passing Strange on Broadway and who now, having seen Lee's cinematic rendering, feels like an idiot for passing it up, I can tell you only that nothing I read prepared me for the show's exuberance and vibrancy.

I've re-read the reviews that didn't sell me, and they pretty much told it like it was. And I've no illusions about my own writing. I'm going to miss the essence, too, but at least in the clips over there on the left, you can see and hear a bit of the show's vividness and theatricality.

The story is simple — "African-American Candide looking for 'the real' " about sums it up. But it's funny and moving, and most of all, it really pops in the onstage telling. And miraculously, that's still evident on screen as Stew narrates, and the actor Daniel Breaker plays his younger self.

Plays him a little against the grain, as it happens. You'd think having your elder self narrate your own story would protect you from mockery, but as Stew puts it late in the show, "You know what's weird? You wake up one morning and realize that your entire adult life is based on a decision made by a teenager. A stoned teenager."

So expect a twist or two in the coming-of-age tale as a middle-class Los Angeles teenager (Breaker) grows up to be a singer-songwriter. His route takes him from church choir to punk band to sexual liberation in Amsterdam to an artistic straitjacket in a Berlin arts commune — a hell from which he emerges with an epiphany. 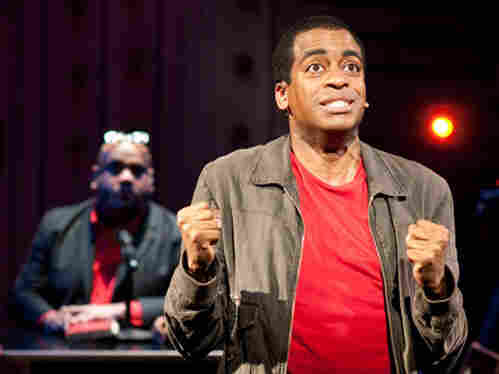 After Passing Strange closed on Broadway, Breaker moved on to a bigger, more mainline show — playing the Donkey in the stage musical of Shrek. David Lee/Sundance hide caption

At every turn in that twisting path, Stew provides a musical style to match — gospel, blues, punk and toe-tapping show music. And his collaborators — co-author Heidi Rodewald and stage director Annie Dorsen — provide an impressive array of staging tricks, to which Spike Lee adds considerable sizzle on screen.

The director filmed two performances on Broadway, then shot it again without an audience present, the better to capture close-ups and offbeat camera angles. The cast is knocking itself out, and the strikingly edited result is theater magnified, amplified, brought to a kind of life that doesn't usually happen with filmed performances.

I should admit right here that I'm a theater nut, so this particularly appeals to me. And I should also note that in passing on Passing Strange, boy was I wrong — and boy am I glad it passed my way again.