Accessibility links
Will Japanese Power Shift Change U.S. Relations? Japanese voters ousted the party that's ruled the country for most of the past half-century. The party that's taking power is signaling that it wants changes in its military and economic relations with the U.S. 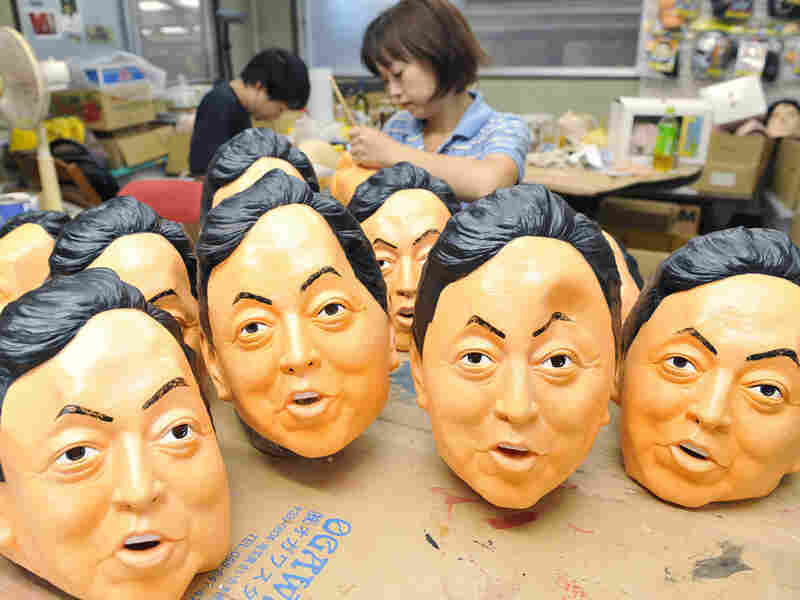 One measure of Yukio Hatoyama's popularity in Japan is that the Ogawa Rubber Co. has begun making masks with his likeness. Hatoyama is in line to become the next prime minister with the expected election victory Sunday of his Democratic Party of Japan. Yoshikazu Tsuno/AFP/Getty Images hide caption 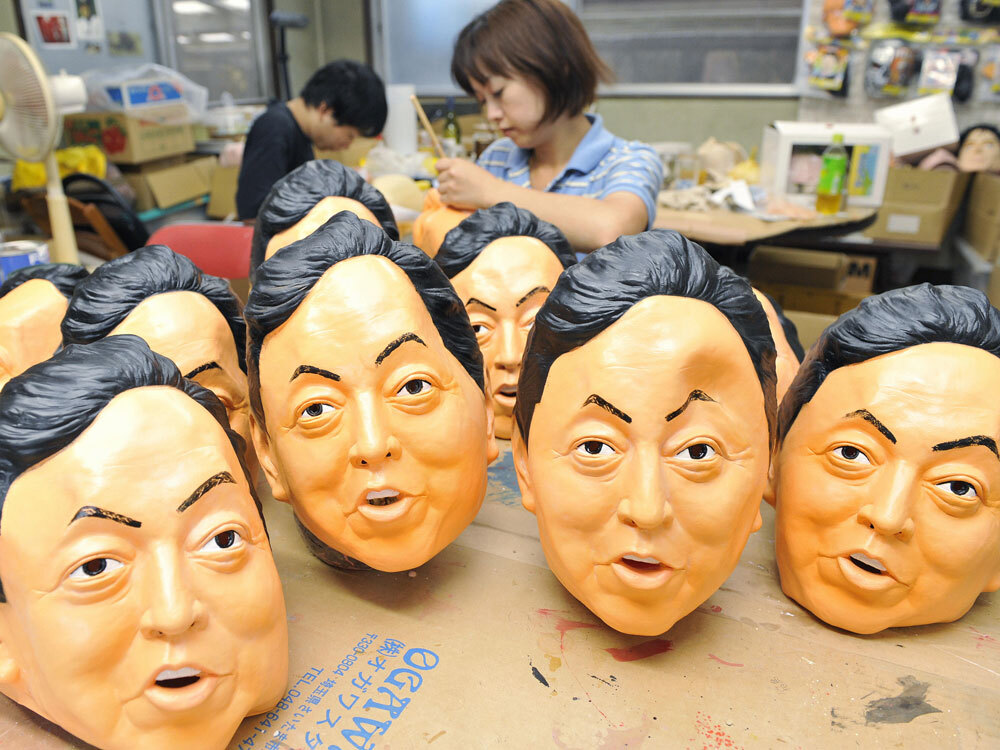 One measure of Yukio Hatoyama's popularity in Japan is that the Ogawa Rubber Co. has begun making masks with his likeness. Hatoyama is in line to become the next prime minister with the expected election victory Sunday of his Democratic Party of Japan.

The party that guided postwar Japan through impressive prosperity and then into persistent economic stagnation lost parliamentary elections Sunday in a vote that could signal significant changes in U.S.-Japan relations.

Japan's Liberal Democratic Party, which for a half-century enjoyed near total political domination, has helped define the U.S. relationship by providing bases for American troops and strong ties between U.S. and Japanese markets.

The Democratic Party of Japan, won in a landslide Sunday, campaigned on a promise to create a foreign policy that is more integrated with its East Asian neighbors and more independent from the United States.

While the strong U.S.-Japan relationship is not fundamentally threatened, a victory for the DPJ presents a different stance from the more conservative LPD, which has generally supported U.S. political and economic goals around the world. 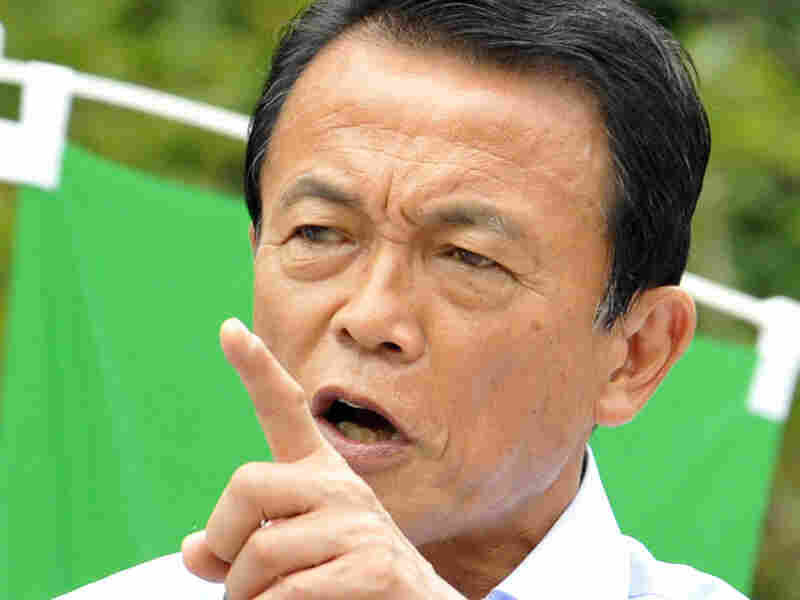 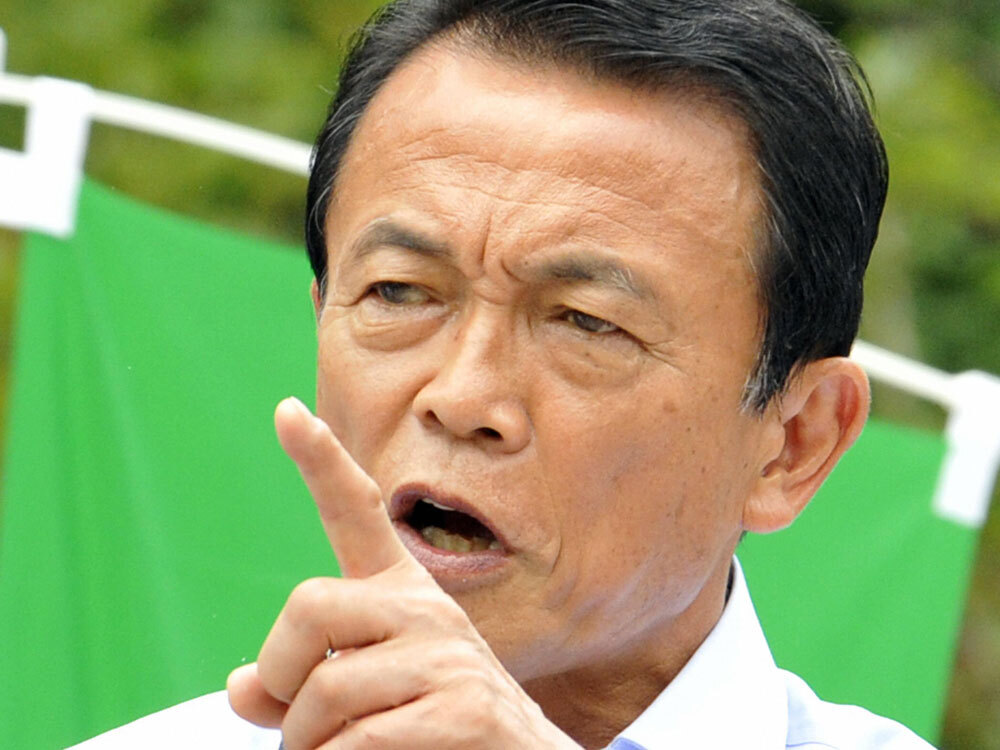 The Democratic Party leader, Yukio Hatoyama, signaled some of his party's planned changes in international economic policy in a commentary Thursday in The New York Times. Hatoyama denounced what he called "market fundamentalism in a U.S.-led movement that is more usually called globalization."

Hatoyama argued that globalization ignores human dignity, and said his administration would work on people-oriented policies that "take greater account of nature and the environment, that rebuild welfare and medical systems, that provide better education and child-rearing support, and that address wealth disparities."

Sheila Smith, a senior fellow for Japan studies at the Council on Foreign Relations, says Hatoyama's article should serve as a wake-up call to the Obama administration to be ready for a new Japanese approach that could show itself as early as the G-20 economic summit in Pittsburgh in late September.

Leaders from the world's major industrial countries will use the meeting to discuss the global financial crisis. Japan may not be as willing to go along with solutions that the new ruling party regards as promoting unrestrained, American-style capitalism. 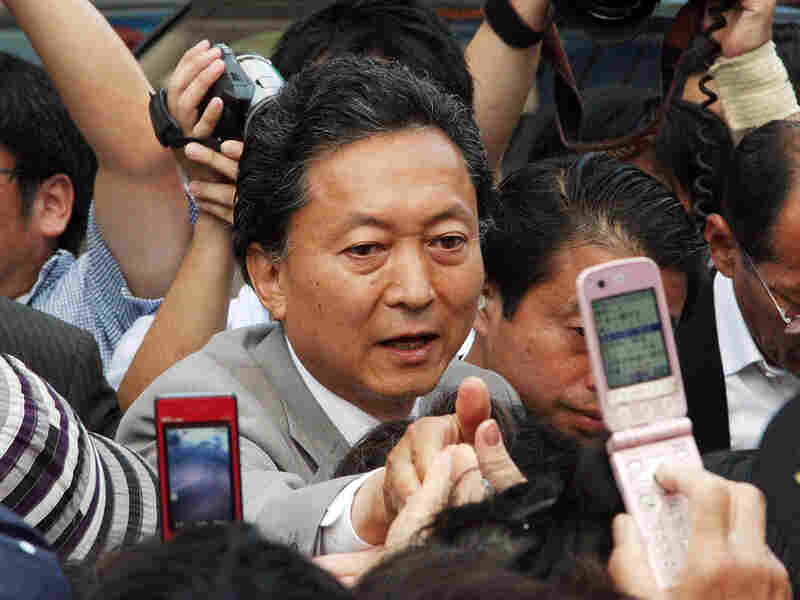 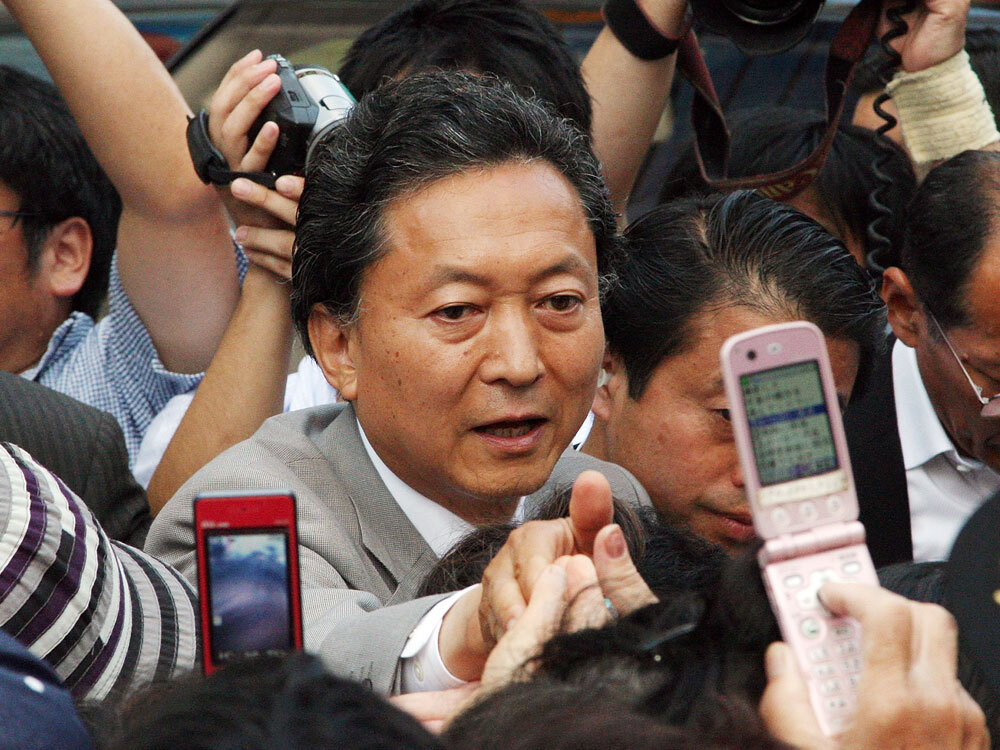 Yukio Hatoyama, head of the Democratic Party of Japan, campaigns ahead of Sunday's parliamentary elections.

Smith says a big victory by the DPJ in the 480-seat lower house of parliament means that the party could have a relatively free hand in implementing its policy goals.

"Three-hundred-plus seats means we'll have a DPJ government for at least the next three to four years," Smith says.

But domestic issues, not foreign policy, would likely dominate the agenda of the new government in the first few months, some analysts say.

The party campaigned on promises to spend heavily on domestic items such as family services, education and income support for farmers at a time when the country already faces a massive deficit.

"I don't see any big changes in foreign policy right away," says Nicholas Szechenyi, a Japan expert at the Center for Strategic and International Studies in Washington, D.C.

Smith says a DPJ victory could also lead to changes in Japanese security policy, including the status-of-forces agreement that lays out how U.S. military forces can operate on Japanese soil. Japan hosts about 47,000 U.S. troops.

One potential dispute centers on how much Japan should pay of the cost of relocating a U.S. Marine base from Okinawa to Guam, a move that is supposed to be completed by 2014. U.S. bases in Okinawa have been a source of controversy for years because of disputes over land and a series of violent crimes committed by U.S. troops.

Under an agreement in 2006, Japan would pick up more than $6 billion of the estimated $10 billion cost of the relocation, mainly for building new housing for the Marines in Guam. DPJ leaders have said that is too much.

In his New York Times opinion piece, Hatoyama stressed that he wants Japan to take a more integrated role in East Asian affairs and align more closely with China and South Korea. But he added that Japan's alliance with the U.S. would "continue to be the cornerstone of Japanese diplomatic policy."

How Much Can The DPJ Deliver?

Even with a decisive win Sunday, it remains to be seen whether Hatoyama can bring the kind of change his party is promising. The 62-year-old Stanford-educated engineer has a reputation for being wooden and lacking charisma .

The DPJ has promised to reduce the power of Japan's entrenched bureaucracy and restore more policymaking power to elected politicians, a task that Smith says won't be easy, given Japan's parliamentary system.

The Liberal Democratic Party was formed in the mid-1950s and has ruled uninterrupted except for a defeat in 1993. Then, it returned to power after less than a year.

"People don't come in and out of the bureaucracy the way political appointees do in the U.S.," Smith says. "As an institution, that means the bureaucracy is stronger and more elite, and it has been tightly wedded to the LDP."

Szechenyi says Hatoyama would like to centralize power in the prime minister's office, but that could be a delicate balancing act, "because to a certain extent, the DPJ is going to be dependent on the bureaucracy to help it function."

A bigger challenge is that the DPJ is a fractious party, composed of a spectrum of politicians ranging from socialists to disgruntled former members of the LDP. "Some people in the DPJ have been suggesting that the U.S.-Japanese relationship won't change at all, and then you've got Hatoyama writing that op-ed," Szechenyi says.

"I think the No. 1 priority for a Hatoyama government is just going to be getting used to governing," Szechenyi says. "It's going to be a very quick transition from campaigning to being in charge."