Accessibility links
Retail Analyst: Consumers Benefit From Layaway Retail analyst Howard Davidowitz says the economy has forced many retailers to again offer layaway. Most retailers had stopped because it was not economical for them. Davidowitz tells Ari Shapiro that layaway has some advantages for consumers — but they better make sure they will be able to make the final payment, or they will lose the money they already have paid into the item.

Retail analyst Howard Davidowitz says the economy has forced many retailers to again offer layaway. Most retailers had stopped because it was not economical for them. Davidowitz tells Ari Shapiro that layaway has some advantages for consumers — but they better make sure they will be able to make the final payment, or they will lose the money they already have paid into the item.

For more on this trend, we turn to retail analyst Howard Davidowitz. He says layaway has some advantages for the consumer.

Mr. HOWARD DAVIDOWITZ (Retail Analyst): It is a very good program, as long as you can make the final payment. If you can't, you will forfeit the money that you paid, and there may also be an additional $10 fee. So that yes, it is a very good deal. It's growing in a few areas. It's really not that big. There is a site, eLayaway.com that claims they're doing very well and a thousand retailers are participating. At the end of the day, there's really only about seven or eight retailers doing layaway in a big way. Most retailers have actually stopped doing layaway.

Mr. DAVIDOWITZ: Well, it wasn't economical for the retailer. Because, see, the retailer has got to take the merchandise, take it off the floor, put it into a stock room. It's all this handling, processing. The customers comes in, pays $3 every week. It was a messy business. Most retailers - by the way, including Wal-Mart - did not find it profitable and gave it up. Right now, Wal-Mart does not do layaway, only on jewelry only.

SHAPIRO: And yet from what I understand, a company like Kmart, actually, has a huge increase in people doing layaway on small-ticket items.

Mr. DAVIDOWITZ: That absolutely right. But if you look at Kmart, they're a train wreck. They're closing stores. So if you look at who's doing this, I mean, that may tell you something. I don't want to say it's an act of desperation. Let's put it this way: Very few of the top retailers are doing it. Of course, you've got T.J. Maxx, Marshalls. They're very good operators. They're doing it. But yes, it does show the desperation and weakness on the part of the American consumer.

SHAPIRO: I can understand people, you know, putting down $50 this week, $50 next week for a big-ticket item like a refrigerator. But when you're talking about pens and pencils, something that costs a few dollars.

Mr. DAVIDOWITZ: Let's talk about it and let's talk about the reality of half of America. We're in a bifurcated society. Now, if the kid needs a pair of denim and a pair of sneakers to go back to school, that becomes a crisis. It's important to get the sneakers because he's got to have them. He doesn't want to look terrible, so that couple of dollars means everything.

SHAPIRO: Well, yeah, I was going to say, typically, when people don't have money for a small item that they want to buy, they just put it on their credit cards. You're saying things are so bad that a credit card is no longer even an option for many people.

SHAPIRO: Howard Davidowitz is a retail analyst in New York City. Thank you. 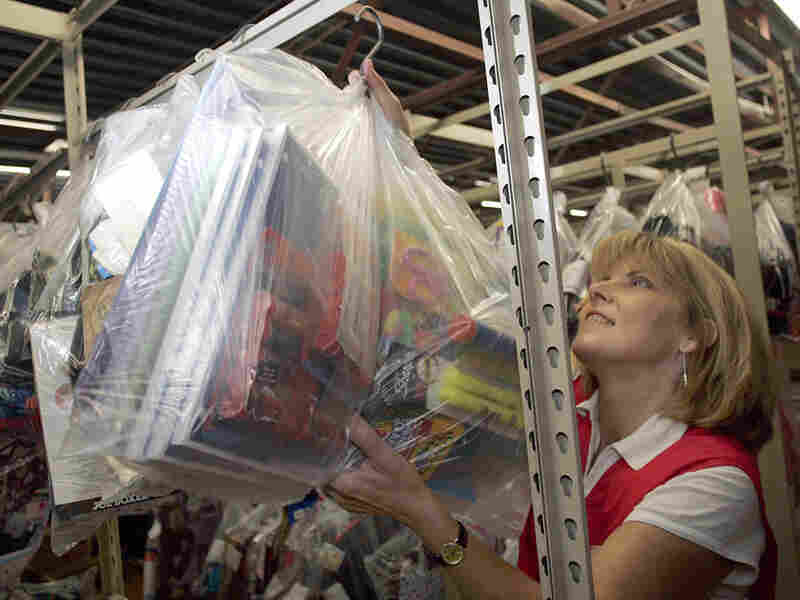 Tammy Wyatt, a specialist at Kmart in Conover, N.C., hangs a bag containing back-to-school supplies that a customer has put on layaway. Nell Redmond/AP hide caption 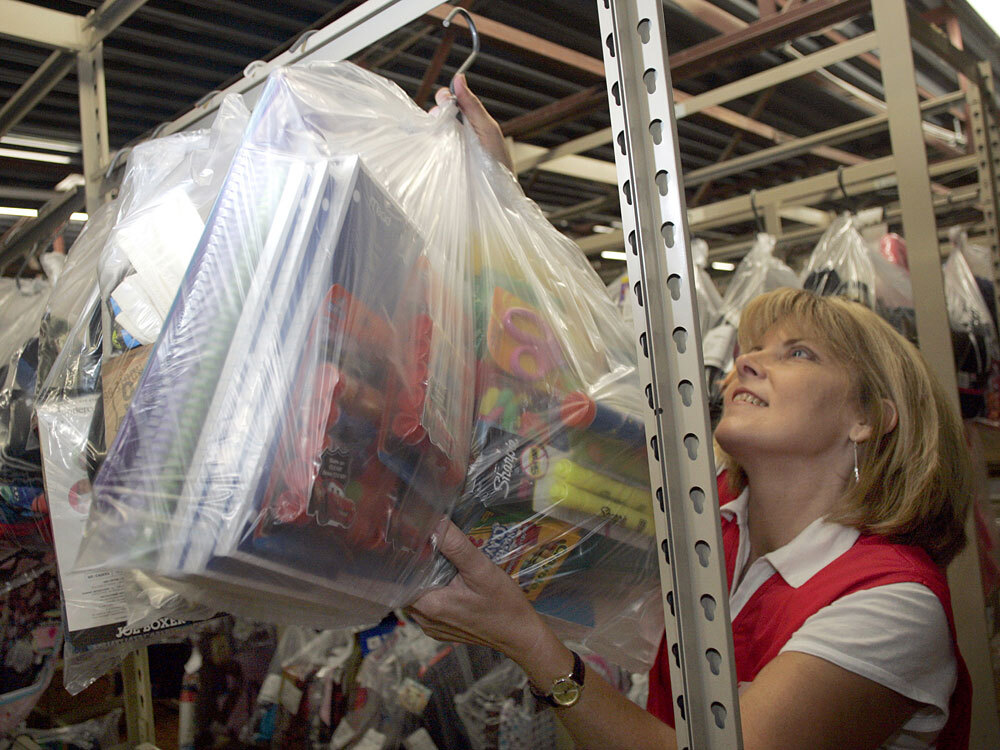 Tammy Wyatt, a specialist at Kmart in Conover, N.C., hangs a bag containing back-to-school supplies that a customer has put on layaway.

For years the service was a staple of department stores that helped cash-strapped customers reserve merchandise and then pay it off later. But layaway, replaced by easy consumer credit, largely faded away by the 1990s.

Today, credit cards are maxed out, and struggling retailers have resurrected layaway to get shoppers back in the aisles. Sears is once again offering layaway, and Kmart, where the service was never discontinued, is giving the idea a fresh push with a new national ad campaign.

In one TV ad, a woman is putting her back-to-school items in layaway and boasts to a friend that she likes "to plan ahead."

Jack Zahora Reports On The Resurgence of Layaway

At a Marshalls store in Arlington, Va., Nicole Renman was also planning ahead. She listed off the items going into layaway. For a small down payment, she will put them on reserve and pay them off later, either in one lump sum or in installments.

"Bedsheet, household items, children's clothing, socks, shoes," she said. "You name it. Everything's in there."

Renman said she's afraid of falling behind on her credit card payments, but layaway is easy.

"You don't have to put your money upfront, right away," she said.

There is a small catch, however. If a customer doesn't pay off the item, he or she can usually get a full refund but will be charged a penalty for not following through.

Howard Davidowitz, a New York-based retail analyst, said layaway is growing in some areas, but only about seven or eight retailers have gone back to it in a big way because for most of them it doesn't make economic sense.

"It's all this handling [and] processing," he told NPR's Ari Shapiro on Morning Edition.

"The customer comes in, pays $3 every week. It was a messy business, [and] most retailers, including Wal-Mart, did not find it profitable and gave it up."

The fact that any of the big retailers have gone back to layaway says a lot about the sorry state of the American consumer, Davidowitz said.

"I don't want to say that it's an act of desperation, but it does show desperation and weakness of the American consumer," he said.

It used to be easy for consumers to just charge even small items on their credit cards. But now the cards are at their limit or have been canceled, he said.

"Now, if the kid needs a pair of denim and a pair of sneakers to go back to school, that becomes a crisis. So, that couple of dollars means everything," he said.

"What it says is that the consumer is under enormous stress. If you're out of money and you're out of credit, layaway is a way to get something," he said.

Meanwhile, Renman, the Marshalls customer, said she is already laying away items for Christmas.