Accessibility links
The New Republic: Obama's Bromance During the 1990s, New York Times columnist David Brooks was closely identified with national-greatness conservatism. But these days, the center-right Brooks frequently seems more sympathetic toward Obama than the liberal Paul Krugman. How did this happen? 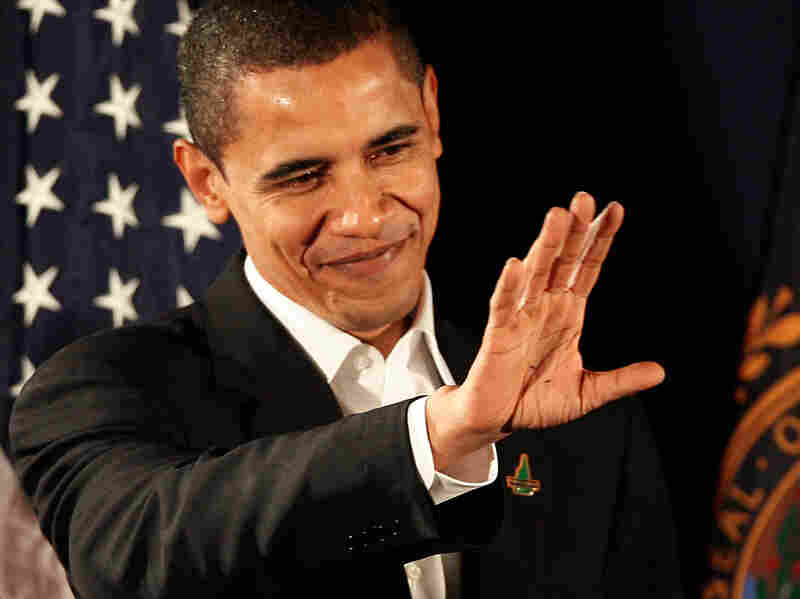 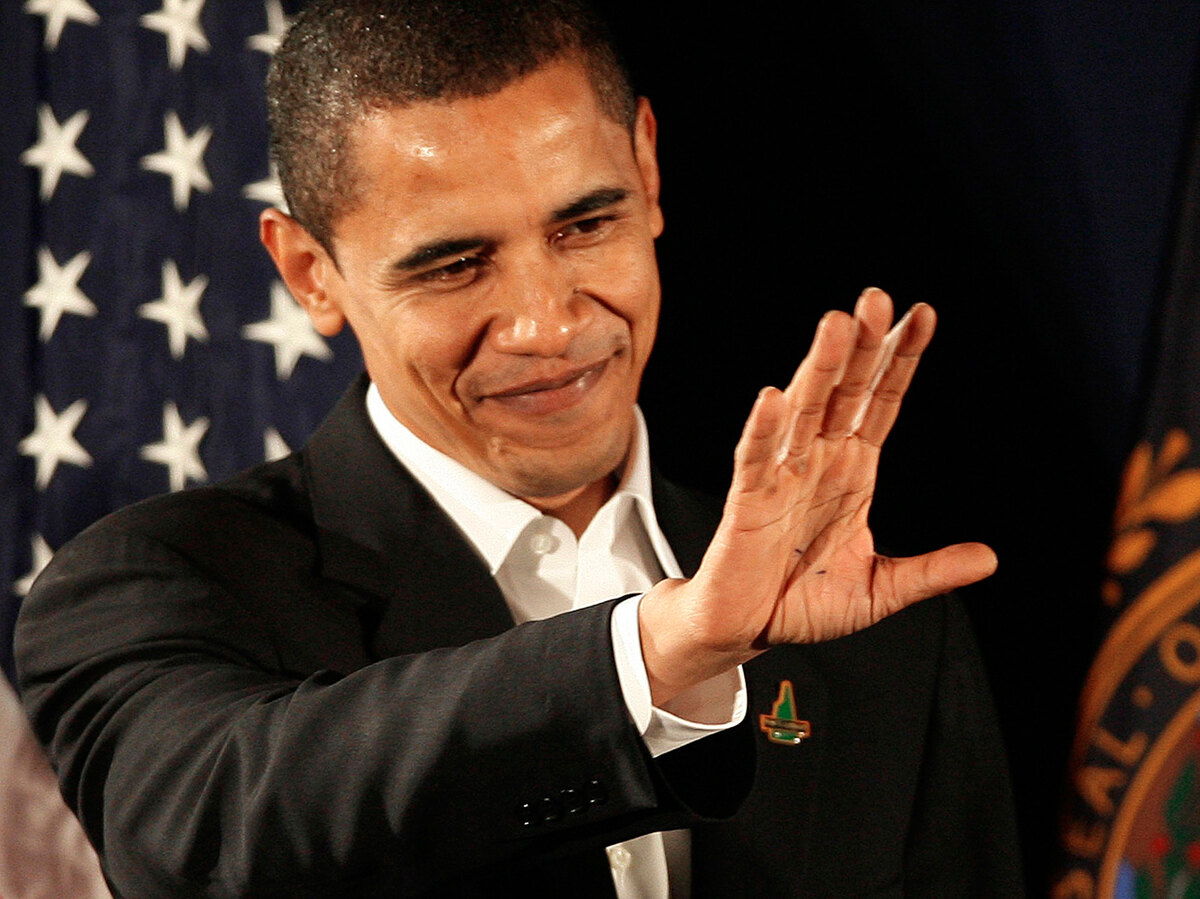 In the spring of 2005, New York Times columnist David Brooks arrived at then-Senator Barack Obama's office for a chat. Brooks, a conservative writer who joined the Times in 2003 from The Weekly Standard, had never met Obama before. But, as they chewed over the finer points of Edmund Burke, it didn't take long for the two men to click. "I don't want to sound like I'm bragging," Brooks recently told me, "but usually when I talk to senators, while they may know a policy area better than me, they generally don't know political philosophy better than me. I got the sense he knew both better than me."

That first encounter is still vivid in Brooks's mind. "I remember distinctly an image of--we were sitting on his couches, and I was looking at his pant leg and his perfectly creased pant," Brooks says, "and I'm thinking, a) he's going to be president and b) he'll be a very good president." In the fall of 2006, two days after Obama's The Audacity of Hope hit bookstores, Brooks published a glowing Times column. The headline was "Run, Barack, Run."

These days, the center-right Brooks frequently seems more sympathetic toward Obama than the liberal Paul Krugman. He has written columns praising Obama's Afghanistan policy, education proposals, and economic team. Even on broad areas of disagreement--deficit spending, the sprawling stimulus bill, health care reform--Brooks tends to treat Obama and his administration with respect. "My overall view," Brooks told me, "is ninety-five percent of the decisions they make are good and intelligent. Whether I agree with them specifically, I think they're very serious and very good at what they do." It is an odd situation to say the least: David Brooks, prominent conservative, has become the most visible journalistic ally of arguably the most liberal president of his lifetime.

How did this happen? During the 1990s, Brooks was closely identified with national-greatness conservatism--a set of ideas that he touted in a widely discussed cover story for The Weekly Standard--which, in turn, was closely linked to the insurgent McCain campaign of 2000. But, whereas McCain and Bill Kristol (Brooks's boss at The Weekly Standard) eventually put aside the bitterness of that primary contest and returned to the loyal Republican fold, Brooks has kept a certain distance from movement conservatism. "David is a conservative who is motivated by a deep distrust of ideology," former Bush speechwriter Michael Gerson, a Brooks friend, says. "That is a strain of conservatism. It puts him in a position where he's not taking views simply because they fit a party line." Indeed, at Obama's much-talked-about January dinner with conservative pundits--hosted by George Will and attended by cnbc's Larry Kudlow, Washington Post columnist Charles Krauthammer, and Wall Street Journal editorial-page editor Paul Gigot, among others--the president greeted Brooks by asking, "What are you doing here?"

Brooks concedes that his place on the political spectrum has shifted somewhat over the years. "I used to think conservatives were right about the big things--the Soviet Union, economic growth," he explains. "Now, on a lot of issues, I think liberals have been right about some big things, like rising inequality. Both sides of the education divide are within the Democratic Party. ... The Republicans are sitting this one out. And, then, the war in Iraq has caused me to rethink things in a much more modest [way], and that is Burkean, too."

He recognizes something similar in the current president. "Obama sees himself as a Burkean," Brooks says. "He sees his view of the world as a view that understands complexity and the organic nature of change." Moreover, after the Bush years, Brooks seems relieved to have an intellectual in the White House again. "I divide people into people who talk like us and who don't talk like us," he explains. "Of recent presidents, Clinton could sort of talk like us, but Obama is definitely--you could see him as a New Republic writer. He can do the jurisprudence, he can do the political philosophy, and he can do the politics. I think he's more talented than anyone in my lifetime. I mean, he is pretty dazzling when he walks into a room. So, that's why it's important he doesn't fuck this up."

White House officials have gone out of their way to cater to Brooks recently. Take Obama's senior adviser, David Axelrod, whose career Brooks kept a close eye on after he graduated from the University of Chicago in 1983 and took a job at the City News Bureau, a Chicago wire service. At the time, Axelrod was the lead City Hall reporter for the Chicago Tribune. "I followed his career because he was who I wanted to be," Brooks told me. "He was a hero." The two finally crossed paths in 2004, when Axelrod was working for John Edwards. And, this April, as the keynote speaker at The Week magazine's opinion awards ceremony--where Brooks was honored-- Axelrod showered the columnist with praise, calling him a "serious public thinker" in an era of "insipid, instant commentary and one-hour news cycles."

Last month, I met Brooks for lunch at Equinox, a few blocks north of the White House. That morning, he had published an unusually harsh column criticizing what he saw as Democratic overreach on health care and the stimulus. Already, he had heard from administration officials complaining about the piece. But "they're always nice," Brooks said, adding, "It's never, 'You're a complete asshole.'My line is, the Clinton people would tell you you're a complete and total asshole. The Obama people say, 'We love you. You're a great guy. It's sad you're a complete and total asshole.' They're always very mature about it."

A similar thing happened in early March, when chief of staff Rahm Emanuel called Brooks to complain about that morning's column criticizing Obama's spending programs; later in the day, the White House sent over a chart showing that spending was, in fact, holding to historical norms. Brooks told me that Obama had personally signed the chart "Dear Comrade Brooks." In June, The Washington Post reported that Emanuel had arranged for Obama to "drop by" a briefing Brooks attended. "I feel like I can call anybody," Brooks says of his access to top White House officials such as Emanuel, Axelrod, and Office of Management and Budget head Peter Orszag. "With Bush, there were months when I was in favor, and months when I was out of favor. Here, you can write whatever you want; you don't notice any diminution. If I call Rahm or Orszag or Axelrod, they're happy to talk."

Brooks isn't blind to the fact that the White House goes out of its way to flatter him. This spring, he told Charlie Rose, "David Axelrod walks into a meeting with me, carrying the Reflections On The Revolution In France by Edmund Burke. They're not without manipulation." It's easy to understand why the administration does this. Brooks's sympathetic columns help to validate the key myth of this White House: that it is fundamentally post-partisan. Plus, Brooks appeals to a major Obama constituency: the latte-sipping Baby Boomers who were the subject of his 2000 best-seller Bobos in Paradise. These were among Obama's strongest supporters in the last election, but their loyalty could be tested by spiraling deficits, botched health care reform, or a flagging economy.

As much as any columnist, Brooks speaks to these left-of-center suburbanites. After all, he is known for attracting liberal readers who normally can't stand conservative pundits. "I get a lot of people who say, 'I'm a liberal and you're the only one I read,'" Brooks says. "Sometimes, it can be a little condescending. ... But you take the readers where you can get them. I do wish more people walked up to me and said, 'I'm a conservative and I love you.' But, mostly, they don't read the Times."

Is There Actually Reason to be Excited About the Upcoming Israeli-Palestinian Peace Talks? by Shmuel Rosner

What Does Anti-Semitism Have to do with the Development of Critical Theory? by Adam Kirsch

Why Obama's Middle East Outreach is Not Working, by Marty Peretz

Are Speculators Really to Blame for Rising Oil Prices? by Zubin Jelveh