Accessibility links
U.S. Trains Ex-Sunni Militias as Iraqi Police In Anbar province, west of Baghdad, the Iraqi government is struggling to bolster its police forces. Newly created security teams include former members of Sunni tribal militias who were linked to the insurgency. Now the Americans are training them. 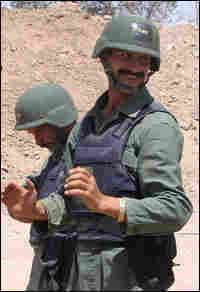 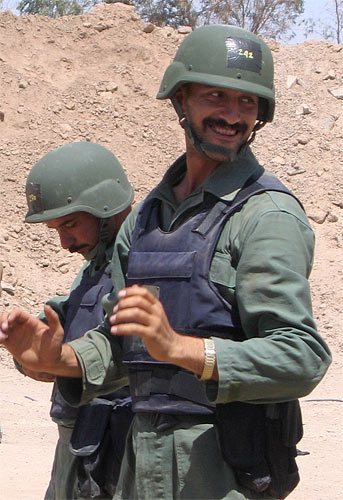 Qosai Abid (right) is a squad leader in the Iraqi provincial security force in Fallujah. 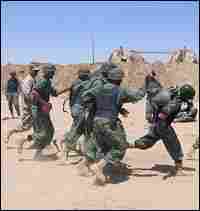 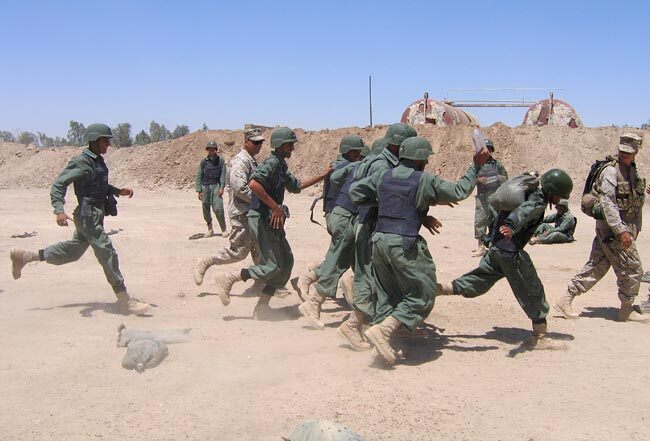 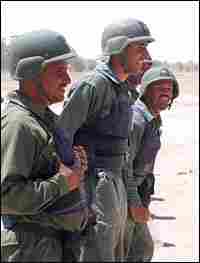 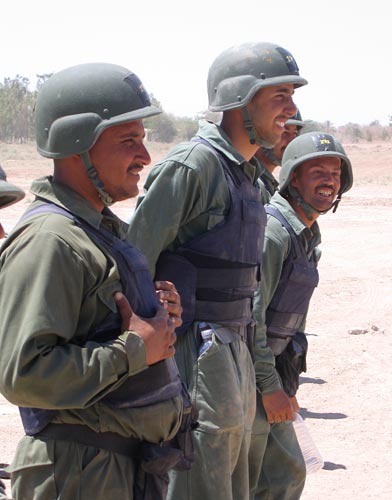 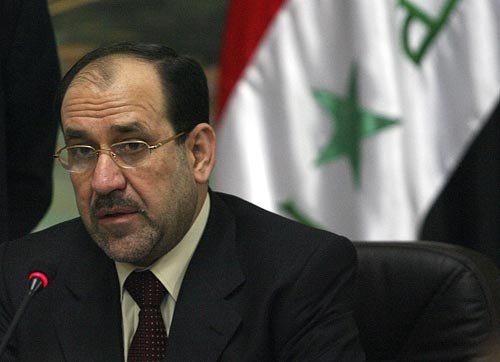 In Iraq's Anbar province, west of Baghdad, thousands of men have signed up to become police. But there aren't enough academies to train them. So instead, the national government has sanctioned the creation of extra neighborhood security teams made up largely by former Sunni tribal militias who now support U.S. forces.

On an open dirt field just a few miles outside the U.S. base in Fallujah, about 50 Iraqi men dressed in dusty green uniforms march in formation while their Iraqi drill leader shouts instructions.

They're part of the new provincial security force in Anbar province, trained by U.S. forces. The men line up and listen to an explanation of the day's drill — an obstacle course and firing exercise. Nearly all the men in this class are from the same tribe — the Jumali — and these teambuilding exercises are meant to leverage that bond.

One of the trainers, Marine Sgt. Tony Storey, addresses the troops.

"What I require from you as a platoon is that you get out and you support these men because they are a member of this team, of this family," he tells them. "You understand?"

They form two lines and with a shot in the air, the race is on.

The six competitors run down the field, pick up a sandbag and sprint back, while their platoon mates and trainers cheer them on. Their faces are caked with a mixture of sweat and dust kicked up by the sweltering summer wind.

A lot of these trainees were in the police or the army under Saddam Hussein. Some were part of Sunni tribal militias that until recently were linked to insurgent groups fighting U.S. forces. Most were recruited by local Sunni sheikhs who now have agreed to help American troops fight al-Qaida.

Qosai Abid is a 30-year-old father of two from Fallujah. For years, he and his family lived in fear of the killing and banditry that insurgents waged on his community. Abid says the sheikhs made the right move.

"The tribes have joined hands to fight terrorism against the injustice that was rife in this area," he says. "And now with God's will, we will join them and we will be the front armor to help secure this entire region."

U.S. officers in Anbar say these provincial teams are becoming the eyes and ears of U.S.-led counterinsurgency efforts, helping identify militants in their local communities.

"They know exactly what these guys look like, where they're from," Chief Warrant Officer Thomas Vasquez, who helps oversee the training program. "They know who belongs and who doesn't."

He compares the teams to the police reservists back home in the United States.

"They'd fill out the shifts as an auxiliary," Vasquez says. "So that as missions come up they are also tapped into that, so these guys do get a good bit of action, actually."

For now, these men get only eight days of training and at the end of it, they get to keep their gun and their uniform. The idea is that eventually this second-string police force will go through the full training at the Anbar police academy, which opened a few weeks ago.

Developing the Iraqi police has been a top priority for U.S. forces.

Col. Richard Simcock, who commands a combat regiment based in Fallujah, says the police are "my exit strategy."

"It's just like home," he says. "If you woke up in your hometown and saw the National Guard walking up and down your street, you'd know that things aren't good. Same here. They don't want to see Iraqi army in downtown Fallujah. They don't want to see coalition forces in downtown Fallujah. But if you see a police officer on the corner, that's a good thing."

But getting a professional police force up and running has been difficult. There is a lot of talk in Anbar about corruption within the police force. The governor of the province says the police are unreliable and operate with their own agendas. As of now, there are 21,000 police for all of Anbar province, which is roughly the size of the state of Utah.

Simcock says that until more police academies are built, the alternative is to use these provincial security teams made up of untrained Iraqis with a history of shady alliances.

"I think it's a short-term fix," he says. "But I think it is a fix in a time of crisis to get more people involved, legally, through a justified system in lieu of making them police because we don't have enough academies to pump them through that way."

Iraqi Prime Minister Nouri al-Maliki has criticized American efforts to augment the police force. He says the U.S. is arming Sunni militias that could easily turn against the coalition and Shiites, and stir up sectarian violence. U.S. commanders here insist that's not the case and that these troops are committed to fighting al-Qaida.

Abid says his wife questioned his decision to join the U.S. effort out of fear for his safety.

"I told her that terrorism is over and, with God's help, we will finally be happy," Abid says. "Injustice cannot last forever. What lasts is justice and commitment."

U.S. forces are hoping that commitment lasts long enough for Iraqi security forces like these to stand on their own so that, eventually, coalition forces can stand down.