Accessibility links
Finally, A Resting Place For Michael Jackson Michael Jackson died more than two months ago, but the King of Pop is finally being buried this week. At Forest Lawn in Glendale, Calif., he will be surrounded by fellow performers, such as Nat King Cole, Humphrey Bogart and Sammy Davis Jr. 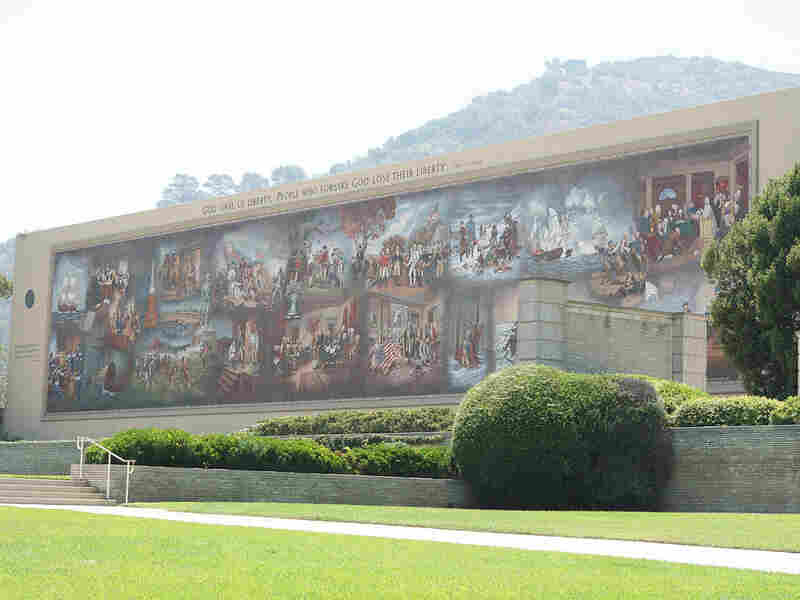 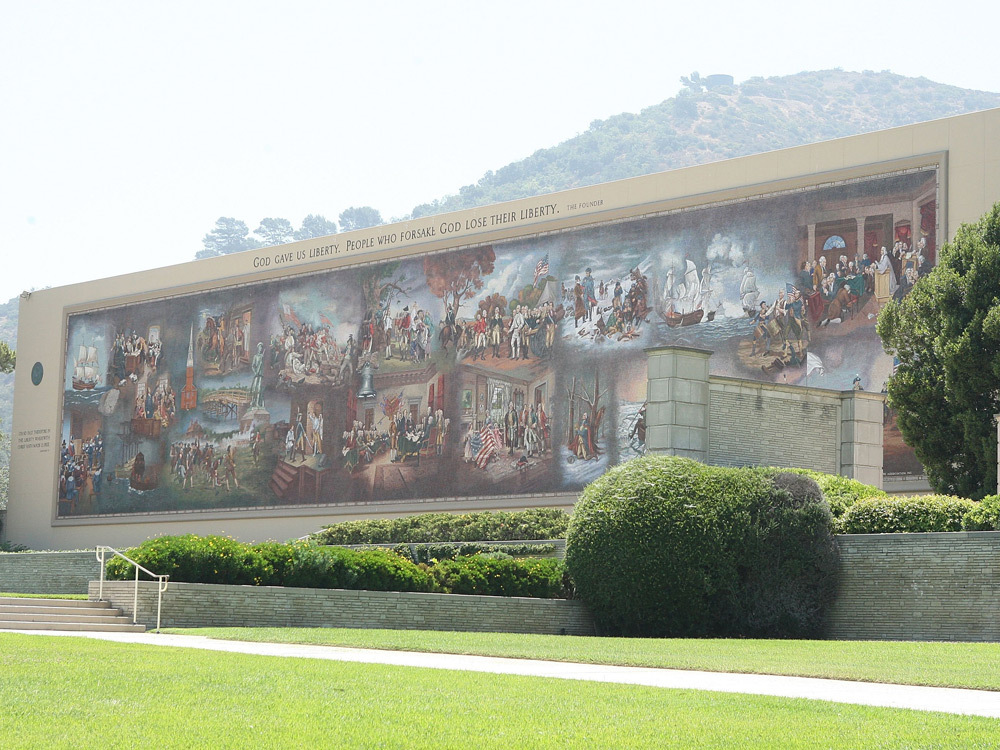 A view inside Forest Lawn cemetery, where pop star Michael Jackson will be buried.

Michael Jackson died more than two months ago, but the King of Pop still has not been buried.

There have been multiple autopsies, as well as public and private memorials. Finally, this week, comes the actual funeral — during which Jackson will be laid to rest in a legendary graveyard.

Sammy Davis Jr. has a private garden crypt in Forest Lawn, shaded by 100-year-old oak trees. It's one of the spots where you need a special key to open tall bronze gates.

Privacy is one of the reasons the Jackson family chose Forest Lawn. The cemetery's spokesman, William Martin, is so circumspect he doesn't even admit famous people are buried here.

"It's Forest Lawn policy not to publicize people that have come to us. It's something that we choose not to do out of respect for the privacy of the families," he says. 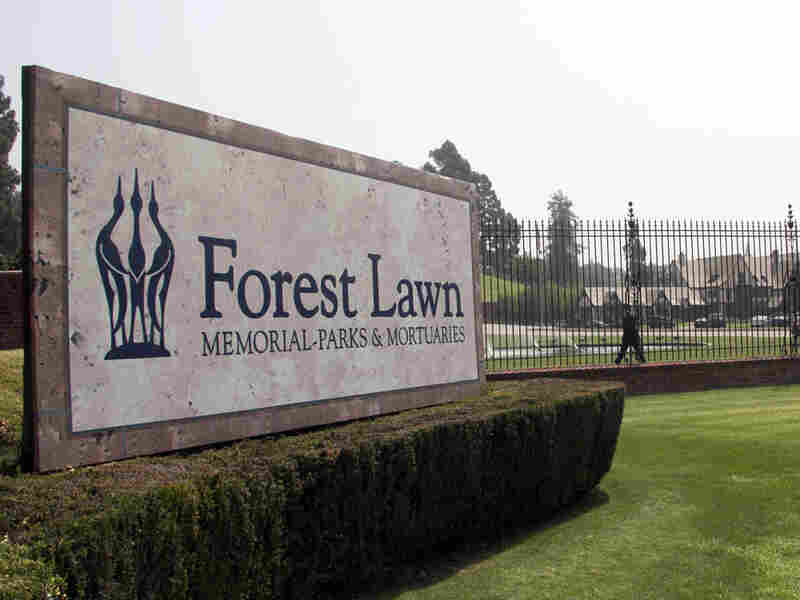 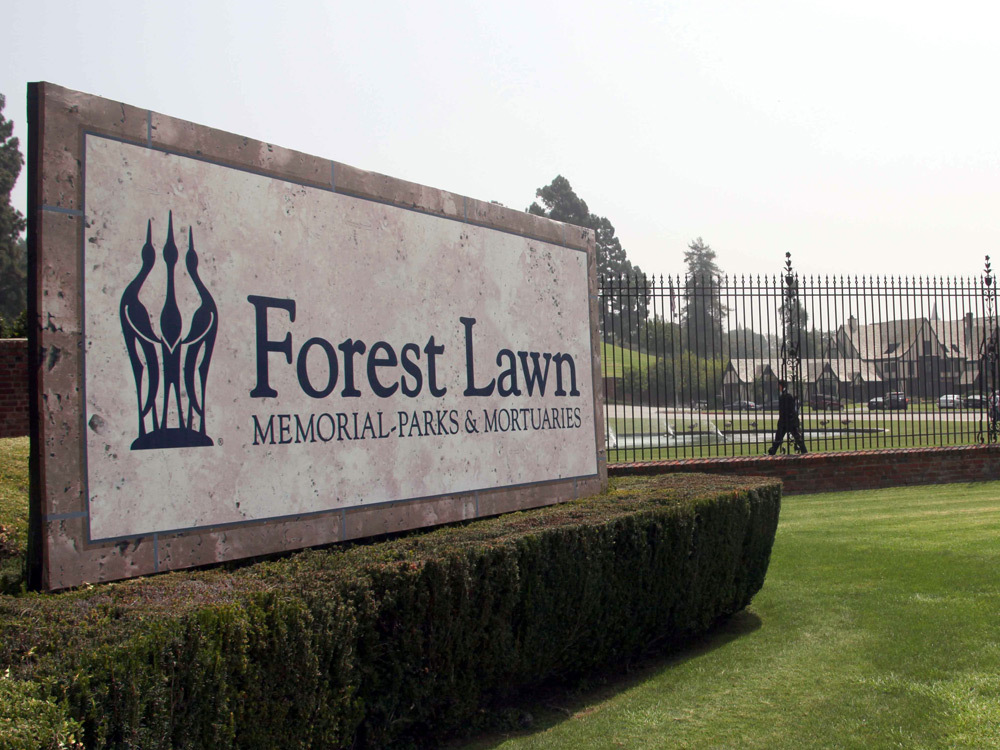 The entrance to Forest Lawn cemetery in Glendale, Calif.

But much of the world already seems to know that Jackson is coming to the cemetery. Is Forest Lawn worried about what that may mean?

"I get asked that question a lot," Martin says. "Many families call up and are concerned that Forest Lawn will change and become something they didn't come to us for ... initially."

What they came for is peace and privacy — something that Martin says won't change even after Jackson is laid to rest. The cemetery will remain open for the public to enjoy — to wander down its shaded pathways and to admire the reproduction masterpieces scattered throughout the grounds and buildings.

Forest Lawn's lavish surroundings have inspired satires — sometimes acerbic, such as writer Evelyn Waugh's, and sometimes more gentle, as in the lyrics to a song written by Tom Paxton and performed by such artists as John Denver:

I want to go simply when I go
They'll give me a simple funeral there, I know.
With a casket lined in fleece
And fireworks spelling out rest in peace
Oh, take me when I'm gone to Forest Lawn!

'Disneyland Of The Dead'?

Since it was created in 1906, Forest Lawn has been something most cemeteries are not — a tourist attraction. Martin says the reason is the art — it houses reproductions of some of the world's great works.

But there's no denying the allure of Forest Lawn's star-studded census of permanent residents. A whole culture exists in which people visit the graves partly in homage, partly as history detectives.

His colleague, Lisa Burks, who writes a grave-hunting blog, says it's the perfect place for Jackson and his family.

"You can't do better than Forest Lawn if you want to have a secure, private place, and I think [Jackson's mother] Katherine and the kids need to have that," Burks says. "And so in that instance, I'm very glad that he's here, and I hope that he gets to stay here for as long as she needs him to be here."

With its beautiful things and great performers, Forest Lawn could provide Jackson in death something he rarely found in life: a place to fit in.