Accessibility links
Scientists Have Big Hopes For Tiny Lasers Researchers say they have produced the world's smallest laser — a thousand times smaller than the diameter of a human hair. Scientists hope they can be used to create even smaller and faster electronics and to study human cells. 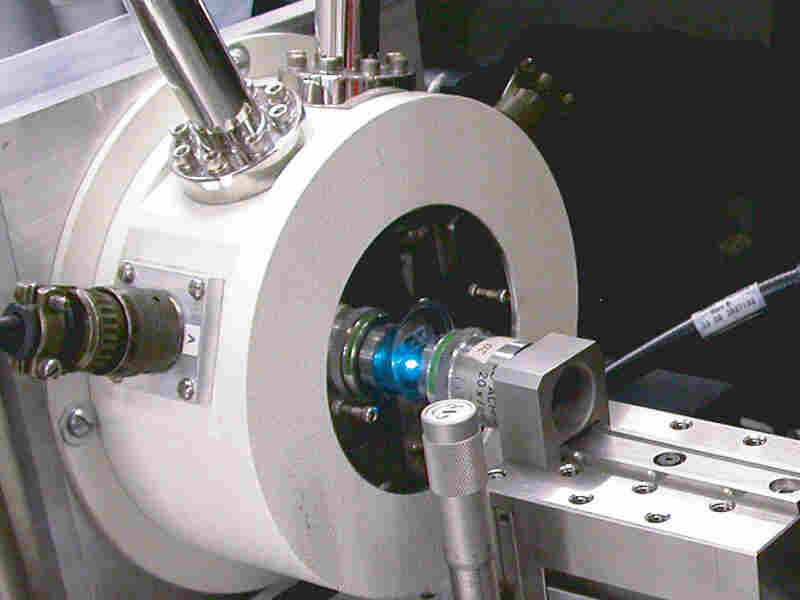 This bright blue point of light comes from a laser so small that you can't even see it under a microscope. The spot looks larger than it is because the light is being scattered. Courtesy Xiang Zhang Lab hide caption 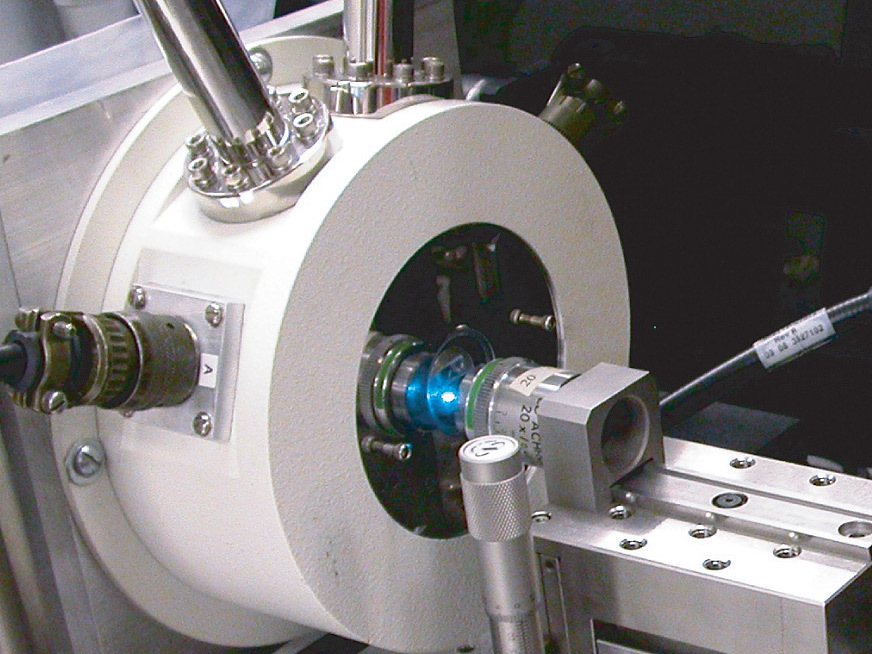 This bright blue point of light comes from a laser so small that you can't even see it under a microscope. The spot looks larger than it is because the light is being scattered.

Researchers say they have built the world's smallest laser — one a thousand times smaller than what's available today. And today's lasers are already small enough to fit on a computer chip.

These new types of lasers open up all sorts of new possibilities for new technologies. And they break down the conventional wisdom about how small lasers can be.

Standard theory has it that lasers can only be miniaturized so far, because to create a laser beam, the light literally bounces around inside of a chamber. Since a light wave has a certain length, it essentially needs room to turn around. But six years ago, Mark Stockman at Georgia State University started thinking outside the box.

"I got an idea to create a laser whose size is not limited to conventional limitation of laser," he says.

Stockman realized that a rapidly vibrating electron, sitting on the surface of a tiny piece of metal, could actually produce laser light.

"This is a nanopendulum, basically. It can be confined to almost any small place."

In 2003, Stockman issued a challenge to the growing field of nanotechnology: figure out how to build these vibrating electrons, or nanopendulums, in real life. They're called plasmons, by the way.

Many research groups took up the challenge, and in the past few months, three have declared victory. One is a team that includes Mikhail Noginov at Norfolk State University in Virginia. They made a plasmon laser out of a bead of gold that's so small you can't even see it under a regular microscope — it's just 44 nanometers across.

"For comparison, the thickness of a human hair is 50 micrometers. So our device is about a thousand times smaller than that," Noginov says.

He didn't just build the world's smallest laser for bragging rights. Lasers on this scale can produce tiny light sources, which in turn can help scientists capture images of tiny things we really care about, like the molecules inside our bodies.

But the biggest potential here may be a new generation of computers. They could be 1,000 times faster than computers today, but of course they would have to be wired into a chip.

"If you want to use it in electronics, you want to attach it with wires to the rest of the circuit," Noginov says.

And that's the challenge. It's not so easy to accomplish using Noginov's free-floating bead of gold. But other research groups are hot on that trail. One is in the Netherlands. Another group, led by researcher Xiang Zhang, is at the University of California, Berkeley and published a new paper in Nature Sunday. His group's current nanolaser can, in theory, be put right on a computer chip.

"All the processes we are using here are already used in semiconductor manufacturing," Zhang says. "So I wouldn't think it would take too long to reach real application — maybe a few years."

And those real applications could include future generations of computer storage. Today's lasers can burn a whole movie onto a DVD. And, Zhang says there's plenty of room for improvement.

"For example, you can use this to make a very high-density DVD recorder. You may be able to store an entire library on one disk."

Of course the most exciting thing about new technologies is you never know where they will lead.